The McLaren Artura is green in more ways than one 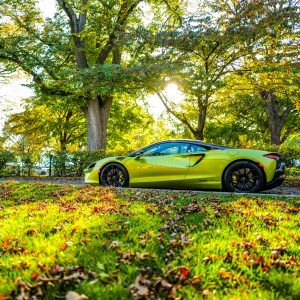 It’s fitting that one of the signature colours for the Artura, McLaren’s latest mid-engined, carbon-fibre supercar, is an electric, almost luminescent shade called “Flux Green.” Bright colours are nothing new for supercars, especially ones as dramatic-looking as the Artura. But the green is symbolic here as well as eye-catching ­– a sign of the new McLaren’s credentials as a plug-in hybrid as well as a supercar. 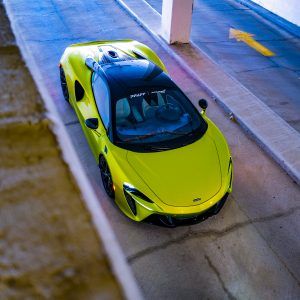 There is plenty here to please the supercar traditionalist. The Artura is low, long, and wide, with big 19- and 20-inch wheels and an aggressive stance. The front and sides are punctuated by big air intakes. Two huge exhausts poke from the mesh on the rear end. And the trademark McLaren “face,” featuring a set of boomerang-shaped LED lights, leaves you in no doubt about what kind of car you’re looking at. 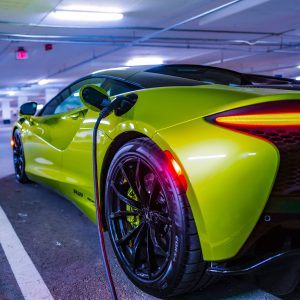 The Artura, however, is also more elegant than previous McLarens – its design, while still dramatic, is less fussy than before. Its surfaces are cleaner and more confident, and the build quality is much improved, with tight panel gaps and beautiful finishing everywhere you look. There are, as always, some intriguing details as well. The contrasting-colour roof pillars flow seamlessly into the rear decklid, for example. There, they join an artfully-perforated engine cover with a “chimney” to vent heat from the engine. And out back, slim, straight-line LED lights cut through a gorgeous mesh that covers up the mechanicals like a high-tech negligee. 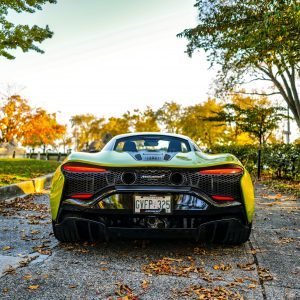 Behind that mesh, Artura features an all-new high-performance plug-in hybrid powertrain, the first in a McLaren outside of the million-plus dollar P1. The low-set twin-turbo 3.0-litre V6 engine is paired with an electric motor, producing a total of 671 horsepower and 531 lb-ft of torque, enough to teleport to 100 km/h in three seconds flat, and all the way to 330 km/h. The electric motor, which produces its maximum torque right away, fills in at lower revs while the turbochargers are waking up, while the turbos keep pushing the Artura forward in each gear right up to the 8,500 rpm redline. At lower revs, the engine can sound a bit gruff, but it sounds like ripping silk as you approach redline, overlaid with turbo whooshes and electric whine. 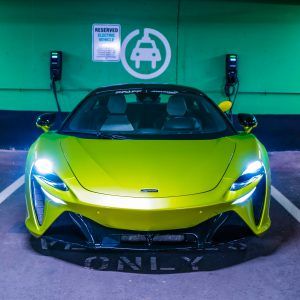 This is a very fast car – too fast, really, to be able to exploit without a racetrack. Which is why the coolest, and most surprising, thing about the Artura is its ability to drive emissions-free in pure electric mode. Indeed, it defaults to electric mode on startup, letting you creep through your underground parking lot or along city streets without waking the neighbours. The axial flux electric motor produces enough torque, 166 lb-ft, to haul the lightweight supercar around with real authority. Throttle response is instantaneous, and even without touching the gasoline engine, the Artura feels seriously strong in town. 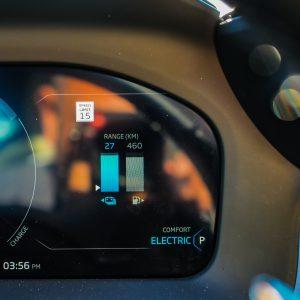 Range in pure EV mode is about 30 km, which isn’t a lot if you’re comparing the Artura to pure EVs – but it’s enough that you could do a lot of commuting with zero emissions, and it turns the McLaren into a guilt-free supercar when you’re sitting in traffic. You can make your way out of an urban centre without bothering anyone, then unleash full power once you’re on the open road, and after returning from a weekend blast, there’s nothing better than calming everything down and cruising back on electric power alone. Because the motor drives through the transmission, there’s enough high-tech noise to keep the driving experience interesting, too. 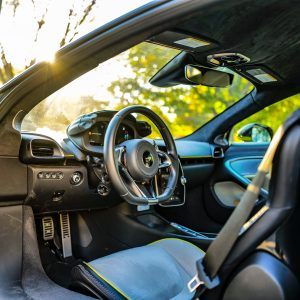 Other parts of the pure McLaren driving experience are in evidence here, regardless of propulsion method. The Artura’s steering is simply the best you’ll experience in any car: a small, thin-rimmed wheel makes it feel like your hands are in direct contact with the ground, such is its feel and precision. The ride quality, which can be adjusted to three different levels of stiffness, is spectacular for a supercar – comfortable and easy to live with, without sacrificing anything in terms of stability or cornering speed. The ceramic-composite brakes are insanely powerful when you’re driving aggressively, but can require some practice to modulate smoothly in traffic. 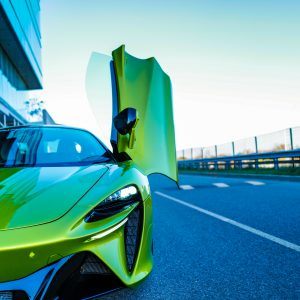 Previous McLaren supercars lagged when it came to driver assistance and infotainment technology, but the Artura is totally up to date. Adaptive cruise control, traffic-sign recognition, and lane-departure warning are standard. A suite of cameras not only enables a high-tech telemetry system that can make little movies of your on-track exploits, but also gives you a 360-degree view around the car when parking. And the infotainment system, featuring a floating virtual touchscreen, is super-responsive and offers Apple CarPlay and Android Auto integration (albeit, not wirelessly). 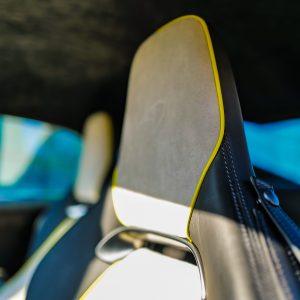 Tech aside, the Artura’s cabin is shockingly comfortable for such an extreme machine. Getting into the low, low seat requires a bit of contortion, but once you’ve cleared the wide sill, there’s plenty of space, and plenty of adjustability for the seat and steering wheel. Visibility out the front is spectacular through the wide windshield and over the low fenders; what’s surprising is that, thanks to the floating rear pillars, it’s easy to see out the back as well. Combine all of this with a front trunk that’s able to swallow a couple of overnight bags, and you have a great car for a weekend away, and even for daily commuting. 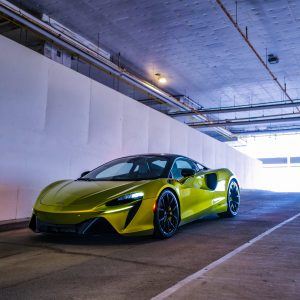 It is that everyday element that makes the Artura such a compelling ownership proposition. There are, if you have the budget, plenty of ways to spend a lot of money to go really fast, look really good, and make a lot of noise. But the McLaren’s practicality, usability, and particularly its ability to drive in zero-emissions mode using the electric motor, don’t just make it feel special; they add an additional dimension to the experience. Not only does the Artura have a broader range of capabilities than a traditional supercar; it delivers in deeper ways as well. It’s a supercar you can drive today that feels like it was beamed in from the future.