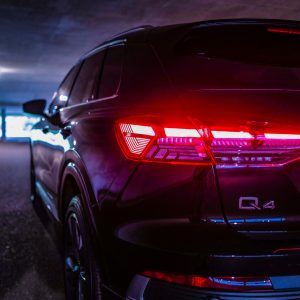 Audi is all-in on electric. The company has announced publicly that it is ending development of gasoline and diesel engines by 2026, and plans to be an all-electric brand by 2032. All-electric Audi models such as the original e-tron and swift e-tron GT sedan, have been rolling out since 2019, but the new Q4 e-tron, now arriving on our shores, is by far the most important. A pure-electric SUV aimed straight at the heart of the market, it has to be a success in order for the brand’s ambitions to come true. 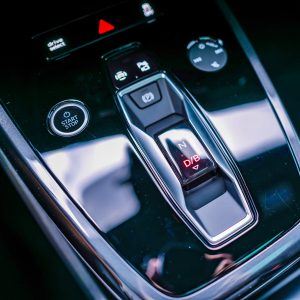 Fortunately, on paper, the Q4 e-tron has a lot going for it. Sized on the outside like a Q3, but with space like a Q5 inside, it’s built on an all-new platform that’s been designed from the ground up for electric power. That means none of the compromises typically associated with turning a gasoline car into an electric one. Does the Q4 succeed in the real world as well as it does on paper? Read on to find out. 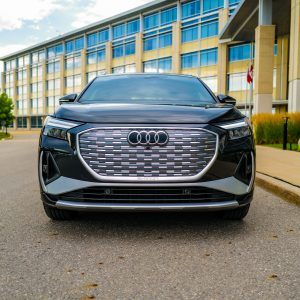 As you would expect from an Audi SUV, all Canadian Q4 e-trons come with standard quattro all-wheel drive. But instead of a mess of transmissions and drive shafts, all four wheels are powered by electric motors, one at the front and one at the rear, which produce a total of 295 hp. If anything, that horsepower figure understates how fast the Q4 feels, as the electric motors produce all of their substantial torque without any lag, and there’s no transmission that has to figure out what gear to be in. Acceleration at any speed is swift, smooth, and instantaneous, especially in the city, where gasoline SUVs can feel a bit cumbersome. 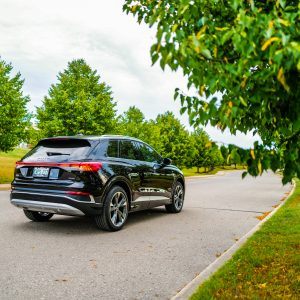 Thanks to its low centre of gravity and all-wheel traction, the Q4 e-tron handles like a dream. Unless you’re driving irresponsibly quickly on public roads, the Q4 will simply grip and go where you point it – surprisingly quickly. Paddles mounted to the back of the steering wheel let you manually adjust the level of regenerative braking when slowing down (it resets to default as soon as you touch the accelerator), but the brake pedal itself feels a little light and disconnected. 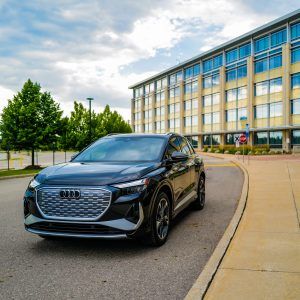 The Q4’s ride quality, as well, isn’t the most luxurious, feeling a little stiff over cracked urban pavement – a consequence of having to support that big battery. On the plus side, thanks to those small electric motors, the Q4’s turning circle is amazingly tight, making maneuvering around parking lots and city streets a breeze. 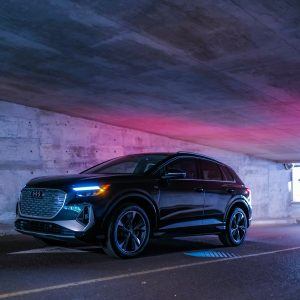 The Q4 e-tron’s active safety technology is beautifully integrated and seamless in operation. The automatic regeneration function, for instance, uses the adaptive cruise control’s sensors to make driving in freeway traffic smoother while adding a little bit of range, while the lane keeping assistant is smooth and progressive. Other safety gear includes automatic pre-collision braking with pedestrian detection, blind spot monitors, and more. 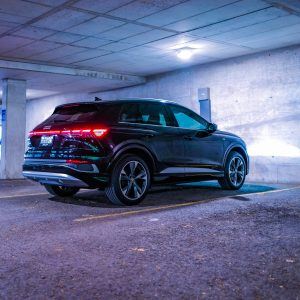 Since it’s been built from the ground-up as an electric vehicle, the Q4’s interior is amazingly spacious given its compact footprint. Subjectively, there’s more room front and rear than the Q4, thanks to the super-long wheelbase, the panoramic glass roof, and the way the forward roof pillars stretch way out front over the dashboard. The rear cargo area is large and usefully-shaped, and below the floor, there is a fairly sizable covered compartment that can hold the vehicle charger and other gear out of sight. 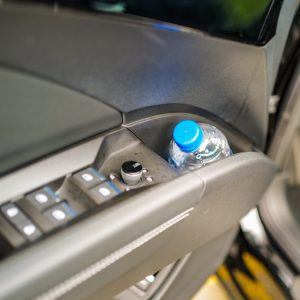 The Q4’s interior is also packed with thoughtful little touches that come as a consequence of its ground-up design. It starts with the bottle holders in the doors, which, unlike in most SUVs, aren’t carved into the map pockets down low, but are actually up at the same height as the window switches, making them very easy to reach. Thanks to the lack of a transmission tunnel, the centre console has a deep storage bin, as well as a floor compartment and a couple of shelves for the wireless phone charger and your sunglasses. Other pluses include actual physical buttons and switches for the climate control, an excellent Sonos audio system, and Audi’s fine digital cockpit, which now has a special e-tron display mode focused on economical driving. 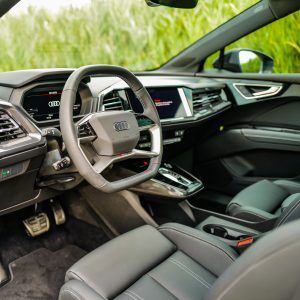 For a vehicle that costs just under $60,000 to start, the Q4’s cabin isn’t perfect. The seats are up to Audi’s usual excellent standards, but the trim materials used on the dash and door panels aren’t, with shiny, scratchy black and grey plastic dominating. Some controls, such as for the drive modes, are tough to reach. And there’s no seat memory function. And what’s up with the strange, hexagon-shaped steering wheel? It may look high-tech, but it feels unnatural on the move, especially during low-speed maneuvers where some hand-over-hand action is required. 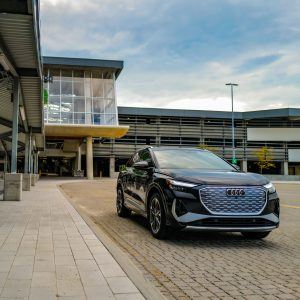 Thanks to its smooth, aerodynamic shape and its electric-first architecture, the Q4 e-tron is impressively efficient. Its standard 82-kWh battery is rated by Transport Canada to deliver 388 km of range, but I actually saw the Q4’s range estimate on a full charge exceed 460 km in temperate summer conditions. Drive sensibly and use the car’s technology properly, and you’ll regularly exceed the government estimates. 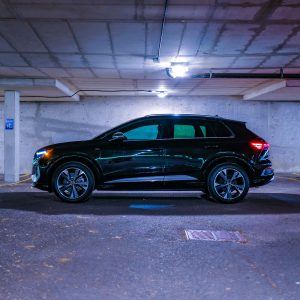 When it comes time to charge, the Q4 e-tron’s 125-kW charging ability isn’t class-leading, nor is its 400-volt electrical architecture. Still, charging from 5 to 80 per cent on a Level 3 charger takes a reasonable 38 minutes, time for a bathroom break and a coffee when stopping on a road trip. Four years of 30-minute Electrify Canada charging sessions come free with every Q4 e-tron, and their network is one of the best, with the latest, fastest chargers and a handy smartphone app. For day-to-day use, a Level 2 home charger installed at home will give you the best experience, letting you begin your routine with a full charge every day. 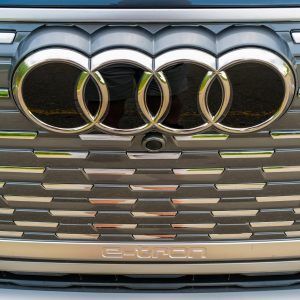 Priced at $59,950 to start, the Q4 isn’t an inexpensive SUV, but it slots nicely between Audi’s Q5 and high-performance SQ5 gasoline SUVs in price. In terms of feature content and technology, the Q4 e-tron is a match for the more conventional Audis, and its electronic systems are arguably even more advanced. Interior space and comfort is superior as well, even if the overall level of finish inside isn’t quite to the same level. 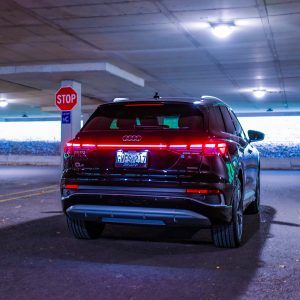 More importantly, the Q4 e-tron delivers real-world performance and acceleration that eclipses both of Audi’s mainstream gasoline SUVs. And once you factor in how much you’ll save by not filling up with premium gas, the Q4’s overall cost of ownership is also a win. Indeed, when viewed as a total package, the Q4 is an excellent overall value, and a package that’s good enough to make you wonder why anyone would need or want the more expensive, more luxurious, but shorter-range e-tron or e-tron sportback.