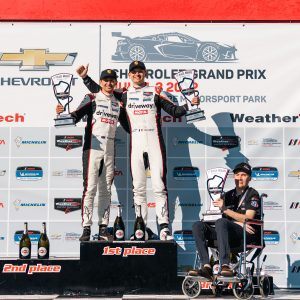 Bowmanville, Ontario, Canada. (July 4, 2022) – The victory was worth the wait on Sunday at Canadian Tire Motorsport Park, with hometown team Pfaff Motorsports taking the checkered flag in the sixth round of the IMSA WeatherTech SportsCar Championship GTD Pro season.

The series had not held a race at CTMP since 2019 due to the coronavirus pandemic, and Pfaff Motorsports – based 45 minutes from the circuit – entered the weekend not only as fan favorites, but as championship leaders in the No. 9 Driveway Porsche 911 GT3 R. 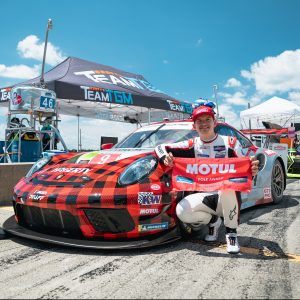 The weekend immediately began well, with Mathieu Jaminet qualifying the plaid-liveried Porsche on pole position. After a strategic two-tire pit stop early in the race, Jaminet turned over the car to Matt Campbell for the closing stint. Campbell held off the hard-charging Corvette C8.R of Antonio Garcia to capture the first victory in the IMSA WeatherTech SportsCar Championship for Pfaff Motorsports at CTMP in front of several hundred Pfaff dealership employees, family members, and customers onsite for the weekend.

The two drivers led a total of 102 of the 111 laps, and further expanded their championship lead to 138 points over the Corvette with four rounds remaining. The win at CTMP is the Pfaff Motorsports’ third this season before the team embarks to Lime Rock Park, the site of its first WeatherTech Championship victory in 2019. 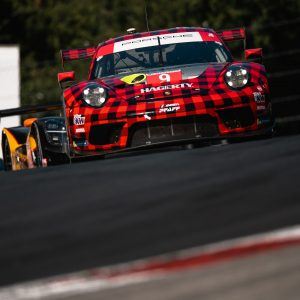 The Northeast Grand Prix at Lime Rock Park is scheduled for 3:10 p.m. ET on July 16. The race will be streamed live, flag-to-flag on Peacock TV, with television coverage later on USA Network beginning at 5 p.m. REV.tv and IMSA.tv will broadcast live for Canadian viewers. Follow along with Pfaff Motorsports throughout the weekend on the team’s Facebook, Instagram and Twitter pages and with the hashtag #LimeRockPark. 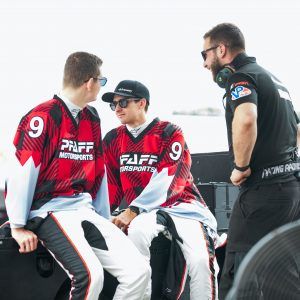 Matt Campbell, Driver:
“I could see (Garcia) was pushing all the time. I could see where he was starting to look in places as well, if he was close on restarts and such. I could see where the car was strong, so I always wanted to make sure I had a little bit of a buffer and gap going into those places and just trying to manage the tires. It wasn’t easy out there to be able to keep him off and think about the end of the race. We got there in the end but for sure, they were always on our heels. It wasn’t easy.” 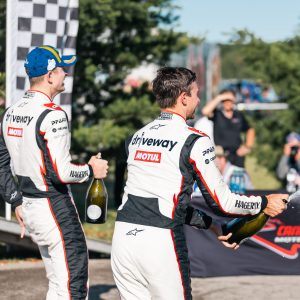 Mathieu Jaminet, Driver:
“It wasn’t easy, not at all. We saw it was a pace and fuel game, especially with the Corvette. When they went yesterday, they were quite quick. Only taking two tires on the left side was something we’d never experienced before, so the car wasn’t so easy to drive and saving a lot of fuel, they saved a lot as well. It was all on the crew and (Matt) to have a quick out-lap to come out in front. Luckily, it worked out. Starting up front and having clear air was one of the keys today because it was really difficult to pass. It was a clean race from my side and Matt drove a super good stint to stay out front. An amazing effort from the team and Matt.” 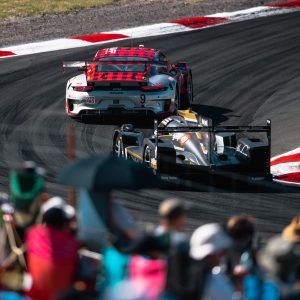 “We had great track position all day and our team was sure we maintained that. The early caution made it a one-stop race and we only took two tires. It put us in a good position to save fuel, and Mathieu did a good job of that. Matt Campbell on his out-lap after our second pit stop was absolutely incredible. He ate the competition alive on his out-lap, and the team in the pits were the quickest in pit lane. All of those things together meant we were able to maintain the lead and our track position. It’s so difficult to pass here – we know the cars behind us were all over us for a reason. But we know where to be good, and we know how to set a car up to make it pretty hard to pass. We were able to do that, no one was able to get by us and we won the race.”