The BMW iX is the most desirable electric luxury SUV 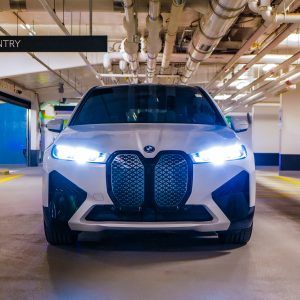 Initial coverage of the all-electric BMW iX was concentrated around its controversial looks. Built on the same styling elements as the somewhat more compact iNext concept car, the iX definitely doesn’t look like any BMW you’ve ever seen on the road. Its one-box shape, giant “grille” elements and skinny lights make it a very different kind of BMW, one not defined so much by sleekness and sportiness, but instead by technology and a deliberate sense of doing things different. 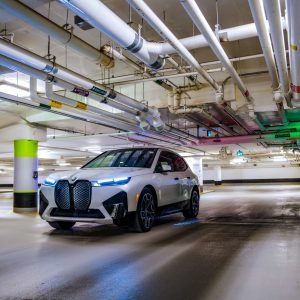 Get past the looks – the iX is highly spec-dependent, and in darker colors and with larger wheels, it actually looks pretty good – and you quickly discover that this is one of the most clever, and most innovative new products from the legacy German premium brands. 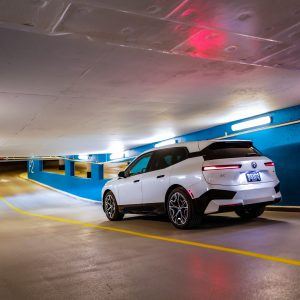 That one-box shape is built from a clever combination of aluminum and carbon-fiber, to be as light as possible so that the iX can pack a massive 111.5-kWh battery, one of the biggest on the market. Even when driving all four wheels through two motors and delivering 516 horsepower, with a 0-100 km/h time of just 4.4 seconds, the iX xDrive50 is rated by Transport Canada at up to 523 km (depending on wheel choice), impressive for such a large SUV. In four days of driving, I actually found the iX’s range estimates conservative – it’s truly the first EV in which I haven’t felt any range anxiety. 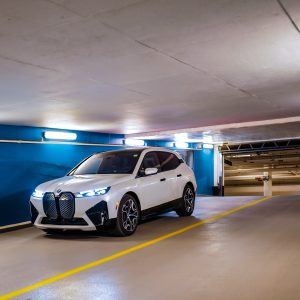 Like most German EVs, the iX’s default drive mode is light on regenerative braking. On the freeway, letting off the accelerator pedal lets the vehicle coast for a surprising distance using no battery power, and without losing any speed – slow for the occasional bit of traffic and you may actually find yourself gaining range, like I did. 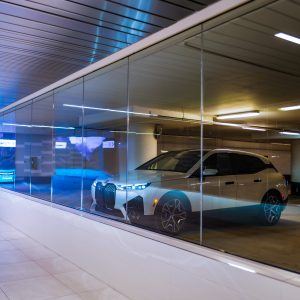 You can set the default regen level higher, but I actually liked the “adaptive” setting the best: the city, the iX uses its sensors to adjust its level of regenerative braking based on the vehicle ahead of you; after a while, it feels perfectly natural, like a skilled driver is assisting you. Should you want more aggressive, Tesla-like one-pedal driving, a “B” mode is available simply by toggling the gear selector. 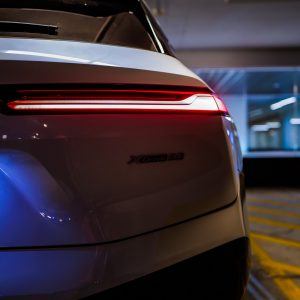 On the road, despite its bulk and its blocky looks, the iX drives like a true BMW – it’s fast, confidence-inspiring, and it handles beautifully thanks to its low center of gravity. The six-sided steering wheel (yeah, it’s not round) points this big brute accurately into corners, and the all-wheel drive offers incredible traction in all conditions. Being an EV, with a single-speed transmission, all of this speed is delivered in a smooth, seamless rush – no screaming engines, no crazy vibrations, no drama. 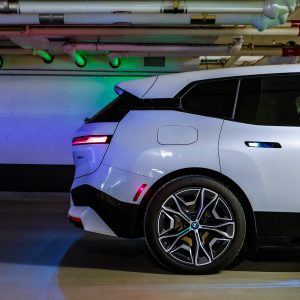 If you’d actually like a little bit of drama to go with all of that speed, you can actually dive into the car’s menus and select BMW’s “iconic sounds,” which have been developed in conjunction with German film-score guru Hans Zimmer. As much as this sounds like a ridiculous gimmick, the futuristic, cinematic noises that accompany acceleration and braking are really kind of cool. 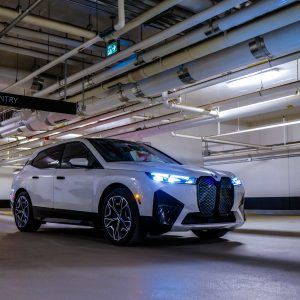 If the exterior design is polarizing, the iX’s interior is universally adored by everyone that I show it to, combining an impressive feeling of space with bold styling, unique materials and exceptional build quality. 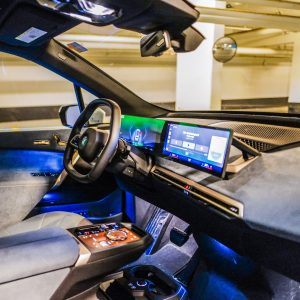 Built on BMW’s “Neue Klasse” platform, which was designed from the ground up for electric vehicles, the iX makes the absolute best use of its footprint. The giant 22-inch wheels are pushed right out to the corners of the vehicle, and with no “engine room” required, the nose is short and stubby, liberating more interior space. The floor is completely flat, with no transmission “hump,” freeing up lots of space for feet. The doors are big and tall, offering easy ingress and egress, and the interior feels way bigger than an X5’s, even though the iX’s overall footprint is similar. The cargo area behind the rear seats is huge, and there are tons of large and useful storage spaces inside the car, including a deep two-level console bin. 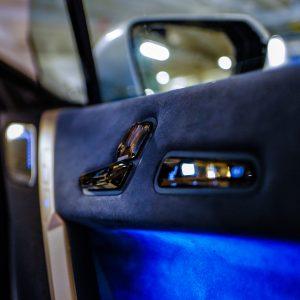 What’s best about the interior is that it doesn’t look at all like a luxury SUV interior – in its design or its materials. The front seats are big, high lounge chairs separated by a console that almost looks like a coffee table in a high-end club – especially with the crystal gear selector and control knob. There’s a cinema-like screen stretching across the dashboard. And the back seat is shaped more like a comfortable couch than a trio of car chairs. While BMW does offer you the choice of conventional luxury-car leather, the fabric interior is actually way more exciting, and way more luxurious – a combination of quilted velour and hard-wearing twill that feels like something you’d find on custom furniture. The fabric interior is made of recycled materials, and is cooler in summer and warmer in winter; go for it. 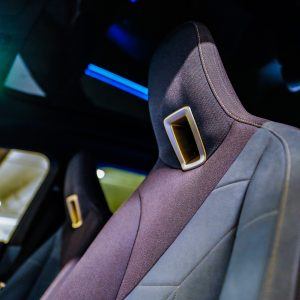 While the iX is packed with technology and packed with screens, it is, for a modern luxury EV, remarkably easy to use, most of which is down to the iDrive controller perched on the console. While you can use touch to swipe and poke through all of the options on the big screen, it’s actually simpler and less distracting to use the physical controller, which lets you operate by feel, with less distraction from the road ahead. The digital instrument cluster, while offering a plethora of information, is easy to read and easy to configure; there’s a usefully large head-up display that also gives you all the information you really need without ever having to look down. 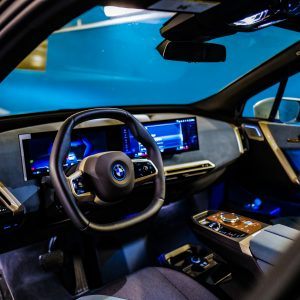 As you would expect from a high-end SUV, the infotainment system is excellent. Wireless Apple CarPlay and Android Auto are standard, and the system blows up the phone controls nice and big. More importantly, thanks to the incredibly silent cabin – a nice side-effect of electric drive – the performance and clarity of the thumping Bowers and Wilkins sound system is among the best I’ve experienced in any vehicle, ever. I found myself re-listening to music tracks, discovering nuances I never noticed were there. The interior also is available with an interior monitor camera, which can keep an eye on the kids in back (or take a selfie). Passengers are well catered to with rear-seat climate control as well as a quartet of easily accessible USB-C charging ports. 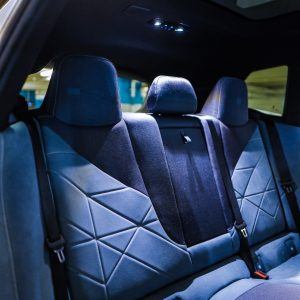 Beyond entertainment, the iX also features a number of useful driver assists, including lane departure warning and assist; a 360-degree set of cameras, pre-collision braking, active cruise control, and more. Save for the lane assist – which is too aggressive, and which I turned off for my time with the car – all of the systems work smoothly and unobtrusively. Stray from your lane and the steering wheel vibrates gently; the active cruise includes a lane-change feature that is operated simply by activating the turn signal. 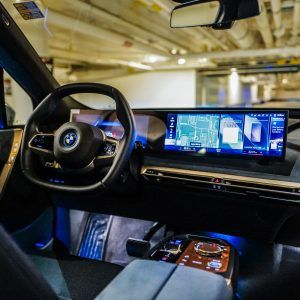 I have to admit, I was not prepared to like the BMW iX nearly as much as I did. The looks, to put it politely, are polarizing, and I still don’t like its giant “grilles,” its blocky profile, and some of its details. Yet, despite that, it’s already shot right near the top of my list of most-desirable EVs, not least because it offers such an excellent, well-rounded driving experience, and has what may be the boldest and coolest interior of any passenger vehicle you can buy today. 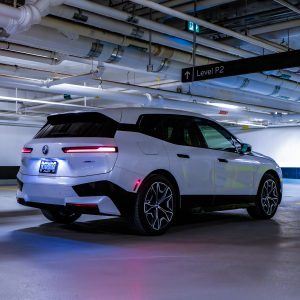 The iX isn’t cheap – out the door, you’ll be at $120,000 for an xDrive50 –  but its pricing stacks up well compared with the Tesla Model X, which is its closest natural competitor. While the BMW isn’t quite as quick, doesn’t have the Tesla’s trick “falcon wing” doors, and doesn’t have the Californian car’s useful front trunk, it does offer a much better interior and a more well-rounded driving experience – for about $25,000 less. 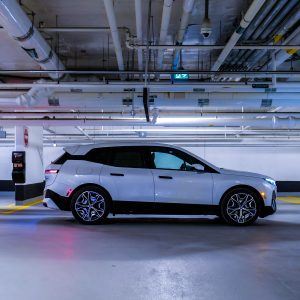 While it may seem funny to be talking about cost savings for such expensive vehicles, even luxury EV buyers care about cost – one of the major reasons for purchasing an EV, after all, is the savings on fuel. The iX’s space and capability are on par not with the BMW X5, but actually the larger X7 – a vehicle which even in six-cylinder form will consume hundreds of dollars worth of gas a month. The iX’s range, performance, and space make it a compelling alternative – and that value comes with a unique future-led design that’s hard to put a price on. 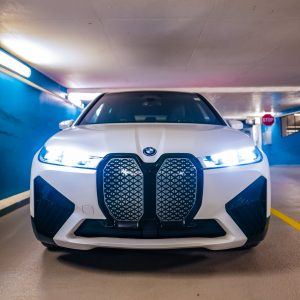