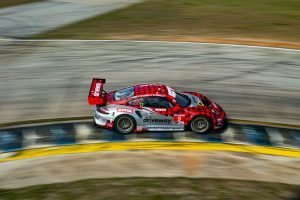 After an impressive win at the 24 Hours of Daytona, Pfaff Motorsports came away with a fifth-place finish at the 12 Hours of Sebring that maximized the potential of the No. 9 Driveway Porsche 911 GT3 R throughout the weekend.

It was evident from the beginning of the week the Porsche lacked pace compared to its GTD Pro competitors and the trio of Matt Campbell, Mathieu Jaminet and Felipe Nasr started from sixth place. 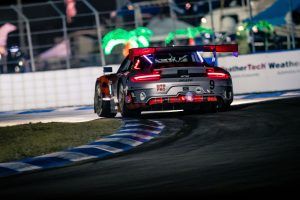 However, the team didn’t put a foot wrong for the full 12 hours on the notoriously bumpy racetrack, performing flawless pit stops and executing different strategies to attempt to fight for a podium after winning the race in GTD last season.

With its top-five finish, Pfaff Motorsports maintains a three-point lead in the driver and team championship standings in the 2022 IMSA WeatherTech SportsCar Championship season. The team is also second in the IMSA Michelin Endurance Cup, which resumes at Watkins Glen International in June. 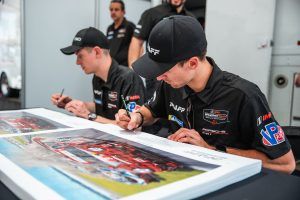 Next on the calendar is the Grand Prix of Long Beach on April 8 – 10. The one hour, 40-minute sprint race opens the WeatherTech Sprint Cup, consisting of the season’s non-endurance rounds, and is scheduled for Saturday, April 9 at 5:05 p.m. ET (2:05 p.m. local time). The race will be televised live on USA Network and streamed on Peacock TV in the USA and on REV TV in Canada. 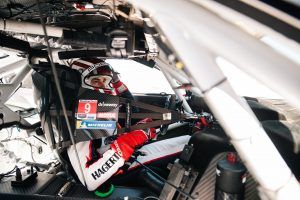 Matt Campbell, Driver:
“For sure, the biggest positive of the race is that we still have the championship lead and that we were able to finish the race. We wanted to be up further, but it’s clear that our competition was just too quick for us, unfortunately. We were able to salvage the best out of a bad situation. It’s not where we wanted to be, but in the end, we were smart in our race to be able to get as many points for our championship.” 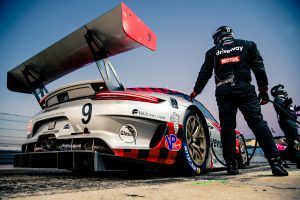 Mathieu Jaminet, Driver:
“We quickly realized we didn’t have the pace to fight for more. We were just lacking pace all day long and it was a tough fight. In the end, we had a clean run, and the team did a great job in the pits. We tried some things on strategy and even sometimes when we were in front, we couldn’t just keep up, and lost positions in the battles because we were too slow. We maximized the package and got some good points with P5. Now, we need to analyze and see what we can improve for Long Beach.” 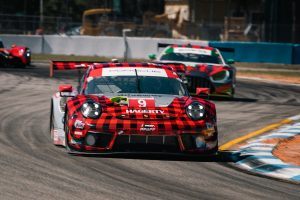 Felipe Nasr, Driver:
“I was happy to be back with the No. 9 Pfaff Motorsports Porsche for this weekend at Sebring. It was a busy weekend, going back and forth from the WEC race and into the IMSA commitments, but was a great experience to have another run in the car here at Sebring and being able to work closely with the team.

“I felt like we did everything we could to keep the car running in the top five all day long. It was a difficult race for us, and it’s frustrating because we all wanted to be up there fighting for another win. Having great execution, great pit stops, great driving from Mathieu and Matt, the calls on strategy, everything else was looking good. But when you look at the result, we weren’t quite there to fight for that victory. There’s a lot to analyze and understand, but we move on and it’s still points for the championship. My job here was to help them the most I could in the endurance races, and when we don’t have the car to win, we have the car to score the maximum points and I feel today is one of those days. We’ll keep working for a better one next time.”