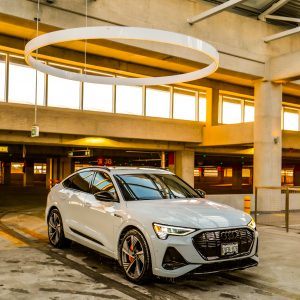 Audi’s e-tron, one of the original premium German electric vehicles, has a new sibling called sportback. Substituting a sleek, teardrop-shaped side profile for the more practical boxy SUV shape, the e-tron sportback sure is a looker, especially in S Line trim, with a blacked-out front “grille,” giant 22-inch wheels, and orange brake calipers. As you walk up to it, LED lights animate themselves into life; it looks expensive, futuristic, and at the moment, quite unlike anything else on the road. 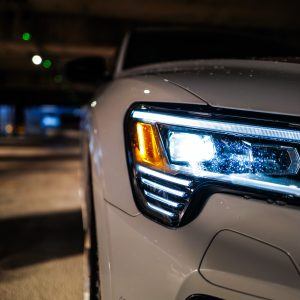 It is as lovely to drive as it is to look at. Even on those giant wheels, the e-tron sportback rides beautifully, thanks in part to standard-fit air suspension that automatically adapts to your driving style (or lets you choose from a half-dozen drive modes manually). Twin electric motors deliver a seamless rush of acceleration that feels much stronger than the 402-hp on-paper rating would suggest; that such speed comes with such silence shows how hard Audi’s engineers have worked on sound insulation and refinement – there are no squeaks or rattles, and the slickly-styled body cuts cleanly through the air with very little wind noise. 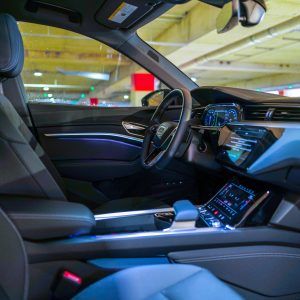 Easily the best part of the e-tron sportback (or any e-tron) is its interior. Audi built its reputation on gorgeous interiors rendered from the best materials, and this electric SUV is no different. The seats are fabulous – supportive in the corners but supremely comfortable on long drives, and with a delightful layer of soft cushioning over a firm base. The dashboard, door panels, console, and all the fixtures feel like they’re hewn from a solid block, such is their solidity. 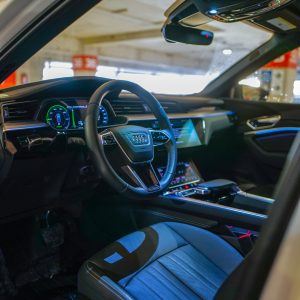 Real aluminum trim and variable LED lighting add a high-tech feel, as does a pair of touch screens for all major controls. While I’m not a fan of touch controls in general – they require you to take your eyes off the road to use them – these two panels are at least quick-responding and have haptic feedback. The infotainment system pairs quickly with your phone and offers wireless Apple CarPlay and Android Auto functionality, with a wireless charging pad integrated vertically into the spacious console. (Occasionally, CarPlay, paired with my iPhone XS, was a bit laggy, but it seemed more like a glitch than something systemic.) 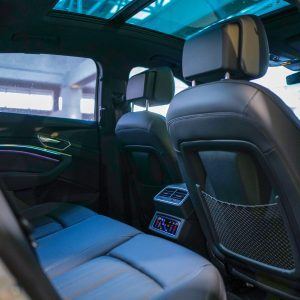 Thanks to its tall architecture, the sportback’s sloping roofline doesn’t really compromise rear-seat space as much as you might think. While there’s a little less headroom on paper compared to the “regular” e-tron, there’s still more than enough, and a long wheelbase means there’s plenty of room to stretch your legs, too. The cargo area is large and flat, accessed through a huge rear hatch, and you’ll only wish you’d got the boxier e-tron if you regularly pack your SUV to the rafters. Otherwise, go for the sportback: it casts a more distinctive profile on the road that’s in keeping with its high-tech nature. 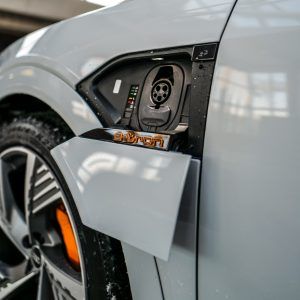 Speaking of technology, driving the e-tron sportback is a reminder of how quickly electric vehicle technology has advanced. While the sportback is a relatively new model, the original e-tron was introduced in 2019 – and while three years doesn’t seem long in regular-car terms, EVs are developing more rapidly. 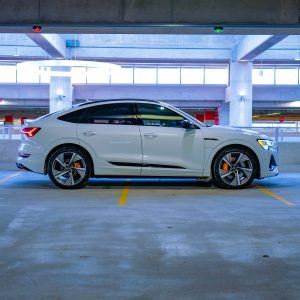 While its interior certainly isn’t as luxurious as the e-tron sportback, Audi’s forthcoming Q4 e-tron does offer a surprisingly similar amount of space, a benefit of being designed as an electric vehicle from the ground up, rather than being adapted from a gasoline vehicle. The e-tron and e-tron sportback are derived from an extended-wheelbase Audi Q5, which is an excellent gasoline SUV, but space is wasted for an engine “room” that is now occupied by a small front trunk and power electronics, and the integration of the 95-kWh battery into the floor forced some packaging compromises. 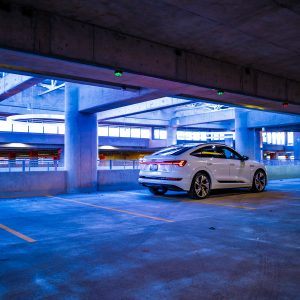 In 2019, the e-tron’s 351 km of range and its 150-kW charging ability were relatively state-of-the art; now they’re equaled if not bettered not only by luxury competitors like Tesla’s Model Y and BMW’s iX, but also by more mainstream models. For instance, that same Q4 e-tron offers superior range (388 km) and efficiency (22.1 kWh/100 km compared to the e-tron sportback’s 27.3 kWh/100 km) from a smaller battery for $20,000 less. 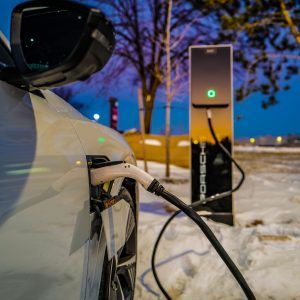 While the range and efficiency stats make a difference on paper, they’re not likely to make a difference in real life. 350 km (or, during my frigid few days with the car in the depths of winter, 260-270 km) is more than enough to cover all the driving you’re likely to do in a day, with overnight top-ups from a level 2 home charger setting you up with a full “tank” every morning. On longer trips, 150-kW charging is good enough to give you a couple hundred km of range in about the same time as you’ll need for a cup of coffee. (There are two level 2 charge ports, one on either side of the car behind a powered door; the left-side port can also take DC fast charging.) 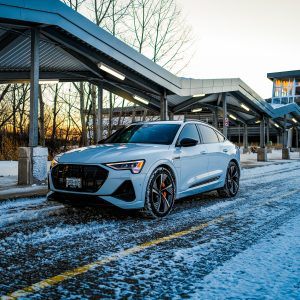 Still, there’s something very likeable about the e-tron sportback, its charm coming from a combination of its distinctive style, spacious interior, and its feeling of luxury. The things that compromise it slightly as an electric vehicle – its steel body, adapted from conventional SUV, its relatively conventional interior, its 2,610-kg weight – also give it a sense of familiarity for those switching from gasoline. Its design, its interior, and the way that it drives make it an appealing package regardless of how it’s powered.