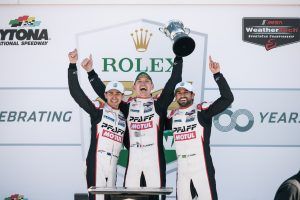 Daytona Beach, FL, February 1, 2022 // In what is already being considered one of the greatest all-time battles in sportscar racing, Pfaff Motorsports captured the inaugural IMSA GTD Pro class victory in the 60th running of the Rolex 24 Hours at Daytona on the final lap. 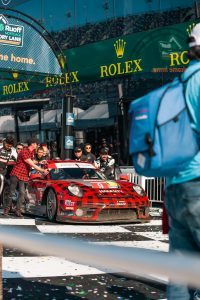 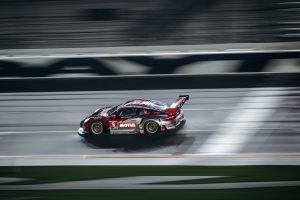 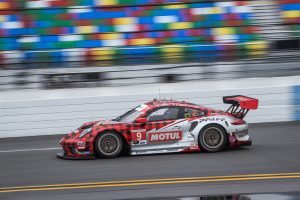 From the wave of the green flag, Pfaff challenged for the lead, taking the top spot on lap nine and staying within the top two positions for the next 120 laps. From there, the team and drivers were methodical in their execution, keeping within the top four positions and performing flawlessly in the pits, while a stream of 17 full-course yellow flags kept the field together throughout the race. 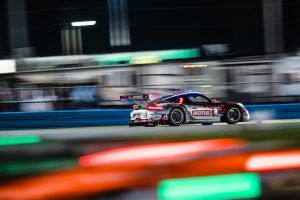 Making a push in the final quarter of the race, Campbell began to chip away at the leading KCMG Porsche, swapping to the top spot before handing the car to Jaminet for the final stint – and a tumultuous two-hour battle with former Pfaff driver and 2021 GTD champion Laurens Vanthoor. 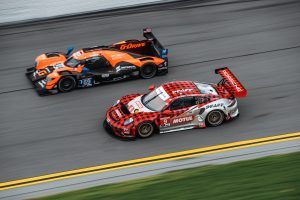 Under green flag conditions, Jaminet and Vanthoor fought head-to-head in the final hour, in what would become one of the Daytona 24’s most exciting finishes. 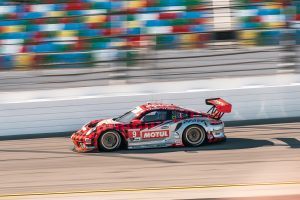 With just four minutes remaining, Vanthoor retook the lead, defending Jaminet with every available resource; the two drivers pushed each other to the track limits and sometimes beyond, battering their 911 GT3 Rs in a fierce dogfight. 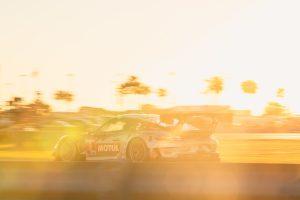 Coming down to the final lap, Jaminet made a calculated dive on the inside of the international horseshoe corner and held steady entering into the NASCAR superspeedway. Making a last-ditch effort with just six corners remaining, Vanthoor pulled alongside Jaminet on the outside of the Le Mans chicane, where the two bumped and went off track. Jaminet held steady as Vanthoor spun, giving the French driver clear air to cross the finish line and capture the team’s first win at the Daytona 24 Hours – in Pfaff’s third full season in IMSA WeatherTech competition. 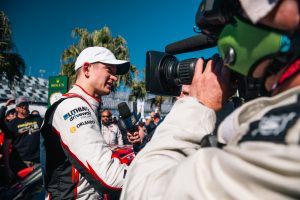 Mathieu Jaminet, Driver:
“At the moment I am speechless. It is difficult to realize what just happened. This is the biggest race I have won in my career. This is the one everyone wants to win; it is the watch (Rolex Daytona) everyone wants to have. To finally get it, it is incredible. I need some time to realize what just happened. Especially in that way: a proper field, proper cars around us. Ihad a crazy finish with one of the best GT drivers in the world fighting against me. The big picture is just perfect.

“Matt did an incredible job throughout the race but especially at the end, because he brought the car back up to the KCMG Porsche which made a huge difference. I am super happy.

“Honestly, I didn’t know it was the last lap. Everyone will remember the last four minutes, but for me, it was two hours of hard fighting. To stay in front for two hours was tough – really tough. When it comes down to the last lap of 24-hours of racing, it is what everyone wants to have, including us drivers, but on the other hand, I feel for the other team because they deserved to win as much as we do. So, hats off to Laurens and to the KCMG crew because they also deserved that win. We worked hard for it. Hats off to everyone at Pfaff Motorsports. They did an amazing job on strategy and in the pits.” 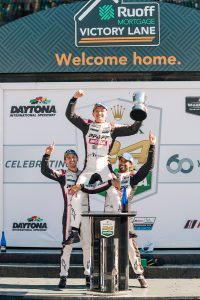 Matt Campbell, Driver:
“I’m super emotional. We are pretty speechless to win a race in such a fashion, especially in the new era with GTD Pro. It is fantastic. To win it the way we did with Mathieu in the car and the finish we had, it just makes it that extra special. And now we can call ourselves Rolex 24 Hour winners. It is an incredible feeling.

“If you look at the cars that were in GTD Pro, it was a race of attrition. We just knew we had to keep it clean until the morning and see if we were in a position to fight, and we were. We had a fantastic strategy and we were able to bring the car back to the front with five hours to go. Then we could start thinking about pacing ourselves for the final hours.

“Mathieu and I have done this race many times. We have come close many times, and now to be able to finally have a win, especially with a full-season effort with Pfaff, it is a great way to start the season. Hopefully, we can get a few more along the way.” 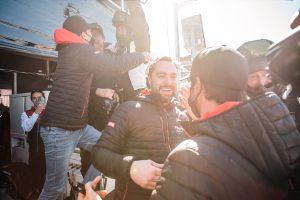 Steve Bortolotti, General Manager:
“That was an intense finish. Obviously, Laurens is a great driver and we know that from working with him last year,and winning the IMSA championship with him. We thought we had a really good car, especially at the end. Mathieu did an amazing job. Frankly, all three drivers did an amazing job. The team was on it all weekend.

“Obviously, this is something we will remember forever. This is why we do it. We put this program together with the goal of success as a group. We win as a team; we lose as a team. We are going to make it a point to continue this legacy and build something great.”

Pfaff Motorsports now returns to its headquarters in Toronto, Canada in preparation for round two and the series’ second-longest event, the 12 Hours of Sebring, happening March 16-19.