Volkswagen’s new GTI is more relevant than ever 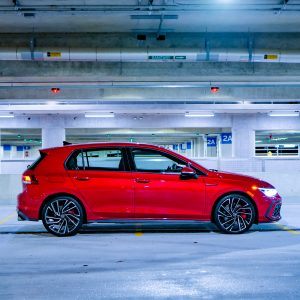 Introduced in 1976, Volkswagen’s Golf GTI is (sigh…) about the same age as I am. A nameplate doesn’t stick around that long without a rock-solid formula, and the GTI’s formula is one of the best. Take an already exceptionally well-rounded hatchback; add some extra power, poise, and driving fun; add some red pinstriping; and you end up with almost the perfect only car. Swift, spacious, practical, and economical to run, the GTI meets almost all the needs of a discerning driving enthusiast without sacrificing any of the functionality you’d expect from the most mundane transportation. 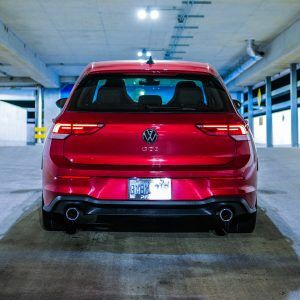 I had a 2019 mk7.5, and it was almost perfect: nice to look at, tons of fun to drive, great on long trips, and exceptionally inexpensive to run. Having come out of a BMW M2, the way the VW sipped regular fuel at 7-8 L/100 km, the lack of wear on its tires and brakes, and its tiny maintenance costs came as wonderful surprises – on top of its sharp steering, composed ride, and its impressive turn of speed. From its Porsche-quality seats to the solidity of its interior, to the intuitiveness of all its controls and the staggeringly gentle depreciation, the mk7.5 set an incredibly high bar. 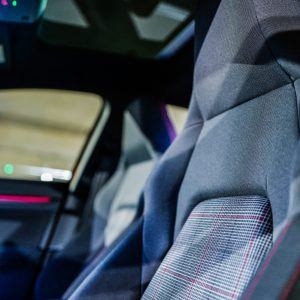 Now, there’s a mk8 GTI, and it’s very much the same, but very much different as well. The basic formula, of course, hasn’t changed. The key dimensions are basically the same, not that they needed much changing: on a tiny urban footprint, there’s adequate room for five, with impressive levels of leg-, head-, and shoulder-room, as well as a surprisingly useful cargo area. A turbocharged 2.0-litre four-cylinder still lives under the hood, producing 241 hp now, up about 15 on the previous generation. The suspension is lowered and tweaked. And there are lashings of red trim here and there, a reminder you’re driving something sporty. Up front, an LED light strip stretches across the entire front of the car, interrupted only by the new, cleaner VW logo; below, a big mesh grille integrates five-point foglights. Out back, there’s a bit more crispness to the character lines, new lights, and even bigger (why?) exhaust pipes. 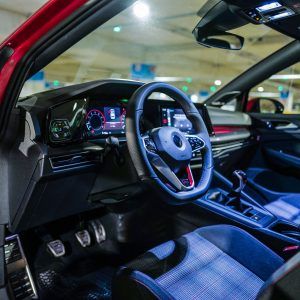 It’s on the inside where it seems like everything has changed, where the analog dashboard, simple rotary controls, and high-quality buttons seem to have all been replaced by slabs of shiny black plastic. The instrument cluster is now fully-digital, configurable a thousand different ways, and a larger touch screen unifies controls for setting up the car, the climate control system, navigation, smartphone integration, and driver assistance systems. None of the “buttons” – on the dash and on the steering wheel – are actual buttons anymore; instead, they’re shiny capacitive sensors hiding behind that black slab. Not only are they fingerprint magnets, but they require you to actually look at them while driving, as they can’t be identified by touch.

To those of us who grew up loving the tactility of Volkswagen’s switchgear, it all feels like a step backwards, all this tapping and swiping and the smeary fingerprints that come with it. There are just so many options to tap and swipe through – multiple “moods” for the ambient lighting, or the ability to customize it yourself; different equalizer settings for different kinds of audio; a custom drive mode that lets you not only choose from comfortable or sporty settings for engine response, exhaust sound, and steering effort, but 14 (!!) different levels of suspension compliance. It took me a couple of hours of poking and prodding to get everything set up the way I wanted.

There are upsides to all this, though. 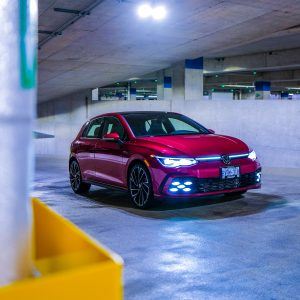 First, once you’ve put in the work, you actually end up with a car that feels pretty special, and tailored for you – my car now unlocks as I walk up to it; podcasts and music alike sound amazing through the Harman/Kardon sound system, thanks to those different EQ settings; my instrument cluster shows a giant map overlaid with road speed and gear indicator instead of a set of round dials; and I’ve got it set up to be swift but comfortable, with the quiet exhaust but the most aggressive throttle calibration. 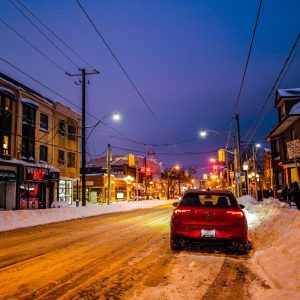 Second, and perhaps more importantly, once you’ve set everything up, you rarely need to dig into any of the complication of those menus and screens (or experience processor speed which, frankly, lags far behind the class best, and even far behind the mk7’s responsiveness). I’ve got everything I need on one shortcut screen, and I rarely touch even that thanks to the way the car seamlessly, and wirelessly, integrates itself with my smartphone. The only thing I really, truly miss are rotary volume and temperature controls – both now operated by swiping non-backlit areas across the base of the screen. 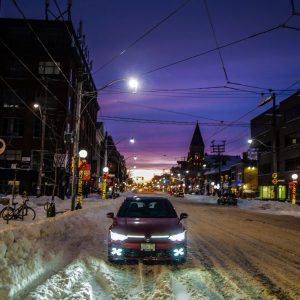 Much inside has actually changed for the better, as well. The seats, always some of the best in the class, are better than ever, and have even better bolstering and integrated head restraints. The console rises up to meet the dash, bringing the shifter within even closer reach; it feels a lot like the high-set console in contemporary Porsches. And while some of the surfaces may feel a little less soft-touch than before, there’s no faulting the exceptional solidity of all the fittings, from the flock-lined door bins to the heft of the console bin lid and the more. New features include four USB-C charging ports, a wireless charging pad for your phone, and available three-zone climate control and heated seats to take better care of rear-seat passengers. 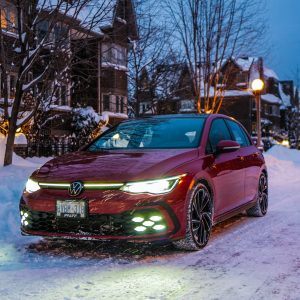 And to drive? It’s better than ever. The three major takeaways are: improved primary ergonomics; an increased level of performance; and a significant bump in refinement.

While I’ve complained about all the haptic touch surfaces that constitute the GTI’s secondary and infotainment controls, the basics: seat, steering wheel, shifter, and pedals, are just superb – and a noticeable step up from the previous generation. While the seating position hasn’t changed, the relative positions of the steering wheel and the high-set shifter on the console give the mk8 a sportier, more intimate feel without sacrificing any space. The steering wheel is a bit thicker, the shifter has a bit more heft, and the pedals are perfect. Together, they feel so well-coordinated in their weighting and response, not only engaging the driver but flattering them as well. 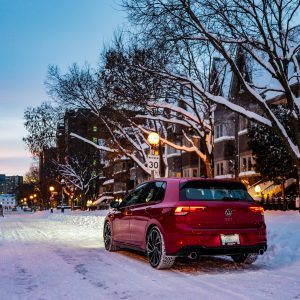 On-paper, the bump in horsepower from the mk7 GTI isn’t significant, but there’s noticeably more punch coming out of tight corners, and more urgency at highway speeds too. The mk8 wants to cruise at higher speeds than the old car did, perhaps a result of that improved refinement. Road and wind noise is significantly reduced – there’s no more boominess at high speeds – and the engine is smoother than before, as well. The standout quality, though, has to be the ride quality, especially with the (ironic, this) Performance trim’s adaptive dampers: even with big, relatively heavy 19-inch wheels, the GTI rides like a luxury car in town and in its less-aggressive settings, without sacrificing any of the agility or high-speed composure you’d expect. 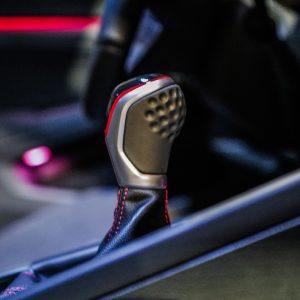 All of this goodness comes at a price. The base MSRP of a GTI has jumped to just under $32,000; there’s a mid-level Autobahn squeaking under $35,000 and the top model, now called Performance, is just under $39,000 – about $3,000 over the old top trim, but with standard adaptive suspension, 19-inch wheels, Harman/Kardon sounds, three-zone climate control and more. Almost Audi money for a Volkswagen – but then the Audi you’d get at this price would need a lot of options to give you a similar equipment level, and probably still wouldn’t be as fun. Really, the list of standard equipment is generous even on the base car – and even the most expensive GTI is still almost $10,000 under the average cost of a new vehicle in Canada these days. 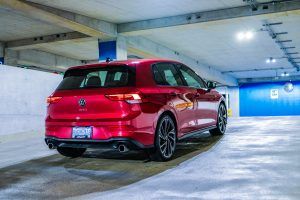 That suggests two things to me. First, given the near-$50,000 price of an “average” vehicle – and the fact that almost 80% of new vehicles are now trucks – that we as a car-buying public may have gone slightly nuts in our love for SUVs, and luxury SUVs in particular. And second, that even with that price bump, the GTI remains a relative bargain. For driving fun, space efficiency, fuel efficiency, and even cost efficiency, this is still a brilliant formula – more relevant today than it’s ever been.