When Porsche first introduced the Taycan, I was prepared, as an old-school fan of the brand, to dislike it. From its electric power to its weight, inset and hooded headlights, and its lack of sound, the Taycan was nothing like any Porsche I’d driven and loved before. But after just a couple of minutes behind the wheel, I was instantly in love.

Despite everything being different, the Taycan also instantly felt like a Porsche. From the feel of the steering to the brilliance of the damping to the seating position, to the searing performance, to the brake feel, it was like every Porsche I’d ever driven from the past – just beamed into the present from the future.

And it was so beautiful to look at – low, wide, with gorgeous curves that gave it an exotic presence on the road. A shape, all of us fans of the brand looked at, that would look fantastic in long-roof format. Which leads us to this Taycan Cross Turismo (let’s call it XT for short), the latest addition to the Porsche lineup, and a vehicle I would argue is the dreamiest dailiy-driver on the market today. 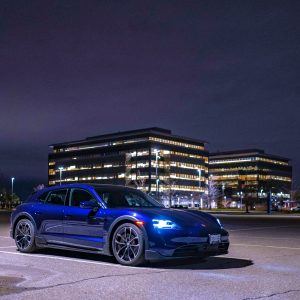 When the Cross Turismo was first announced, via a thinly-veiled concept car, I was worried that its extra body cladding and slightly off-roadish looks might ruin the sensuality of the sedan’s looks. In person, it’s quite the opposite. Particularly when fitted with the right set of wheels (the 20-inchers give you just the right proportion of sidewall to wheel face), the Cross Turismo manages to look sleek and tough at the same time, without sacrificing any of that innate Porsche-ness – sort of like your favourite supermodel dressed up for a hike in the woods.

For a wagon, the Cross Turismo’s proportions are absolutely remarkable. It is insanely wide and long – enough to make tight parking spaces in underground parking lots a bit of a chore – but the payoff is supercar looks and a spacious, airy interior for four whose ambience is significantly lightened by a giant glass roof.

That extra cladding – an even more aggressive look is available with an option package – actually looks great, too, framing the wheels and actually making the body look a little leaner. It also lets the Cross Turismo adapt a variety of different personalities. Depending on which ride height you choose on the air suspension, the XT can look like a butch off-roader, ready to tackle cottage trails, or a low, sleek electric supercar with sill extensions and aerodynamic additions that give it that extra edge. 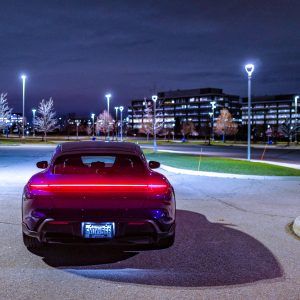 The XT’s biggest change, of course, is in the rear end, which now features a long roof and a large hatch instead of the sedan’s trunk lid. While the absolute amount of storage space isn’t substantially different (if you don’t want to pack the rear right to the roof), practicality and versatility are significantly improved as it’s far easier to load items into the back – and the larger opening gives the XT the ability to swallow packages that wouldn’t make it past the sedan’s skinny trunk opening. (Of course, being a wagon, expanding the trunk area is easily accomplished by flipping down the rear seats, which gives access to over 1,000 litres of space – with a long, wide floor.)

The rest of the cabin is pure Taycan, a combination of the best traditional Porsche attributes with a heavy dose of future tech. The driving position is just perfect – low and comfortable with perfect positioning of the pedals and steering wheel. Visibility is fantastic, at least out the front and sides, the road ahead framed by the curves over the front tires. Build quality is also spectacular – far and away better than any other high end electric car – with premium materials and a reassuring level of solidity that go a long way to justifying the high base price.

How well you get along with the all-touch-screen interface will largely be dependent on how tech-savvy you are in the rest of your life. Other than the transmission selector, the seat controls, steering wheel, and the window and mirror switches on the door, every other function in the Taycan is operated through a pair of touch screens and capacitive switches on the edges of the instrument panels.

It’s all adequately responsive, and the graphics are gorgeous, but I found it frustrating to have to wade through menus to adjust driving systems such as the ride height or suspension stiffness (which, I know, can be programmed into the individual driving mode…also via the touchscreens), never mind select a radio station or audio track. Climate controls, seat heaters and coolers, and the trunk lids are operated through a portrait-format screen on the console; you’ll need a microfibre handy to keep the interior looking clean. 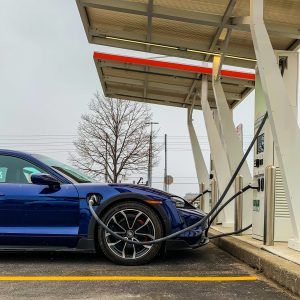 It having been a couple of months since I’d last driven a Taycan, the most pleasant surprise about the experience had nothing to do with the car itself – it was the significant improvement in the charging infrastructure around the greater Toronto area where I was driving it. To wit: two months ago, there wasn’t a bank of public level-two charging stations at the grocery store next to my downtown condo; the number of 350-kw Electrify Canada chargers has increased, and Porsche Centres have been installing “Turbo Charging” facility accessible to Taycan drivers.

Depending on the spec of the Taycan you choose – tip: the smaller wheel sizes with a more disc-like look will provide significantly more distance per charge – range for the Taycan XT can go from about 350 km on a cold winter day to close to 500 km under ideal conditions. With an 800-volt architecture and the ability to suck in electricity at up to 270 kW, a full “tank” on the fastest of level-three DC chargers can be delivered in less than an hour, which puts this Porsche at the top of the current charging-speed charts.

Most owners, however, will purchase a Taycan and install a level-two charger at home in the garage or driveway, and will simply plug it in every night, much like a phone or other electronic accessory. Doing so essentially eliminates range anxiety: you’ll leave home in the morning with a full charge and have more than enough range to complete your day’s activities before the next inexpensive overnight top-up.

Range only really becomes an issue on longer road trips that exceed the maximum range of the battery, where some pre-planning becomes necessary. Fortunately, the car’s built-in navigation system keeps an up-to-date database of charging locations, including their kW ratings, making finding a fast charger on you route easy; you can even add a charging station as a waypoint on a longer drive. For the proverbial Montreal-to-Toronto hike, a distance of over 500 km, you’ll need just one top-up, and there are a fair number of charging choices along the way. 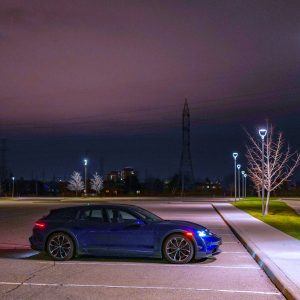 But we’ve ignored the best part about driving the Taycan Cross Turismo up until now, which is the actual driving.

Being an electric car, the car’s acceleration is naturally staggering. The Taycan 4S we’ve driven here is one step up from the “base” model, but it still has 522 hp and can accelerate to 100 km/h in four seconds dead; things only get more insane from there. Unlike many other electric cars, the Taycan also has a transmission, a compact two-speeder in the back that not only delivers impressive acceleration, but upshifts to allow for economical cruising at high speeds. In most daily situations, you’ll just use second gear without noticing; it’s only when driving aggressively that you feel the transmission engage first, and when it does, it provides another level of interactivity to the way the Taycan drives.

More than the speed, though, the Cross Turismo feels like a Porsche – it delivers a sense of incredible confidence from behind the wheel, something that comes from the way it responds so precisely to every input as well as a sense of solidity and toughness from the structure and the way it’s built. Needless to say, it provides more speed, more cornering grip, and more braking performance than you will ever likely use on the road, but knowing that deep well of capability is there makes it relaxing and entertaining to drive at lower speeds.

Moreover, you’d think that with all of its sporty attributes that the XT would be uncomfortable, but thanks to standard-fit air suspension on the 4S as well as that 10mm-higher ride height, quite the opposite is true. It rides very smoothly over any kind of pavement in its “normal” mode, and indeed even in more aggressive “sport” and “sport plus” modes. A “gravel” setting and a “lift” option for the air suspension make light work of tougher terrain as well. 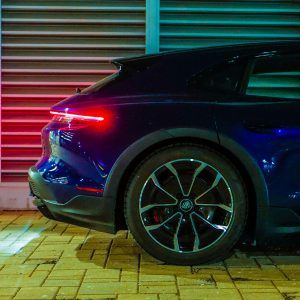 Is there anything the Taycan Cross Turismo doesn’t do? It’s great to look at, fantastic to drive, and its spacious cabin provides additional versatility compared to the luxurious Taycan sedan. Urban dwellers might take a bit of time to acclimatize to its significant length and width (get the four-wheel steering option, which helps), and potential buyers will certainly take a deep breath when it comes to its price and the price of its options. But, for someone seeking the ultimate electric daily driver, there’s not much out there that can touch it.