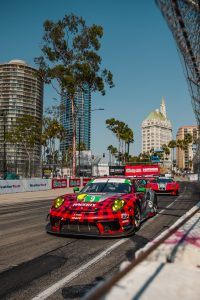 Long Beach, CA, September 29, 2021 // Pfaff Motorsports moved to the top of the IMSA GTD standings after a hard-fought second-place finish this weekend at the Grand Prix of Long Beach. The podium is Pfaff’s third straight after winning back-to-back races at Road America and Laguna Seca, contributing to the team’s title challenge with just two races remaining. 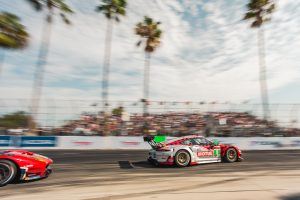 The shortened two-day event – including the shortest race on the calendar at 100 minutes – saw Pfaff drivers Zach Robichon (CAN) and Laurens Vanthoor (BEL) run two practices before qualifying on opening day. Robichon placed the no. 9 Pfaff/Motul Porsche GT3 R in fourth position ahead of Saturday’s race, while his factory co-driver Vanthoor set the top time and a new GTD lap record (1:18.957) during the points portion of the session, scoring a vital 35 in the team’s race to the championship. 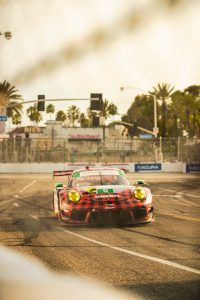 Following the evening’s qualifying, the team decided to make a precautionary gearbox change, with mechanics working on the GT3 R into the early hours of race day. 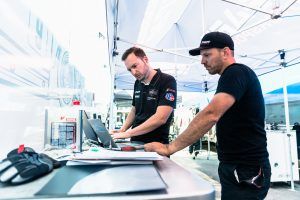 When the green flag dropped on Saturday, Robichon raced the “Plaid Porsche,” wearing sponsorship from Porsche Downtown LA for the weekend, with the lead group, then moved into third after the championship-leading BMW struck the wall and fell down the order on lap 16. 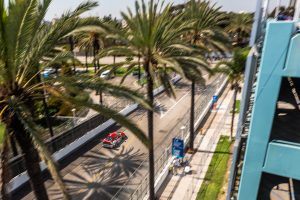 When another competitor had contact with the wall, the team anticipated a yellow flag, and brought Robichon into the pits earlier than originally planned. The Canadian handed the car to Vanthoor with just over an hour remaining. After briefly dropping back to P6 attempting to pass two cars in one corner, Vanthoor mounted an impressive attack to jump three positions in 18 laps before securing second spot with just under 15 minutes remaining. 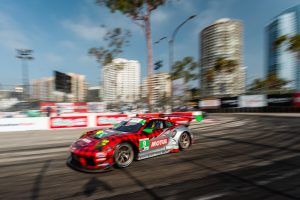 The podium puts Pfaff on top of the GTD standings with a 32-point lead and just two races remaining. The team returns to Virginia International Raceway (VIR) in just two weeks’ time for the GT-only race on October 9, before looking to the series finale at Petit Le Mans, Road Atlanta on November 13. 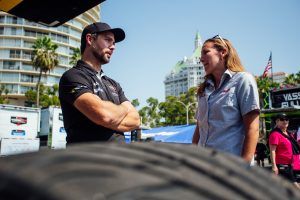 “It was certainly a challenging weekend. The team did a great job of pushing through adversity. We had a gearbox issue all day Saturday. It didn’t affect our performance; it was more of a reliability concern. We worked until the wee hours of the morning to address that. I am really proud of the whole Pfaff Motorsports team for working together to make sure people got rest, but the work got done also. I can say that is a big improvement over years past when we just had everyone here late. Second-place was exactly what we needed, and the championship lead is just a feather in the cap. VIR will be an interesting race for us. It has not always been our best track as a team so we will see how that goes. Same at Petit. It’s time to do well at those two last races and finish this championship off.” 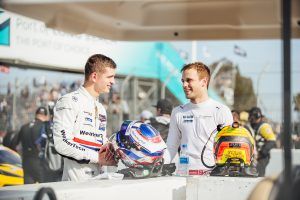 “A good weekend. Maximum points in qualifying and second in the race, so, I can’t complain. At one point we were not in a great position in the race, but we managed our car back up to second place. That gave us the championship lead which I think is important with two races to go. The margin is small to the others so there is still nothing at all won. While we didn’t nail the strategy, we managed to climb back and minimize the damage and, therefore, it was a good weekend.” 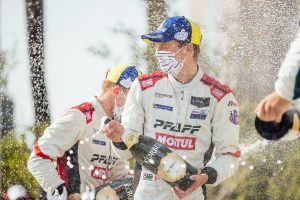 “We need to thank the guys. They were up until 2 a.m. last night changing the gearbox. We came into a track that was new for the team and new for me and we executed all weekend. We were quite confident we could have a strong race, but obviously anything can happen. I’m very happy with our result and what the team did just to make sure we were on track today. At the end of the day this puts us in the lead of the championship for the first time. We are not in the business of losing spots in the championship but there are two races to go. It’s some added pressure on us, but I think we can brush that off and just keep moving forward. It will be about keeping our same mentality for the rest of the year.” 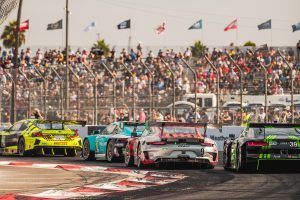