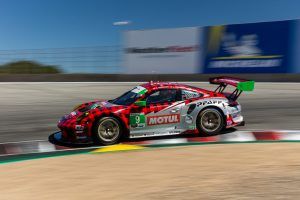 With a concerted effort to shift the tide in their IMSA WeatherTech GTD championship pursuit, Pfaff Motorsports captured their second straight victory – and third of the season – in the no. 9 Pfaff Motul Porsche 911 GT3 R at Laguna Seca this past weekend. The win puts the Canadian squad in second place in the GTD championship, and also in position to jump to first at the next round with just three races remaining. 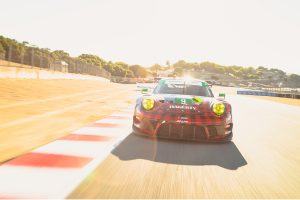 Following a win at Road America, Pfaff kicked off Laguna with strong practice sessions leading into Saturday qualifying. Canadian driver and 2019 IMSA GTD Sprint champion Zach Robichon placed the no. 9 “Plaid Porsche” in sixth for Sunday’s start, before handing the car to co-driver and Porsche factory driver Laurens Vanthoor (BEL) for the points portion of the session. 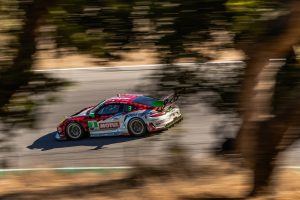 Vanthoor – who captured victory in his last visit to the Monterey circuit in a strategic masterstroke with the factory-supported RSR last season – claimed the fastest time in points qualifying for the second event in a row. 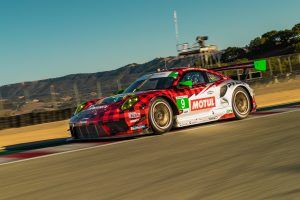 When the green flag dropped on Sunday’s two-hour and 40 minute sprint, Robichon wasted no time and jumped to fourth by just the second lap, keeping the lead pack within striking distance and maximizing his pace before handing the car to Vanthoor on lap 34 of 107. 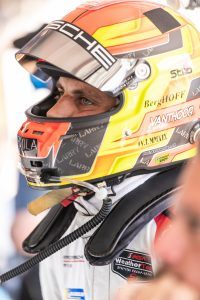 From there, the Belgian began a run on the class leaders, moving up to third on his third lap, then up to second on lap 54. Chasing the lead BMW, Vanthoor drove the Pfaff Motul GT3 R to its limit before pitting for a final fuel stop on lap 61. On lap 63, he overtook for the lead, and continuously built his momentum, putting in a personal-best time on lap 70. Vanthoor held steady for the remainder of the race, crossing the finish line with a five-second lead. 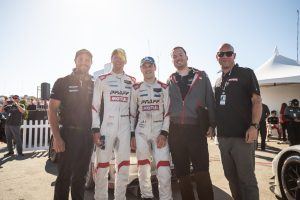 It was a perfect display of execution by the entire Pfaff Motorsports team, and the result makes them the only GTD team with three victories in 2021. With the win, Porsche now leads the manufacturer championship in GTD. 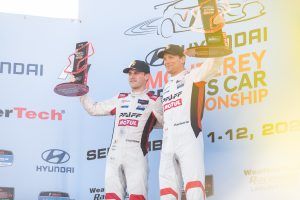 “I’m thrilled with the team’s performance this weekend. Everyone did a phenomenal job, right from unloading to the finishing flag. Everyone worked to give Zach [Robichon] and Laurens [Vanthoor] the best possible car they could, and our drivers proved why they’re two of the best in the field. It was the perfect way to close the gap on the championship, and just what we needed over these last couple of weekends. We’ve had some great performances from an execution standpoint over the last number of weeks – the team has been firing on all cylinders so it’s great to share the success of the last couple of races.” 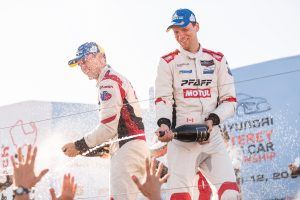 “The team needs to take a lot of credit for this one. We recognized a problem and we fixed it. We knew we could turn our fortunes around, and at Lime Rock everything came back into place. This is what happens with a great team – we are the sum of our parts, and a huge thanks goes out to everyone.” 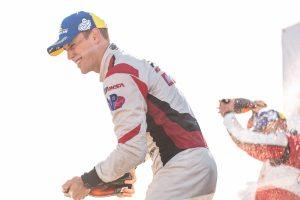 “It was a great performance this weekend. Super happy. Two in a row is perfect, we’re on a roll. The GT3 R was very good on the long run, which allowed us good tire management. I’ve been feeling very comfortable in the car the last few races, so it’s been a lot of fun. We’ve dialed in a good setup, and now we’re looking at the championship.”