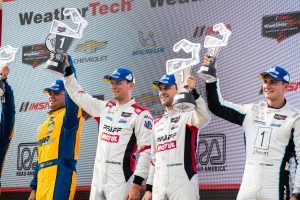 ELKHART LAKE, WI, August 8, 2021 // Road America has quickly become a favourite circuit for Pfaff Motorsports, as the team repeated its 2019 success to capture its second IMSA Weathertech SportsCar Championship GTD win in 2021, and second in as many visits to the Wisconsin-based circuit.

The weekend began with delays due to heavy rain on Friday evening before the first practice, where Porsche factory driver Laurens Vanthoor (BEL) drove the no. 9 Motul Pfaff Porsche GT3 R to the fastest time amongst all GT cars in just three laps around the 6.515-km (4.048 mi) course. Entering practice 2 on Saturday morning, the car was able to complete just five laps before an electrical issue caused the team to miss the remainder of the session prior to qualifying. 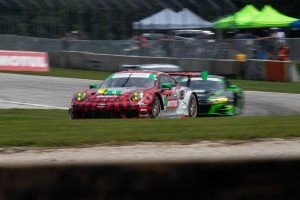 With variable weather continuing into qualifying, co-driver Zach Robichon (CAN) put Pfaff in fourth for the start of Sunday’s race, while Vanthoor was able to capture first in the points portion of the session, setting the scene for what would be an exciting two-hour and 40-minute sprint on Sunday afternoon.

Race day offered the first opportunity for clear skies and dry running, and with Robichon behind the wheel, a stalled prototype saw the team make an opportune strategy call on lap nine, bringing Robichon into the pits ahead of the competition just before a five-lap caution. Returning to the track in ninth, Robichon quickly climbed through the field, coming into the lead by just lap 17 of 69. 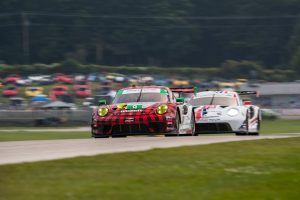 Carrying a strategic advantage, Robichon built his lead and stayed in the car for nearly two-thirds of the race before handing the GT3 R to Vanthoor on lap 42. The Belgian continued to push the pace of the plaid-liveried Porsche, setting a personal-best time of 2:08.950 just three laps into his stint and building a healthy gap to second place to allow for fuel and tire management in the latter stage of the race.

Vanthoor crossed the finish 12 seconds ahead of the second-place BMW, giving Pfaff its second win of the season. With the victory, both the team and drivers sit third in the GTD championship, with 1,830 team points and four rounds remaining – just 100 points back from first.

Pfaff Motorsports returns to action on September 10 at the Monterey Sports Car Championship at Laguna Seca, where the team finished just off the podium in fourth position in 2019. 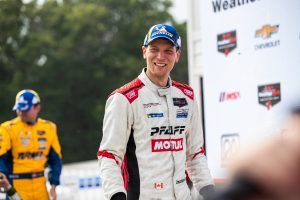 “We were confident. We knew we had a good race car. We had never done more than five laps so we didn’t know what the car would do over a stint, but it is a testament to the preparation of the team. We had a race car that was competitive, and the first pit stop was a fantastic strategy call. The guys saw it and called it and we were able to get in before the yellow. There have been a lot of positives this season that we were not able to show. This weekend we were able to execute on the level we are capable of.” 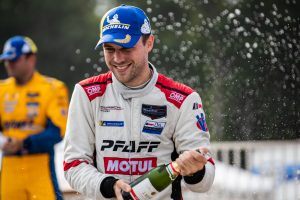 “The car was good from the beginning. Zach made my life easy. I had to bring it home with fuel savings and the tires. We have been strong all season – we’ve had our mistakes, but now we are back on the level we need. We can carry this on and fight for a championship. That was our goal and still is.” 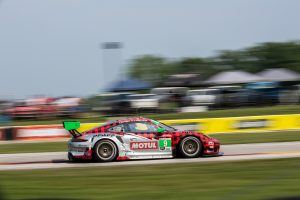 “Our team did a great job throughout practice to find good pace early, and diagnosed our electrical issue very quickly. We were fortunate to have it happen when it did. Because Larry (Laurens) didn’t have any dry running all weekend, we were able to use morning warmup today for him, which is funny because his race stint ended up being quite short.

“For our first stop, we saw the stalled prototype on the TVs and weren’t sure if it was going to get moving, but the time came when we had to make the call, and the Pfaff Motorsports team did a great job discussing the pros and cons, and clearly we made the right call. So kudos to Bruno (strategist). 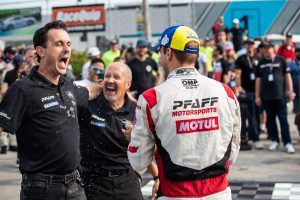 “From there, Zach did a great job passing cars and saving fuel, and he handed a great car over to Laurens who did the same thing to conserve tires and fuel and get us through to the finish. It was a great effort throughout the week by everyone at Pfaff to bring the Pfaff Motul Porsche GT3 R to the top step of the podium today.”