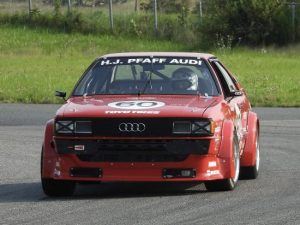 Round 3 for Perry Mason and the H.J.Pfaff Audi historic race team took them to Shannonville Motorsport Park just outside Belleville Ontario for the 42nd anniversary of VARAC (Vintage Auto Racing Association of Canada). This event was. a celebration of the first event in Canada’s vintage auto racing club, and was a special one day “double points” event. 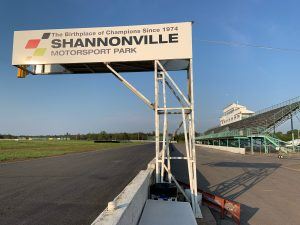 Mason qualified 6th in class while getting used to the heat of the day and the slippery track surface. Race one was 20 minutes long, and ended up with an improvement in position to 4th. A failing alternator had Mason, with the help of fellow racer Mark Brown, replacing it quickly to be ready for the upcoming final. 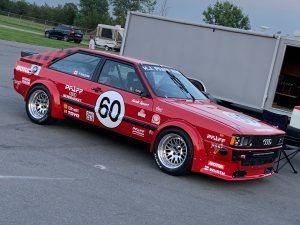 With the drop of the green for the feature race, Mason launched to second but as the race went on, slightly overcome by the heat, he was overtaken by two others and just missed out on a podium finish. 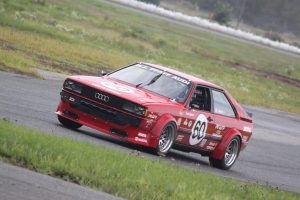 “We’ll take it,” Mason stated afterward. “It was a tough run and I didn’t feel 100%, so rather than be aggressive and possibly make a mistake I decided to drop the pace since we were far enough ahead of the others.” In the end, Mason and the H.J.Pfaff #60 Audi have a good points lead heading back to CTMP September 18th.