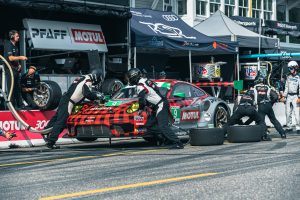 TORONTO, ON, July 20, 2021 // Hopes for a race-day repeat of Pfaff Motorsport’s 2019 GTD win at Lime Rock Park were cut short as lightning delays halted and ultimately cancelled the last hour and 10 minutes of the 2021 Northeast Grand Prix at Lakeville, CT.

The series returned to the 2.4-km (1.5 mile) bull ring for the first time since 2019, and with it, a reinvigorated Pfaff squad was looking to repeat its success from its rookie campaign, and make a move in the GTD championship following its win at the Sebring 12 Hours earlier this year. 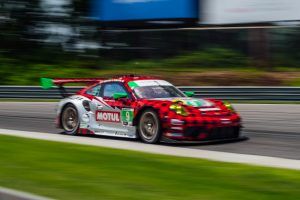 Full season drivers Zach Robichon (CAN) and Laurens Vanthoor (BEL) returned with the Motul Pfaff Porsche GT3 R and kicked off the shortened two-day weekend by taking the top time in final practice before jumping into the series’ position and points qualifying sessions later that day. 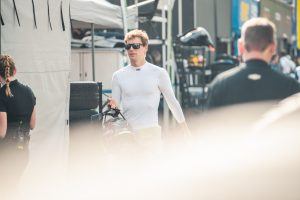 Robichon secured sixth position for the race start, while Vanthoor notched up fourth for points ahead of Saturday’s main event, with positive impressions of the car from both drivers in their return to the Connecticut circuit. 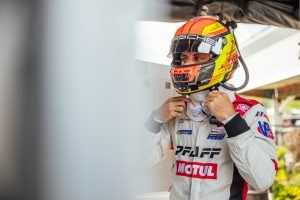 With rain looming ahead of Saturday’s race, both drivers reveled at the opportunity to repeat their past wet-weather successes. Under sweltering conditions at the wave of the green flag, Robichon wasted no time in moving the no. 9 plaid Porsche into fourth position on lap 18, running as high as first before handing the car to Vanthoor. 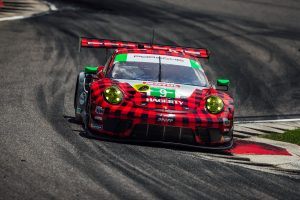 Joining the field in fourth after the stop, the Porsche works driver continued the team’s push with a personal-best time on his third lap, aided by the team’s strategy and a distinct fuel advantage that would bring a podium position into play in the closing stages of the race. 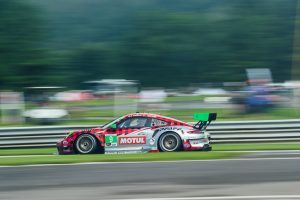 Unfortunately for the team, those plans were dashed when lightning in the area forced a red flag at the 1:29 mark of the 2:40 sprint, and repeated strikes ultimately ended any hopes at a podium as the clock ran down. 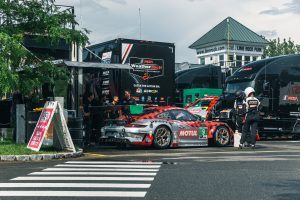 Importantly, with its fourth-place finish, Pfaff closes the gap on its competition in the overall GTD championship, while also buffering its position. The team stands fourth in the championship with four rounds remaining. 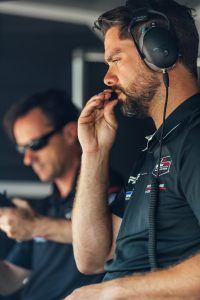 “Everything was going according to plan with our strategy and our race pace was really good. It was looking like a podium was very possible and we were waiting for our strategy to play out. 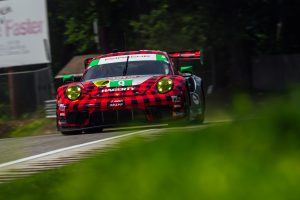 When the yellow came out for weather, at first, we were happy because that was really going to benefit us and cycle us back in the field in P1, but then obviously the severe weather came. It’s too bad, but we have to do what’s safe for everybody. Sometimes you’re on the better side of it, but this time the bounce didn’t go our way.

On the positive side, we definitely found our form again. We were a little off at the Glen, and we addressed some things to get back on it. Certainly, the pace was there from the minute we unloaded and we were confident going into the race. Had it been the full two hours and 40 minutes we would’ve likely had something good to show for it.

Fortunately, Road America is another strong track for our team, so we’ll focus on that and having a great race car there.” 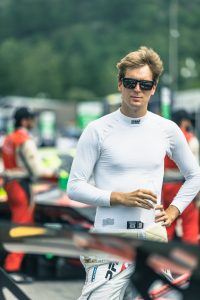 “We didn’t get the car exactly where we wanted to qualifying, but the team did a great job to work together ahead of today’s race. We were sliding up positions nicely today. Had the race gone the whole distance I think we were in a really good position for the podium, and that was our goal all along. As far as a long run car, I think we might’ve had the best out there, and that just goes to show the work the team put in.

I think this is the third race in a row, where a caution or red flag basically decides the winner, but with that being said, we did everything right to that point. So as far as our race went, it really was a great team effort.” 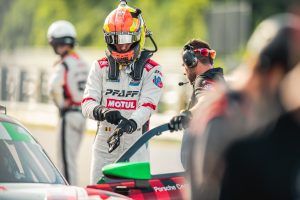 “Our car was really good in the long run and tire degradation was great. I was actually looking forward to the second part of the race because we were in a good position strategy-wise to have a great last pit stop. I was quite positive about the end of the race, but unfortunately the red flag ruined that.

The next stop is Road America – one of my favourite tracks – so I’m looking forward to getting back at it there.” 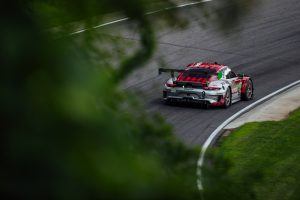 The team returns to action in just over two weeks at Road America from August 6 to 8, where it also claimed victory in its last visit in 2019. For additional event info and full broadcast details, please visit www.IMSA.com.