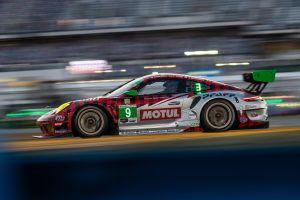 TORONTO, ON, February 3, 2021 // A race weekend that began with plenty of promise for Pfaff Motorsports turned into a race of attrition during the grueling Rolex 24 at Daytona. After starting the race in second position, the team pushed hard past numerous challenges to complete the season-opening endurance race with a resilient effort and a 12th-place finish. 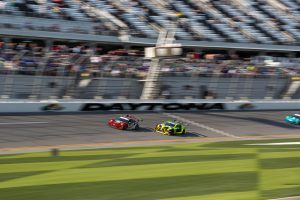 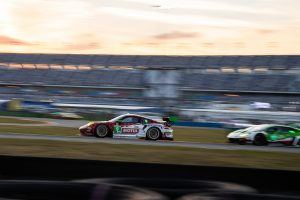 After taking over the car two hours and 35 minutes into the race, Lars Kern (GER), the Nürburgring production car lap record holder, suffered contact to the rear bumper, exhaust and diffuser, pushing the car down the order, though the German was able to continue a consistent pace before a driver change with Australian Matt Campbell on lap 131. 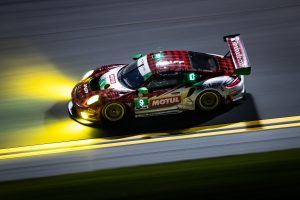 Pfaff’s early race misfortunes continued when Campbell was contacted by a prototype, damaging the front-right aerodynamics. The problem would be exacerbated just past 3:00 a.m., when the team was running in fifth position. Contact with another prototype in the pits damaged the front-right suspension, causing an alignment issue, and forcing a stop just four laps later. 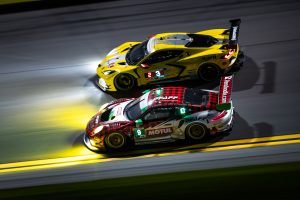 After a quick tie-rod adjustment, the team shifted its focus to maximizing a points finish with a car that was close to race pace, despite a severely damaged front splitter and bumper. 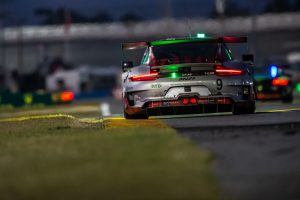 Running within the top six and whittling away at the competition with just over four hours remaining, the team’s woes returned as the GT3 R suffered significant damage to the right-side bodywork and mechanicals after contacting the wall on a pit-out lap. Pfaff Motorsports’ technicians pulled the car into the garage and were able to repair the damage in just 20 minutes – but despite the team’s best efforts, the car returned on-track in 14th position. 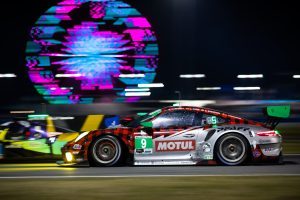 Robichon and Vanthoor shared the team’s final stints, and were able to jump two places to cross the finish in 12th place – far from Pfaff’s initial goals, but a positive result given the adversity faced throughout the race. 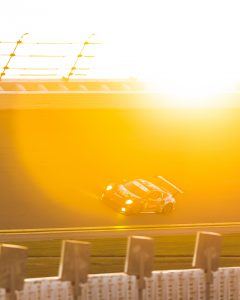 “It felt like we were fighting from behind most of the race. It wasn’t the result we wanted, nor the result I felt we deserved, but that’s how it goes sometimes. Despite everything, I’m really proud of the team and everything they did and how everyone came together on such short notice. We have a lot to be proud of as a group. Sebring isn’t far away and we have a lot to build on and look forward to there.” 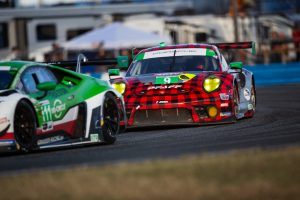 “It was certainly not the 24 we had hoped for going into the race. We had quite high hopes and it looked very promising in the lead-up. We were all very happy with the car, but it just didn’t go according to plan. We had quite a few incidents and the car wasn’t perfect, but we were able to make it work with the lead group, running fifth or sixth. It was very unfortunate to have that incident there with four hours to go, but a major credit to the team who were able to fix the car multiple times to get us back out there to finish.” 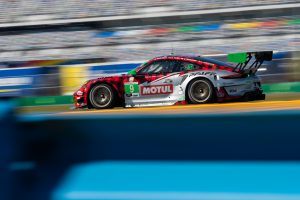 “For the moment, we did everything we could. We knew from the beginning that we could only be our biggest enemy. From the early part, the car was already wrecked all over, so we were always fighting to get back what we had – then the final hours were just the cherry on top. We had a lot of trouble from the outside as well, but finishing 12th is not what we came here for, so we’ll chalk this one up and just focus on preparing for Sebring.” 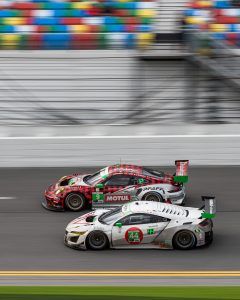 “It was action-packed at the beginning, and everything that seemed like it could happen, happened. But we were resilient – we had damage on the car and we still came through. Towards the end, it looked like we finally had the car where we wanted, but I made a mistake and that was definitely tough. It hurts to have those things happen, but what’s done is done, and the crew really showed what we’re capable of. It was important to get back out there and score some championship points, so now we look onward and forward to the next one.” 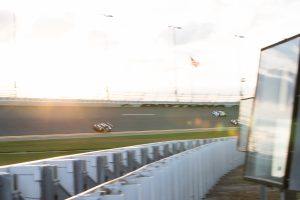 “We had great preparation for the race and were very confident in the first couple of stints. We were really strong and the car was really good, but then had a lot of incidents that kind of ruined the plan. So we missed our chance for a good result – we might not have had the speed to win, but a podium was definitely possible, so we’ll analyze all of the data and build on that for Sebring.” 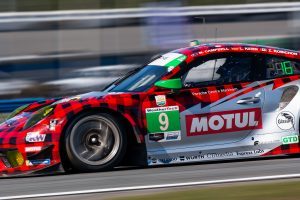 Pfaff Motorsports returns to the track for round two of the 2021 IMSA WeatherTech Championship and the 12 Hours of Sebring, happening March 17 to 20. Broadcast details will be announced closer to the event. For more info, visit www.IMSA.com.