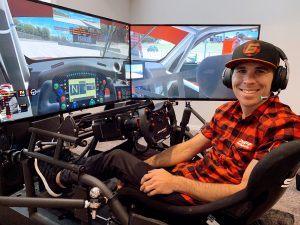 Racing driver Robert Wickens (CAN) will take the wheel of a virtual No. 9 Motul Pfaff Plaid Porsche RSR in the final three rounds of the IMSA iRacing Pro series, rekindling a connection with Pfaff from his early days of racing.

Wickens has garnered a world-class reputation competing at the highest levels of motorsport, including winning the 2011 Formula Renault 3.5 driver’s championship before a five-year stint in Germany’s top-level DTM series, which also included a highly significant role as reserve driver for Marussia F1 before making the move to North America and his IndyCar Rookie of the Year, and Indy 500 Rookie of the Year campaign in 2018.

Also well known for representing Buffalo plaid on his teamwear and merchandise, Wickens says joining Pfaff Motorsports for the IMSA iRacing Pro Series is a full-circle experience, dating back to his early days of racing.

“I’ve known of Pfaff Motorsports since I was 11 years old,” Wickens says. “Racing in the Ron Fellows Karting Championship, Pfaff was influential in that series. The ability to have prize money for pole position, and the driver of the day awards was such a cool thing for all Canadian drivers. It allowed so many young Canadians to gather and compete in the same series, and I gained a lot of great experience from it. It’s really cool nearly 20 years later to come full circle and work with Chris Pfaff and the entire team.” 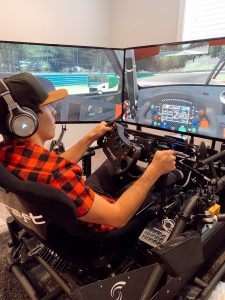 Wickens’ simulator and iRacing experience has been a major facet of his motorsports career and development. Following a 2018 crash that has so far kept him out of a real car, the Canadian has focused on virtual platforms to continue his training and rehabilitation in anticipation of his return, bridging the gap between the real and virtual worlds in the process.

Using a SimCraft APEX1 simulator at home, Wickens has been working closely with the manufacturer to test and develop innovative hand controls that can be further developed by the Arrows McLaren SP IndyCar team, Arrows Electronics, and McLaren for real-world racing and driving applications.

“It’s a global team effort,” Wickens says. “On the IndyCar side of things, between Arrows Electronics and McLaren, we have some phenomenal resources. Especially for Arrows Electronics, they’re always thinking five years out and how they can better the world, so this is a great opportunity.” 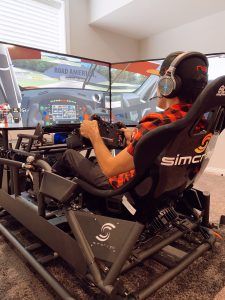 For Pfaff Motorsports’ team manager Steve Bortolotti, that determination was a major motivator to sign the driver for the remaining three rounds of the IMSA iRacing series.

“We’re very excited for Robert to represent Pfaff Motorsports and our partners for the remaining IMSA iRacing Pro Series events,” he says. “We’ve admired his accomplishments both on and off the track for many years, so when the opportunity presented itself to work together in the iRacing series, it was a no-brainer.”

Bortolotti says Pfaff will provide engineering and strategy support to assist with chassis setup, as well as live race strategy during for all three events.

Wickens spent the weekend acquainting himself with the virtual Motul Pfaff Plaid Porsche RSR (the team races a Porsche GT3 R in real life), and while he says he doesn’t have too many expectations going into his first race this week, he’s proud to be competing with the Pfaff organization and wearing plaid while doing so.

“The great thing with Pfaff is that they’re racers down to their bones. I think that’s obvious,” he says. “They’re just a great group of people to deal with. I’ve had the plaid for a while now. I like it, the fans like it, and it’s been a great trademark and a way to bring people together. It’s very cool to be racing together for these events, so I’m very much looking forward to getting underway.”

Round four of the IMSA iRacing Pro Series gets underway from virtual Road America this Thursday, May 14, at 6:00 PM ET. Viewers can stream the main broadcast and Robert Wickens’ feed live on the official IMSA YouTube channel and www.twitch.tv/robertwickens, respectively. For more info, visit www.IMSA.com.

About Motul: Motul is a world-class French company specialized in the formulation, production and distribution of high-tech engine lubricants (two-wheelers, cars and other vehicles) as well as lubricants for industry via its Motultech activity. Present in more than 120 countries, Motul USA was established in 1989 as a subsidiary of Motul France and is based in Southern California. Motul is recognized as the specialist in synthetic lubricants. As early as 1971, Motul was the first lubricant manufacturer to

pioneer the formulation of a 100% synthetic lubricant for automotive engines, the 300V lubricant, making use of Esters technology from the aeronautical industry.