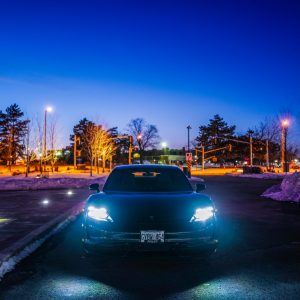 There is a lot about the Taycan, Porsche’s first all-electric model, that will make a traditional Porsche fan nervous. The thought of a Porsche that doesn’t make flat-six music or have gears to shift; the elongated proportions; the way it “wakes” up as you walk up to it; the way you don’t even need to turn it on; the acres and acres of OLED screens inside. You settle with trepidation into the perfectly-formed vegan-upholstered driver’s seat, pull away with a turn of the wheel and a touch of the “gas” pedal, and then breathe a sigh of relief: the future’s going to be just fine. 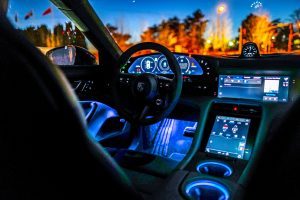 In so many ways, the Taycan is uncharted territory for Porsche – technically, technologically, and perhaps most important, philosophically. There is a lot that is new, a lot that leaves you asking questions about what the future of driving will be like, and a lot that is unfamiliar. But, at its core, the Taycan is still a Porsche; it’s something you feel immediately, and something that fortunately never goes away. It’s a combination of the solidity of the build, the perfect damping of the suspension, the directness and weight of the steering, and the way that, despite all those screens and all that tech, the whole thing still feels somehow analog, organic, and responsive in a way no other electric car has yet achieved. 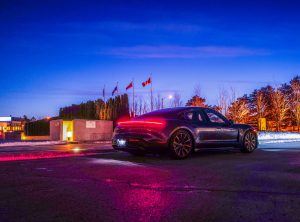 Being hella-fast helps, of course. Even the “slowest” Taycan, the $120,000 4S, has 562 hp and will break the 100 km/h barrier in just 4 seconds – quicker than most of Porsche’s sports-car lineup, while the Taycan Turbo driven here has a staggering 670 hp, and the Turbo S 751 hp, thanks to its overboost function. Activate launch control from a standing start – make sure there’s enough room in front of you – and you’ll feel slightly dizzy, such is the acceleration. More importantly, at pretty much any speed, the electric motors’ instantly-accessible torque (unlike a gasoline engine, you get all of it, all of the time) make the Taycan an incredible point-and-shoot machine; squeeze down on the right pedal and you’re teleported to where you want to be, seemingly in an instant. 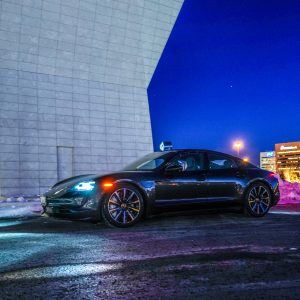 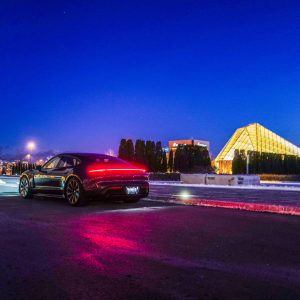 What’s brilliant, and surprising, about the Taycan, is that it combines all this power and speed with perfect control weights, brilliant damping, and even amusing electric noises, to deliver a driving experience that’s far from merely digital. It starts with a seating position, and view out the windshield, that’s a carbon-copy of a 911’s, from the way you sit low with your legs stretched in front, to the way the view ahead is framed by the curves over the fenders. It continues with the tuning of the accelerator, which doesn’t deliver all the torque in a great big slug, but lets you meter out the power with the same satisfying precision as a gasoline Porsche; and the brakes, which, while using a regenerative function rather than the actual discs and pads most of the time, have wonderful feel and tactility. 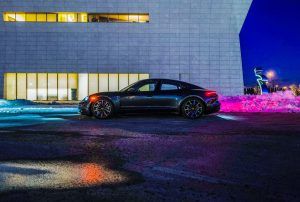 It handles, too, thanks to standard height-adjustable air suspension, a staggered wheel-and-tire setup, and the weight of the 93.5-kwh battery slung low, low, low in its chassis. The Taycan is no lightweight – indeed, it weighs more than some Cayenne models – but it carves corners with confidence and precision, and as you would expect, can maintain surprising speed down a curving road or challenging off-ramp. Downsides? Lift-off regeneration is either on or off, not variable like on some other electric vehicles, meaning you can’t “gear down” for corners to engine-brake and recharge at the same time; super-rough surfaces can sometimes confuse the air springs and induce a clump or two; and hustling all that heft will quickly torture the tires, if not the chassis. 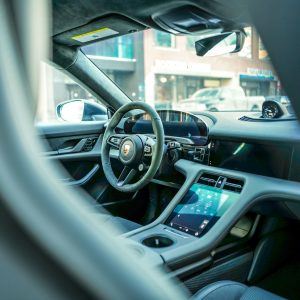 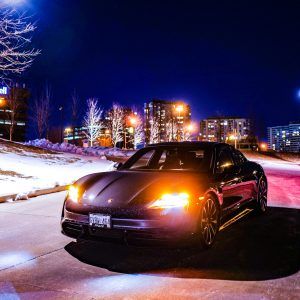 There is, of course, much more to the Taycan than the driving experience, and it’s here that you’ll find a lot to adapt to. The all-glass cockpit is probably the biggest change from other Porsches; the only physical buttons are for the windows, mirrors, and hazard lights, with everything else controlled through two large touch panels. Fortunately, Porsche has resisted the urge to go wild with extra apps or configuration options, and has kept the interface relatively clean and uncluttered. While I wish that some of the controls, such as the volume, temperature, fan speed, and especially the air vents (which you now have to aim by dragging your finger on the touch screen) remained physical, their digital equivalents are acceptably responsive, and allow for over-the-air updates down the road. 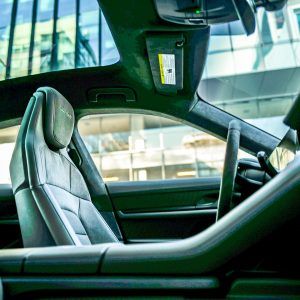 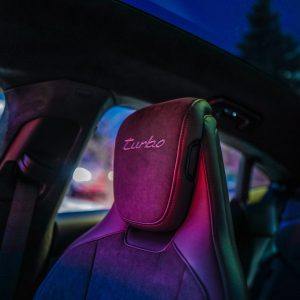 Other than the screen acerage, the feel here will be familiar to Porsche enthusiasts, from the seating position, to the perfect placement of the pedals, the high console that bends up to the dash, and the overall build quality. The door handles and some interior pieces are recognizably shared with the new 911, the materials (vegan or standard leather, complemented by real metal and soft-touch plastic) are of superb quality, and other than straight out the rear, visibility is excellent. While the Taycan’s trunk isn’t huge – its floor is high, and it’s not super-deep – it’s complimented by a “frunk” as well, which has enough space for a soft bag or two. 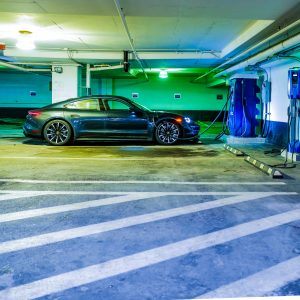 What about range? If, like the vast majority of Taycan customers, you have a driveway or a garage where a charging station can be installed, you’ll have no issues at all. With a 220-volt outlet, you’ll leave home every morning with a full “tank,” the car programmed to pre-condition itself so it’s already at your preferred temperature, the seats heated up, and the windows clear. Even in the winter, range on a full charge for the Taycan Turbo is upwards of 350 km, giving you plenty of flexibility to make spontaneous trips. For longer journeys, the increasing commonality of DC fast-charging stations along major highways also means that you can top up your charge in the time it takes to have lunch or a relaxed coffee. 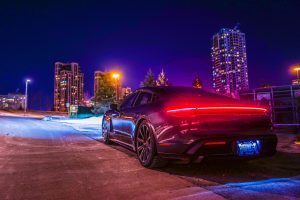 My own personal circumstances – a slightly older downtown condominium without a charger in the garage – would, in theory, make life with a Taycan slightly less convenient, but it’s actually surprising how many public charging options there are in Toronto, many of them free. There are already over 600 level-2 AC chargers in the city, and over 80 DC fast chargers, many of them conveniently located in office towers or close to shopping and entertainment, and the Taycan’s substantial range would, even with my heavy vehicle use, only necessitate charging every couple of days. Nevertheless, charging at home is still the preferred option, not least because trickling e-juice into your Porsche overnight, rather than regularly dumping it in via a DC charge, will extend the life of the car’s battery. 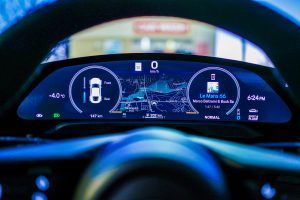 As Porsche’s first full-electric vehicle, the Taycan is not without its first-generation foibles, many of them connected to all its new tech. The high-res rear-view camera, positioned low on the rear diffuser, is always coated in grime thrown up from the car’s flat underbody, rendering it pretty much useless, even if you only washed the car a few minutes or city blocks ago. And you need to manually enable regeneration under braking at the beginning of every drive, meaning more finger-tapping – while the settings for seat/mirror position, suspension, active safety systems, and more, are all saved with the memory switches. 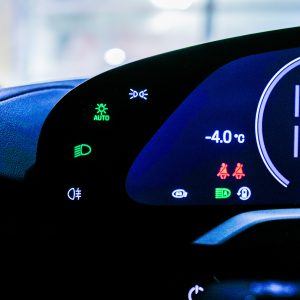 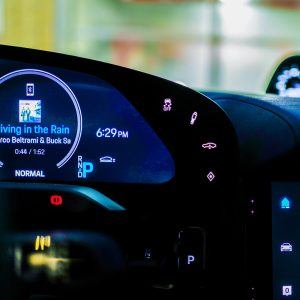 The Taycan is far from being a perfect vehicle – there’s so much about it, and about driving electric in general, that’s still new, that it won’t slide seamlessly into every lifestyle, or every possible use case. Some of its tech, such as the 350-kw charging, user accounts tied to the cloud, and more, is sufficiently ahead of its time that you’ll only derive the benefits months and years down the road, as the infrastructure and software catch up. But it’s all that newness in combination with all the traditional Porsche virtues of speed, responsiveness, and perfect controls, that makes the Taycan so exciting as well. 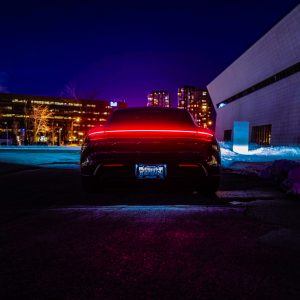 The Taycan is not just a landmark for the Porsche brand, the most important car in its history since the 911, and the most talked-about car of 2020. More importantly, it’s a car that’s lovely to live with and drive, and a car that reassures us there’s lots to look forward to in an electrified future.