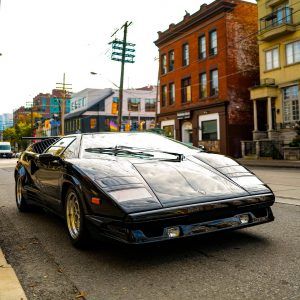 It’s been a while since I’ve written about a car – nothing new was happening, at least nothing new for me. But this weekend I experienced a car that has left a lasting impression and more importantly changed how I look at certain cars.
About a month ago, Pfaff Reserve Toronto sales manager Edward Wang and I were brainstorming about promo video that would help show our audience what we stand for at Pfaff Reserve. With a wide variety of different cars from different ages and brands in our current inventory we felt the time was now to showcase what we do.
Some conversation and a few cars and a few characters later, I ended up being cast as the Countach guy. 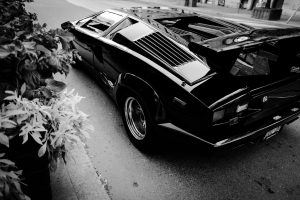 Thinking about what a Countach owner would look like, all I kept thinking about and laughing about was being in the presence of cocaine in the eighties; after all, our most recent cultural exposure to the Countach came by way of The Wolf of Wall Street. In that movie, Leo was less than capable of driving the 25th-anniversary Countach home, but he got it done; the Countach has also starred in movies like Speedzone, the Cannonball Run movies, and on the Miami Vice TV show. It’s important to note that only two of those actually involved drugs – but I’m certain I’m not the only person who thinks this way about this specific Lamborghini.
In any case, while researching the purchase of our 1989 25th-anniversary car ahead of Pebble Beach, I learned quite a bit about the Countach, and quite frankly, I was blown away by the stats. Production started in 1974 and went until 1990; only 1983 cars were built; and of them 610 were 5000 QV’s like this one. For comparison’s sake, the Ferrari Testarossa was built between 1985 and 1991 and more than 7,000 made it off the line – without including the  512TR and F512M variations! 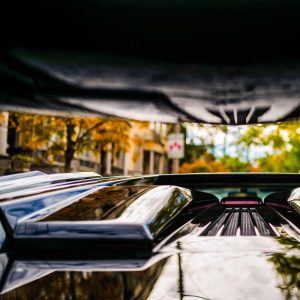 Lamborghini at the time was maybe about double the size of Pagani today in terms of production, and likely exclusivity. As production reached the late 80’s, the 5000 QV was amongst the most numerous; it’s widely regarded as the best driving Countach, and now, I was about to get behind the wheel and understand what that actually means.
Our 25th-anniversary Countach was originally delivered in the U.S., and to date, has covered just 7,950km. It underwent a major service back in March this year, and well it shows just like its mileage and service records indicate – she’s a beauty! The week leading up to our scheduled shoot was a hectic one to say the least, so we didn’t even get a chance to put it on a hoist to ensure I’d live through this weekend – we pulled it out of the Pagani showroom, and off I went into the unknown. 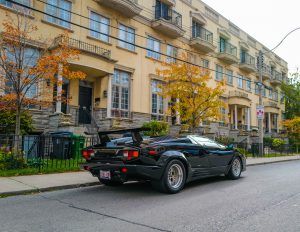 First things first, after nestling into this 30 year old hypercar, it became very clear the thinking was the driver must conform to the car. There is no grey area here: at 5’9″, I would say I was the max the Countach could handle after shutting the door and letting the sense of enclosure set in.
Uncomfortable and weird were the only words running through my mind at this time – the left front wheel well takes up 50% of the driver’s footwell forcing, your feet inwards to the center of the car. The steering wheel is far away, and my hands are stretched out to the max. The steering wheel itself looks like it was removed from an 80’s video game – small, round and, well, that’s about it. 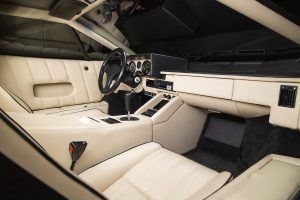 Look around and reach for the controls and everything is there and everything works. Slick digital HVAC controls, hidden seat controls, lighting controls and radio were all within reach and felt robust.  Turning the key, the the V12 came to life holding a steady 2200rpm idle. So smooth and loud that you could hear the valvetrain lashing through the pointless glass behind. As the temperature rose, she settled to an environmentally friendly 1,500rpm, and I finally realized she wasn’t dropping any more than that. Push on the clutch, grab first – and I was off.
The first thing to notice is the Countach is geared tall; it’ll do 0-60 mph in first gear, which is where that clocked 4.5 seconds comes from. The 5.2-litre 12 has the torque to pull it through, and after grabbing second, it’s clear the Countach is not quick, but it is very powerful. As the engine and gearbox climb to operating temperature, the drive becomes smoother and more enjoyable; as I melted into it, I found the best position to contort my body – now part of the car, and frankly, I’m starting to drive it fast. 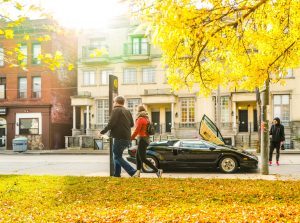 Across the 407 and down the 427, I hit traffic just south of the 401, and immediately my anxiety started to build. Could she sit still and not die? Could I?  If anyone managed to catch my Instagram story from the weekend, I couldn’t help but be surprised how absolutely amazing the Countach was when caught in traffic – engine temp pegged in the middle of the gauge, perfect and steady idle the whole time, very impressive mechanically. The complete opposite of what I thought was coming.
Sunday morning, it’s shooting day and time to head downtown. And from this moment forward the way I look at this car will never be the same.
I pulled out of my underground and I noticed a young family walking across the lot, all four of them stopped in their tracks, all of them pointing, with smiles from ear to ear – they were inspired, mom and dad as well. I hopped on the Lakeshore and cruised with every single car around slowing down for a thumbs up and smile. Maybe this sounds normal for the average supercar driver, but I have driven every kind of supercar around Toronto, though – yes, you get the good, but you also get the bad – smart-ass remarks and stupid comments – but not in the Countach! 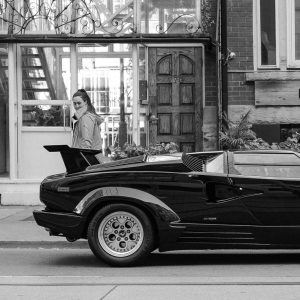 The third scene of our little production, which you’ll see soon, was at Trinity-Bellwoods park. I parked on Queen Street and let it all begin. Person after person, car people, non-car people both, would walk right up, stare, look around, talk, take pics and laugh and smile! It’s like the car would endlessly pull you back to a more innocent time – the Countach is not just a classic supercar, it’s a pop culture icon.
Throughout the day, every kind of person I can imagine stopped to give the Lamborghini a moment – they just couldn’t help it. Our shoot eventually ended up – where else – in Yorkville, an area that’s no stranger to supercars rolling down the street. And the Countach shut the place down. With zero regard for traffic or pedestrians, people would rush over to take the best pic, examine the car closely, block my path as I was driving. 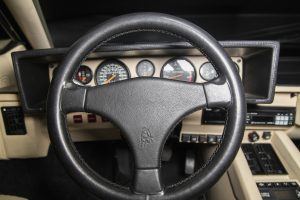 It was overwhelming to say the least, but all with a sense of unity – we were enjoying the car together! Maybe its age has changed the way people react to it. As I said earlier, I’m no stranger to the super car experience, where you’re always met with some level of negativity from the masses – but not in the Countach. We were all in it together, and experiencing it from the outside was just as rewarding as from the inside. It’s the kind of car that reminds us we shouldn’t take things all that seriously, that sometimes it is just about how outrageous something can be. Does a car have to be great to be impactful? Not really; sometimes it just needs to make you remember.
As a collector, I can completely understand the need to have one. It starts conversations – you can talk about how pretty it is, weird, small, fast, silly, dumb and iconic. I wont forget how I made people feel that Sunday; I feel like I added a little light to everyone’s day. And that’s what makes a car special.
–By Jimmy Vervitas, National Brand Manager, Pfaff Reserve
Previous Post Next Post