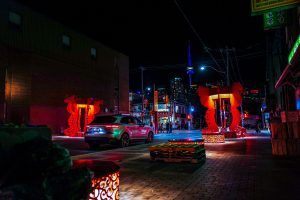 On my way home in the Porsche Cayenne e-hybrid after a drive that took me from Pfaff Porsche in Vaughan to a couple of photo locations downtown, I stopped at my usual Chinatown takeout spot and came to an interesting and revelatory realization. My drive, unlike the takeout I was about to consume, had been entirely emissions-free – a remarkable feat for a full-sized SUV weighing close to 2,300 kg and with the ability to dash to 100 km/h in 5 seconds. 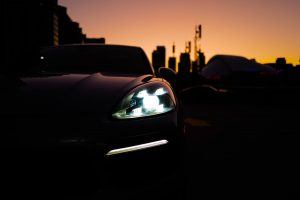 The 2019 Cayenne e-hybrid is not Porsche’s first plug-in hybrid; in fact, the previous generation Cayenne introduced the e-hybrid concept to the brand’s model lineup. But in terms of its capability, the integration of its various systems, and its overall versatility, it’s a huge step forward in every respect. 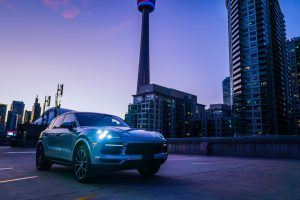 The new e-hybrid’s 40-km range on electric power alone means that, should you have a charger at home and at work, you could potentially do all of your commuting emissions-free, while still retaining the power and range of a combustion engine for long highway drives. But what’s more impressive about the e-hybrid’s setup, which combines a 134-hp electric motor with a turbocharged 3.0-litre six, is how seamless and familiar it all feels. The electric motor actually drives through the same eight-speed automatic gearbox the gas engine uses, and when the engine does cut in, it does so in such a smooth, quiet fashion that you barely notice it. Indeed, in most driving situations, only the transition from regenerative to conventional braking gives away the fact that this is a hybrid at all, no matter what drive setting you’ve chosen. 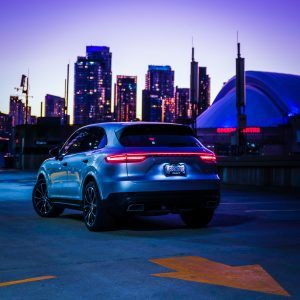 Equipped with the optional sport chrono package, you can continue to choose drive modes with a convenient knob mounted on the steering wheel. Fire up the e-hybrid and, presuming you have some charge, it defaults to zero-emissions driving from the start, with conventional hybrid, sport, and sport plus modes available depending on your desired level of aggression. Throw it in sport plus, and the plug-in Porsche makes angry noises and jumps at every touch of the throttle, the electric motor’s instantaneous torque filling in where the gas engine’s turbocharger would normally lag; indeed, it feels like a super-responsive, large-displacement engine rather than a hybrid. It’s only in aggressive cornering that you feel the extra weight of the batteries (200-plus kg versus the conventional 3.0 turbo six model), but a staggered wheel/tire setup, and on the car you see here, 21-inch tires and Porsche Active Suspension Management still create awesome grip. 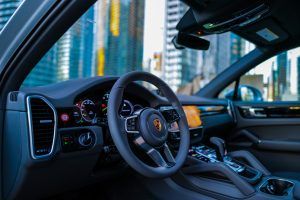 As for the rest of the package, it’s familiar from the more conventional Cayenne, and expectedly excellent. There’s significantly more room than in the previous generation, the dashboard is a festival of high-resolution touch screens and capacitive controls, and the instrument panel still features a central analogue rev counter (now with green needle) flanked by two screens you can configure to your heart’s content. From the red LED strip running across the entire rear of the body to the available paint finishes to the materials used inside, there’s a slick, high-tech aura to the new Cayenne that’s hard to explain, but which is immediately noticeable – and it’s one reason Porsche continues to be able to command such a price premium in the market. 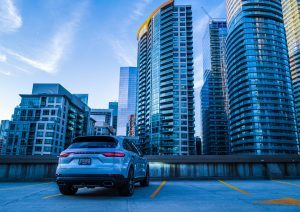 The best part of the Cayenne e-hybrid is that, thanks to its plug-in capability and that emissions-free driving range (don’t forget this means you also get green plates and access to HOV lanes in the Greater Toronto Area even when you’re by yourself), it completely lives up to the promise of its design. Priced at less than the conventionally-powered Cayenne S, it is faster 0-100 km/h (if not in top speed), significantly more efficient, and a just a more interesting and forward-looking drive. 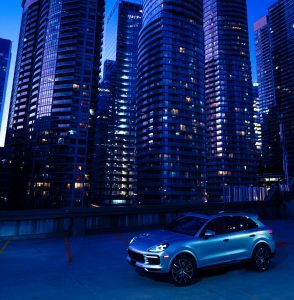