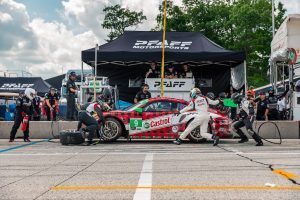 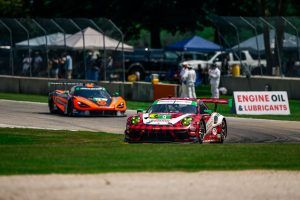 ELKHART LAKE, WI – August 7, 2019 //Hot on the heels of their first win in the 2019 IMSA WeatherTech GTD season, Pfaff Motorsports captured their second victory in as many races as the team travelled to Road America –the longest circuit on the calendar. 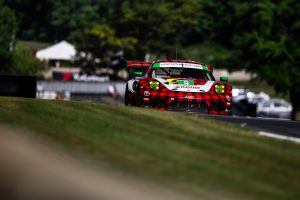 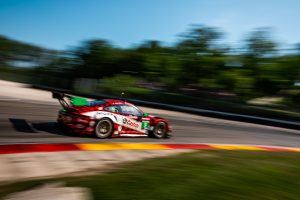 As the first-year team continues to test and develop, Pfaff welcomed Porsche Young Professional Matt Campbell (AUS) to race alongside full-time driver Zach Robichon (CAN) for the two-hour and 40-minute sprint at the 6.515-km (4.048 mi) Wisconsin circuit. The weekend marked the Australian’s first visit to Road America, and Robichon’s first in the Porsche 911 GT3 R. 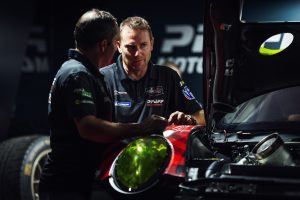 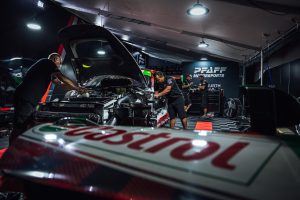 The team tested various setup options through the Friday and Saturday practice sessions before returning to an earlier setup for qualifying on Saturday, with which Robichon placed the Castrol-liveried Porsche in fourth position ahead of Sunday’s race.

Starting the race under sunny skies, Robichon wasted no time in advancing positions, jumping a competing McLaren on the first lap, then moving up into second by lap 13 of 75. 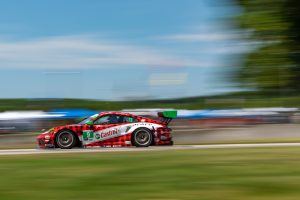 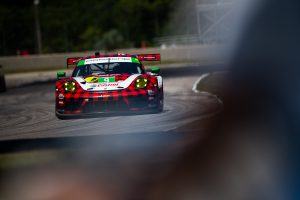 The Canadian held a steady pace throughout his stint before diving into the pits behind the first-place Lamborghini and handing the car off to Campbell on lap 23.

From there, Campbell began to pick away at first, mixing strong lap times and fuel conservation that allowed him to stay out for an additional lap during the second round of pit stops. When the first-place car pitted for its second and final stop, Campbell was given the green light to push the GT3 R and he moved into first place on lap 49 with just under one hour remaining. 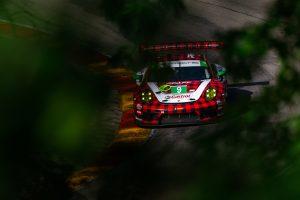 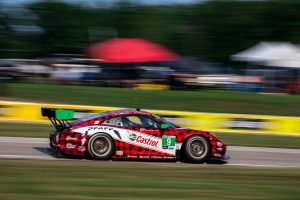 Lap by lap, the Australian began to extend the team’s lead and by the final flag, and Campbell brought Pfaff its second victory of the season – adding a win at the longest track of the year to a win at the shortest (Lime Rock Park). 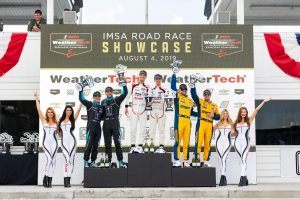 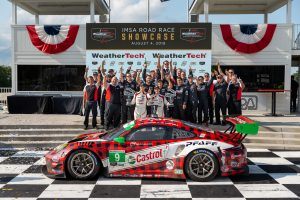 Lap by lap, the Australian began to extend the team’s lead and by the final flag, and Campbell brought Pfaff its second victory of the season – adding a win at the longest track of the year to a win at the shortest (Lime Rock Park).

“It was really a great race for the entire team,” Campbell said. “At the beginning of the weekend we were working really hard to get a proper setup, and in the end thankfully we got it right. We had great pace – Zach was able to come from P4, box in P2 and I took over and we were able to capture the Lamborghini quite quickly. It was a bit of a struggle to actually get past, so I settled in and bided my time to save as much fuel and stay as close as possible. We were able run a lap longer and jump him in the pit stop. But it was the shorter stint towards the end was probably the most important part of the race.” 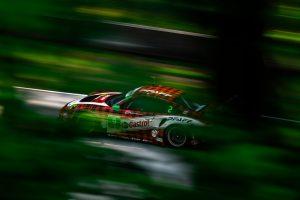 For Robichon, the result was a culmination of hard work and determination on behalf of the entire Pfaff team.

“We didn’t have the easiest weekend until qualifying,” he said candidly. “We struggled a bit to get the car in the window we wanted, but the crew was here all night on Friday, taking the car apart, checking every part, changing the steering rack, the dampers and the springs, and all of a sudden the car came alive, so we knew we had a setup to work with going into qualifying.”

Robichon said of the Pfaff crew: “If there’s one thing that’s consistent with everyone here, it’s that when they put their heads down and make a change to the car, it always gets better. We had the car set up so that it would be strong in the early running, and based on our strategy, it performed exactly how we wanted. In the end it was about managing the car, just as I’d hoped, and handing it off to Matt, who obviously performed well with it as well – it was just a great effort by the entire team, so hats off to them.”

That sentiment was shared by Pfaff Motorsports team manager Steve Bortolotti, who worked hard to carry forward the winning momentum from Lime Rock.

“It was a challenging weekend for us initially,” Bortolotti said. “We struggled a little with the feeling of the car from the very first practice. Despite that, everyone remained quietly confident in our ability to get the car to where it needed when it mattered, and worked tirelessly to ensure each person did their part to turn the weekend around.

“This was a real team effort,” he continued. “I’m so proud of the effort Zach, Matt, and the entire Pfaff Motorsports crew showed. It was a great execution on all levels, and everyone can hold their heads high for that.”

The victory moves both the team and Robichon into third place in the 2019 IMSA WeatherTech team and drivers’ championships, and Robichon jumps into first place and a five-point lead in the drivers’ sprint championship with just two sprint rounds remaining.

The team takes a two-week break before returning for round 8 at Virginia International Raceway (VIR), taking place in Alton, VA from August 23 to 25.