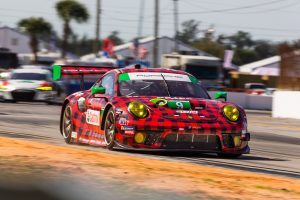 SEBRING, March 15, 2019 //
Coming off a heartbreaking blow that saw an early exit from the
season opener at the 24 Hours of Daytona, Pfaff Motorsports has returned for round two of the
2019 IMSA Weathertech SportsCar Championship and the 12 Hours of Sebring with a newly-rebuilt
chassis and its sights set on redemption. Dubbed the “Super Sebring” weekend, the IMSA series is
joined by the FIA World Endurance Championship from Europe, bringing the top marques of racing
worldwide to the famed track.

Returning with Canadian drivers Scott Hargrove, Zach Robichon, and Lars Kern from Germany, the
trio completed a successful test at the Florida circuit earlier this month with their refreshed plaid livery
Porsche 911 GT3 R to prepare for the team’s first 12-hour race. The race marks Kern’s first at
Sebring, while Hargrove and Robichon have raced and won here previously as part of the Porsche
GT3 Cup Challenge series. 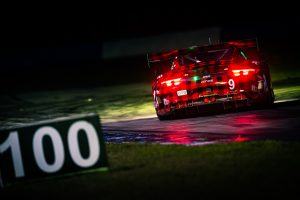 “Coming in to Sebring, I think our preparation is just that much better compared to Daytona,” Kern
said. “Being 24 hours, Daytona was the biggest race and our first – but now, for the 12 Hours, we’re
more well-sorted, everything’s calm, and after the test, we’ve nailed the car.”

For Pfaff’s most recent racer and winner at the circuit (2018 Porsche GT3 Cup), Robichon is equally
optimistic going into his first 12-hour race.

“Coming into this week, we knew we had a good starting point after our test,” Robichon said. “We
made a couple minor changes going into the first practice today and ended really strong, even on
older tires. This is a circuit that’s very demanding but also a lot of fun. The team has done a great
job to get the car where it needs to be, so for us it’s all about going out there and delivering.”
Team manager Steve Bortolotti attributes the positive attitude going into the weekend to both Pfaff’s
and the driver’s experiences with the Porsche platform at the legendary racetrack.
“Our success in practice so far isn’t all that important, but we have the car in a place where all of
the drivers are happy and it’s easy on the tires, which is important,” he said. “It looks like we could
have some interesting weather over the weekend, so I think we can apply some of those lessons
we’ve learned over the years racing here in the [Porsche] Cup. We’re fortunate that we’re not new to
the track – obviously we’re new to the 12-hour – but we have some good information to draw from
as well.” 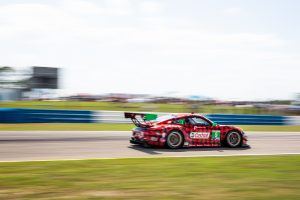 Hargrove’s last visit to the Florida circuit was in 2017 with the Pfaff squad, when he became the
first driver globally to win in the 991.2-generation Porsche GT3 Cup car. For 2019, he says the
team’s goals are just as high.

“We had a good test here, so the team has a really positive outlook going into the race,” he said.
“Zach and I learned a lot at Daytona, and we’re continuing to do so, but the GT3 R has been great
over the bumps here at Sebring, which is really important. We have the car set up where we want it,
and it’s a really great track and atmosphere to race in, so we’re really looking forward to Saturday.
“The team really showed how capable we are at Daytona,” he continued. “We’re hoping – and
expecting – that will translate here and we’ll get the result we’ve been working so hard towards. It’s
a great weekend and a legendary race, so I know I speak for all of us when I say we can’t wait to get
on track.”

Canadian viewers will be able to view the action live from Sebring on the Discovery Velocity
channel, while U.S. viewers can watch the broadcast on NBC Sports. In addition, TSN will be airing
one-hour shortened telecasts of IMSA races throughout the season in Canada.