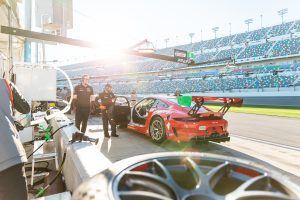 Coming off a successful inaugural test at the Roar Before the 24 at Daytona International Speedway this weekend, Pfaff Motorsports gained a great deal of experience and information as they head into their first IMSA WeatherTech GTD race at the 24 Hours at Daytona later this month. 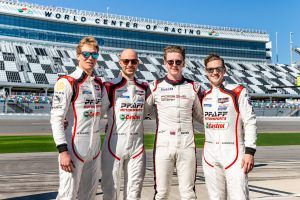 Participating in all six on-track sessions between Friday and Saturday last week, the new driver lineup of Porsche factory driver Dennis Olsen (NOR), Lars Kern (DEU), Zach Robichon (CAN), and returning driver Scott Hargrove (CAN) were able to shake down their Porsche 911 GT3 R and place it as high as seventh position in the final night session on Saturday. The Roar test also marked the first time Robichon was able to get behind the wheel of a GT3 R, which is all-new for 2019. 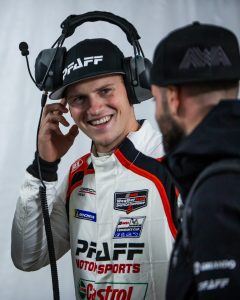 “It was a fantastic experience to finally get on track at the Roar. Having never driven a GT3-spec car, and being my first time at Daytona, there were a lot of firsts to cover, but I felt very comfortable with everything,” Robichon said. “The GT3 R is a great platform and the improvements over our sessions were a great positive to build upon heading into the 24.” 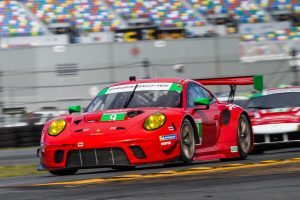 Hargrove, who pulled double duty driving both the GT3 R and the Pfaff-sponsored Cayman GT4 Clubsport MR for AWA Racing in the GT4 class this weekend, was equally impressed with the improvements to the new 911.

“This new GT3 R was as stunning to drive as it looks,” Hargrove said. “It’s a massive step from what the car was last year on every front, but it still feels familiar. We were able to gain as much information as possible as we could over the two days, and there’s still room for improvement, which is massively positive. Now it’s up to us to analyze the data and put the pieces together for the big show.” 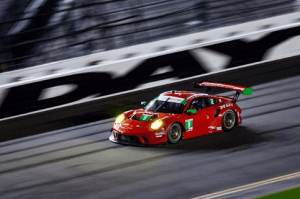 For chief engineer Andrew Marangoni, there were a number of key points to focus on as Pfaff Motorsports enters its largest sports car effort, and first season of endurance racing.

“We’ve worked our way up the ranks of North American sports car racing and have learned an incredible amount along the way, but we certainly didn’t expect to enter the Roar without any challenges,” he said. “The IMSA WeatherTech series is the pinnacle of the sport in North America, so everything from personnel to equipment, the car and order of operations needs to be meticulously prepared. 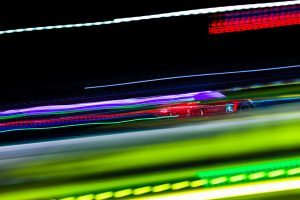 “The Roar allowed us to identify any and all issues with the car and our team, and implement corrective actions prior to the 24,” Marangoni continued. “We now have a plan in place, so I’d certainly classify the Roar as a success for our program.”

Continuing their assessment of the team’s first test with a new driver lineup, Marangoni was hugely impressed by the effort put forth by each driver this weekend. 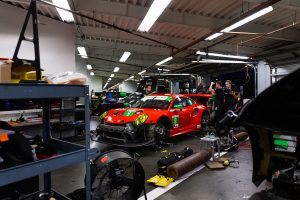 “It was an absolute privilege working with Olsen, Hargrove, Kern and Robichon,” Marangoni said. “All four drivers are absolute professionals and provided excellent feedback and input, which is a trait coveted by any engineer. Most encouragingly, all four drivers provided very similar commentary on the performance and handling of the car, which allows us to progress with our testing and enhancement of the setup overall.

“For Zach, I think he surprised a lot of people with his ability to get up to speed in his first time in a proper GT3-spec car,” he continued. “But having competed against him for years in the IMSA Porsche GT3 Cup Canada, it was no surprise to us – we know what he’s capable of.”

Looking ahead to the team’s first race at Daytona, team manager Steve Bortolotti saw a large number of positives to build upon.

“Overall, the crew performed very well,” Bortolotti said. “There were a few teasing issues with the car which is to be expected on its first outing, but it was nothing our team wasn’t able to resolve, and it also gives us a wider knowledge base as we prepare for the 24 over the next few weeks.

“Our drivers also gelled quickly, which was great,” he continued. “Each of them have similar personalities, and there are already existing relationships between Lars and Dennis, and Zach and Scott, so they got off to a smooth start right away.”

With just two full weeks before the team returns to Daytona, Bortolotti has a full schedule planned at Pfaff Motorsports headquarters to ensure all bases are covered.

“We have a great team of engineers, strategists, mechanics and of course, our drivers,” he said. “Over the next couple weeks we’ll be holding numerous meetings in the shop with all of our staff. We’ll be working out the final preparations of the car, our systems and our tools, and look forward to returning to Daytona with the added experience that we were able to gain from the Roar. Everyone at Pfaff is excited and focused on the challenge ahead, and we’re looking forward to getting back [to Daytona] for our biggest race yet.”

Pfaff Motorsports returns to Daytona in two weeks to compete in their inaugural season of the IMSA WeatherTech series and the 57th running of the Daytona 24 Hours, taking place from January 24 to 27, 2019.