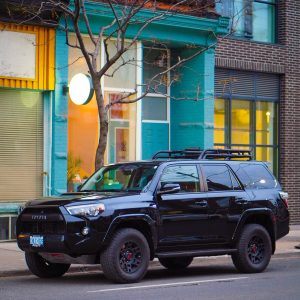 The Toyota 4Runner TRD pro is so tall, 6 feet eight inches, that it doesn’t fit into a regular Toronto underground parking garage – or at least, the parking garage of the downtown condominium that I live in. During the four days I spent with it, I therefore had to park it across the street from home, necessitating not only downtown Toronto parking dollars, but also a little walk in the rain every time I needed to get to it. 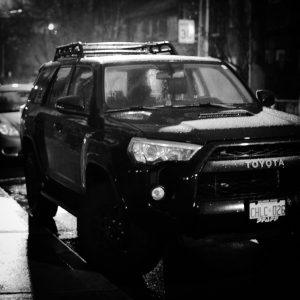 Driving the TRD Pro was expensive and inconvenient, and yet I’m totally in love with it.
There’s something refreshingly old-school about the 4Runner that I’ve loved for as long as it’s existed. Tall, tough, and boxy, it’s one of the few SUVs left on the road that hasn’t been watered down from its original form to become a smooth, anonymous crossover. Even in its most luxurious versions, it’s still built on a tough truck platform, still has that classic 4Runner seating position (high off the ground, but with low seats and your legs stretched out in front), and it still looks like a truck. 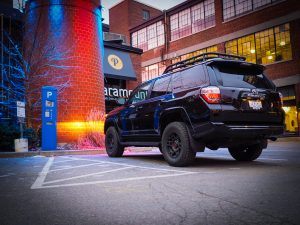 For the longest time, the 4Runner was the only vehicle in Toyota’s lineup that had any real character to its design, and while these days Toyota’s really stepped up on the styling front, it’s still a standout, with its aggressive face, upright profile, and rugged detailing. The TRD pro really ups the ante, too, stripping off all the chrome trim and replacing it with matte- and gloss-black accents, a shortened rear bumper that improves the approach angle, and giant 31.5-inch Nitto off-road tires mounted on matte six-spoke alloys. The crowning achievement, literally, is a “basket” roof rack that looks ready for a month-long back-woods expedition, but which also kills its ability to fit into those undergrounds. 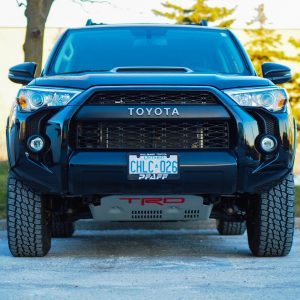 The butch looks aren’t just for show, either. In addition to the massive tires, the TRD Pro’s suspension has been lifted by an inch, and enhanced by the addition of Fox remote-reservoir off-road shocks – they’re complex, very expensive, and can be found on top-flight off-road racers, from Baja trophy trucks to off-road Porsches. An electronically-controlled locking differential enhances the old-school four-wheel drive system with low range, and two roof-mounted driving mode knobs let you alter the controls for different kinds of terrain, and to adjust and maintain a set pace down challenging gradients. (Fun fact: you know what else has roof-mounted driving mode knobs? The McLaren Speedtail.) 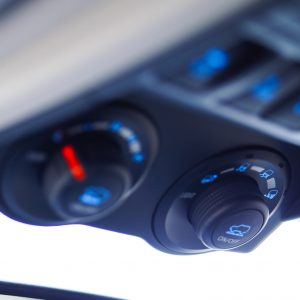 For al of the off-road hardware, the most surprising thing about the TRD Pro is just how comfortable and refined it is on-road. The ride quality is a particular standout: you would think the lift, the knobbly tires, and the off-road suspension would make the big Toyota less comfortable, but the exact opposite is true; it rides over rutted urban pavement like a luxury car, the tall sidewalls and remote-reservoir shocks soaking up bumps big and small. (In hindsight, I shouldn’t have been surprised; in 2008, when competing in the Transsyberia Rally, our Porsche Cayenne was also fitted with Fox Shocks, and could tackle rocks and sand dunes at incredible speeds with grace.) 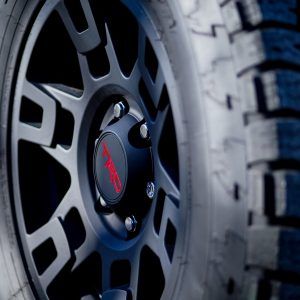 The drivetrain’s superb refinement should have been less of a surprise. Toyota has always made smooth, silent engines, and the 270-hp 4.0-litre V6 and five-speed automatic transmission have been in production long enough that they perform seamlessly together. More than once, I forgot the engine was actually turned on and tried to start it again; and shifts are so imperceptible at any speed that it feels almost like the 4Runner has a CVT transmission. On the flip side, fuel consumption, with the blocky body, five forward gears, and mudder tires, isn’t great; the transmission could use an extra gear to make highway running easier, and the truck never really feels quick, despite reasonable acceleration off the line. 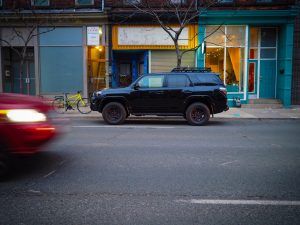 No surprise that it handles like a truck, either, given the suspension and the looks, but there’s a refreshing honesty to the way the TRD Pro drives that I really enjoyed. The steering is unsurprisingly heavy, but it’s appropriately weighted, and quite precise; the body rolls quite a bit in corners, but it never feels insecure; and the brakes, with serious-looking four-piston calipers up front, slow the hulk down with authority. Particularly in the high-riding TRD Pro, you quickly adopt a relaxed, somewhat superior-feeling attitude while driving the 4Runner – making good progress, but not feeling the need to speed and make quick lane changes; there’s something majestic in the way that it looks and moves that slows you down a bit. 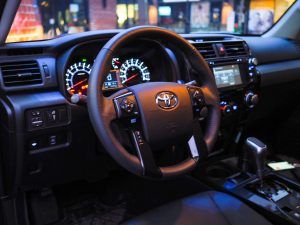 At just under $57,000, the TRD Pro (4Runners start at just over $46k) isn’t cheap, and if you’re looking for the latest in luxury or technology, you may want to look to a more conventional crossover. The dash is big and blocky, the infotainment system is Toyota’s last-generation one, and there aren’t any fancy driver assist features beyond big mirrors and excellent visibility. But the seats, covered in Toyota’s proprietary soft-tex faux-leather, are awesome, the JBL sound system will stand up against any luxury-car system in power and clarity, and, being a Toyota, you just know it’ll last forever. 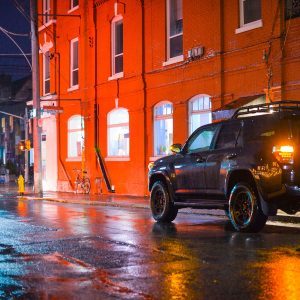 It’s not a truck for everyone, the TRD Pro. But if it’s your kind of truck, there’s nothing quite like it on the market.
Previous Post Next Post