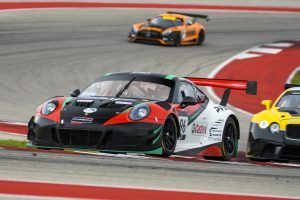 After a historic rookie-year championship in Pirelli World Challenge GT Sprint, Pfaff Motorsports announced today that it will move to the IMSA WeatherTech SportsCar Championship in 2019. The team will contest the seven races in the Sprint calendar with a new 2019 Porsche 911 GT3 R and drivers Scott Hargrove and Zacharie Robichon.

“I couldn’t be more excited to enter the IMSA WeatherTech Sprint Championship in 2019,” said Steve Bortolotti, team manager. “We have long targeted this series as where we ultimately want to bring our program, and the new sprint format allows us to make that transition sooner than expected. We are working hard with our commercial partners to be on the grid for all the endurance events in the near future, and are thrilled to contest the sprint championship as well as Petit Le Mans in 2019. Our relationship with Porsche Motorsport North America has been incredible over the years, and we are excited to begin another new chapter of our company’s racing history with a marque we have passionately represented for over 50 years.”

“The success of Pfaff Motorsports over the last two seasons really showcases how determined we are as a team,” said Scott Hargrove. “When I joned Pfaff in 2017, I never could have imagined where it would take us. Moving to the IMSA WeatherTech series with the new 911 GT3 R is a dream come true. Fresh off the 2018 GT Sprint Championship in Pirelli World Challenge, I’m confident we can transition and make an impact right away. There will be new challenges like dealing with other classes of cars, refueling, and significantly longer races. I’m excited to have Zach joining our all-Canadian team – we were teammates racing Formula 1600, both in Canada and Europe, and again in 2016 racing Porsche GT3 Cup. I know he will be very quick, and that will allow us to focus on the details necessary to become a winning team.”

“I’m looking forward to moving into the WeatherTech championship. It’s the pinnacle of sportscar racing in North America and the opportunity to compete at that level is one that I’ve dreamed about for a long time,” added Zacharie Robichon. “It will be a tough transition from a one-make sprint series to GTD, but I’m up for it. I had the task of competing against Pfaff Motorsports in 2016 and 2017, seeing first-hand their ability to produce race- and championship-winning cars, and their results in 2018 speak for themselves. I couldn’t think of a better place to compete in 2019, and this will be the fourth time Scott and I will race as teammates. I know we’ll push each other to get the most out of the car. His experience in the GT3 R means I’ll be leaning on him a lot to learn.”

Dr. Daniel Armbruster, President and CEO, Porsche Motorsport North America, said: “The move of Pfaff Motorsports into the IMSA WeatherTech SportsCar Championship GTD class is another great example our pyramid system at Porsche Motorsport North America. It is encouraging to see Pfaff, one of the largest Porsche dealerships in North America, utilizing motorsport competition to take their own brand identity to the next level. From track days, to the IMSA Porsche Ultra 94 GT3 Cup Challenge Canada by Yokohama, to the Pirelli World Challenge, the Pfaff racing team has won championships each step of the way. Their drivers, Scott Hargrove and Zach Robichon, each Porsche Young Driver Academy graduates, have won the last two GT3 Cup Challenge Canada titles. Now, all of the pieces have come together with their entry into the IMSA WeatherTech Championship. We are proud as they are a true example of the Porsche ‘way’.”

Pfaff has provided driving and talent development opportunities in karting through the Pfaff Pole awards in the Sunoco Ron Fellows Karting Championship, the Pfaff Driver of the Day awards in the Champion Ron Fellows Karting Championship, and title sponsorship of the national-level Pfaff Kartsport Cup. In 2017, Pfaff also launched a national online racing championship in partnership with Cineplex and WorldGaming to bridge the divide between the real and virtual racing worlds.

The 2019 IMSA WeatherTech SportsCar Championship Sprint calendar kicks off at the Mid-Ohio Sports Car Course in Lexington, OH on May 3-5. Follow @PfaffMotorsports and @PfaffAuto on Instagram for more announcements and behind-the-scenes content before the start of the season.