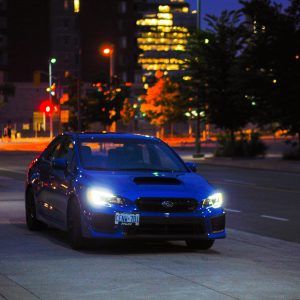 Just about the best thing about the Subaru WRX STI is how normal it looks. Give it a quick glance and you’d be forgiven for mistaking it for a modest little Japanese family sedan. Particularly if you’ve optioned the subtle lip spoiler instead of the high-rise rear wing – the price remains the same, no matter what you choose – there’s little other than the big wheels, acid green brake calipers, and some subtle badging to let you know the STI is something quite special. 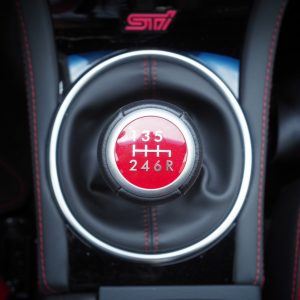 Step inside and there are a few more clues. The high-bolstered Recaro seats, for one, trimmed in red and with ultrasuede and leather inserts. A high-rise shifter for the six-speed manual, topped by a leather knob with “cherry blossom red” (uh, pink) accents. A fat-rimmed, three-spoke steering wheel stitched in red. A boost gauge dominating the digital display cluster, where normally your trip computer or vehicle options would be displayed. A knob on the centre console to adjust the action of the centre differential and vary the front-rear torque split. A 300-km/h speedometer. Despite the conservative, some would say forgettable, interior styling, you instantly know there’s more going on here than initially meets the eye. 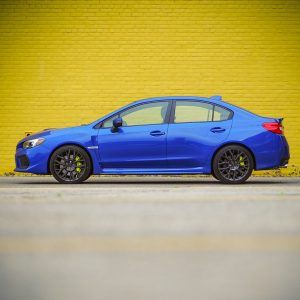 Under the STI’s hood is Subaru’s familiar 2.5-litre flat-four, topped by a whopping great turbocharger. Its ratings of 310 hp and 290 lb-ft of torque are mildly impressive on paper, but it’s the way that the engine delivers its power that makes it so special. There’s a characterful thrum at idle that immediately puts you in mind of Subaru’s rally-car heritage, the throttle is instantaneously responsive, and once it climbs up on boost, the STI really hauls, feeling far more powerful than the numbers would suggest. The appetite for revs, the strength of the torque delivery, and the noise give the STI a race-car character that is totally out of joint with its conservative exterior styling – and that’s part of the appeal. 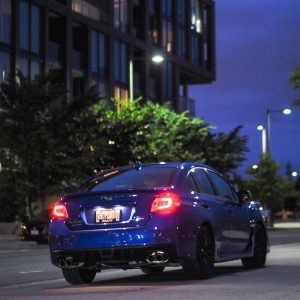 Coupled to this powerhouse is a close-ratio six-speed manual with tight, rifle-bolt shifts and a tall shifter that’s within a hand’s reach of the steering wheel. The gear ratios make it easy to keep the engine boiling, and the clutch pedal is light and easy. No automatic transmission is available, making the STI pretty unique in the Canadian market; it’s an indication that this really is a car to be driven, and driven hard. 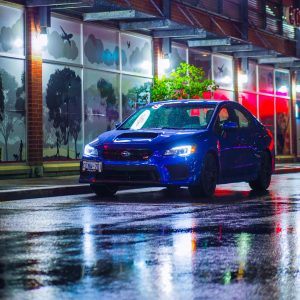 That’s something that’s obvious when you’re sitting in stop and go traffic. The STI is actually an incredibly practical package, with tons of interior and trunk space and a nicely-styled, solidly-constructed interior, but it’s not at its happiest when trickling through town. The ride is fairly stiff, and while the engine is flexible enough in its power delivery (particularly when you dial up “intelligent” on the central drive-mode controller), the STI not the smoothest or easiest car to drive slowly.
The unique, unburstable Subaru feel, derived from years of winning rally championships nationally and around the world, is something that really comes through as you start to push the STI harder and harder. Unlike a lot of cars, it gets better and better the faster you go. The engine is happier being shifted at close to redline, with a quick dip of the clutch and a slam of the shifter making it easy to keep seamless progress. The ride smooths out at higher speeds, the car soaking up big and small bumps in its stride.

And boy does the STI love corners. For a car with its engine hanging out over the front axle, it turns in immediately, with terrific front-end bite, and there’s so much grip, no matter how fast you’re going. Credit here must go to the sophisticated all-wheel drive system, which not only has a variable front-rear torque split to maintain maximum traction, but also an electronically-controlled limited-slip differential. 19-inch tires are standard on uplevel STIs (18s on the “base” version), and the brakes are terrific 340-mm vented discs with six-pot acid-green monobloc calipers in front. The drive mode controller lets you manually vary the front-rear torque split, as well as the bias of the automatic setting; I found the best setup was automatic mode with a rear bias, giving the Subaru a responsive, neutral feel without manually negating the stability advantage provided by the all-wheel drive.
There’s obviously more to the package here. A big touch-screen infotainment system with Android Auto and Apple CarPlay; clever driver-assist systems including lane departure warning; a powerful Harman/Kardon sound system; and a full load of conveniences including heated seats, power windows, mirrors, and sunroof, and more. But really, the STI is all about the driving. A conventional-looking three-box sedan it may be, but it’s one of the purest driving machines on the market at any price – let alone starting at just over $40,000, and completely loaded at just over $47,000.
Pfaff is excited to be opening a new Subaru dealership, Pfaff Subaru, in Guelph at the end of 2018. Watch this page for more information.
Previous Post Next Post