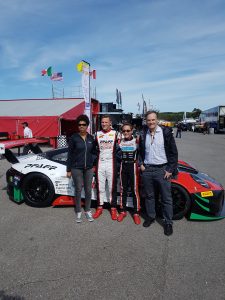 Pfaff Motorsports today announced the next chapter in its history of developing up-and-coming Canadian driving talent with the launch of the Pfaff Motorsports Junior Driver program. The race team, a division of Canadian automotive dealer group Pfaff Automotive Partners, has chosen kart racer Mackenzie Clark as its first apprentice.

Mackenzie (Mac) Clark is a young kart racer that currently drives for Trevor Wickens’ Prime Power Team in SKUSA, the Pfaff Kartsport Cup, and the Rok Cup International. Supported by longtime Pfaff Motorsports partner Castrol, Mac will begin his transition to racing cars with Pfaff’s help. The group will assist the junior driver with the development of his sponsorship package, open doors for him to pitch partners and sponsors, provide media training, and help him move to the next level of his development as a professional driver as he continues to race karts.

His tuition with Pfaff Motorsports will begin with participation in Pfaff track days to become familiar with handling cars, and Mac will shadow Pirelli World Challenge driver Scott Hargrove during race weekends. His first season as a Pfaff Motorsports Junior Driver will culminate in the CASC Celebration of Motorsport three-hour endurance race at the end of the 2018 season, driving alongside Hargrove.
“We are extremely excited to welcome Mac to the Pfaff Motorsports family,” said Pfaff Motorsports team manager Steve Bortolotti. “I first met Mac a couple of years ago and was immediately impressed by his maturity and professionalism both on- and off-track. He embodies all of the qualities we look for in a driver and Pfaff brand ambassador, and we are excited to help with his transition to sports car racing.”

“I feel honoured to be working with Pfaff Motorsports,” said Mackenzie Clark. “Moving from karts into becoming a professional driver is my dream – and now I can make that happen. My sincere thanks go out to Chris Pfaff, Steve Bortolotti, and Natalee Davis at Castrol for this amazing opportunity.”

Trevor Wickens of Prime Power Team added, “we could not be more pleased that Mackenzie is forming an alliance with both Pfaff and Castrol. Coming from an environment that prepares young drivers with the tools they need to one day move to racing cars, we are very excited that this partnership will further Mac’s motorsport career.”

Over its 50-plus-year history, the Pfaff organization has been synonymous with developing up-and-coming Canadian driving talent. In 2016, president and CEO Chris Pfaff was inducted into the Canadian Motorsport Hall of Fame for the pivotal role he played in the development of a long list of Canadian racers including Richard Spenard, Scott Goodyear, Ron Fellows, and many others.