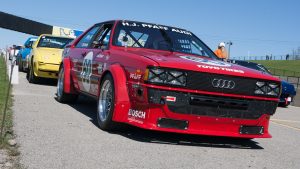 This past weekend May 12-13 at Canadian Tire Motorsport Park, the British Empire Motorsport Club held the 67th annual Spring Trophy Races. This is also the first event in the Vintage Automobile Racing Association of Canada’s VARAC Championship. Being the first event of the season, weather can sometimes play a part in the outcome but this year it was sunny skies from start to finish. The 1981 Audi 80 Coupe GT historic touring car was in fine form over the weekend, driven by H.J.Pfaff Audi’s Shop Foreman Perry Mason. Starting off with the annual tech inspection, the car was cleared for another season of racing by CASC. First up was Saturday morning Qualifying, which Mason grabbed class pole by .200 of a second. A complete check over of the car by Perry and Pfaff Master Audi technician Darryl Hopp was done afterward and they were ready to go for round one. 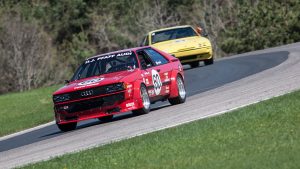 The 20 minute battle between The Audi and a Porsche ended up with the first class win for Perry and a second overall in the race. Race two was on Sunday morning Mother’s Day.  Mason started in overall Pole position due to a DNS of the first race overall winner. The green flag fell, and Perry took off to an overall lead for over half the race until the faster upper class F cars worked their way up and edged Mason out leaving Perry in 4th overall but once again with the class win. So with fuel topped off and final checks done, it was now the final in the afternoon. Having to start on the outside in the tight knit group, Perry got off to a bit of a poor start being blocked and loosing four spots by turn three. With some smooth driving, and out braking other cars,  the Audi made its way back to the top of the class taking home first place and the BEMC Spring Trophy for classic division. “I was so happy” Perry stated, “Earning the Spring Trophy for me is one of my bucket list achievements” he said enthusiastically “I was proud to have the Pfaff name on the car as well, and the support from Newmarket Audi and Pfaff Autoworks. A big thanks goes out to colleagues Darryl Hopp and Mark Harris for the help at the track as well. Next event is the VARAC Vintage Canadian Grand Prix June 14-17 at CTMP. 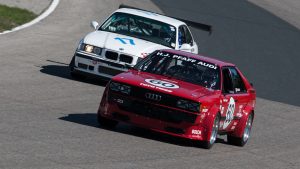 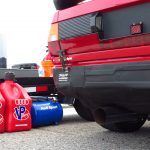 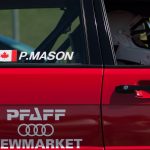 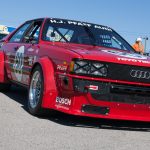 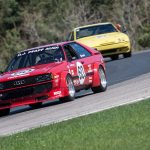 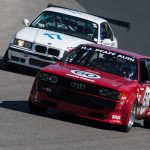 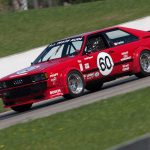 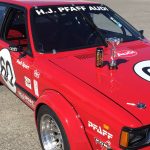