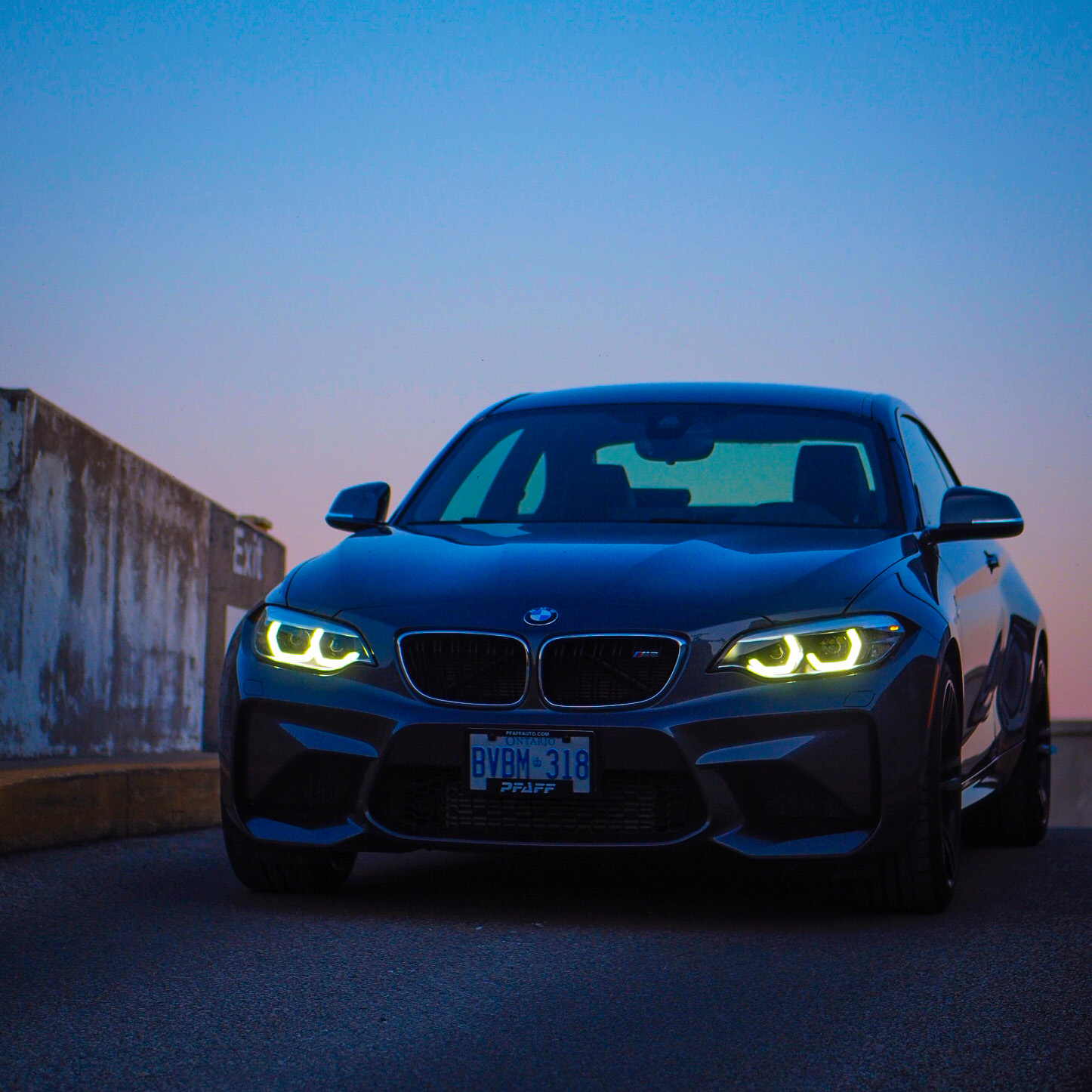 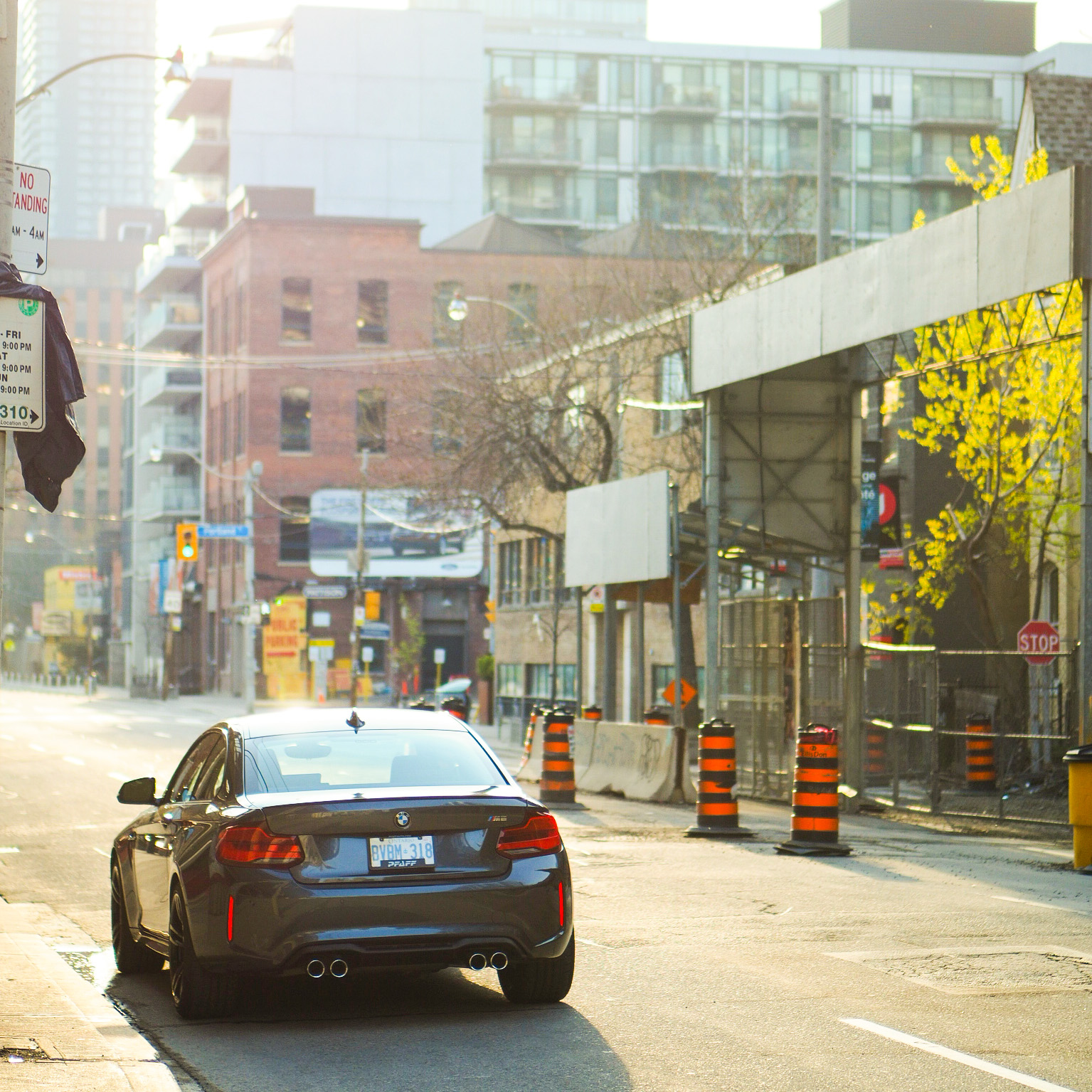 For a city-dweller, its size and packaging are just about perfect: the spacious, practical cabin perched on a small footprint, the upright greenhouse, and great visibility make driving around town stress-free, while its perfectly-balanced weight distribution, rear-drive chassis, powerful brakes, and great steering make it a fantastic steer out of town. Throw in a surprisingly compliant ride, impressive fuel economy, and decent refinement and you have an almost perfect small coupe. 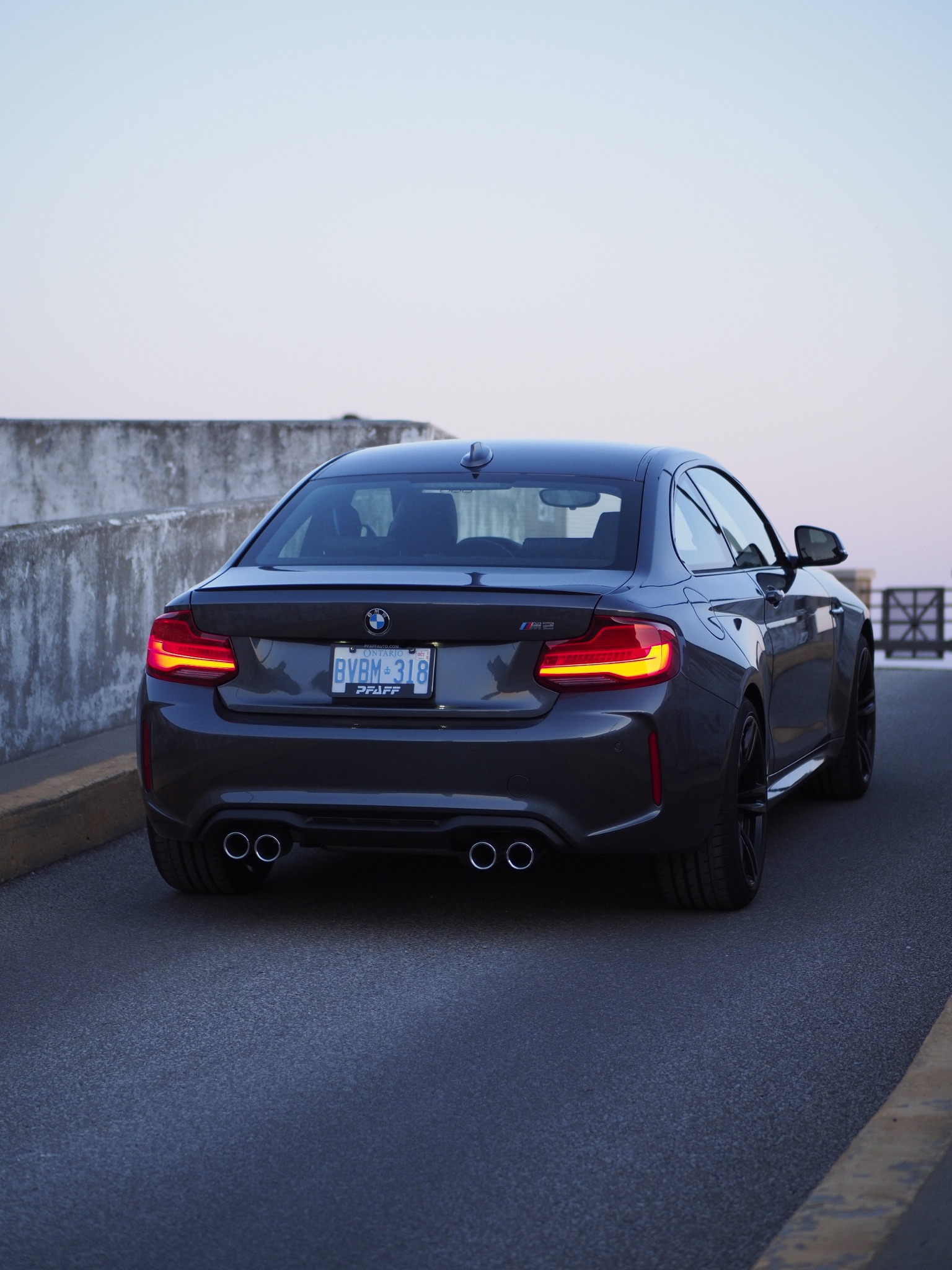 Having driven the more-powerful, more-aggressive M2 on track and fallen in love with it, the desire was always there to have the ultimate 2 Series. Deciding to put my money where my mouth is, I took delivery of one this April, curious not just about how much of its performance I would be able to access on a regular basis, but also about what it would be like to live with daily. 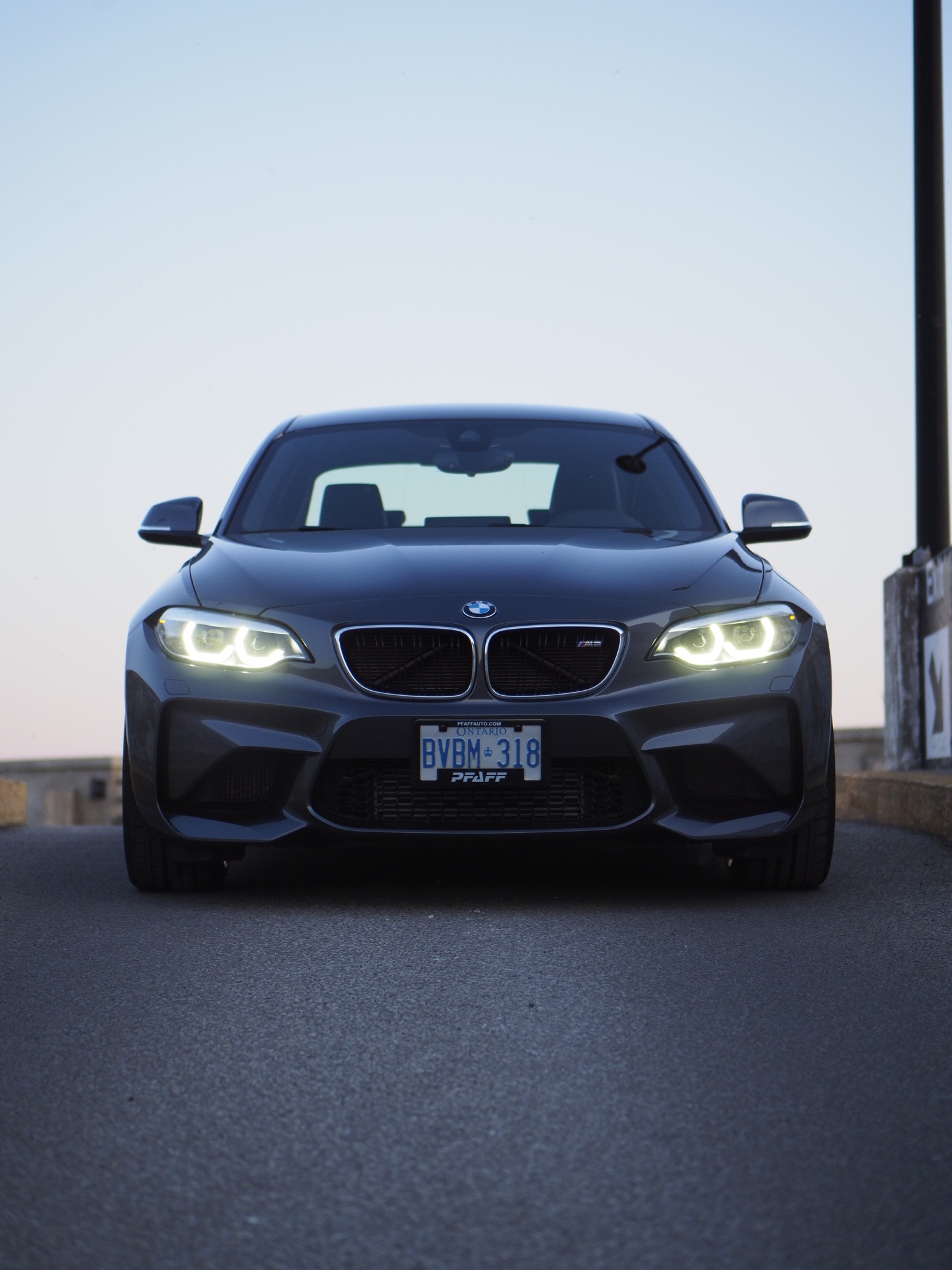 The truth is that, as an everyday car, the M2 is, in almost every way, objectively worse than an M240i, or even a four-cylinder 230i. But all of the things that make it worse are also what make it way, way better. 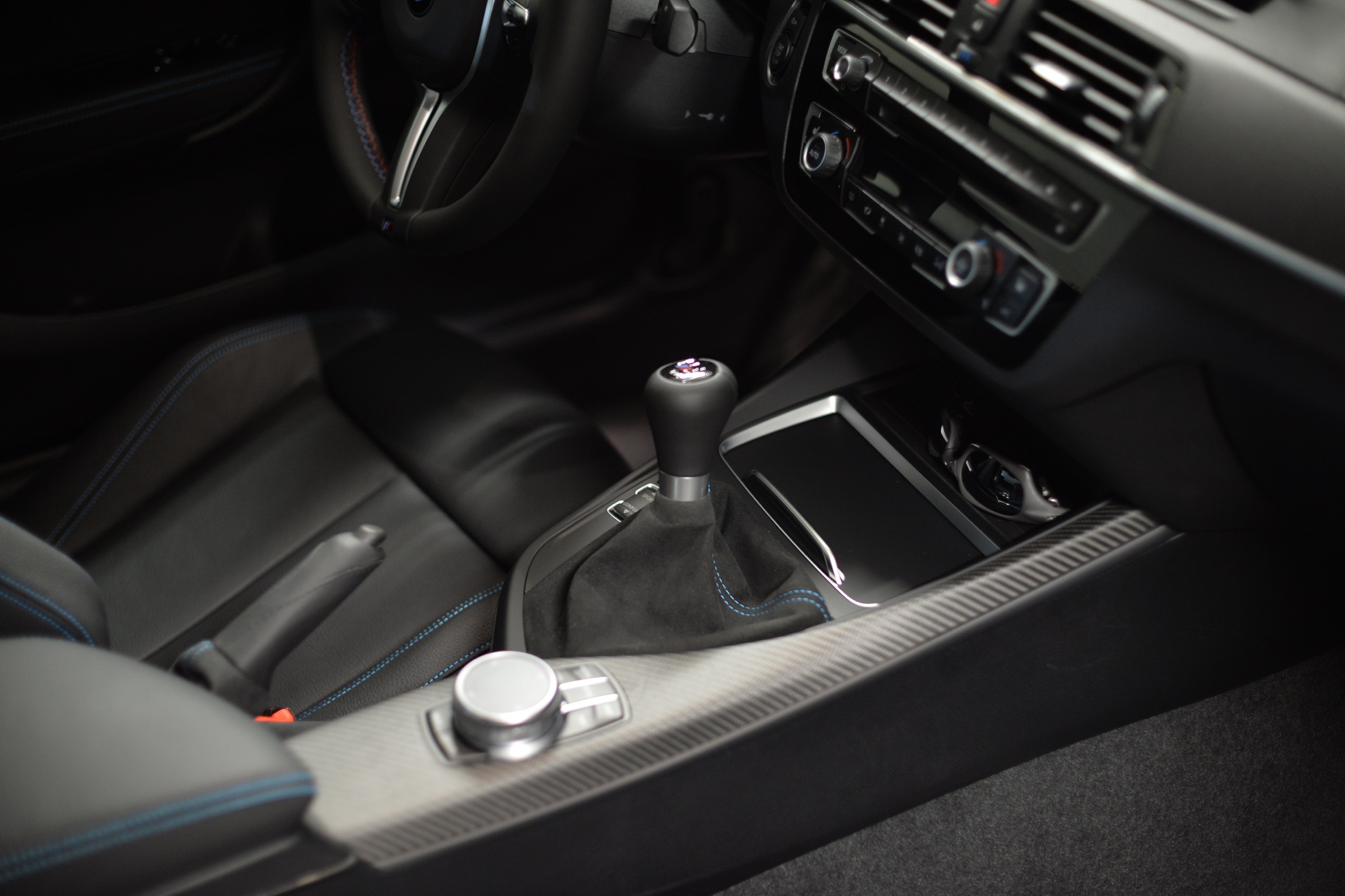 Case in point is the engine. The M2’s single-turbo inline-six may produce 365 hp, up about 25 hp from the M240i, but it actually produces less torque, and it produces that torque significantly higher up the rev range. Objectively, that means that it has noticeable turbo lag and a narrower power band. This means you can’t just surf along on a fat wave of torque and tune out, but have to work the six-speed gearbox frequently to keep the engine on the boil. 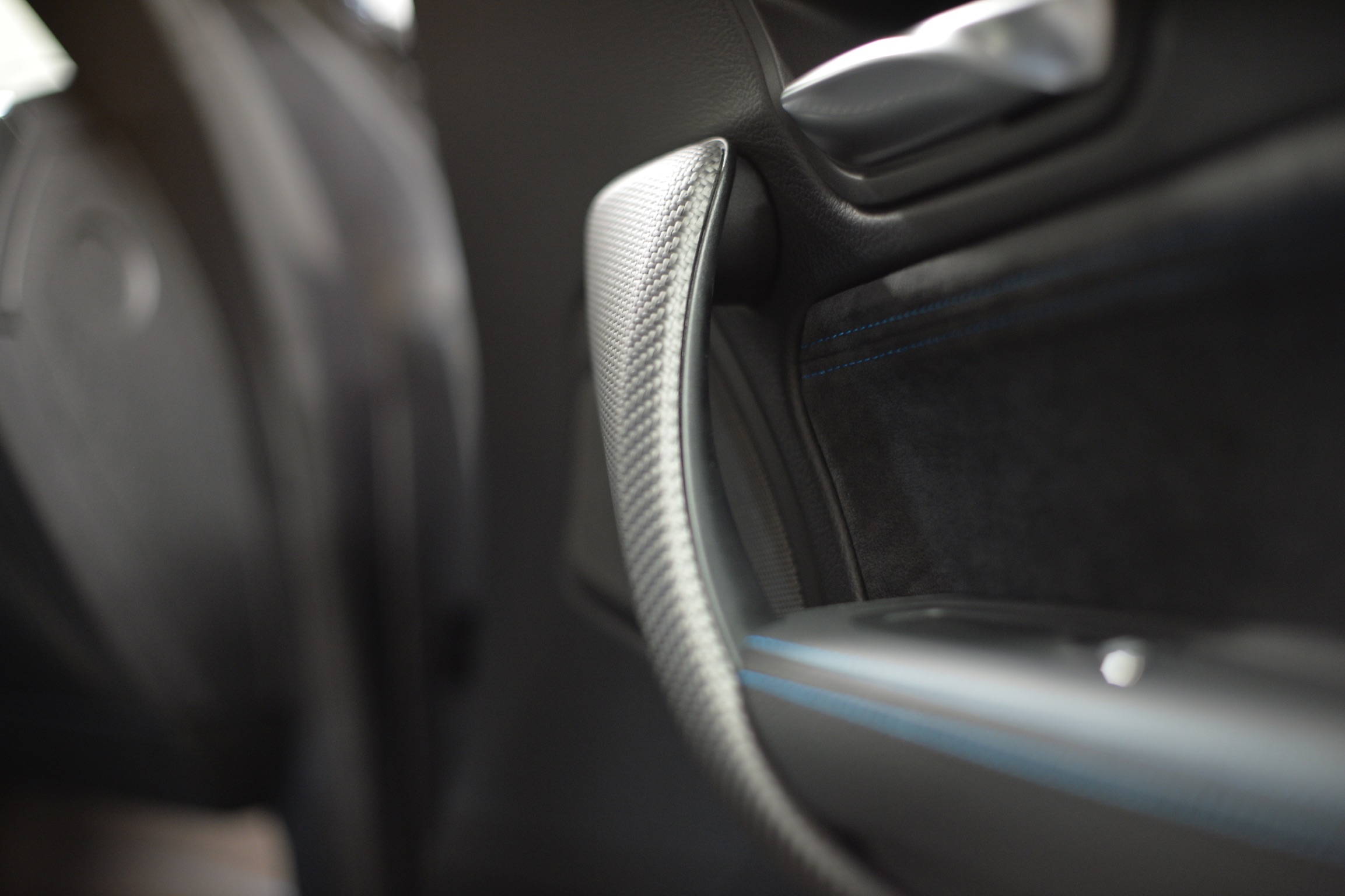 Subjectively, though, that means the M2 is far more involving to drive – the gearbox has tight, short shifts, and the aggressively turbocharged nature of the engine gives it a level of excitement and aggression that the more-refined M240 lacks. Once the boost starts to come on, it revs like crazy, and even delivers the signature rasp familiar to drivers of older, naturally-aspirated M cars. Drive the M2 like it wants to be driven, and it’s a thrilling, exciting thing, though fuel economy suffers, exacerbated by the tiny fuel tank. Average consumption over my first thousand kilometres settled down from an atrocious 16 L/100 km to about 12/L 100 km – not bad given the power output, really, but the 45-litre tank makes for frequent fuel stops. 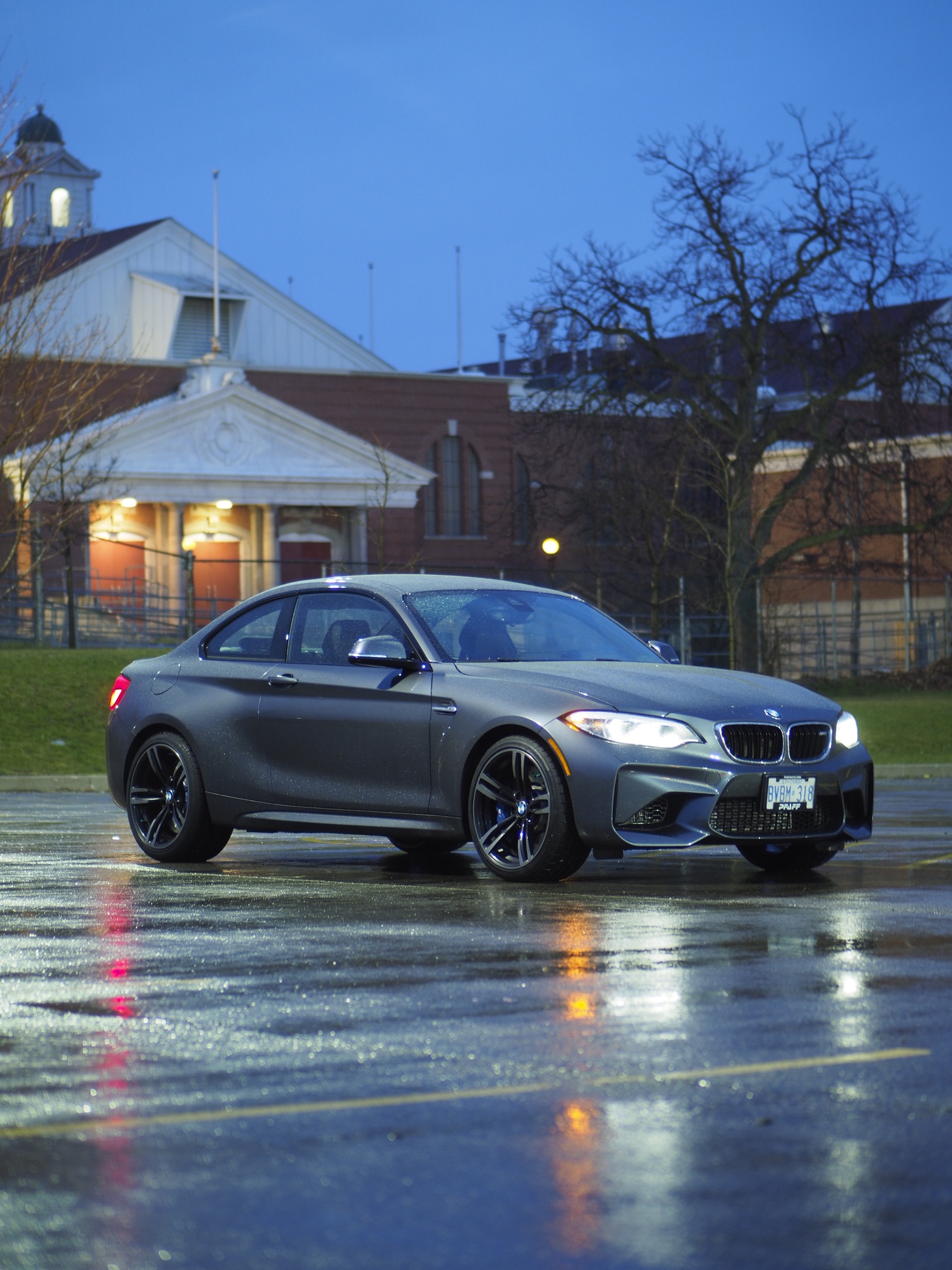 The M2’s suspension setup, so brilliantly balanced on the track (more responsive, yet also more friendly than the bigger M3 or M4) gives it an edge on the street that is a bit of a double-edged sword. On the one hand, the ride is uncompromisingly stiff on city streets, keeping the body under tight control, and that, allied with the wider 19” wheel and tire setup, means the M2 also tramlines on poor pavement, requiring a pretty firm hand to guide it down a rutted highway. On the other hand, the light, easy steering of the M240 has weighted up nicely, cornering grip has significantly improved, and your confidence when driving quickly is exponentially higher. There’s enough power, too, to be able to twerk the chassis about with the throttle, especially with the help of the trick M differential. 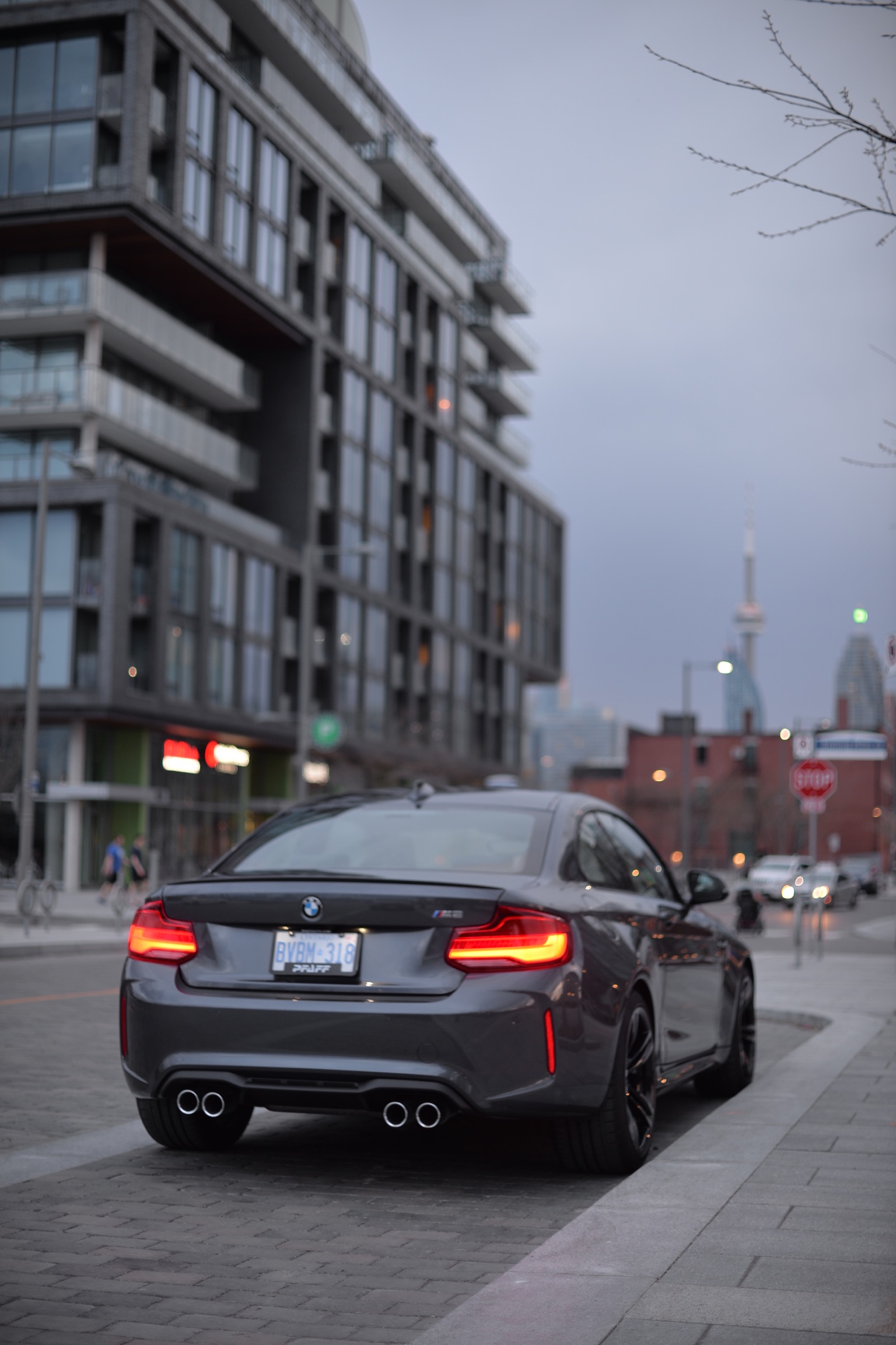 The stiff ride, the chuntering diff, the loud four-exit exhaust (loud enough that you should think long and hard about whether you really need the M Performance exhaust option except for the track) and the aggressive tire setup mean make for a busier, noisier cabin, one where you can’t really relax and listen to a podcast anymore. But it’s all more than made up for with the tasty little alcantara touches on the doors, shift boot, and handbrake lever, the contrasting stitching that Porsche would charge you thousands for, and the noise and drama you get with the windows down, the drivetrain in sport mode, and the music cranked. 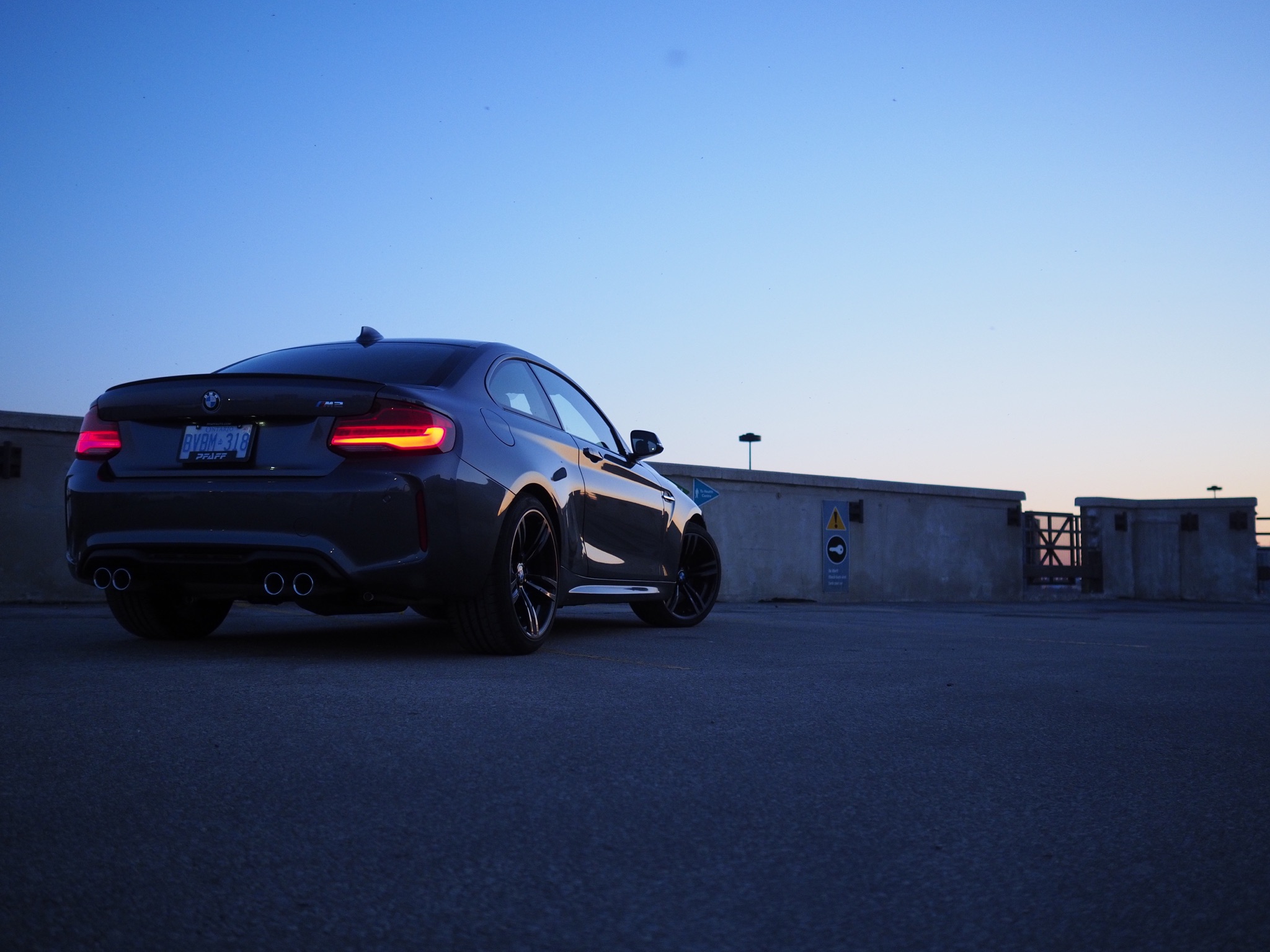 Starting at just $65,200, with only a handful of options available, the M2 is a flat-out wonderful car, even if, away from the track, it is a more compromised ride than its narrower, tamer-looking, less-aggressive brothers. Everything that makes it worse also makes it better, and its bulldog stance, snarling engine, and the way it dances over the pavement make even the most mundane drives feel like something special. The only thing you wonder about now is just how much better the recently-announced M2 competition is going to be… 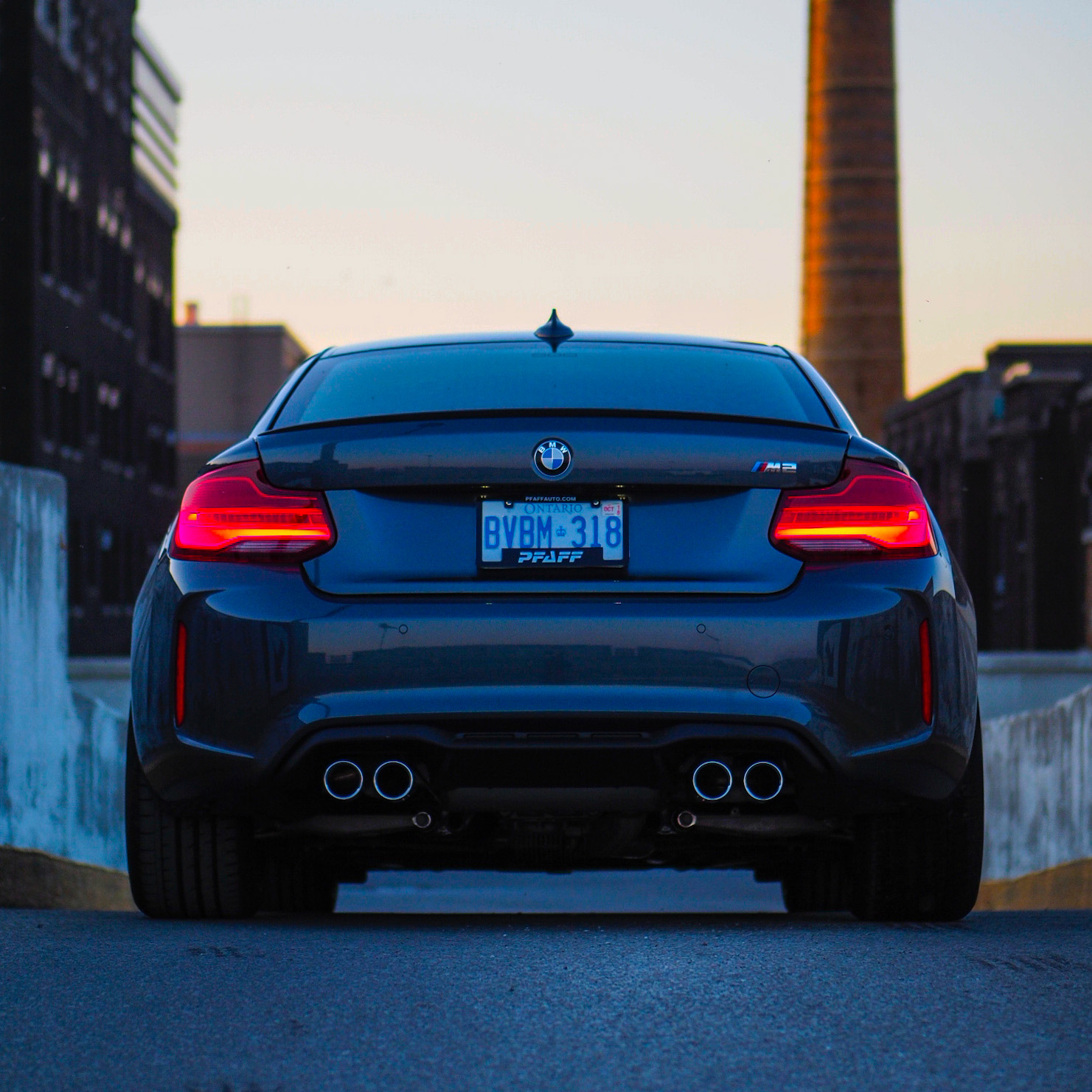