Trois-Rivières, QC (August 13, 2017) – The 48th running, and 50th anniversary of the Grand Prix de Trois-Rivières was initially hampered by rain, but that didn’t stop the sun and crowds from coming out to support a Porsche GT3 Cup Challenge weekend that was filled with ups, and a few downs for Pfaff Motorsports.

Overall championship leader Scott Hargrove (Platinum class) came into the penultimate weekend 17 points ahead of Zach Robichon, and was flanked by teammates Orey Fidani (Gold), Shaun McKaigue (Masters) and Pieter Baljet (Masters) in a four-car effort that was hoping to extend its championship lead with just four races remaining.

Preluding to the weekend’s battles, Hargrove narrowly edged out Robichon on the timing sheets of practice one by 0.028 seconds, but would carry that and the fastest lap time into practice two.

Unfortunately, Pfaff’s fortunes were not all positive on Friday, as Fidani stepped on the throttle out of turn one only to hear a quick “pop,” resulting in a blown engine that would put him out of the weekend’s contention.

Saturday’s qualifying was hampered by a looming storm that only saw just three-quarters of the field put in minimal laps before it was cancelled due to standing water and wet weather conditions. As a result, the race starting order was based on points and Hargrove would lead the pack, with McKaigue and Baljet starting third and fifth in-class, respectively.

Hargrove had a quick jump on the green flag, but was being checked closely by Robichon, with third and fourth place looming in his mirrors. As the race settled, the two drivers separated themselves from the pack, with Hargrove protecting his lead with great straight line speed and precision through the corners. At the end of 42 laps, Hargrove crossed the line nearly six seconds ahead of second place, and claimed the fastest lap and top speed. McKaigue had only managed five laps before an incident with curbing saw him break a wheel and retire.

Baljet meanwhile, claimed his first podium of the season, finishing third in the Masters class and seventh overall. His performance was worthy of the overall “Hard Charger” award for top performance of the race in his Vancouver Island Circuit/Porsche Centre Victoria 911 GT3 Cup car.

For race two, Hargrove led the pack again, though his race was not nearly as comfortable as the first, with him and Robichon running away from the field once again to fight their own battle. Putting in a fastest lap just 0.02-seconds ahead of his closest competition, Hargrove couldn’t make a mistake as he carved his Castrol 911 GT3 Cup through the street circuit and onto the finish, where he crossed the line 1.9 seconds ahead of Robichon.

Baljet continued his quick pace from throughout the weekend and jumped three positions in-class to capture another third-place, while McKaigue finished fourth and captured some important points in the championship race, where he sits in third.

“It’s been a fantastic weekend here,” Hargrove said. “I have a bit of experience at the track from the previous three years, but with the combined knowledge of the team, we were as good as ever – as always here. The races were really tough this weekend. Zach [Robichon] was really fast, but the team put my Pfaff/Castrol car on rails. It was great to have something so responsive to fight for these wins in front of such an awesome crowd.”

“First of all, I have to say, I wish the rest of the world was as enthusiastic about racing as Quebec,” Baljet added. “Great fans, it’s been a great place to race this weekend. As far as the track goes, I’ve never raced here before. It’s challenging, it rewards consistency and punishes drivers who go too far. So we tried to stay within those bounds, and we ended up with a couple pretty good days! So thank you to the entire Pfaff team for working to put together such a great car for this weekend.”

With just one round and two races remaining, Pfaff Motorsports will be looking to lock down the overall championship with Scott Hargrove, who is aiming to repeat on his 2014 success, while McKaigue and Baljet are in contention for top-three finishes in the Masters standings. It will all take part at Canadian racing’s crown jewel, Canadian Tire Motorsport Park, when the Porsche GT3 Cup Challenge Canada series visits from September 1 to 3, 2017. 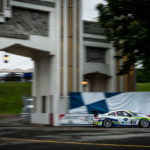 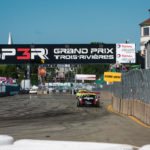 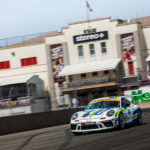 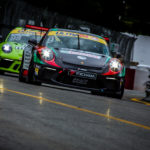 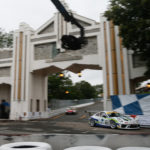 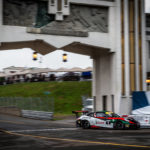 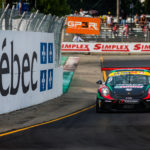