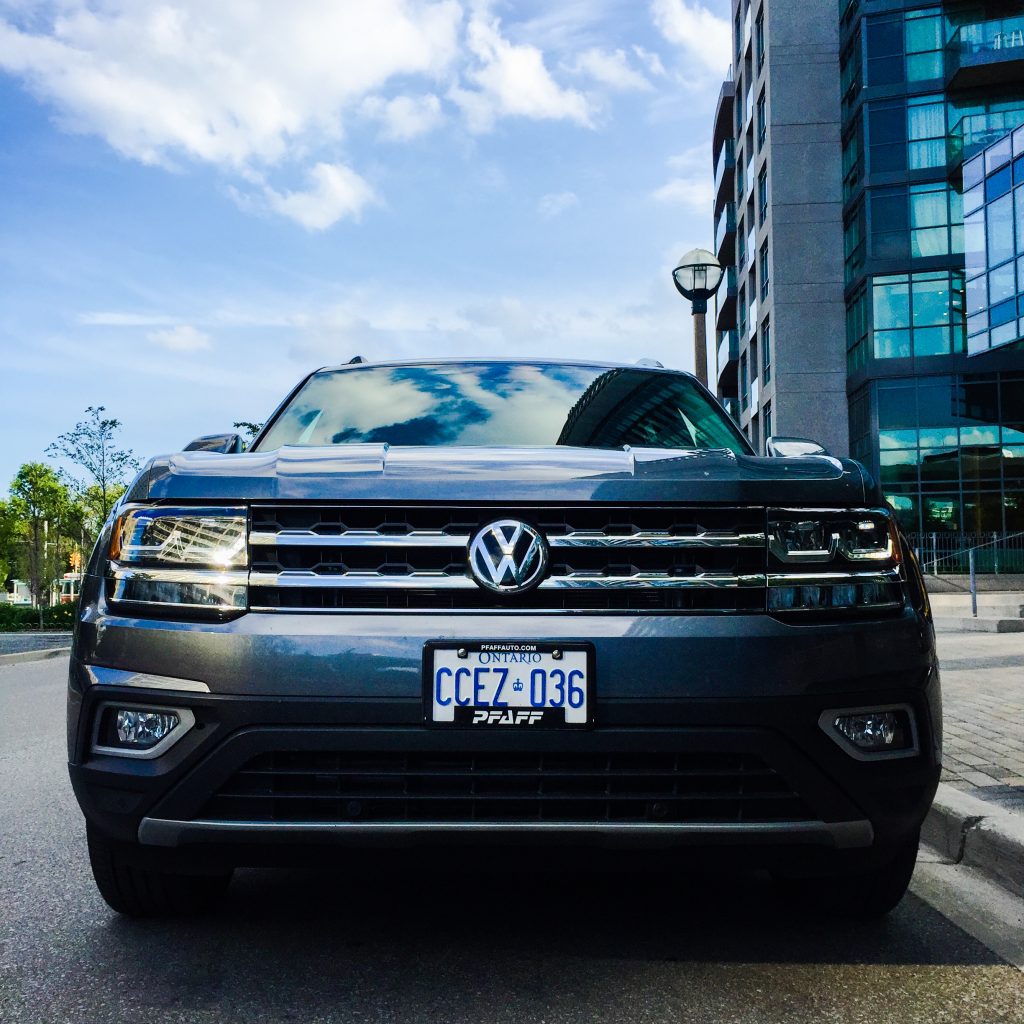 The all-new Atlas, which we’ve just started delivering at Pfaff Volkswagen, isn’t like any Volkswagen you’ve seen before. A large SUV with three rows of adult-size space and a huge cargo area, Atlas is the biggest VW ever offered in Canada. It looks different, as well, ushering in a sharper, edgier design language inside and out. But while the Atlas’ size and form factor may take a bit of getting used to, they way it drives, and the way it feels, won’t – which is good news for Volkswagen fans that have been longing for something bigger to match their growing families.

Born of intense research into the North American market, Atlas isn’t a direct replacement for the more-expensive, more premium Touareg. Instead, it competes against vehicles like the Honda Pilot, Toyota Highlander, Ford Explorer, and other large, mainstream SUVs, with a starting price of under $36,000, rising to just over $50,000 fully loaded. Power comes from VW’s proven and torquey 2.0-litre four-cylinder, or a smooth, naturally-aspirated 3.6-litre V6 coupled to available 4Motion all-wheel drive. 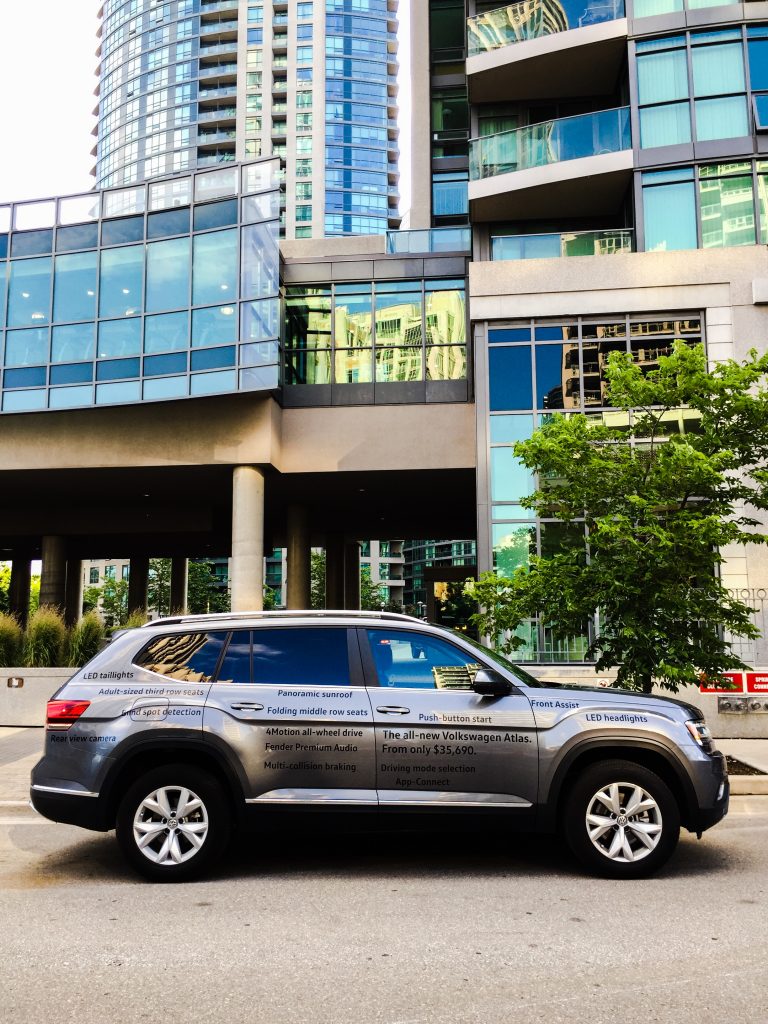 The V6, which was fitted to the car I test-drove, produces a smooth, quiet 276 horsepower, delivered to all four wheels via an eight-speed automatic transmission that, in normal driving, shifts imperceptibly. Sport and manual modes are available that deliver crisper shifts, but the gearbox is so perceptive that you rarely need either. I’ve yet to try the four-cylinder drivetrain, but on paper, the six, which is available with all-wheel drive at a starting price of just over $41,000, would seem to be the engine of choice, better matched to the vehicle’s size and demeanour.
Atlas is based on VW’s modular “MQB” component set, which underpins most of the group’s recent models worldwide. The brilliant thing about this platform is that it allows variations in wheelbase and width, accommodating a wide range of vehicle sizes, while retaining key (and expensive) shared components across models. These shared components, and the economies of scale they bring, have allowed Volkswagen to include high-end features in MQB models that are normally the preserve of much more expensive vehicles. 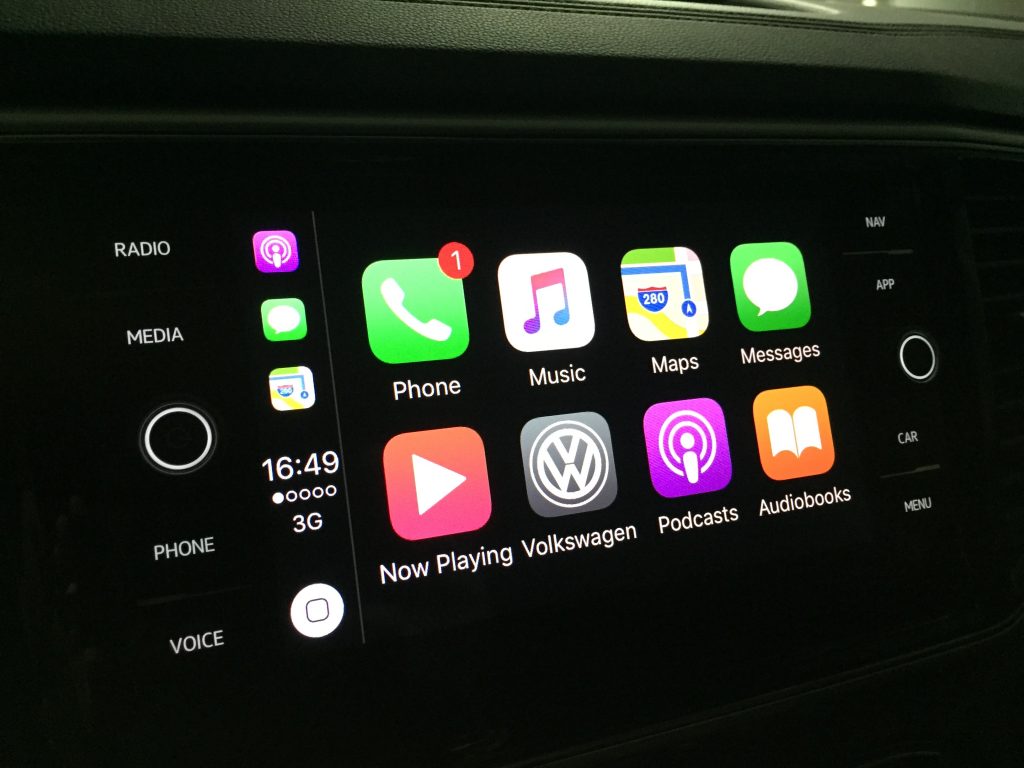 The Atlas is simply loaded with friendly technology. On the infotainment front, VW’s latest App-Connect system gives you a massive touchscreen with Apple CarPlay and Android Auto, to work as a gateway to your smartphone’s interface, and all of your music and phone contacts. Available active safety systems include high-end features like adaptive radar-based cruise control, lane departure warning, blind spot monitoring, and more. And luxury-car goodies include available ventilated seats, heated steering wheel, and a massive panoramic sunroof. 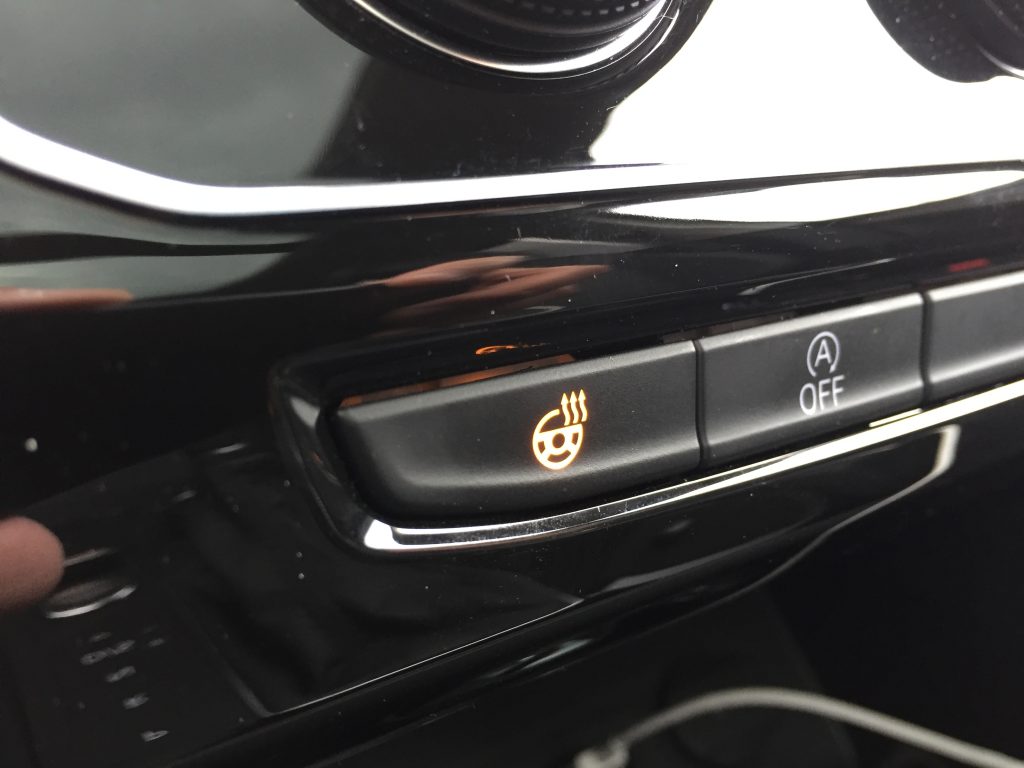 All of these features serve what is easily the largest, most versatile Volkswagen passenger compartment I’ve yet seen. You step up a bit into a huge cabin, with expansive and comfortable front seats with a great view out. The second-row seats slide and tilt (and get their own set of vents, seat heaters, and manual sunshades). But the big surprise is the third row, which isn’t just suitable for children, but is actually adult-size, with plenty of leg- and headroom, big windows so it doesn’t feel claustrophobic, and even coverage from the big glass roof. Put all of the seats up and you still leave enough room in the cargo area for a decent amount of luggage, something very few mainstream SUVs with seven seats offer – you’re normally forced into a compromise between people and their stuff. 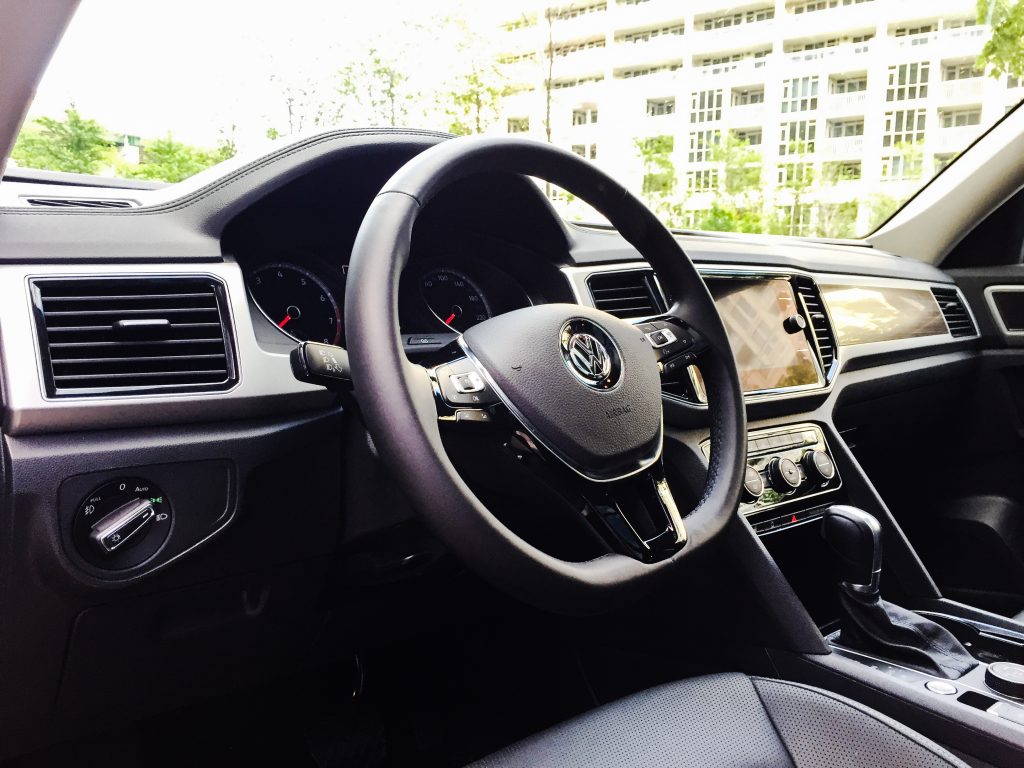 Living in downtown Toronto, and having to park in a tiny underground parking spot, I was afraid that the Atlas would feel unwieldy on city streets, but surprisingly, the Atlas was as nimble and as confident to drive as any other Volkswagen. The ride quality on rutted, potholed urban tarmac is excellent, and the steering is light and easy while still delivering lots of road feel. The Atlas’ upright greenhouse and square corners mean placing it precisely is quite easy, and the turning circle is surprisingly tight. The responsive V6 and quick-shifting transmission also make it easy to keep up with the cut-and-thrust of urban traffic. 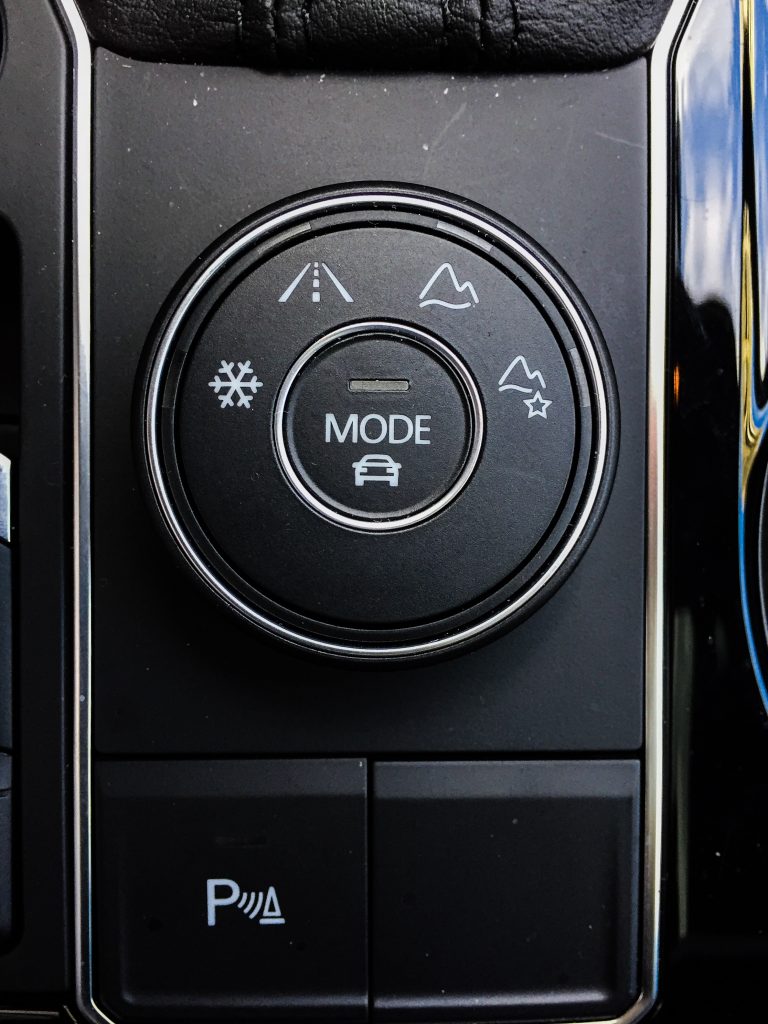 On the highway and on longer journeys, the Atlas really comes into its element. It’s refined and comfortable when cruising, and once you’re off the beaten path, you can twist the drive mode knob into sport, where it reveals its Volkswagen roots with responsive handling, strong brakes, and a fun-to-drive nature that you wouldn’t expect in a vehicle this big. Despite all of that, fuel economy remains impressive for something so large.
In so many ways, the Atlas is Volkswagen’s biggest launch in years – biggest because of how big it is, of course, but also biggest because of how important this vehicle is to Volkswagen’s success. The seven-seat SUV segment is intensely competitive in North America – but Volkswagen’s done its homework, and has a vehicle that measures up to, and bests, its competition in features, performance, and overall feel. It may not be like any VW you’ve ever seen before, but the good news is that it’s just as good, and just as engaging. 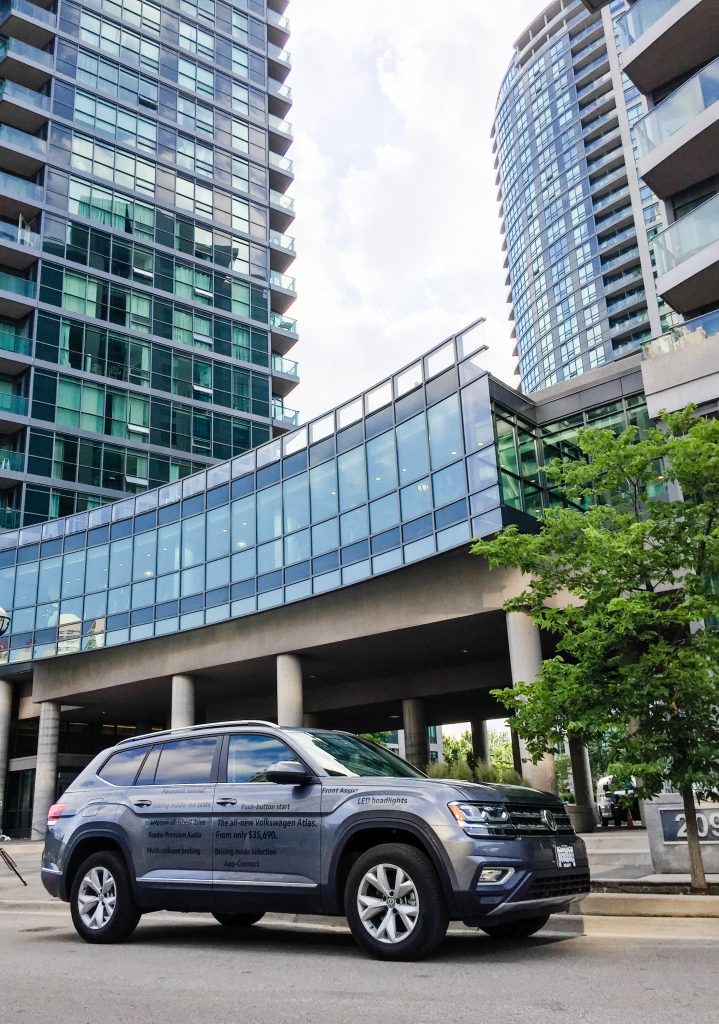