The season opener for Ontario Regional Road Racing took place this past May 13-14 2017 at Canadian Tire Motorsport Park north of Bowmanville, Ontario. Hosted by the British Empire Motor Club, the Spring Trophy Races are in their 67th year. The H.J.Pfaff Audi Newmarket Historic Race Team with Perry Mason and his 1981 Audi 80 GT were once again in fine form in Varac’s Classic G class. Featuring cars such as Datsun, Porsche, BMW, Mustang and Corvette, Perry and the lone Audi was able to score two class wins and a second place in the final to start the season off with the G class point lead heading into June’s Varac Historic Grand Prix. The weekend started off with the annual CASC tech inspection a trouble free practice session. It was a slightly damp qualifying session on Saturday and Perry grabbed class pole position without a problem. Race one that afternoon after a deluge of a rainstorm resulted in a win securing a class front starting position for race two Sunday morning. 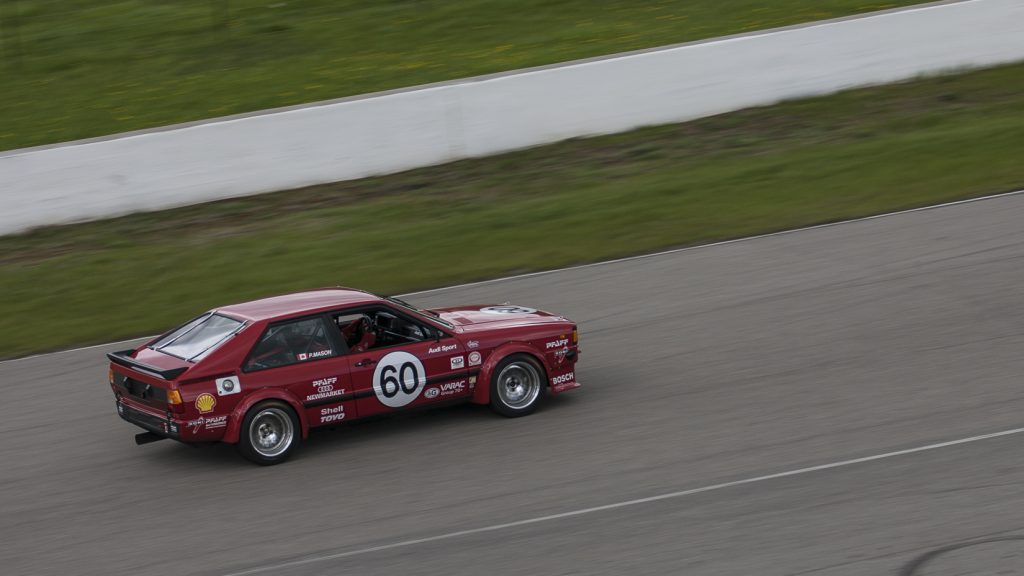 Sunday’s race two before noon was smooth sailing to another victory for Perry and the Audi 80. “The car felt great, was quick and reliable” Perry said after the finish of race two. “It’s amazing how much fun it is to drive a 36 year old car in these races , a testament to the quality of Audi products and the type of preparation that Pfaff technicians provide” Darryl Hopp, Master Tech at Pfaff Audi Newmarket was there to assist with the pre race and post race checks and adjustments over the weekend. After the lunch break, high winds and heavy hail hit CTMP with a vengeance, turning the facility to ice, knocking down canopies and sending teams and spectators to take cover. After about a hour of this spring weather excitement, the races finally resumed and Perry drove to a second place in the final. “Second place was a tough pill to swallow, but we went faster than our allowed G class time by a half second causing us to be penalized a lap. But due to breakouts as well by the competition we salvaged the second spot” Historic racing is classed by time brackets of which need to be adhered to or you face a chance of lap penalties or bumping to the next class. On to the next race June 16-18 at Canadian Tire Motorsport Park, for the 50th Anniversary of F1 in Canada hosted by Varac. Should be a great event.

Thanks goes out to H.J.Pfaff Audi Newmarket and Pfaff Autoworks for their support. Photos by Mark Harris.