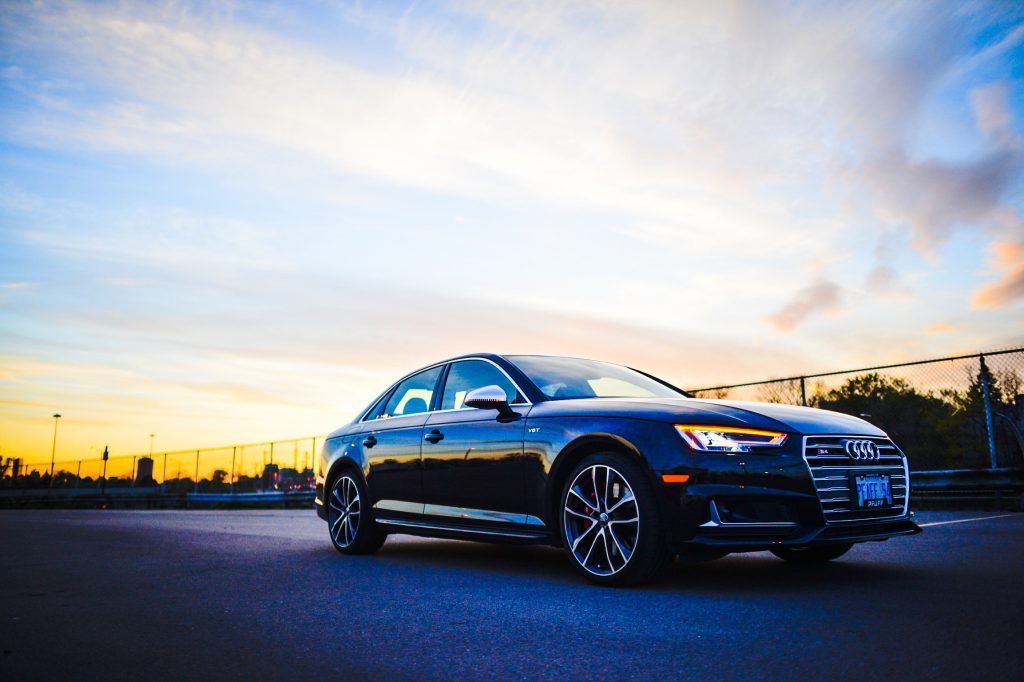 It’s kind of a deceptive car, the Audi S4. At a glance, it doesn’t look much more than a new-generation A4 on some big wheels and with the S Line sport package applied: bigger intakes and brushed-aluminum trim up front, a more aggressive diffuser, super-sharp LED headlights and a planted stance. It takes a second look to notice the bigger differences: massive, red-painted brake calipers peeking out from behind the 19-inch wheels; four fat exhaust pipes exiting the rear bumper instead of two; and a pair of brushed-aluminum mirrors that indicate this Audi is something a lot more special. 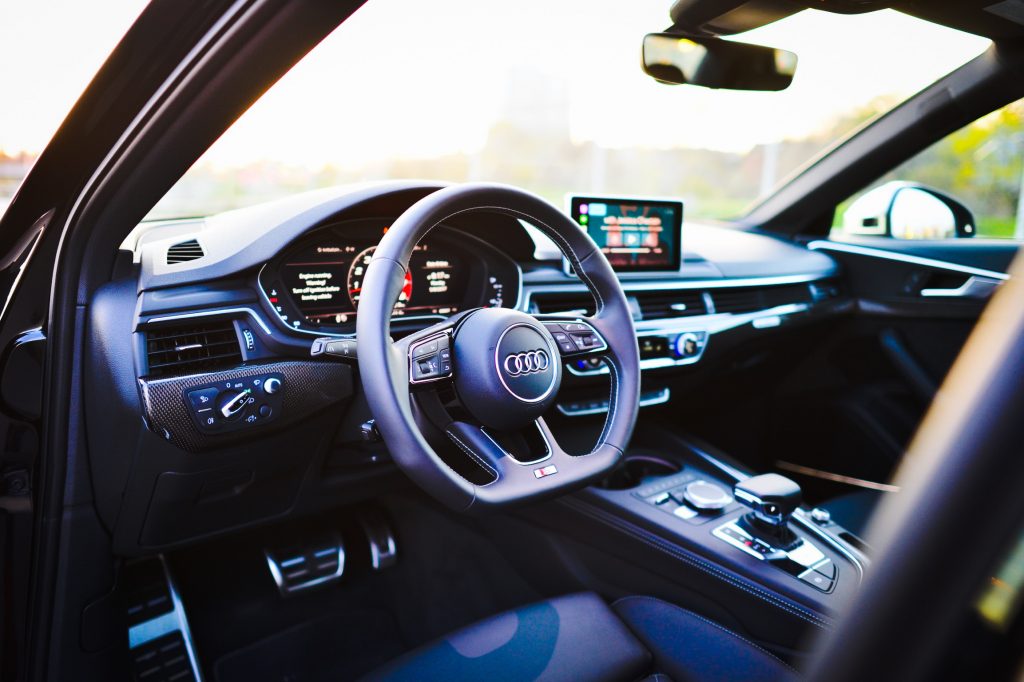 With 354 hp on tap from its turbocharged (no longer supercharged) 3.0-litre V6, the new S4 packed an extra 100 horses over the A4, and its gearbox, an eight-speed automatic, has one extra ratio compared to the standard car’s S-tronic DSG. Fire it up, and, subtle cosmetics or not, you know it’s something special: there’s a fruity bark from the exhaust that, if you set the Audi drive select to dynamic mode (or tweak the individual setting to open the baffles in the mufflers), is a contestant reminder of the potential under your right foot. 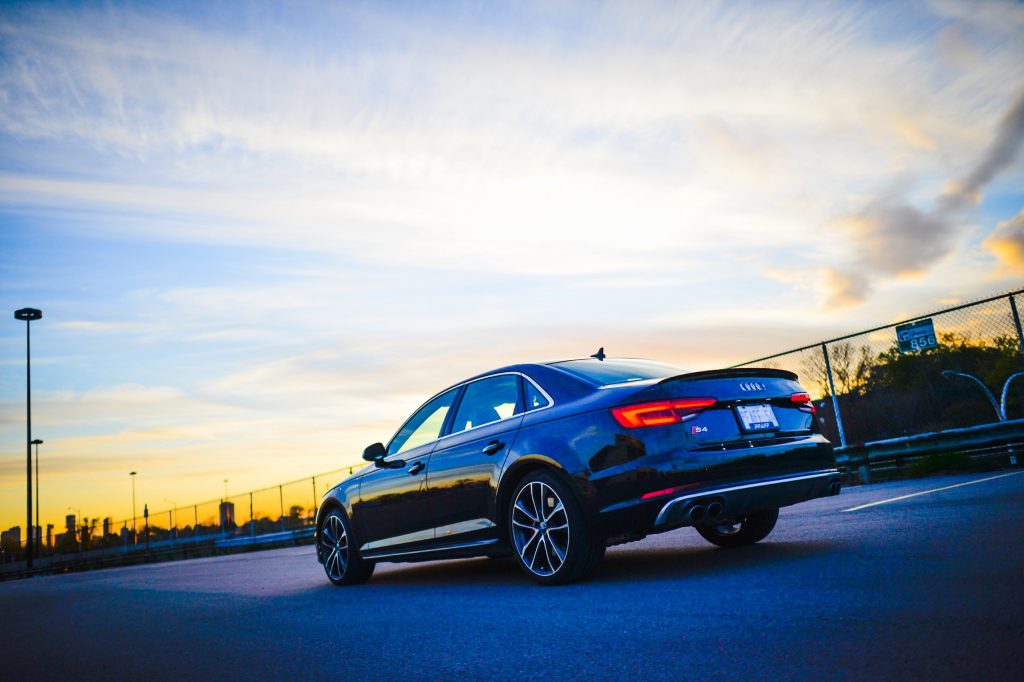 Make no mistake, this is a very fast car. Floor the throttle from a standstill and all four tires hook up instantly, while there’s only a hint of lag before boost from the turbocharger kicks in to whip the car off the line. The eight-speed cracks off instant, seamless upshifts that feel just like a great dual-clutch box. The engine loves to rev, too; unlike a lot of turbocharged powerplants I’ve experienced, it keeps pulling hard to its redline, and it sounds terrific. 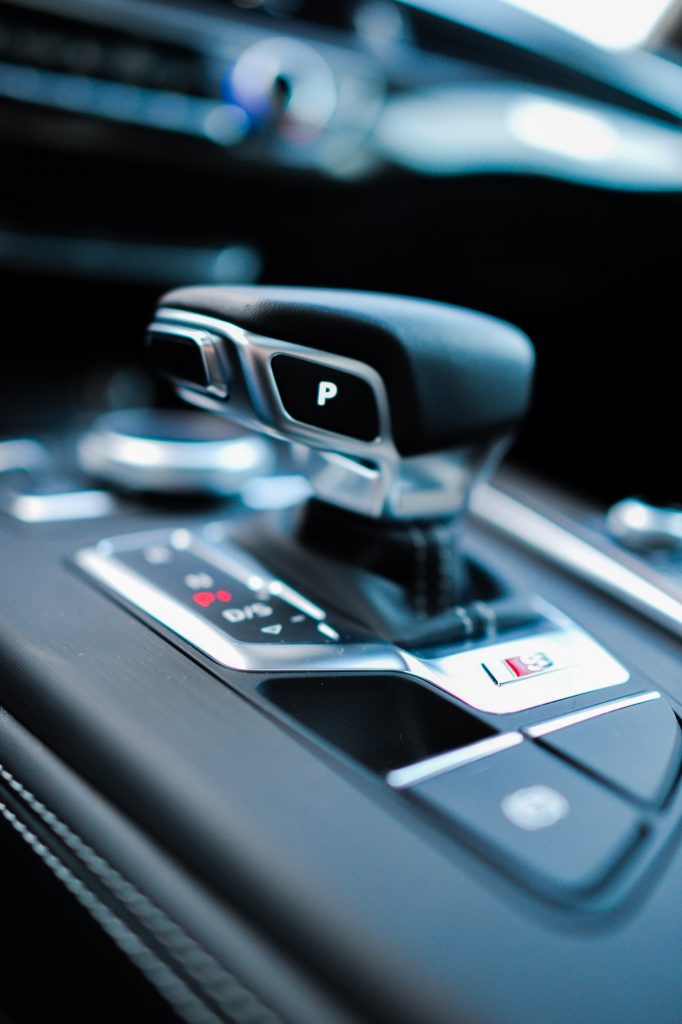 Audi’s not just added speed to the A4, but also feel. The brake pedal has none of the initial softness of most Audis, delivering instant, and perfectly-modulated, stopping power. The steering whips the nose into bends instantly, aided by the electronically-controlled sport differential, which kills initial understeer, before the car settles into a confident, stable stance around any curve. Mid-range throttle response is instantaneous, electric, and easy to control precisely. 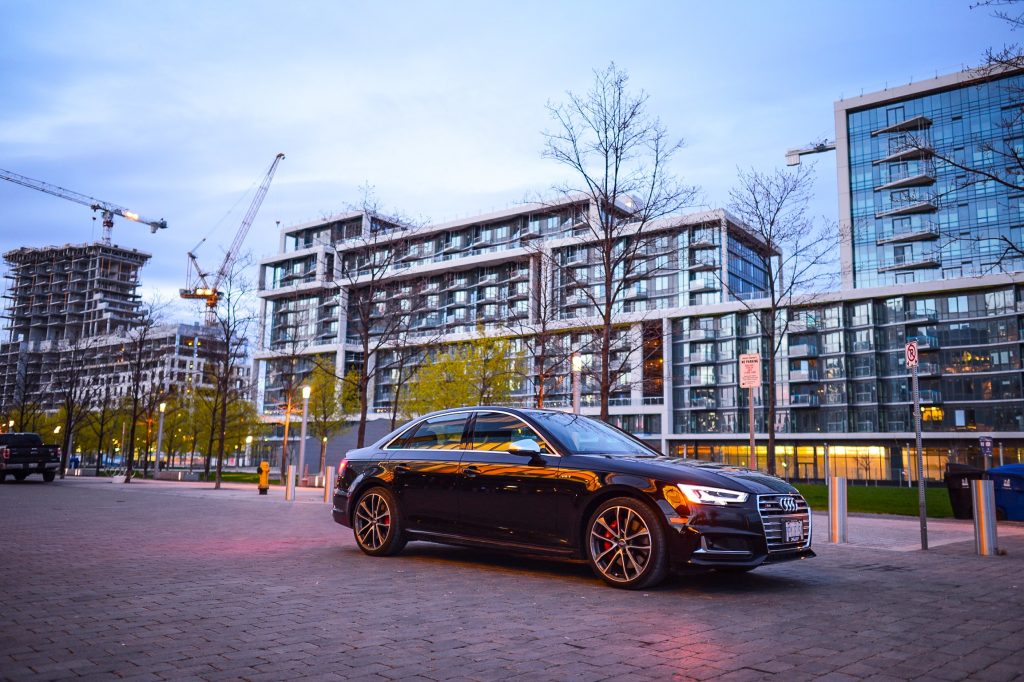 You would expect that kind of performance from something wearing the red rhombus and an “S” badge. What’s perhaps even more impressive about the S4 is how comfortable it can become when you’re not in the mood, thanks to a multitude of available setup options. Dial it into comfort mode and it becomes an effortless cruiser, with a transmission that slurs imperceptibly between gears, a suspension that delivers a glass-smooth ride at high speeds, and the most impressive wind- and road-noise isolation of any car I’ve driven under $100,000. 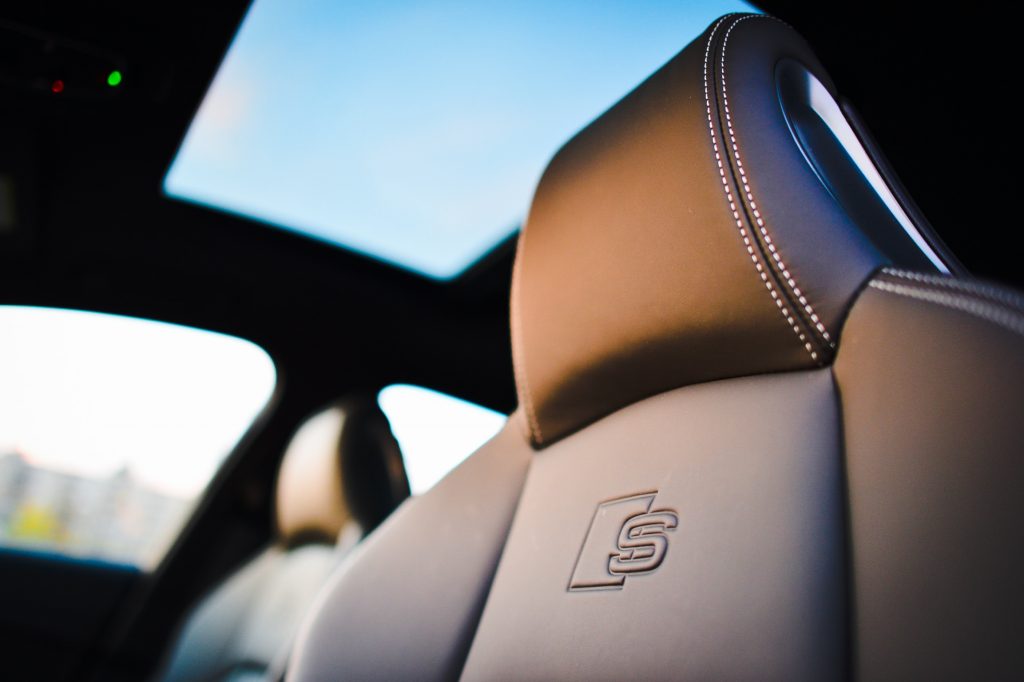 Indeed, one day last week, I whooshed at high speed to London and back with two work colleagues cocooned in its spacious cabin, our backs kneaded by the standard-fit massaging seats, side bolsters backed off to their least aggressive setting, enjoying the car’s silence, speed, composure, and Bang & Olufsen sound system. Our return trip was through persistent, driving rain, and the security provided by quattro all-wheel drive, the stability of its chassis, and the supreme confidence of its controls, meant we had to slow barely at all. 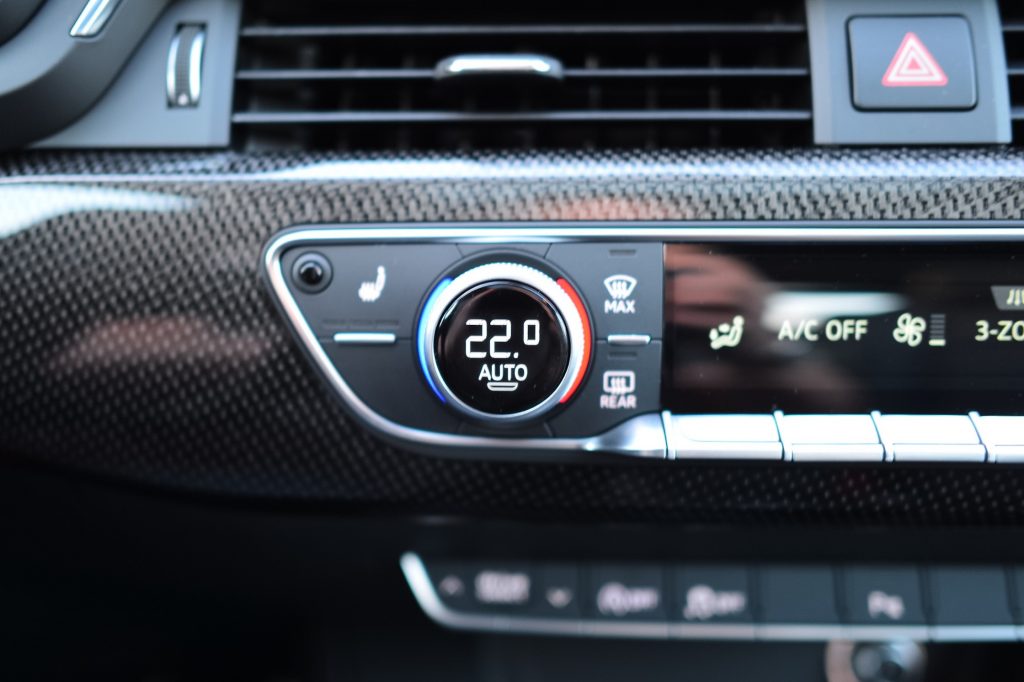 With Audi’s latest MMI system, as well as a “sport” version of the company’s virtual cockpit digital instrument panel, the S4 is also one of the most connected, high-tech cars you can buy right now. MMI, long one of the most intuitive infotainment systems on the market, now gives you a gateway to your smartphone’s functions through Android Auto or Apple CarPlay, which makes accessing your address book, music, and other functions easier than ever. Virtual cockpit lets you choose from a huge variety of instrument cluster setups that are instantly informative and reduce distraction: my favourite included a central rev counter and digital speedometer, with a 3-D navigation map on the left and essential car information on the right. It’s brilliant. 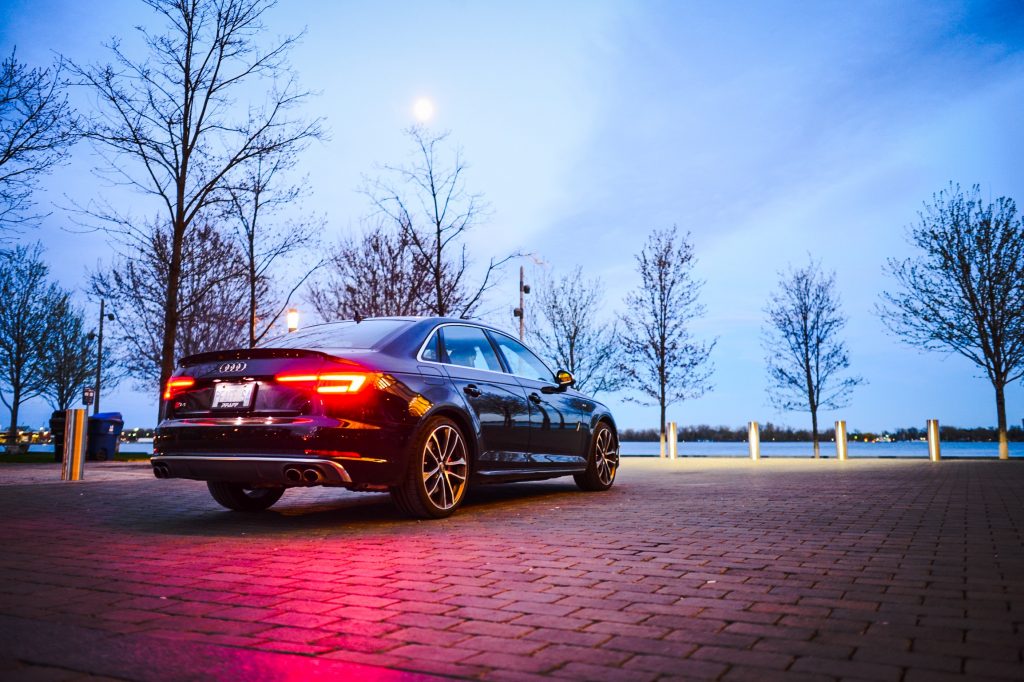 After almost a week behind the wheel, I decided that my preferred setup combined the sportier drivetrain setting – more aggressive throttle response and quicker, more decisive shifts – with the sport differential set to its most aggressive mode, along with the more comfortable suspension setup, lighter steering, and quieter exhaust. A contradictory combination, perhaps, but one that also best expresses the breadth of the S4’s abilities. This new Audi is a great answer to the “one car to do it all” question; if you’re an enthusiastic driver that also needs to move friends, family, or colleagues in comfort, but doesn’t want to sacrifice the selfish pleasures of speed, sportiness, and driver involvement, you could do a lot worse than the new S4.
Find an S4 in our Vaughan or Newmarket inventories.
Previous Post Next Post