The Million KM Corolla – Adventures through the American South

It was 4 o’clock in the morning when we started our journey from north Toronto, with just over 75 000km on the Million km Corolla. Sleepy as we were, we climbed into the car with our travel blankets and pillows, turned on the tunes, and wiped the sleep from our eyes as we traveled down the QEW. Soon enough it was light out and we were in New York, continuing into Pennsylvania where the car flew through the mountains with ease. The large ominous but beautiful land flew past in the reflection of the Corollas rear view mirror.  As we traveled into West Virginia then Virginia, long hours in the car had started to take a toll on us, but the Corolla pressed on. To keep from being bored, it required multiple “Reply All” podcasts, road trip trivia and Google quizzes.  We also wondered about the cars 12 equipped cup holders.  We flipped through our endless music selection, from iPhone to iPad, making full use of the Bluetooth integrated sound system and all connection points. The Corolla even read aloud all incoming text messages! 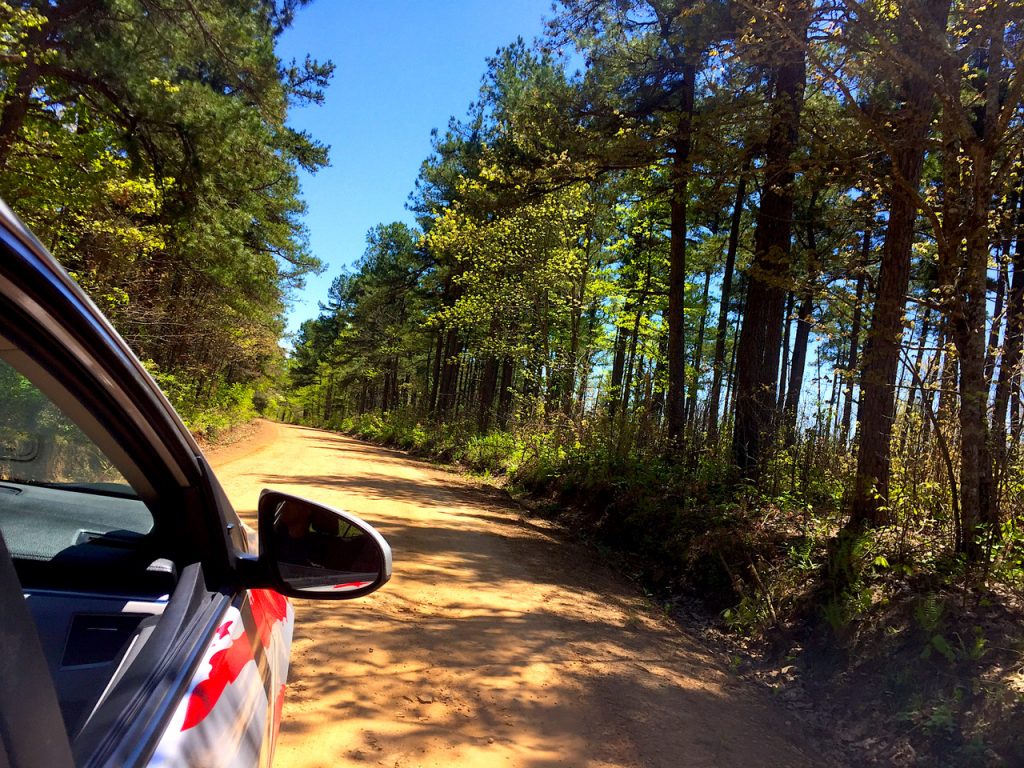 Before long, Tennessee graced us with large mountain views and far off landscapes of The Great Smokey Mountains. It was there, in Gatlinburg, TN, we drove quietly up a steep 6-mile trail to Mount Le Conte to go hiking. We experienced 1160 m elevations, breathtaking views and carnage of a once treed landscape which was burned in a mass fire 5 months earlier. The next day the Corolla fired up and took us to Nashville where inquisitive fellow site seers asked on several occasions about the car and its showy million-kilometer challenge markings. We proudly answered with trust in the cars reliability and performance. After touring the bustling city, we then continued the journey to the ultimate goal of the road trip: Arkansas. 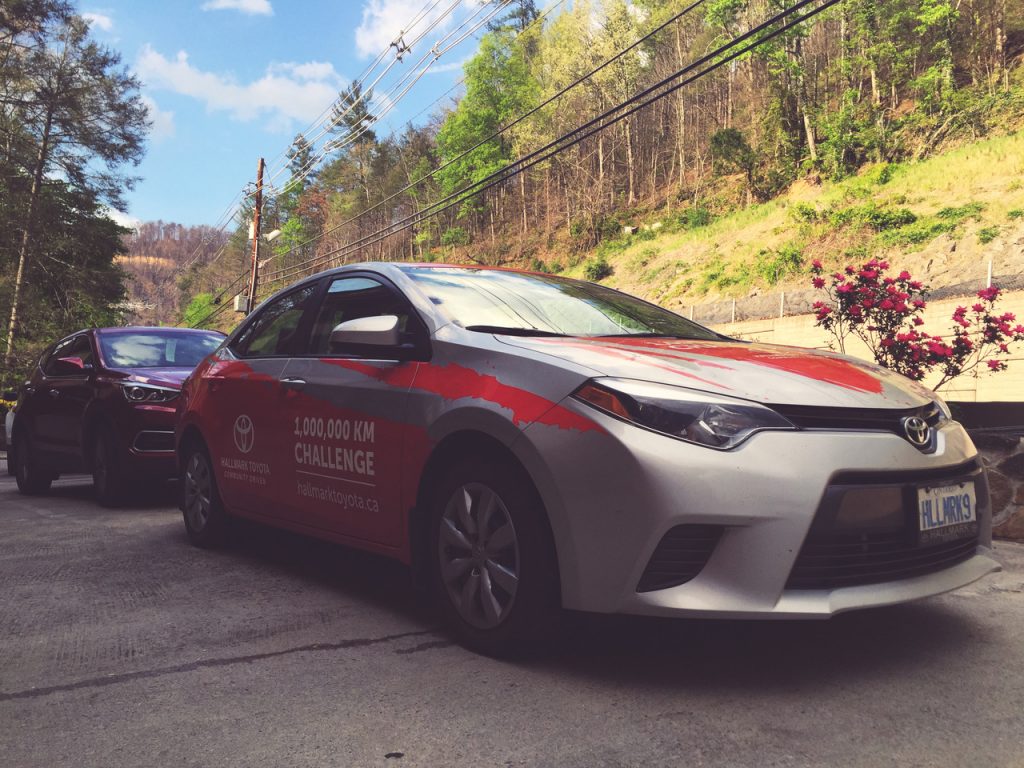 After we passed through Jackson and Memphis, the Corolla pushed on with ease in despite the rainy interstate. We finally arrived in North Little Rock, Arkansas where we parked and got some sleep at a local air B&B. It was the next day that we drove to Pinnacle Mountain, parked, hiked and then rock climbed 1.65 miles up a mountain to some of the greatest views in Little Rock. That evening we drove to the Verizon Centre, where we attended an unforgettable Tom Petty concert. Soon enough we drove north toward Missouri, veering off the beaten path, down some dirt roads to Hawksbill Craig Trail for some more hiking and incredible views at Whitaker Point. 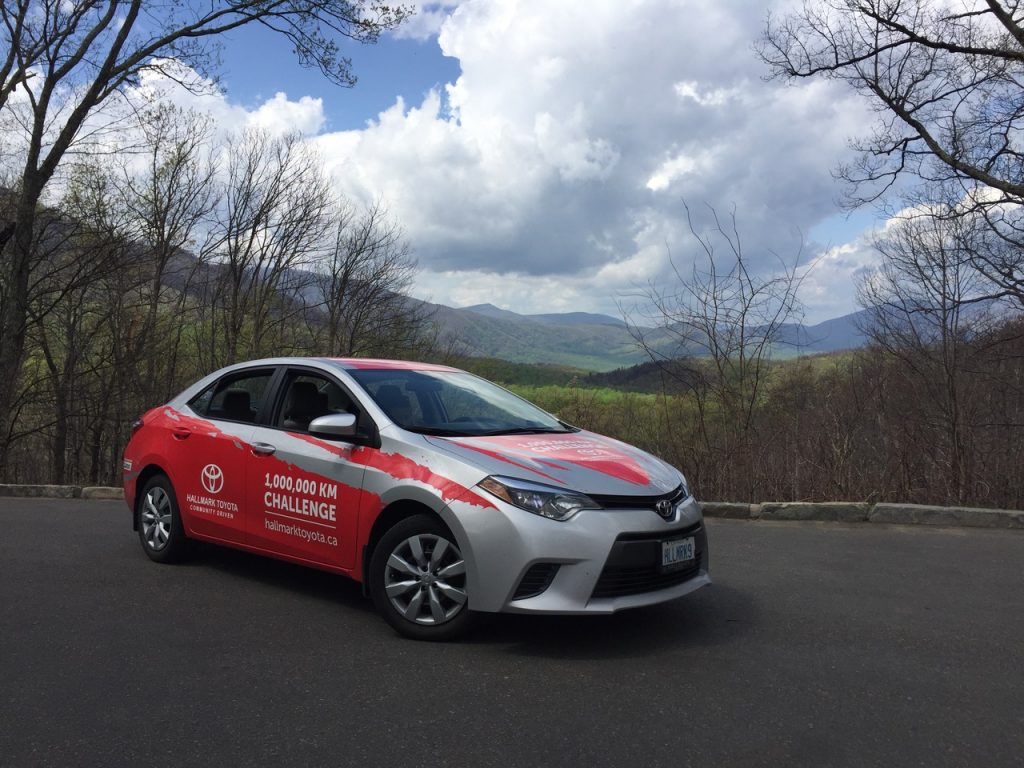 30,683 bugs on the windshield later, we entered Missouri, passing through St. Louis and then into Illinois, all the while the strong bright lights on the Corolla lead the way into the night. Some rest time was long overdue when we finally arrived at a Holiday Inn in Indiana. Bright and early the next morning we made the final haul back toward Ontario, where we hit 81,000 km on the Corolla. We cut up through Ohio where the land was very flat and wind turbines littered the expanse of soil. Then it was onto Detroit, Michigan where the ghost houses and factories once had been thriving. The 6-day journey brought us almost 5000 kilometers, 8 tanks of gas with amazing gas mileage. (averaging 6.44 L / 100 km), through 11 different states, various plateaus, changing sceneries and even though everything changed around us, the Corollas power, persistence, control, durability, and reliability stayed the same throughout the whole journey. Looking forward to the next road trip, and without a doubt will take the Corolla again.