(TORONTO, ON – April 12, 2017) It’s only natural. In the busyness of city-based work life there emerges a growing urge to “get away”. For millennial-aged professionals confined to city limits, oftentimes these getaways are unplanned, and are of the casual, less extreme kind. (No time for summiting a mountain – a drive to the scenic point will do!) 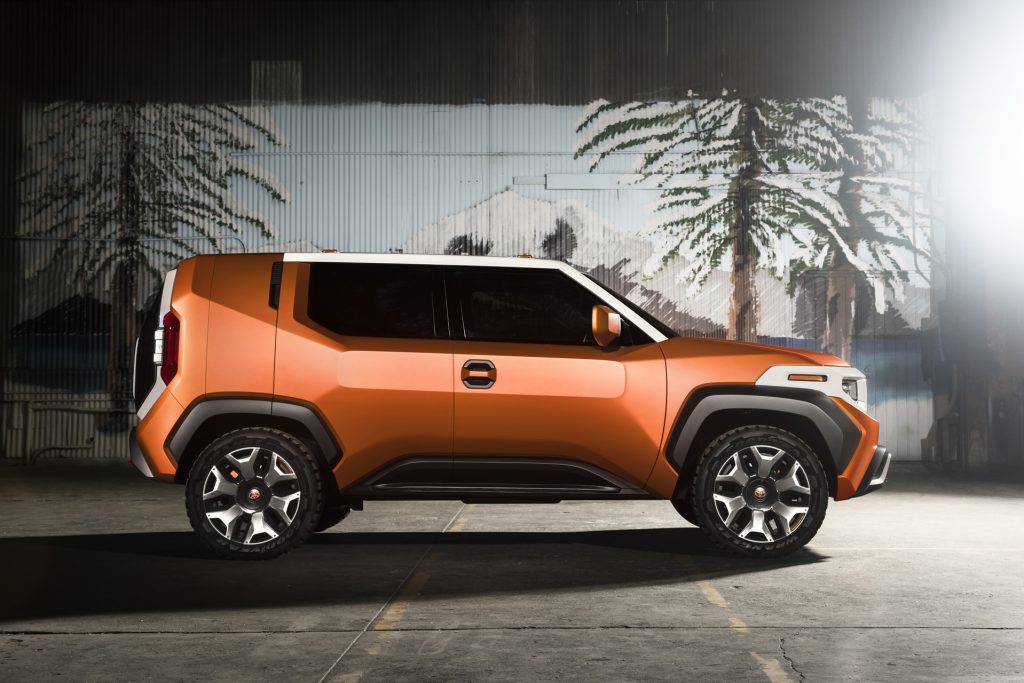 It’s a four-wheel drive toolbox penned by Toyota’s Calty Design Research Inc. in Newport Beach, California. With its long list of unique functionalities and a Rugged Charm compact design, the FT-4X is the seamless conduit of popular Casualcore – rather than hardcore – outings by anyone, anytime.

“As designers, we’re investing deep thought into the emotional connection with our cars,” said Calty President, Kevin Hunter. “The Toyota FT-4X is not simply a concept where style meets function; it is a thoughtful, charming and engaging experience that adds real pleasure and convenience to the journey. We focused on how a crossover vehicle can add fun and value to casual adventures both in and out of the city, thinking about how someone would use it, and what they would love to do with it.”

THE EMERGENCE OF CASUALCORE EXPLORATION

A shift from multiday, extreme, high-effort excursions to brief, unplanned, casual adventures is an overwhelming reality for Generation Y. Millennials are fond of the outdoors, but operate almost always indoors. They enjoy venturing into to new neighborhoods and national parks, but hardly plan ahead. Their countless interactions on social media bring inspiration. It is the busyness of their nonstop daily lives that pushes them past the precipice of “liking” a digital snapshot into the realm of creating their own, in reality. Their adventures begin curbside, in a parking structure, or in the depths of an underground garage. 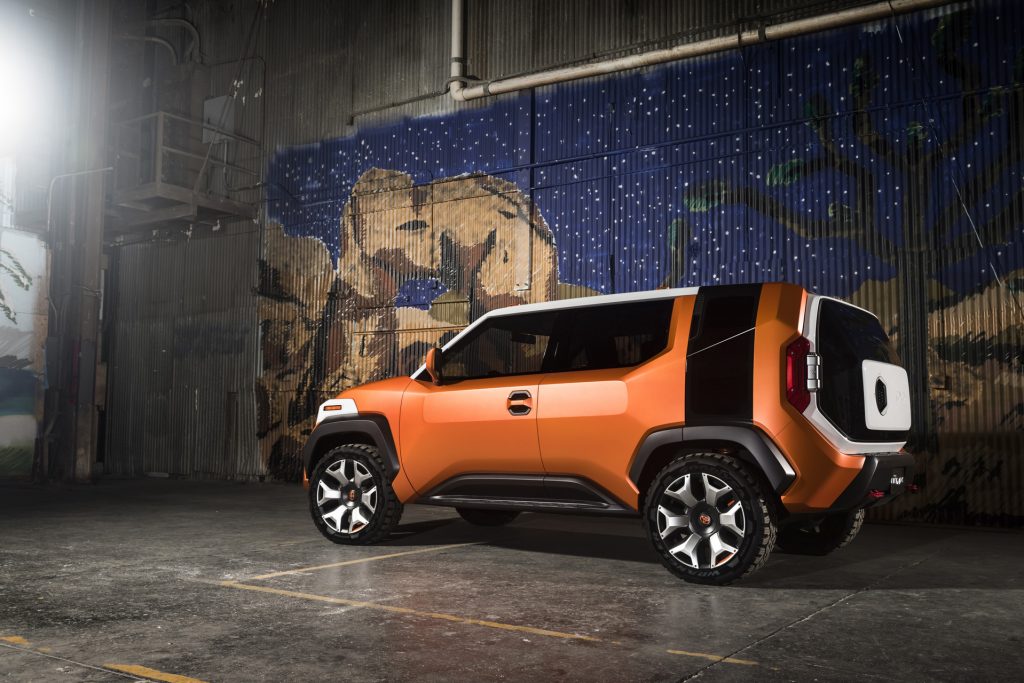 Dinner on the beach during a beautiful evening; tailgating with friends while listening to music; visiting a favorite trailhead for a run or dog walk; settling next to a campfire for an overnight desert stay – these are the types of quick escapes that an increasing number of young, career-minded urbanites hold dear.

Always ready to go? They are – and so is the Toyota FT-4X.

Casualcore adventures originate in the city. Knowing this, Calty’s designers instituted a Rugged Charm ethos when creating the FT-4X. Rugged Charm places value on simplicity, capability, durability, and Toyota lineage. Furthermore, it takes into account compact, sturdy dimensions, and a charming ubiquitous tactility of grips, handles, and controls (the notion of feeling a satisfying mechanical reaction to a user’s input).

“You can really tell that we had a blast designing the FT-4X because it looks fun to use and fun to drive,” described Calty Studio Chief Designer, Ian Cartabiano. “I love this idea of mechanical satisfaction because while we’re living in today’s digital world, we took something that’s based on physical movements and made that a large part of what this vehicle is. We want everyone to interact with this car and feel a sense of delight and excitement.” 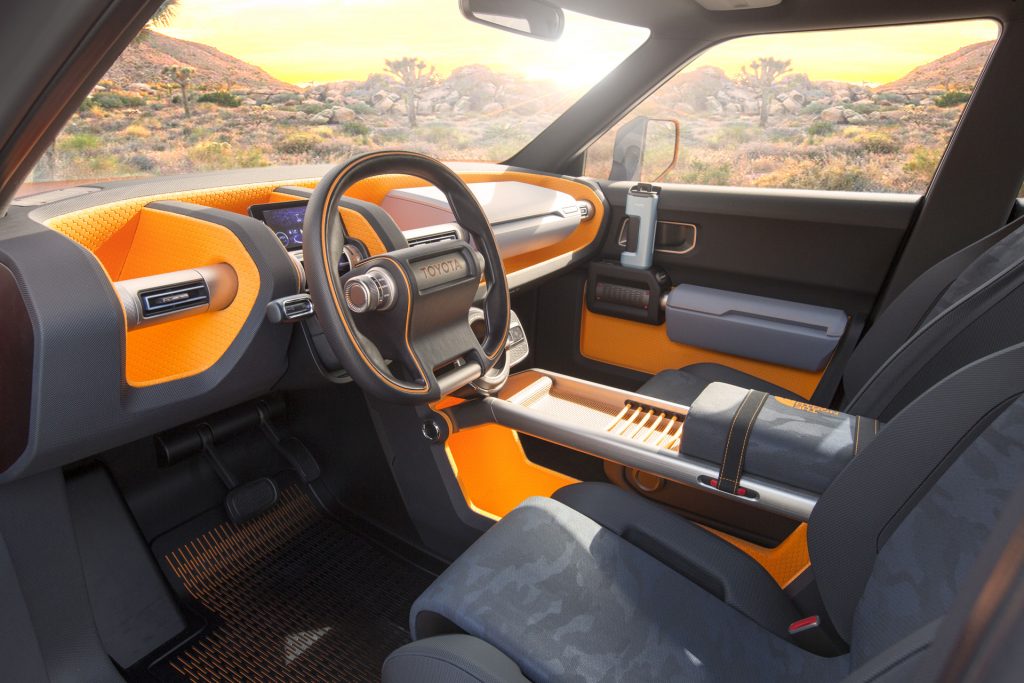 Designers approached their work uncharacteristically. Rather than begin their styling processes at the nose or profile, they began at the rear. Why? In their months’ long research, they noticed that basecamp for Gen Y explorers was oftentimes the destination itself. Cherished experiences were had in and around this basecamp, usually at their vehicle’s tailgate or hatch.

Small, yet strong outdoor activity gear inspired the FT-4X’s expressive looks. For its exterior, stylists imbued an X Theme throughout the Toyota New Global Architecture (TNGA) C-Platform. Imagine this: At the center of a vertical X (which bows outward) is a door handle, or, in essence, the widest part of FT-4X. This places the broadest area near the driver and passenger, creating a natural protective zone. At the rear, the bowed vertical X can be seen at the rear hatch, again placing the door handle at the center and creating a protective space. 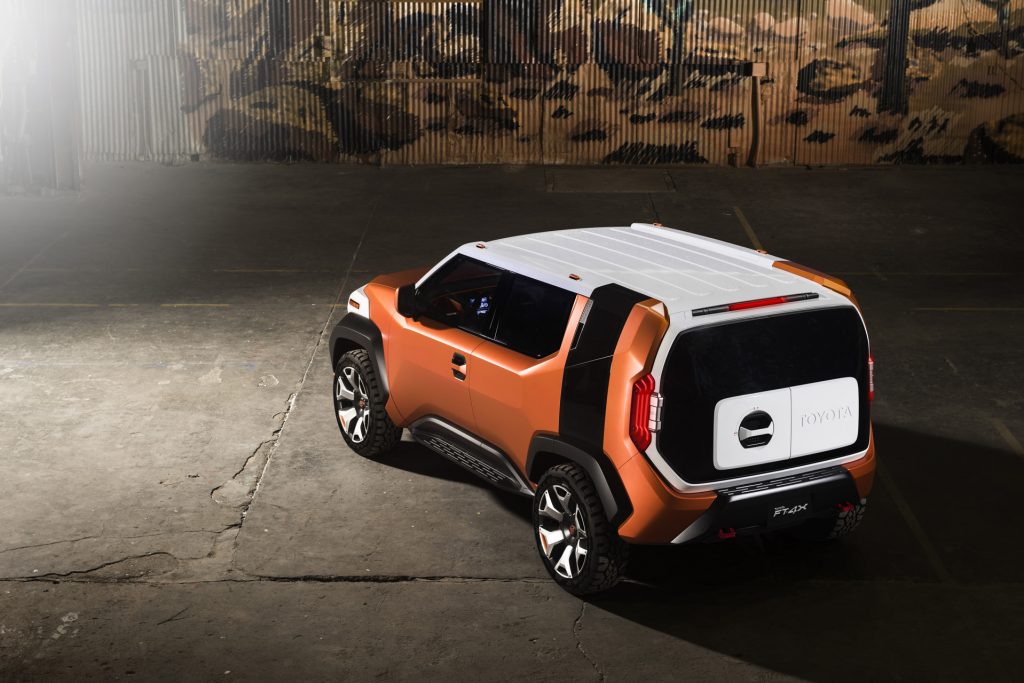 Now, imagine another X, but this time horizontal, or flat, placed at the top and bottom of the vertical Xs. At each of the four corners of the bottom X is an 18-inch wheel wearing a custom 225/55R-18 Goodyear® All-Season tire. The FT-4X stands 1.62 m tall, is 4.25 m long, and has a wheelbase of 2.64 m. Its form emanates simple sturdiness front to back, top to bottom. It’s X Theme abound.

The rear hatch is a modern engineering marvel. Called Multi-Hatch, it opens two ways: horizontally in Urban Mode, and vertically in Outdoor Mode. Urban Mode splits the hatch in half and makes for easier curbside gear loading when clearance is limited. Outdoor Mode opens the one-piece hatch upward, creating an impromptu shelter from the elements. The door’s design also incorporates a satisfying mechanical touch: a rotatable handle that users turn to select its opening mode. The deeply set handle is capable of being gripped by a gloved hand, say, when loading or unloading while snowboarding, or when out-and-about on a wintry day.

Twin red hooks sit below the Multi-Hatch within the rear bumper. These high-visibility reflective pieces are secure anchor points for vehicle recovery and the tying down of loads, if desired. Big item hauling is simplified with a reinforced flat roof, plus, a tie down hoop placed at each of the roof’s corners. Extra utility is provided by power supply outlets set at the base of the tie down hoops. Users can power a variety of campsite electronics and lighting or roof rack accessories thanks to the convenient outlets.

Generous approach and departure angles add to the FT-4X’s prowess on a variety of paved and unpaved paths. Wide black-painted over-fenders lend a tough look to the exterior and engulf the beefy Goodyear® rubber. A vertical Picture Window set above the driver’s side rear fender pays homage to the classic version brandished by Toyota’s iconic Pickup Xtracab truck and first-generation 4Runner sport-utility vehicle. The window glass is removable and interchangeable, allowing for owners to personalize their FT-4X even further with multiple opaque colour or tinted glass options. The rear door handle is discretely placed fore of the vertical window and high above the beltline, much like it is on the current Toyota C-HR. 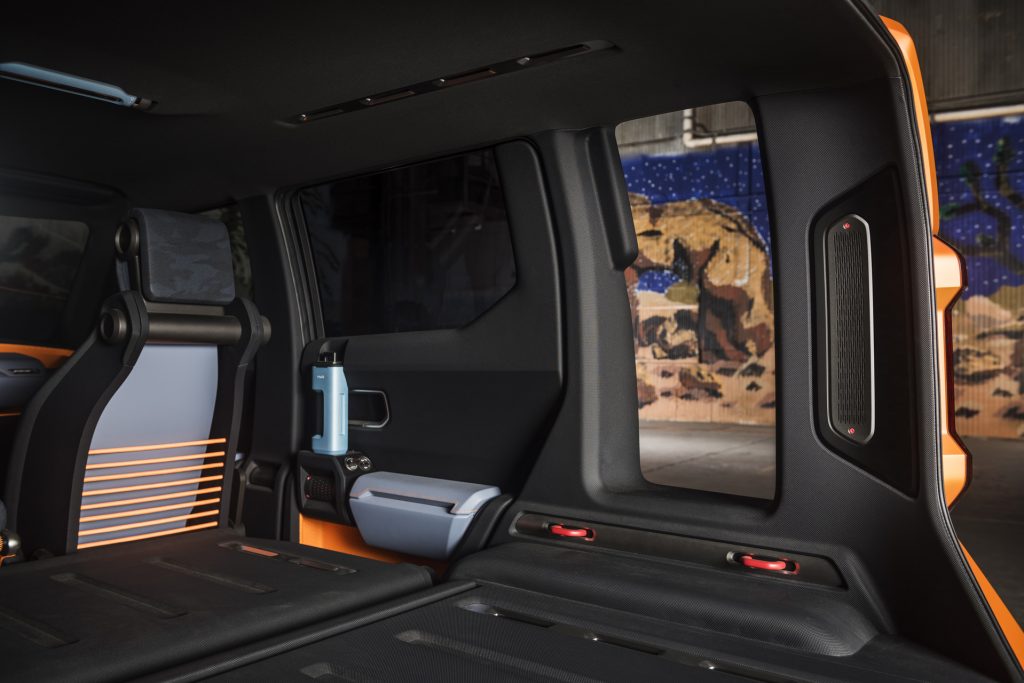 Sculpted rocker panels at the lower portion of the doors enhance underbody protection and durability when venturing off the beaten path. And whenever the FT-4X does find some heroic scenery, a GoPro® HERO5 Session™ camera built into the driver’s side rearview mirror can capture it all.

Of course, the X Theme finds its way up front too. At the center of the nose’s vertical X is a classic, extra-large embossed TOYOTA logo that’s flanked by bright LED headlamps. Like the rear, reflective tie down hooks set in the lower bumper add to the crossover’s looks and deftness. Another nod to classic FJ Land Cruisers and Pickup models of yesteryears: the recognizable horizontal orientation of the FT-4X’s grille, headlights, and bumper

Proceeding from work to play, indoors to outdoors, without advanced preparation can be a recipe for forgetting some essential equipment. No worries (as Gen Y-ers might say)! The FT-4X is a rolling gear box. Not only is the interior’s concept that of a large open space having plenty of easily accessible storage for basic equipment, but it is basic equipment itself. Passengers can easily identify the space’s purpose based on colouring, as blue classifies closed storage, while orange indicates open storage. 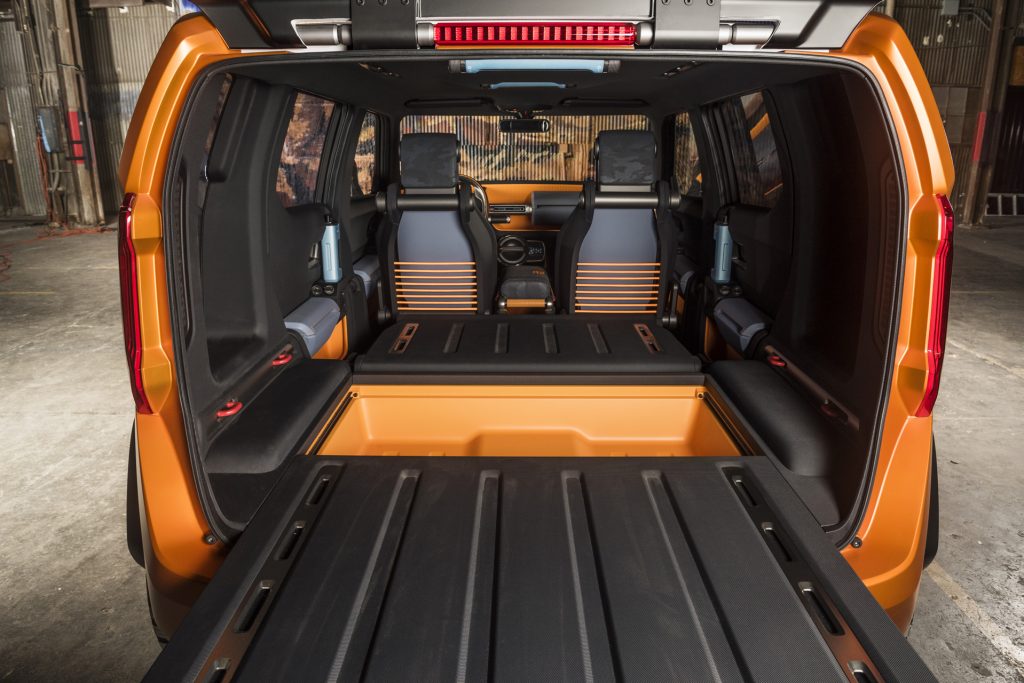 On the inside of the Multi-Hatch with rear Picture Window are twin boxes – one warm, the other cold. They’re designated for a number of functions, such as the temporary stowage of snacks, or the warming and cooling of gear (i.e. gloves, blankets, ice packs, etc.).

The cabin is sectioned into threes: Clean Zone, where the front passengers sit, and where rugged floor mats and door sills were inspired by Japanese sunoko slatted wood flooring; Wet Zone, also characterized by all-weather mats (where passengers can stow damp swimsuits/snow clothing or muddy boots) and located just behind the front seats, as well as below the rear second row bench seat; and, Rear CargoZone. 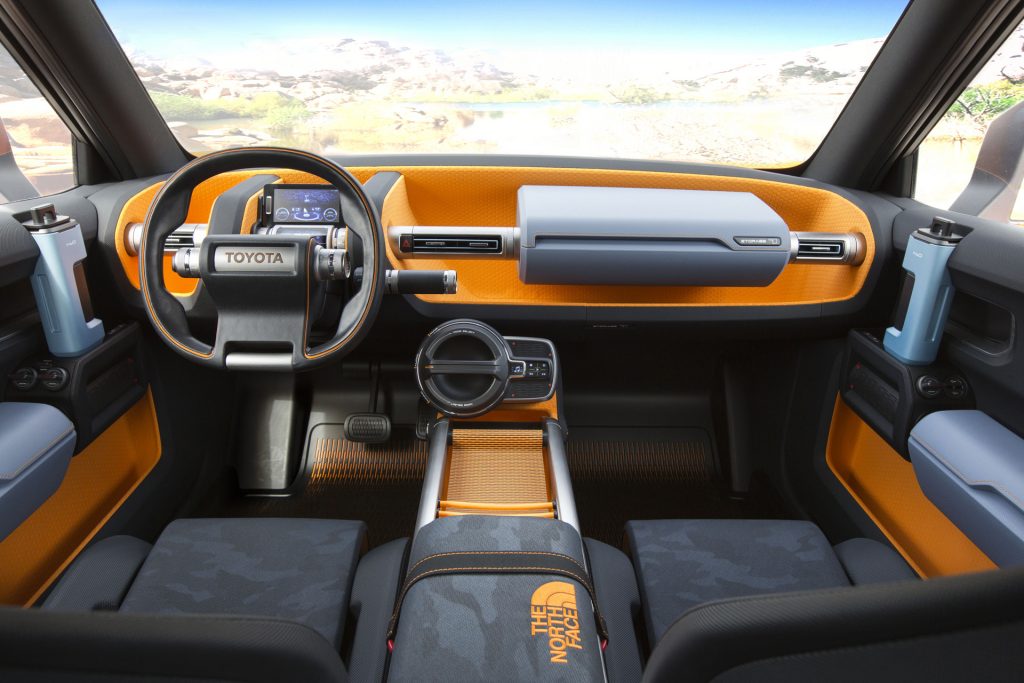 The Rear Cargo Zone’s floor lays completely flat and features topside tracks for securing cargo. A deep storage compartment is hidden underneath, and can be accessed by sliding the floor out toward the Multi-Hatch, transforming the floor into a tray. Folding the second row bench seat down extends the floor’s capacity considerably. Red tie down hooks line the sides of the rear’s cargo hold, too, for added load securing. Above, in the headliner, resides removable inside lighting that doubles as a flashlight. 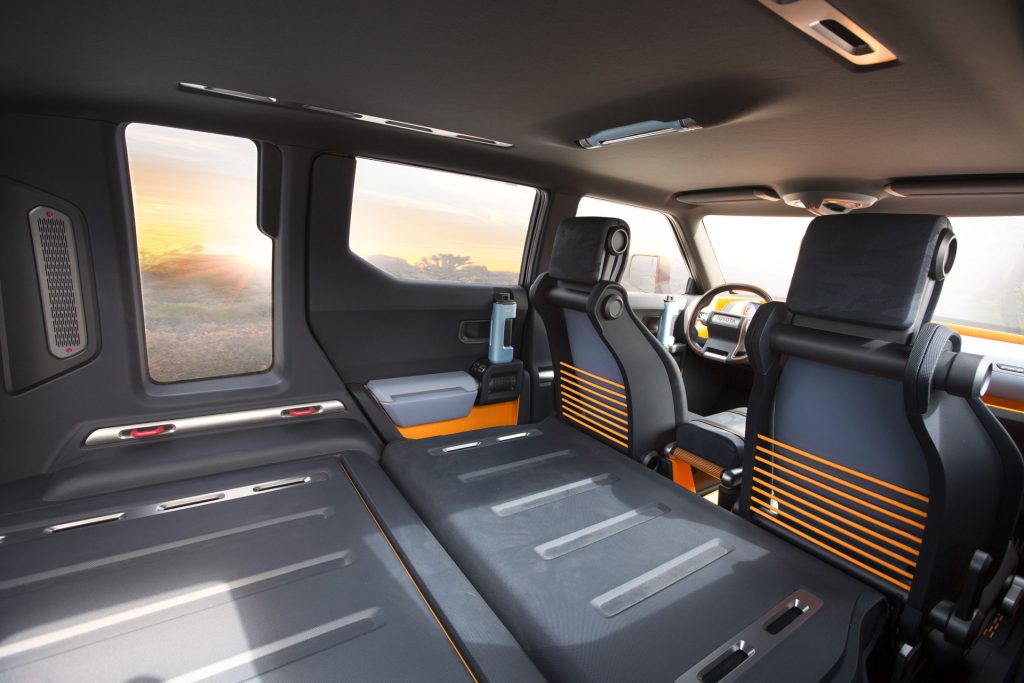 Diving deeper into the cabin reveals more nifty elements. The rear door handles serve as impromptu water bottles. Its armrests have USB outlets and big, rotatable window switches. And, much like the rear’s ceiling-mounted removable flashlight, the dome light can serve as an exterior locator or beacon. 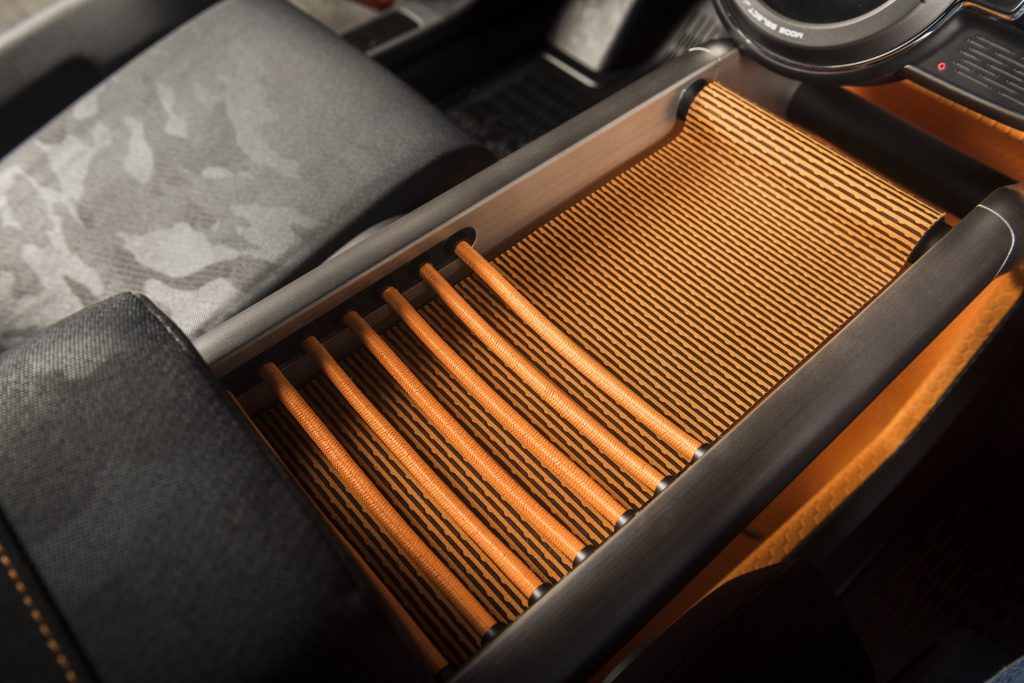 The dash ahead of the front passenger is a mix of blue and orange designated storage. A larger blue chest “floats” above a carved orange bin. On both sides of the chest are slim air vents capable of rotating down in order to warm, dry, or cool clothing such as gloves and hats. A removable multimedia audio system is part boom box, part in-dash stereo and is engineered with an extra-large handle grip (ala exterior door handles). 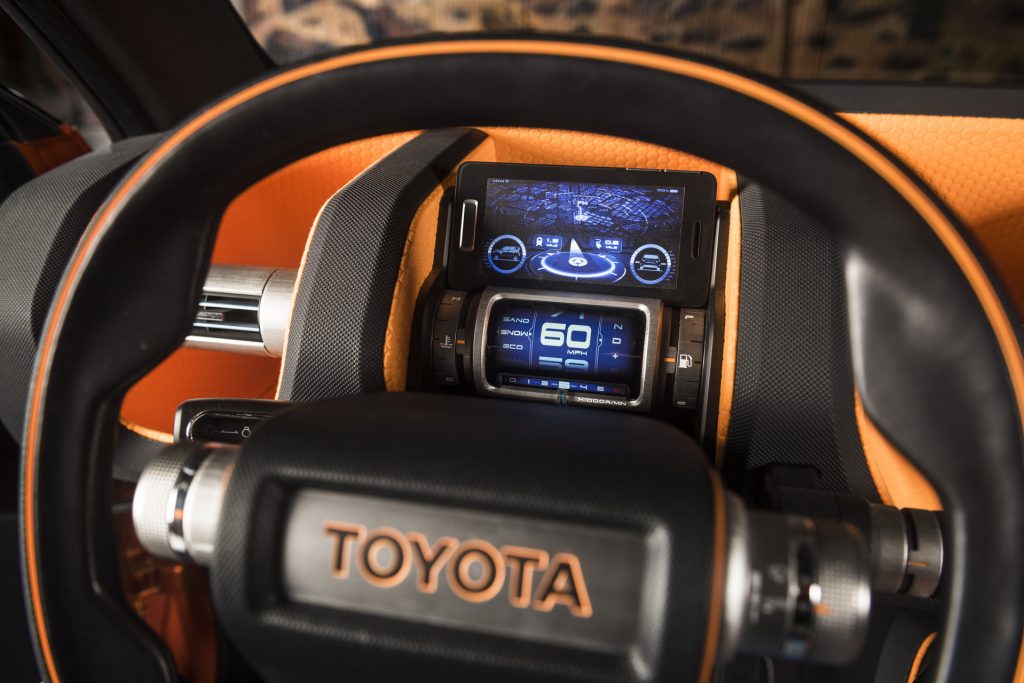 Although there is no traditional navigation screen, designers did include a mobile phone mount directly above the driver’s digitized cylindrical instrument cluster. The concept being that a downloadable navigation application, as well as an application showing digitized off-road instrumentation, can be made available for drivers’ use. Gen Y-ers, Calty’s designers realized, rely heavily on their mobile devices for GPS directions.

The Toyota FT-4X Concept fully embodies “Rugged Waku-Doki” (translation: a palpable heart-pounding sense of excitement) through its numerous clever design ingredients. It charms its tech-savvy, screen-scrolling users with a distinct tactile charisma sensed at every button push, handle twist, and dirt road trekked. Yes, with the FT-4X, never has the divide between desktop and trailhead been as infinitesimal as now.