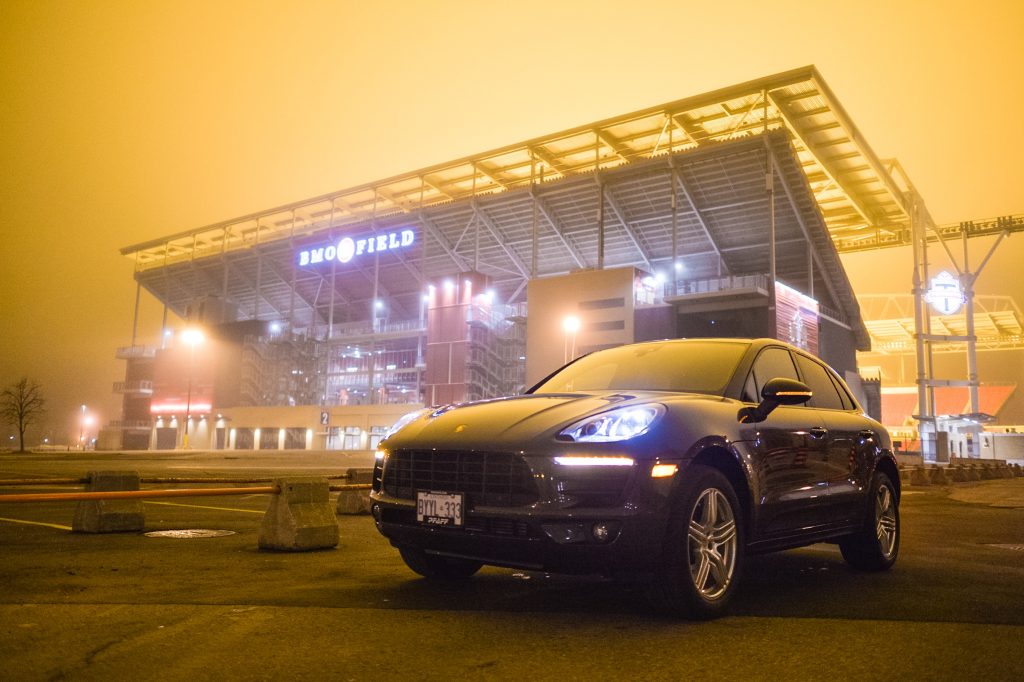 Porsche often doesn’t get a lot of credit for how fast it changes as a car company. Perhaps because the shape of the 911 has stayed consistent for over 50 years; perhaps because it emphasizes tradition as strongly as it does innovation in its marketing. But the company today is very different from the company that rolled the first 356 out of a barn in Austria in 1948, and even different from the company of five years ago. The pace of change at Porsche, much like the pace of its cars, is incredible. This new Macan is an indication of that. 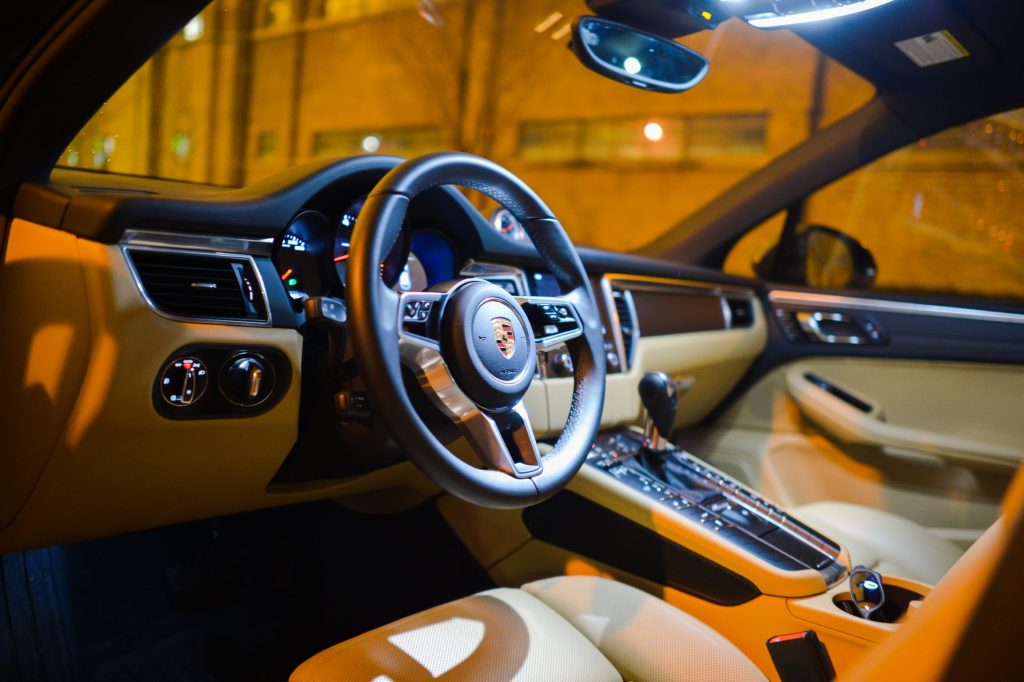 Five years ago, Porsche was already an SUV company par excellence; the incredibly successful Cayenne accounted for over half of its worldwide volume, tearing up the sales charts as fast as it tore around the Nurburgring or across rocky terrain. Engineered for all conditions in a way that only Porsche could, it opened up the brand to whole new segments of the automotive market, and saved the company in the process. The financial success the Cayenne created is the reason Porsche can afford to develop the world’s best sports and racing cars. 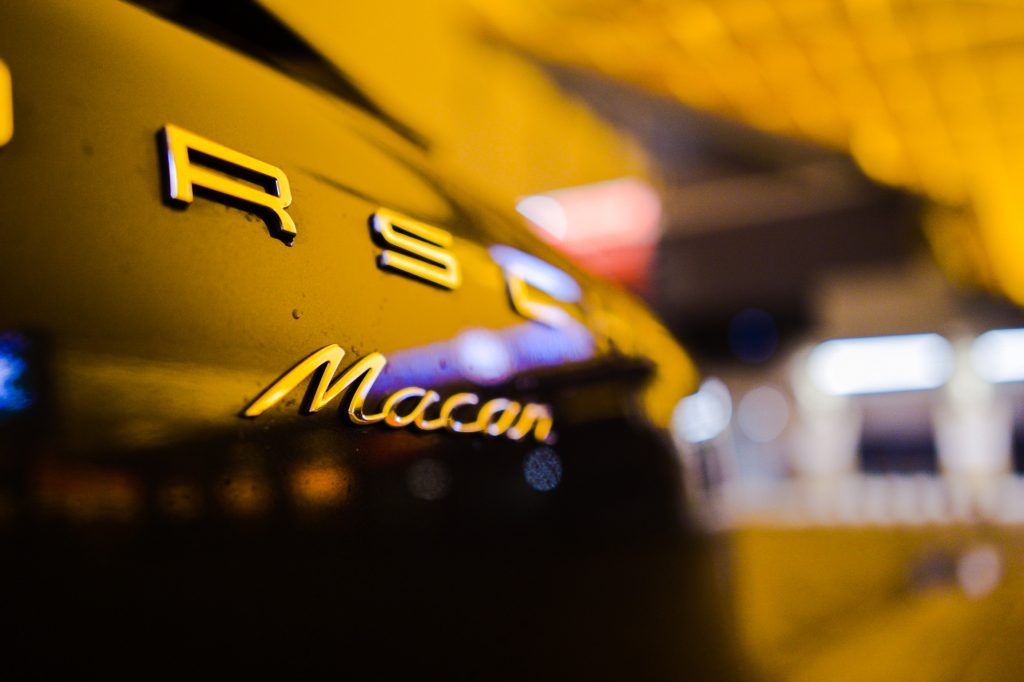 Two and a half years ago, the Macan, a new smaller SUV, arrived, and with a starting price of just $52,700, it’s now the most accessible vehicle in the Porsche lineup. Powered by a 2.0-litre turbocharged four-cylinder engine producing 252 hp, it’s also the least powerful – so I was curious to find out if it still felt like a full-fledged member of the family, or an entry-level stepping stone into your next, “real” Porsche. 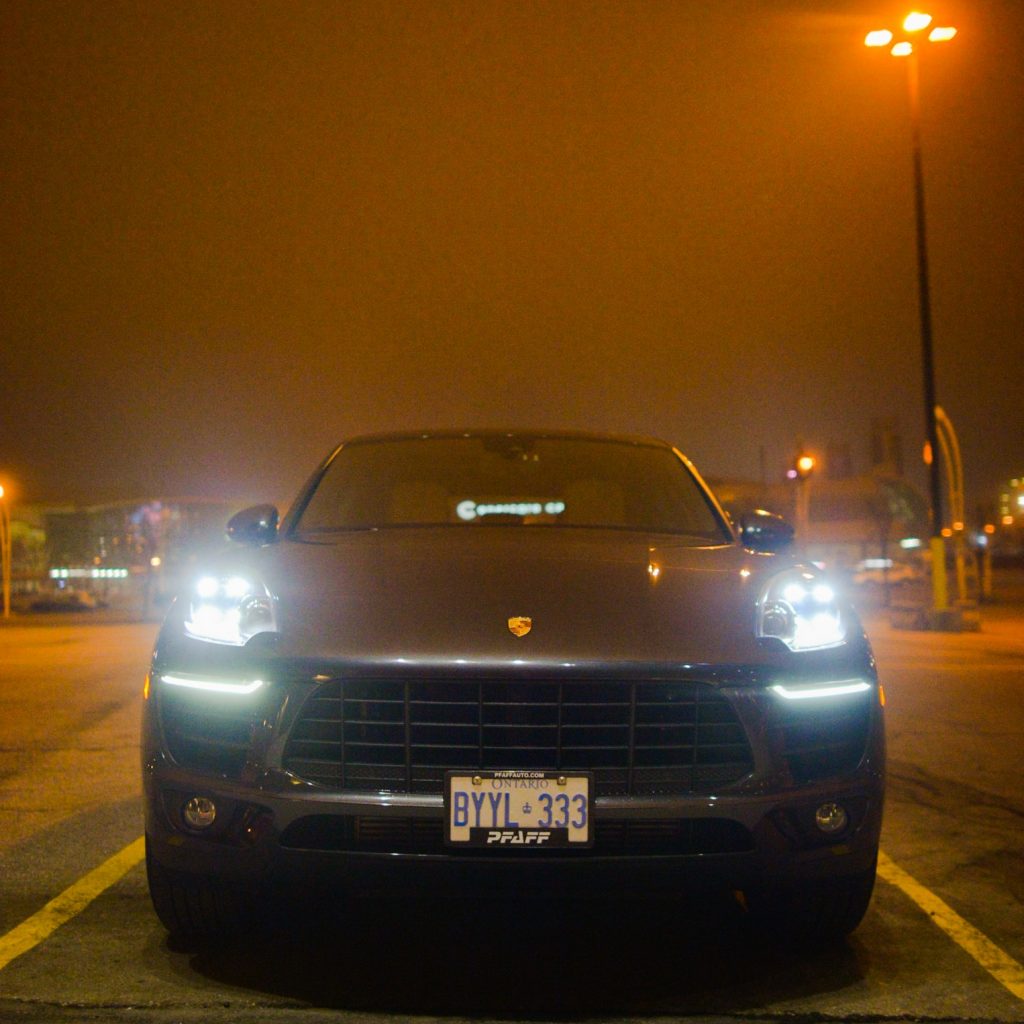 Having spent some serious time previously in the 340-hp Macan S and the 400-hp Macan turbo, I had no doubt that the “base” Macan would steer, handle, and brake better than any similarly-sized SUV in the marketplace. The drivetrain and chassis, while sharing some components and its basic layout with the Audi Q5, are touched by that Porsche magic. The suspension soaks up bumps while delivering exceptional cornering performance. The front brakes feature massive mono-block calipers that slow and stop the Macan like Porsche brakes should. And the staggered-setup wheels and tires are indicative of the Porsche Traction Management all-wheel drive system unique to the Macan: it’s hugely rear-biased under normal conditions, leaving the front wheels to steer and deliver the road feel and precision you would expect from a Porsche sports car. A seven-speed PDK transmission is another high-performance feature, with crisper shifts and sharper response than a conventional automatic. 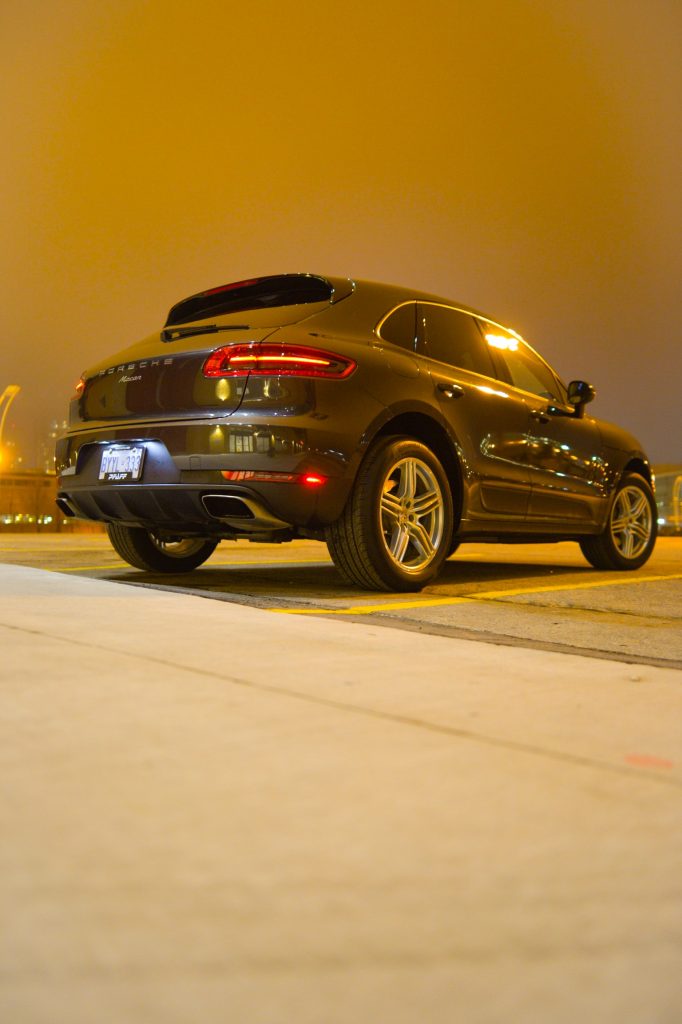 Does the four-cylinder Macan perform? Just look at the specs: a 0-100 km/h time of 6.7 seconds (6.5 seconds with the optional sport chrono package) is more than swift enough, and the engine is remarkably torquey, with a fat wave of the stuff available from idle to redline. The throttle responds promptly to every twitch of your right foot, and the PDK, especially in sport mode, always seems to be in the right gear, rarely requiring you to intervene with the solid, steering wheel-mounted metal shift paddles. What’s missing, maybe, for enthusiasts, is that Porsche sound: the performance is delivered so effortlessly, and without drama, that you’re not actually aware of the swift progress you’re actually making, big numbers on the speedometer racking up without the expected aural stimulation. 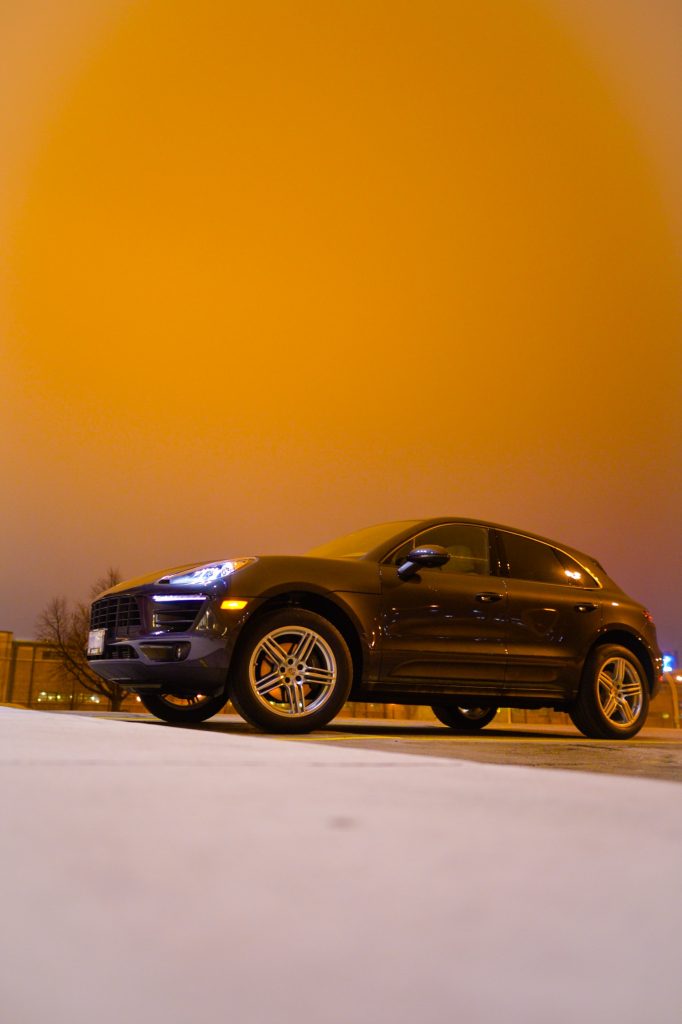 Other than the four-cylinder’s somewhat surprising refinement, there’s little to distinguish the “base” Macan from other models in the lineup. Its interior, if superficially covered in slightly less-upscale materials (you don’t get the Macan Turbo’s leather on the dashboard, or the piano-black trim that’s standard on the Macan S, both available as options), is just as solidly-made, with quality finishes throughout; I actually really like the matte-finish trim panels on the dash and doors. The seats are straight out of the Cayenne, huge, long-distance comfortable, and with a perfect driving position behind the three-gauge instrument cluster. The steering wheel is the same as in every Porsche right up to the 918 Spyder, and incorporates paddle shifters, multi-function controls, and heat. And the new Porsche Communication Management system, introduced for the 2017 model year, is a huge step forward from the old system, with a responsive touch screen and the latest infotainment features. 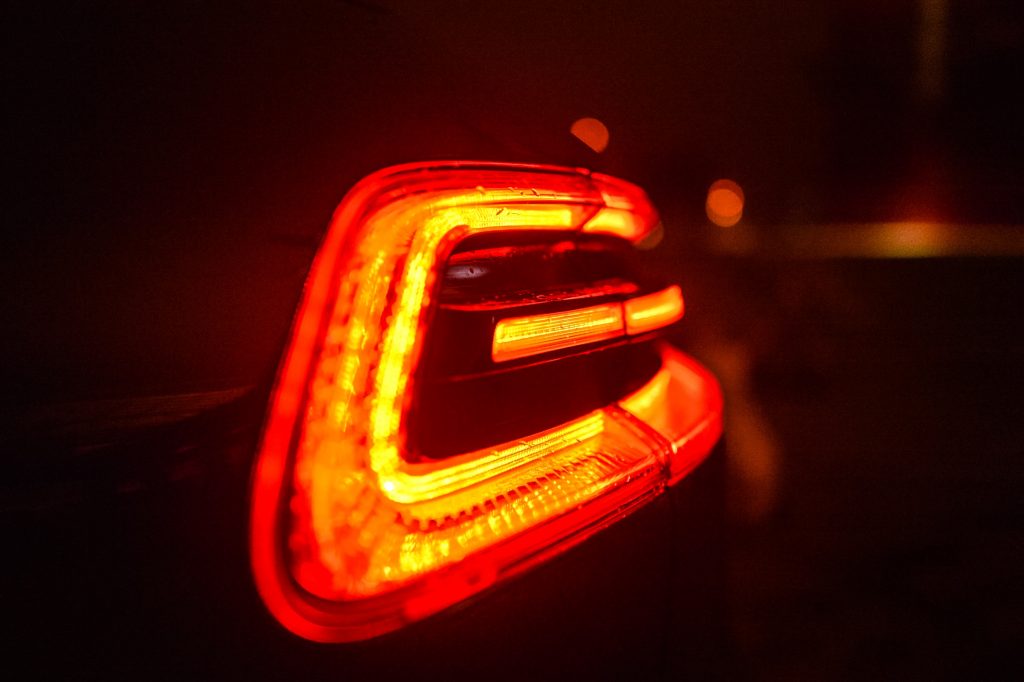 The Macan is versatile, too. There’s plenty of rear-seat room for growing children, and you can flip, fold, and otherwise reconfigure the back to expand the already-generous load space. I took my mom and dad on a road trip with the little Porsche, and they fell in love with it, enjoying the high seating position, the big glass, and the fact that there was more than enough space for their stuff beneath the powered rear liftgate. Make sure, though, that if you ever intend to carry skis, bikes, or anything on the roof, that you order the roof carrier rails, as they cannot be retrofitted after the fact. 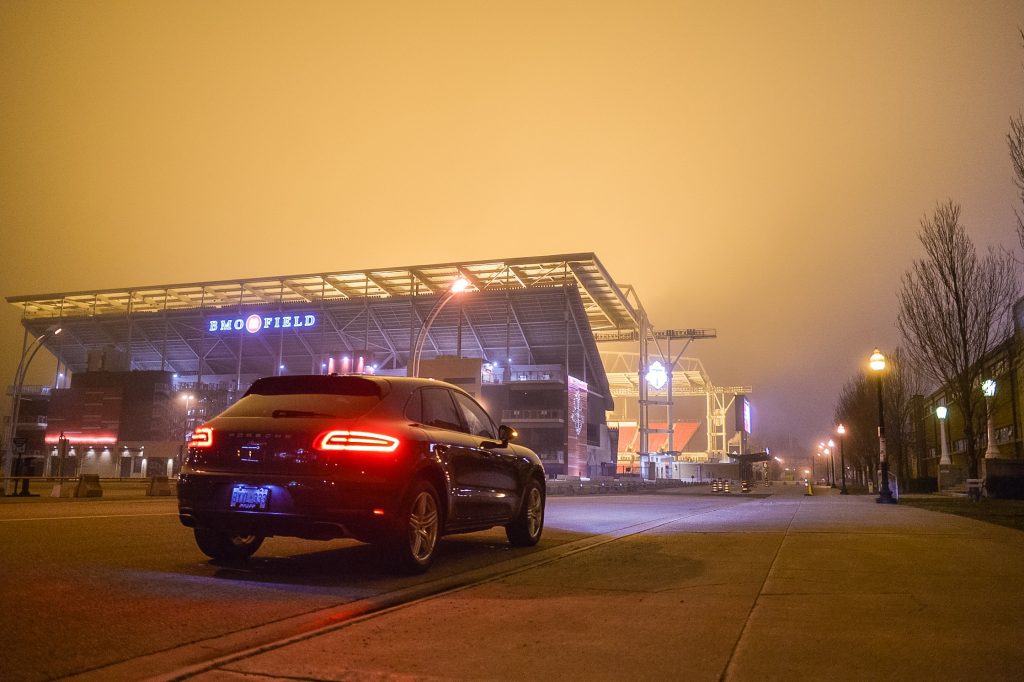 Porsche offers a wide range of Macan models, from this 252-hp entry level model, to the V6, 340-hp Macan S starting at just under $60,000, to the Macan Turbo and a new Macan Turbo with a performance package that adds 20 more horses and a wealth of go-fast upgrades. Which one is best for you depends on your budget, and on your personal needs. For most, an entry-level Macan like this with a few choice options would be an ideal daily driver, swift and efficient and with the latest technology and Porsche handling and precision. Personally, I’d go light – really light – on the options and step up to the Macan S, its snarling V6 delivering an emotional connection on par with its superb performance.
Browse our Macan inventory here.
Previous Post Next Post