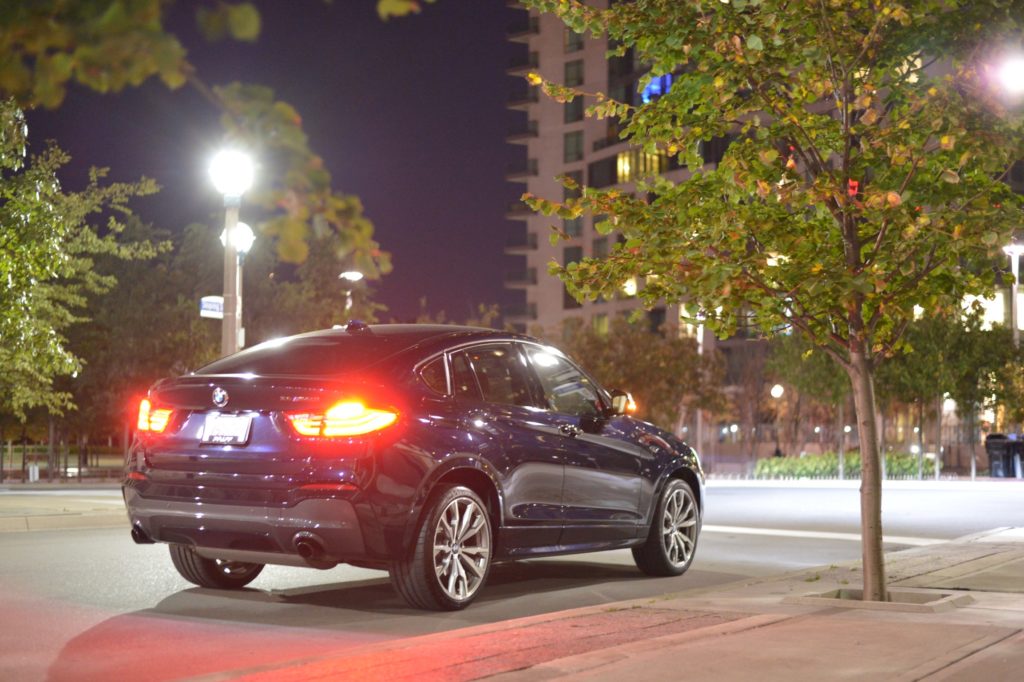 I was not predisposed to like the BMW X4 M40i. The idea of a performance SUV is somewhat puzzling to me; lowness and lightness, two characteristics that few SUVs have, are inherently lacking. Top that with the X4’s further twist of a chopped-down roofline and sloping rear hatch, and you limit the versatility that makes SUVs appealing in the first place. But much to my own surprise, I really fell for this truck in a big way, and it’s all thanks to the way it drives.

Badged as an “M40i,” the hot X4 is sort of a halfway house between the mainstream models and the full-on M vehicles; there isn’t an X4 M like there is an X5 M and X6 M, so for now it’s the most powerful and best-specced X4 you can buy. In that sense, it’s like my own M235i, a 2-series that has some extra speed, big blue-painted brakes, Michelin Pilot Super Sport tires, sporty suspension tuning, and exterior and interior addenda that add some spice to the styling. Unlike the M235i, it has a full-on M engine as well, a 365-hp turbocharged inline-six that also features in the spectacular new M2, one of the year’s hottest and most desirable performance cars. 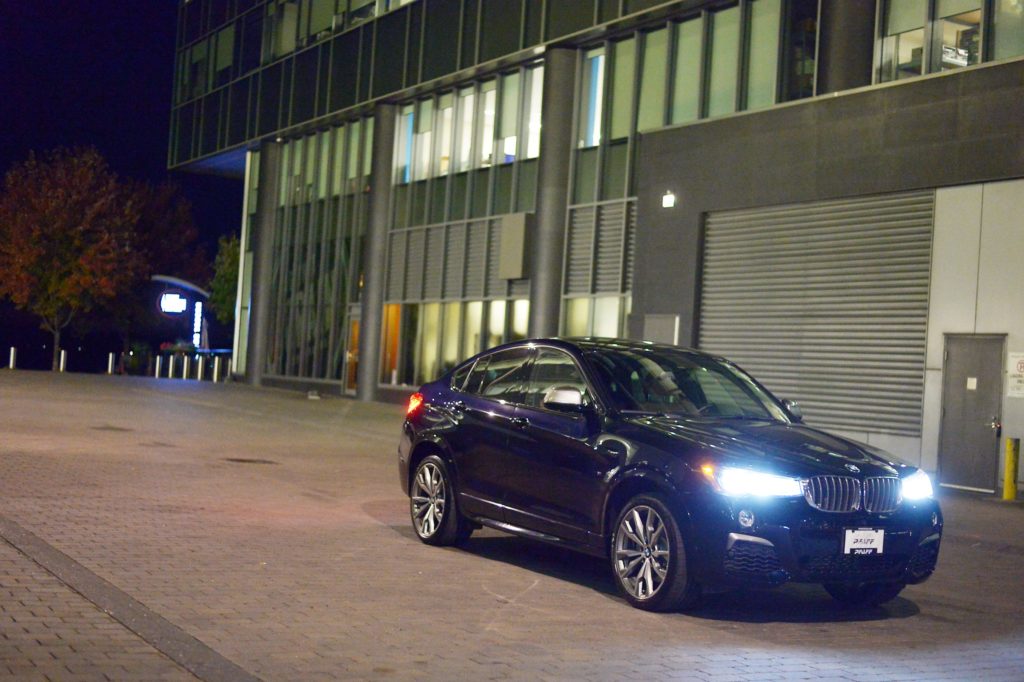 Even without the dealer-fitted M Performance accessory exhaust, the X4 M40i sounds spectacular, ripping through the gears with an edgy snarl that belies its turbocharged nature. As you’d expect, the turbo torque delivers instant midrange punch no matter what speed you’re going or which of the eight paddle-shifted gears you’re in; what you might not expect is the sharp throttle response and the lack of lag. Unlike the M2, which comes with either a six-speed manual or a seven-speed M DCT dual-clutch box, the X4 M40i is fitted with a ZF eight-speed automatic, but the presence of a torque converter does little to blunt the performance feel.

The rest of the M40i’s controls back up the powertrain’s strength and precision, and all feel good enough to live up to the M badging. The slightly-too-thick steering wheel (a characteristic of all M cars) guides hefty steering that delivers terrific road feel. The brake pedal has a relatively long travel that lets you accurately meter out the monoblock calipers’ stupendous stopping power. Body control in corners and over pavement undulations is sports-car good: the X4 M40i corners fast, flat and true, and there’s none of the heaving sensation you get in aggressive driving that you do in some fast SUVs. 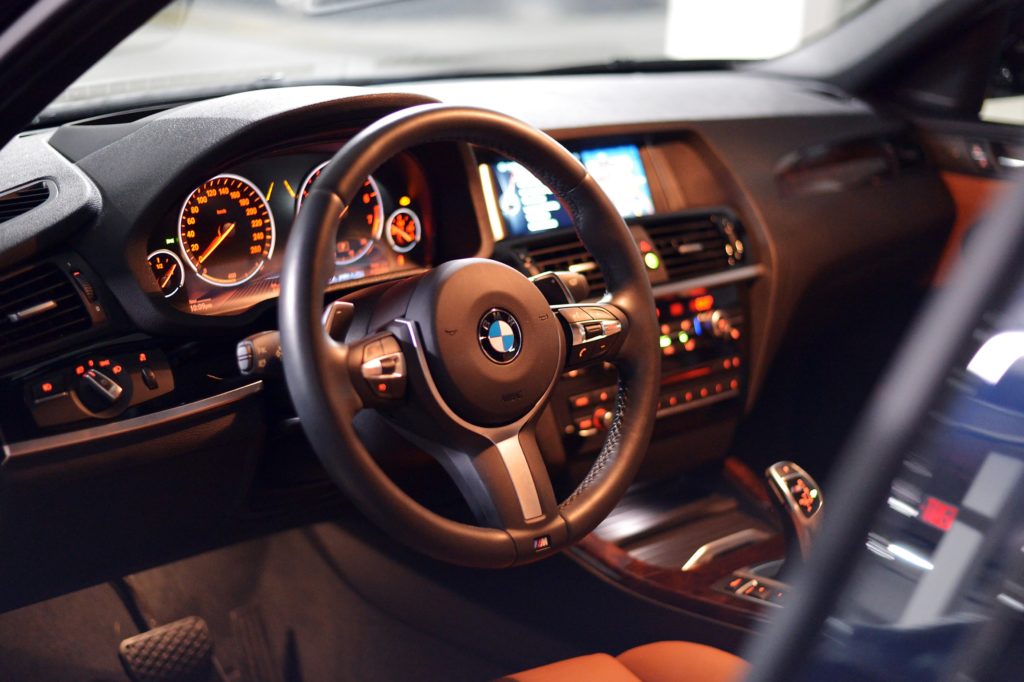 The downside of this M2-like performance is an M2-like ride, which can feel a little brittle in the city; setting up the sport button to engage a more aggressive drivetrain without stiffening up the shocks helps, but not a lot. A bevy of driver-assist systems, including lane departure warning (which vibrates the steering wheel when you stray to the edge of a lane), frontal collision prevention (which flashes an icon in the heads-up display) and pedestrian collision prevention, mean that the driving experience lacks the delicious simplicity of the little coupe – sure, you could turn all the assists off, but then what’s the point?

How does the M40i measure up as an SUV? Better than you might think. While the roofline slopes, rear-seat space is actually quite decent, and the cargo area is large, if a little oddly shaped and with a tiny rear window. Storage bins aplenty litter the interior, and the rear seats split and fold if you need to carry something large or awkward. The seats themselves are terrific – the sporty buckets up front with adjustable side bolsters are broad and comfortable, but can be set up to hug you tightly in corners. And while BMW’s doesn’t build interiors with quite the level of refinement and polish as Audi does, there’s no question that the cabin is solidly constructed out of robust materials. 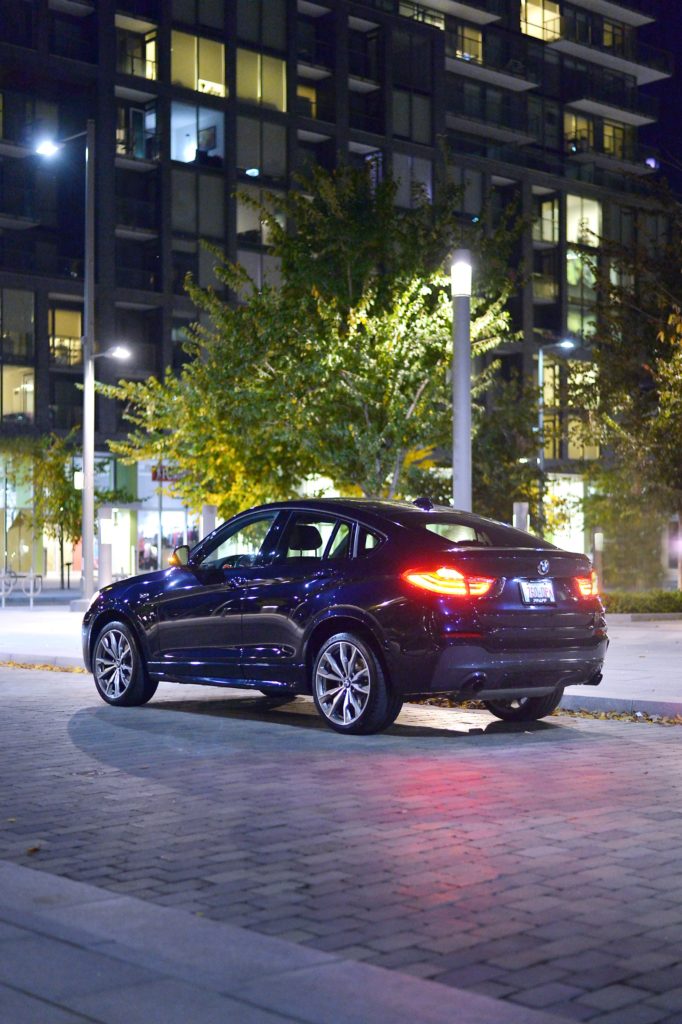 Like other M-halfway-house vehicles, the X4 M40i comes with a long list of standard equipment. In addition to performance-enhancing features like the 20-inch wheels, fat tires, big brakes, and adjustable suspension, there’s a terrific sound system, iDrive with high-resolution navigation, and more. BMW’s been working at integrating the latest technology into its cars longer than any other manufacturer, and it shows in how well all the systems work together: iDrive is intuitive, seamless, and responsive, but never intrusive; the heads-up display is simple and clear; and you can control all the driver assists with one switch between the air vents.

It’s an impressive package,the X4 M40i – and with a starting price of $60,700, it looks like conspicuously good value, given that an M2 with the same engine and fewer features lists for over $4,000 more. No, the two vehicles don’t address the same buyer, or ultimately, achieve the same goals. But the presence of the M2’s rasping, crackling motor in the X4 M40i gives it a level of excitement and character that you wouldn’t expect, and elevates it above the competition. 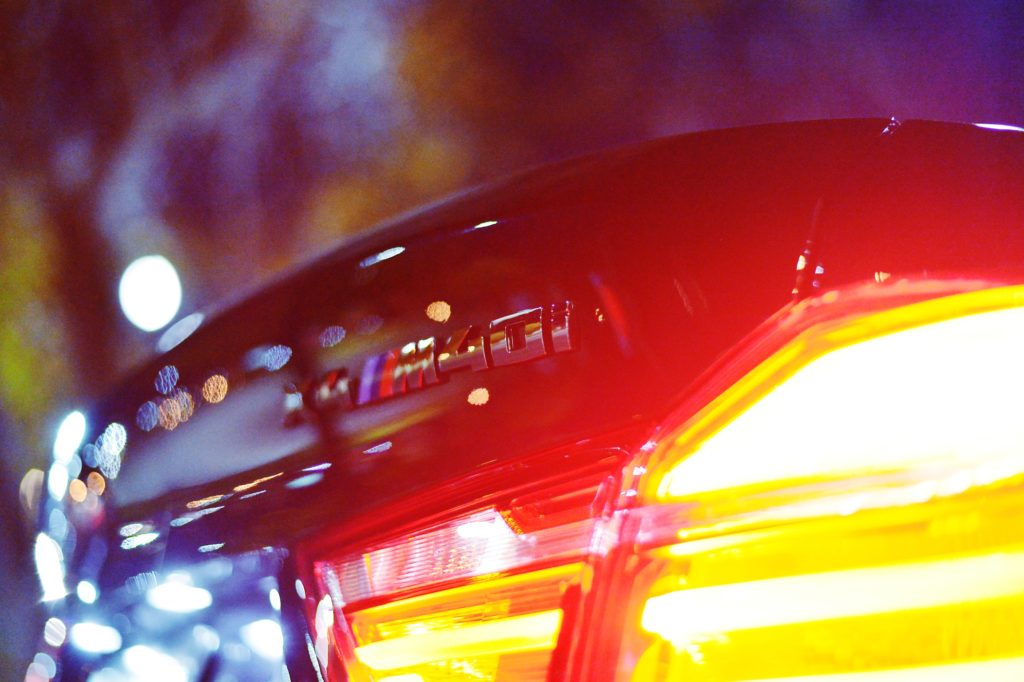