Pfaff Auto | Blog | The new Audi A5 and S5 Sportback

The new Audi A5 and S5 Sportback

Seven years after the birth of the A5 Sportback, the new version now makes its appearance. The five-door coupé blends elegant, emotional design with high functionality and abundant interior comfort. The family-friendly car is perfectly connected and offers the latest infotainment features. Plus, the second generation comes with a completely reengineered suspension, high-performance drives and innovative driver assistance systems. The S5 takes to the road with a new six-cylinder turbo engine developing a mighty 354 hp and 500 Nm (368.8 lb-ft). In a new departure, the A5 Sportback is also available as a bivalent g-tron, which customers can run on either Audi e-gas, natural gas or gasoline. 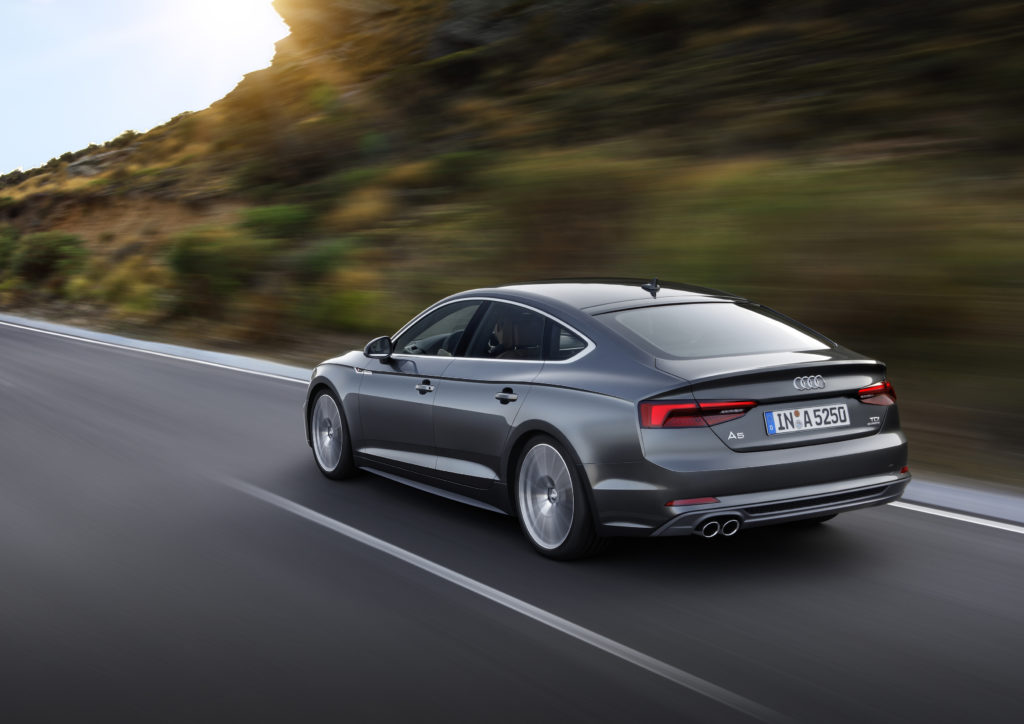 Exterior design
The Audi designers have brought together dramatic shapes and athletically taut surfaces in the design of the new A5 Sportback. The stretched wheelbase, the short overhangs and the long, wraparound front lid with power dome emphasize the dynamism of the five-door coupé. The three-dimensionally modeled Singleframe grille is significantly flatter and wider than on the previous model.

The wave-pattern shoulder line imparts the A5 Sportback with emotional elegance. It is even more strongly accentuated than on the previous model and traces all three dimensions. This creates an interplay of light and shadow. The pronounced bulges over the wheel arches underscore the quattro DNA. The rear end exhibits horizontal, equally highly precise styling.
The stretched luggage compartment lid terminates with a characteristic spoiler edge.

Interior
The new Audi S5 Sportback has grown significantly inside. Its interior length has gained 17 millimeters (0.7 in), the shoulder room for driver and front passenger up to 11 millimeters (0.4 in) and the rear knee room 24 millimeters (0.9 in). The sophisticated materials, precision of fit and color harmonies in the interior are typical of Audi. The horizontal architecture of the instrument panel creates a sense of spaciousness. The optional ambient lighting with 30 colors to choose from always evokes a fitting interior mood.

With 480 liters (17.0 cu ft) of luggage capacity, the A5 Sportback rates among the best in its class. Audi also offers the option of sensor control for opening and closing the standard-fit electric luggage compartment lid. 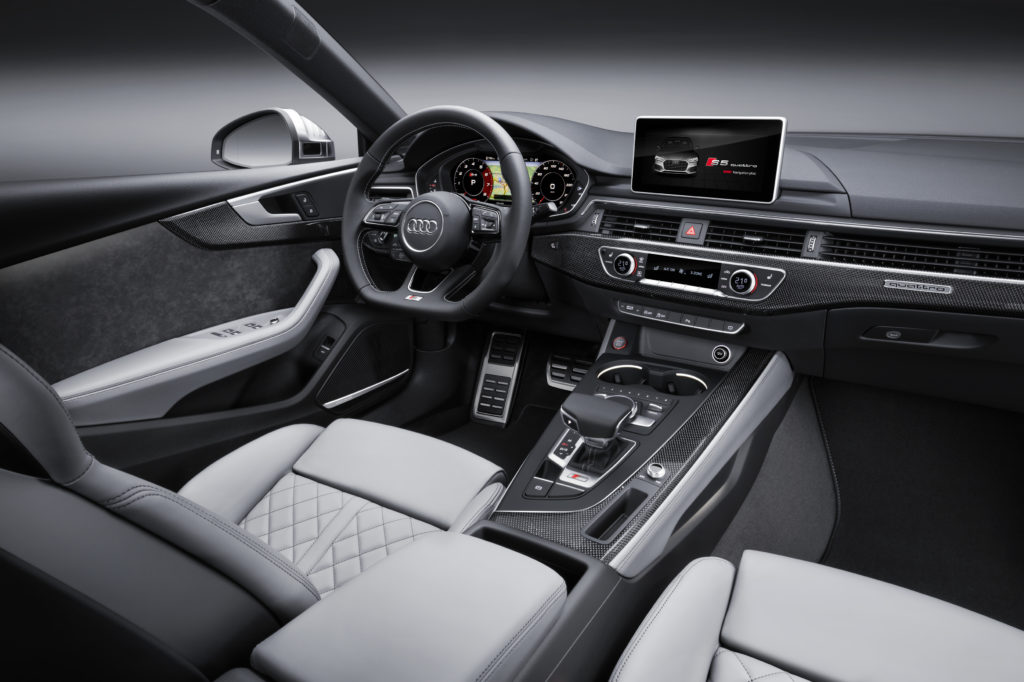 Display and controls
Thanks to the all-new operating and display concept, including free-text search, the driver can control all functions effortlessly and intuitively. As an alternative to the standard-fit analog instrument dials, there is the Audi virtual cockpit. The various display options bring the driver added convenience. The large, high-resolution TFT monitor (12.3 inches) presents richly detailed graphics. The optional head-up display projects all relevant information onto the windscreen as easily comprehensible symbols and digits, thus enabling the driver to keep their eyes on the road.

Infotainment and Audi connect
Audi’s top version is MMI navigation plus with MMI touch. It includes such features as 10 GB of flash storage, a DVD drive, Audi connect services free of charge for three years, up to five free navigation updates and an 8.3-inch monitor with a resolution of 1,024 x 480 pixels. Audi MMI navigation plus works in close cooperation with many of the assistance and safety systems.

The Audi smartphone interface integrates iOS and Android cellphones in an environment specially developed for them in the MMI. The Audi phone box connects smartphones to the on-board antenna to provide superior reception quality. It also charges the smartphone inductively, without any wires, using the Qi standard. The Bang & Olufsen Sound System with innovative 3D sound opens up the spatial dimension of height and gives the driver the sense of sitting in a concert hall. Its amplifier supplies 755 watts of power to 19 loudspeakers. The Audi tablet serves as a flexible Rear Seat Entertainment device, both inside and outside the car.

Playing a central role here is the adaptive cruise control (ACC) Stop&Go system including traffic jam assist. It relieves drivers in slow-moving traffic up to a driving speed of 65 km/h (40.4 mph) by assuming the tasks of braking and accelerating the car, and it also temporarily takes charge of steering it on better roads. The predictive efficiency assistant, which evaluates GPS information from the car’s immediate surroundings, helps to save fuel by giving specific driving advice – a unique feature in this segment.

Collision avoidance assist intervenes if the car needs to drive around an obstacle to avoid an accident. Based on data from the front camera, ACC and radar sensors, it computes a recommended driving line within a fraction of a second. The lineup is rounded out by other assistance systems such as turn assist, park assist, cross traffic assist rear, exit warning, camera-based traffic sign recognition, Audi active lane assist and Audi side assist.

The front axle features redesigned five-link suspension, while a five-link construction replaces the trapezoidal-link rear suspension used previously. The adaptive dampers available optionally are integrated into the standard Audi drive select dynamic handling system. They make for a driving experience that is both dynamic and comfortable. The new electromechanical power steering provides better road feedback and steering precision. Optionally available is dynamic steering, which varies its gear ratio depending on the speed and steering angle.

Engines and drivetrain
Customers can choose between two TFSI and three TDI engine versions for the new Audi A5 Sportback. They produce between 140 kW (190 hp) and 210 kW (286 hp) of power. Compared with the previous model, Audi has reduced their fuel consumption by as much as 22 percent while increasing power output by up to 17 percent.

Six-speed manual transmission, seven-speed S tronic dual-clutch transmission or eight-speed tiptronic – there is tailor-made drivetrain technology available for every engine version. Front-wheel drive is standard, with quattro all-wheel drive available as an option in two versions. It is standard for the 3.0 TDI with 210 kW (286 hp).

The V6 turbo engine accelerates the equally new Audi S5 Sportback from 0 to 100 km/h (62.1 mph) in 4.7 seconds, and on up to an electronically governed top speed of 250 km/h (155.3 mph). It features quattro and the eight-speed tiptronic as standard. In a new departure, the Ingolstadt carmaker now also includes a bivalent A5 Sportback g-tron in its range. Its
2.0 TFSI engine develops 125 kW (170 hp) and can run on Audi e-gas or natural gas, but also on gasoline.

Body and equipment
The body of the new Audi A5 Sportback is the lightest in the segment. An intelligent mix of materials makes it 15 kilograms (33.1 lb) lighter than that of the predecessor. The overall weight of the new generation has fallen by as much as 85 kilograms (187.4 lb) to just 1,470 kilograms (3,240.8 lb), excluding the driver.

Audi offers the model with an upgraded list of standard equipment that includes a wide range of extra functions. The new lines concept with various equipment packages enhances the scope for individual design expression. 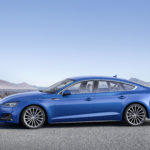 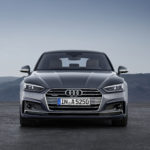 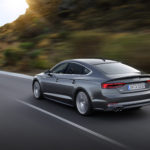 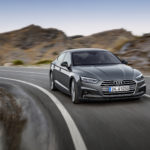 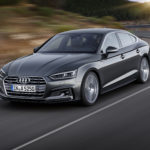 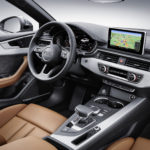 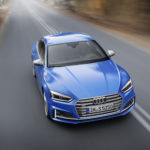 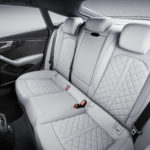 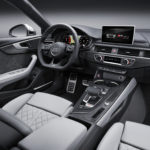 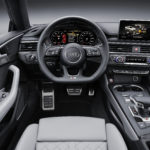 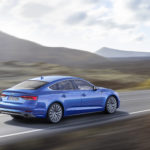 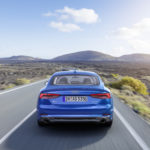