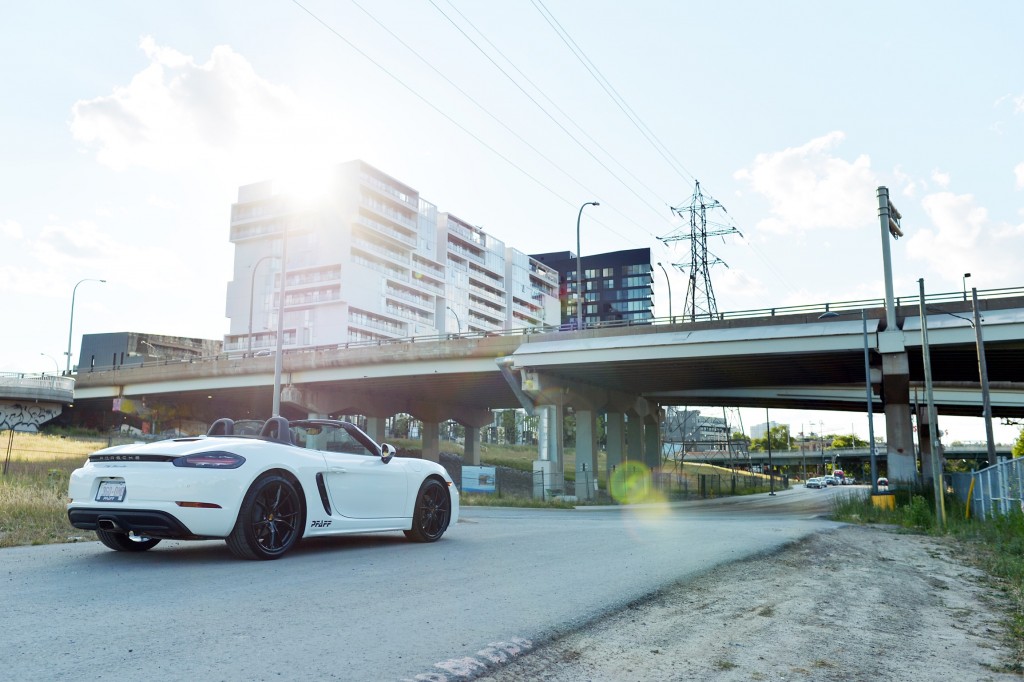 So you drop yourself into the low, low seat, settle in, twist the left-mounted key, and listen.

That’s the sound of Porsche’s future in its mainstream mid-engined sports cars, a throbbing, pulsating turbocharged four-cylinder engine that replaces the 2.7- and 3.4-litre flat-sixes in the previous generation of Boxsters. In a move to improve fuel economy and exhaust emissions while continuing to ramp up performance, Porsche has gone turbo in all of its mainstream cars; the 911 Carrera models received the treatment first earlier this year, and now it’s the Boxster and Cayman’s turn. 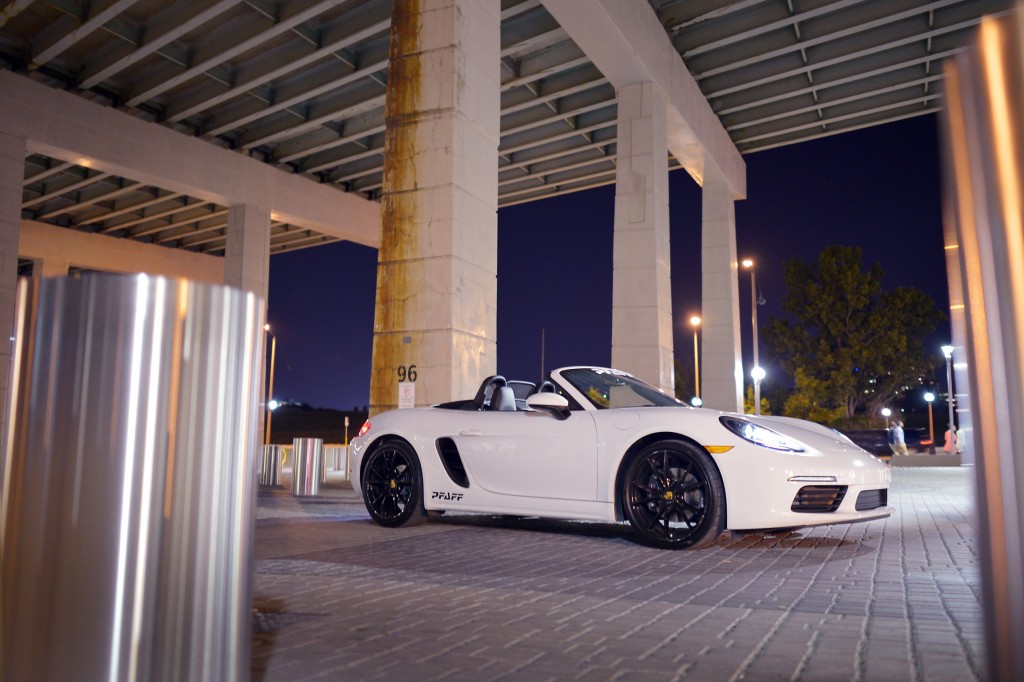 Porsche, of course, is no stranger to turbocharging, or to four-cylinder performance. The first Porsche, after all, featured a horizontally-opposed four-cylinder like these cars, and the 550 Spyder, with its Fuhrmann four-cam was a giant-killing race car in its day. So was the 718, an evolution of the 550 that the new models’ naming directly references. In later years, entry-level Porsches from the 914 to the 924, 944, and 968 all featured four-cylinder power, often with turbocharging, and often with incredible performance from small displacement. 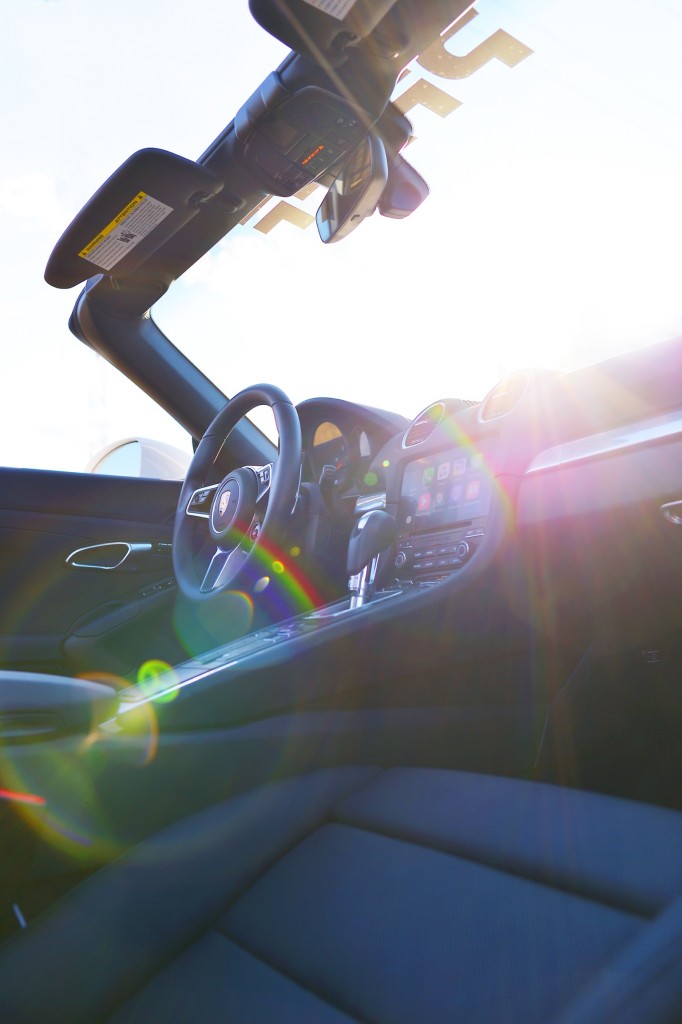 I wasn’t actually worried about the 718 Boxster’s performance. With 300 horsepower on tap in the “base” model starting at just over $60,000, it is more than 100 hp more potent than the original base Boxster, and delivers as much power as the 987 Boxster S in a lighter package with better technology supporting it. When fitted with the PDK transmission, this base model will blitz to 100 km/h in less than 5 seconds, and on to a top speed of 275 km/h. More telling is the torque figure of 280 lb-ft, a huge jump over the previous base Boxster, which delivers added in-gear flexibility and passing power. 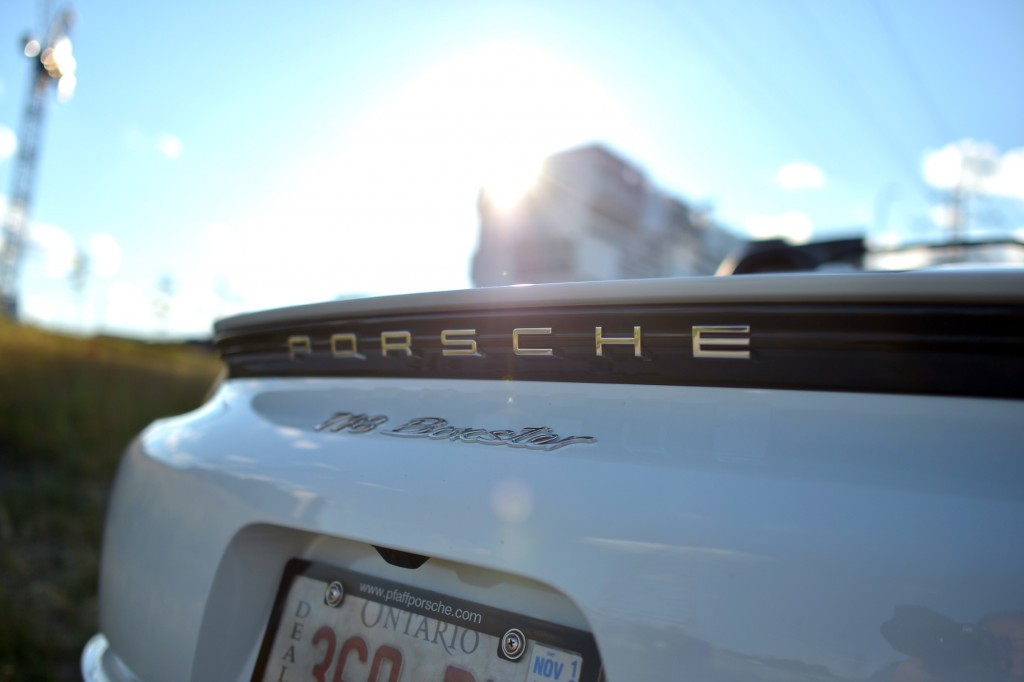 What I was worried about was character. So much of the Boxster’s charisma from day one came from the distinctive, whirring and whining flat-six noises coming from the engine room, and I was worried the 718 would sound and feel generic by comparison. That hasn’t happened. Don’t get me wrong – the flat-four does not sound like a flat-six, or deliver its power in the same refined, climb-up-the-torque-curve sort of way. But it is shot through with character, and it gives the 718 a bully, street-fighter persona that’s very different from the smooth, drive-with-your-fingertips Boxster you might be expecting. 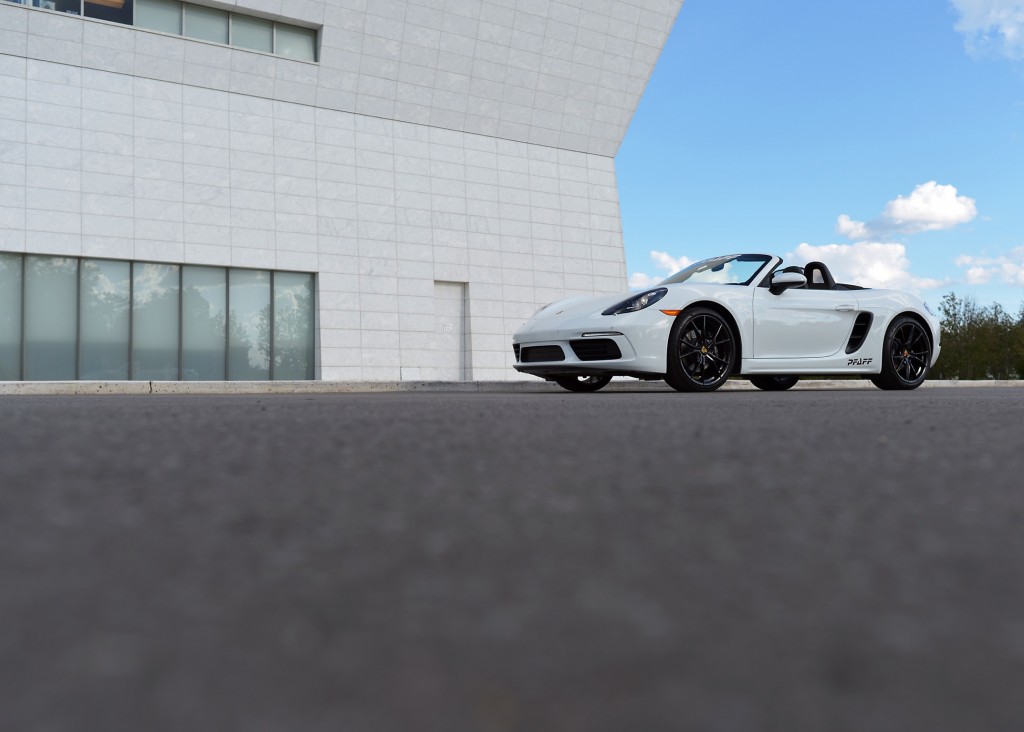 Perhaps this shouldn’t be surprising when you consider the 718 engine’s provenance. The 2.0-litre turbocharged flat-four is actually related to the turbocharged four-cylinder in the two-times Le Mans-winning 919 Hybrid race car, and shares its bore spacing, engineering principles, and the design of some internal pieces. (The 919 was originally going to be a flat-four as well, with its lower centre of gravity, but the narrower V4 configuration was chosen to allow tighter bodywork, not something that’s an issue on the 718.)

If you’re used to the way the old flat-sixes used to deliver their power in a smooth, rev-building rush, the sledgehammer punch of the 718’s engine may catch you by surprise. Particularly in Sport and Sport Plus modes, there’s zero waiting for the torque to build, the shove into your seat is immediate, and the speed – even in what is supposed to be a “base” car – is pretty incredible. In the first few drives, as you play with the different drive modes and the transmission, it can feel a little bit featureless, sort of an on-off switch for speed, but with time you acclimatize to the turbo and the way it gives you so many more options – from which gear you can be in at any given speed, to how many cars you want to pass to what sort of noises you want to play from the single exhaust. 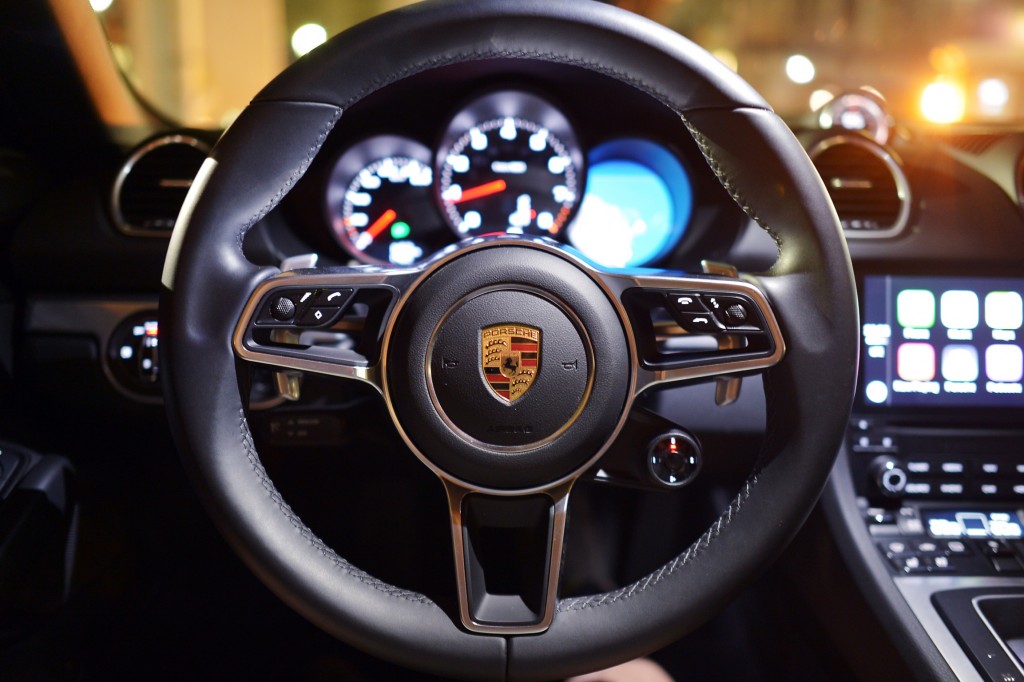 With no optional sport exhaust to hide itself behind, my demo’s flat-four played plenty of characterful tunes, but they are very different tunes than what you may expect. At low revs, the new engine rumbles, it pops aggressively on upshifts in Sport mode, and a throbbing roar has replaced the higher-pitched buzz-saw sounds of the old six. Interestingly, while Sport mode opens up a flap in the exhaust to deliver more noise (with more rumbling and back-popping at part throttle), it actually quiets down in Sport Plus, where the noise is really, really nice.

Like most modern sports cars, the 718 is sensitive to the setup that you choose through its various electronic controls. The white car you see in the photos doesn’t have the optional, adjustable PASM suspension or the 20mm lower sport setup, and it doesn’t need it. Even with the optional steamroller 20-inch wheels and Pirelli P Zero tires, it rides beautifully on the highway and on rutted city streets, and the handling is better than ever. Twist your wrists and the nose dives exactly to where you’re pointing, steering feel is terrific, and cornering grip is unreal. All this, and the extra torque from the turbocharged engine makes it easier to manipulate the car’s attitude in corners. 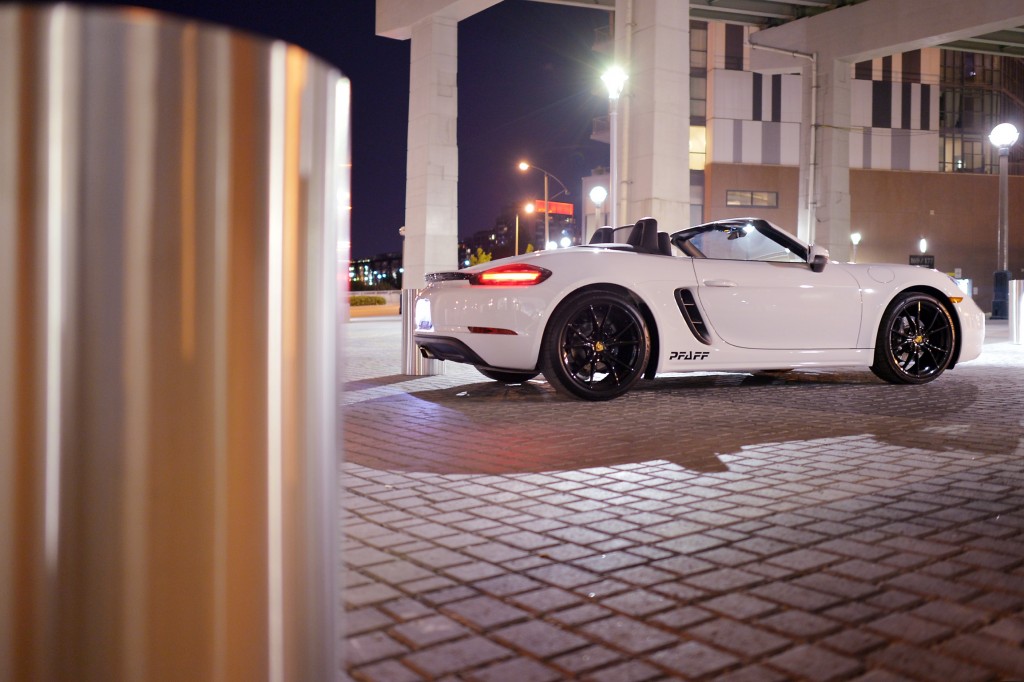 Interestingly, around town, I ended up driving the car in the most aggressive Sport Plus setting, with the PDK gearbox in manual mode, shifting with the paddles on the new, smaller steering wheel or with the reconfigured console shifter (push forward to downshift, pull back to upshift). It feels most natural that way, with ultra-crisp throttle response, super-quick gear changes, and just the right amount of noise. Dial it back to normal mode, and you discover the four-cylinider engine is actually incredibly smooth, refined, and docile, and the PDK does a great impression of a smooth-shifting automatic gearbox: great for sitting in traffic, if a little less fun. 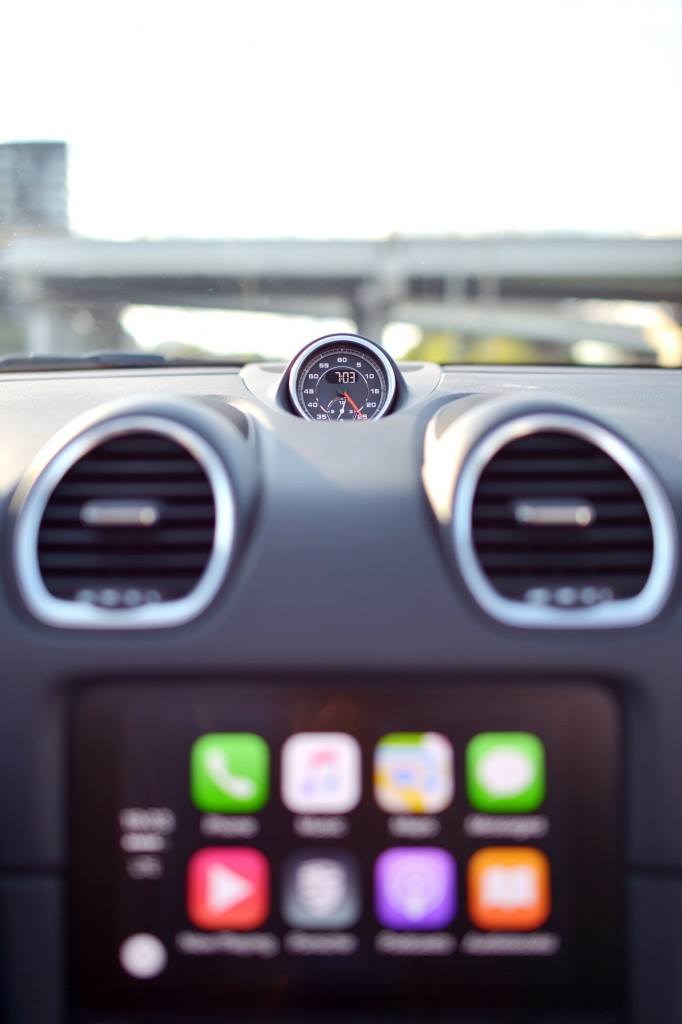 That duality of purpose and delivery pretty much describes the rest of the 718 as well. You can drive it every day, and it’s a comfortable, practical companion with two trunks, a spacious, comfortable interior, and impressive refinement. (The addition of Apple CarPlay to the updated infotainment system significantly increases this base Porsche’s entry-level usability, and makes browsing your music and phone contacts a cinch with the big touchscreen.) But push a few buttons, find the open road, and you unleash a full-blooded Porsche sports car. One that – surprisingly, given the reduction in cylinder count – feels even more like a race car than ever before.

The 718 Boxster has arrived at Pfaff Porsche. Test drive one today. 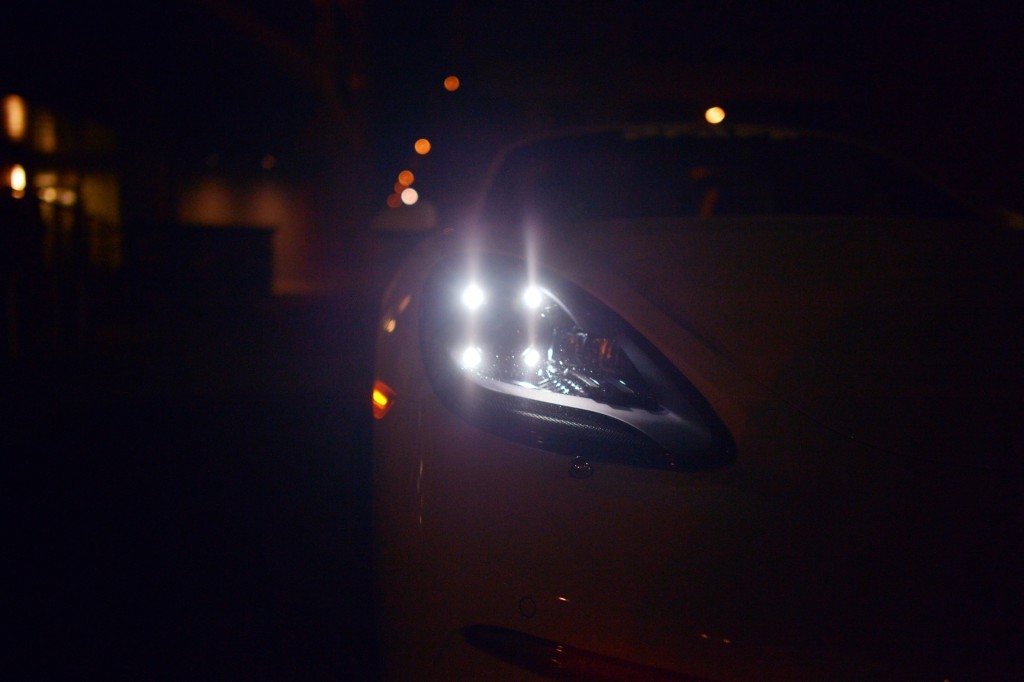