Pfaff Motorsports’ first race weekend of the year wrapped with two podiums in the Canadian Porsche series’ Silver class for Gerald Panneton, and an inaugural win for Chris Green in his first Pirelli World Challenge event. Sunday’s racing saw warm, sunny conditions for the Porsche Cup race in the morning, while light rain threatened the start of the afternoon’s Pirelli event, without ever becoming a major factor.

Gerald Panneton, driving the #57 Porsche Cayman GT4 Clubsport, started second in the Silver class on Sunday, on just the second race of his Porsche Cup career. He drove a steady race and finished second, making for his second podium of the weekend in the series.

“I always knew this season was going to be a learning curve,” he said. “This is a new car, not just for me, but for the series. We didn’t make any setup changes from yesterday, but I’m still slowly building my confidence in its abilities. The car moves around a lot, and it will take time to build trust in the car to push it to its limits.” 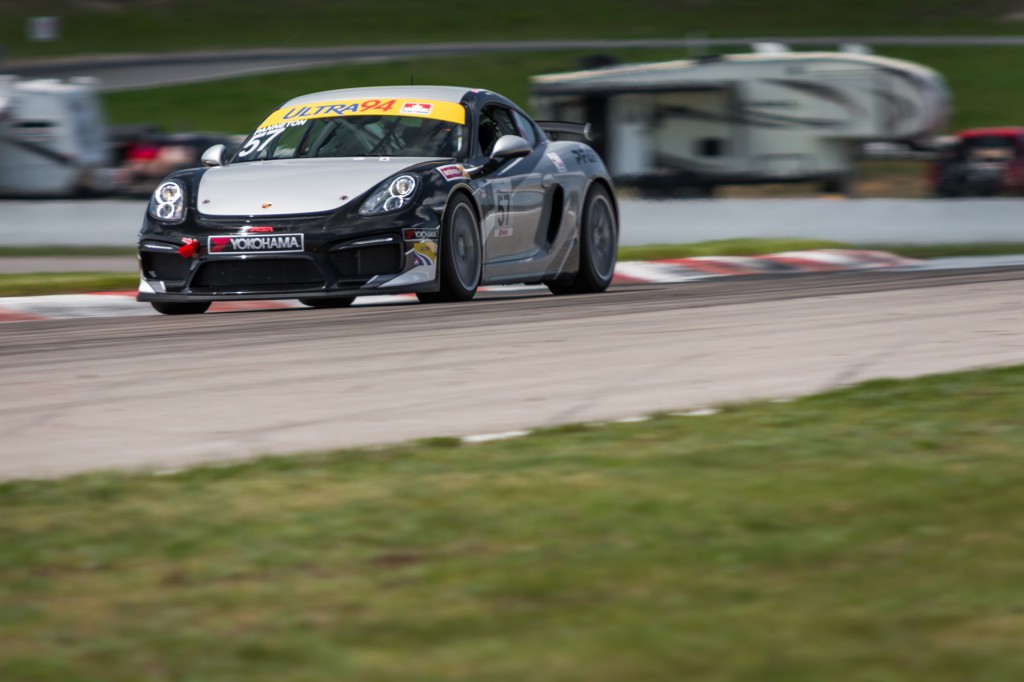 Orey Fidani started seventh in the Platinum class and got a terrific start in race two of the weekend, jumping past Tim Sanderson into sixth. At the front of the field, the first two starters, Scott Hargrove and Daniel Morad, had a coming-together in turn three, creating a bit of mayhem as the other Platinum drivers tried to avoid the incident. Fidani, who last season pulled off an incredible accident-avoidance move on the same track, passed the incident unscathed and slotted back into place, and held off a hard-charging Sanderson for seven or eight laps before Sanderson passed him coming out of turn 10. He later hit a piece of debris on the track and spun between turn four and five, and was passed by the reminder of the Platinum and Gold cars in the field. 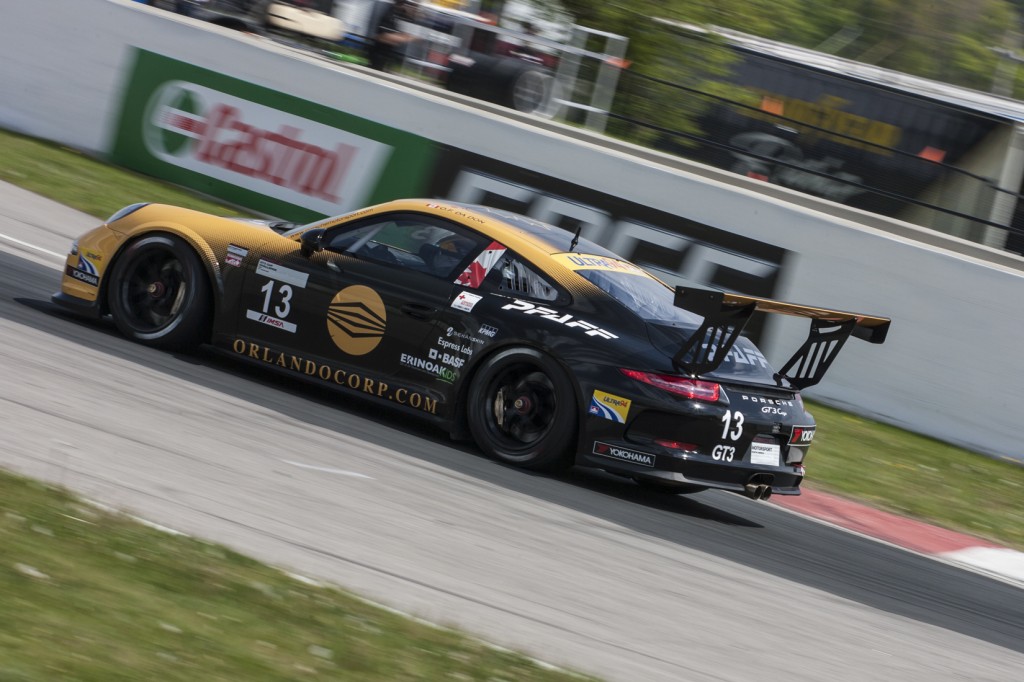 Fortunately, Fidani recovered from the spin without any damage to his car and rejoined the race, pushing hard and working his way past the Gold cars and Valerie Chiasson’s Platinum car to land himself in sixth place.

“My #13 Orlando/Pfaff Motorsports car was amazing today,” he said. “And it was a fun race. But I definitely still have more work to do in corners one, eight, and a little bit in three. There’s still more speed to be found from this car and I’m excited about the next weekend.”

After suffering a blowout that put him off the podium in race one, Chris Green started the second Pirelli World Challenge race of the weekend in first, as he set the fastest race lap in race one. He led the class from start to finish, pulling out a substantial lead over second-place Alec Udell and third-place Sloan Urry.

“I couldn’t be happier with the #9 Castrol/Pfaff Motorsports 911 GT3 Cup,” Green, who also won the race’s Hard Charger award, said. “I think it’s truly the best it’s been all year, and the Pirelli P Zero race tires performed flawlessly through the 50-minute race. As with race one, managing the relationship with the faster-moving GT-class cars was a challenge, but the drivers in the World Challenge series are great.” 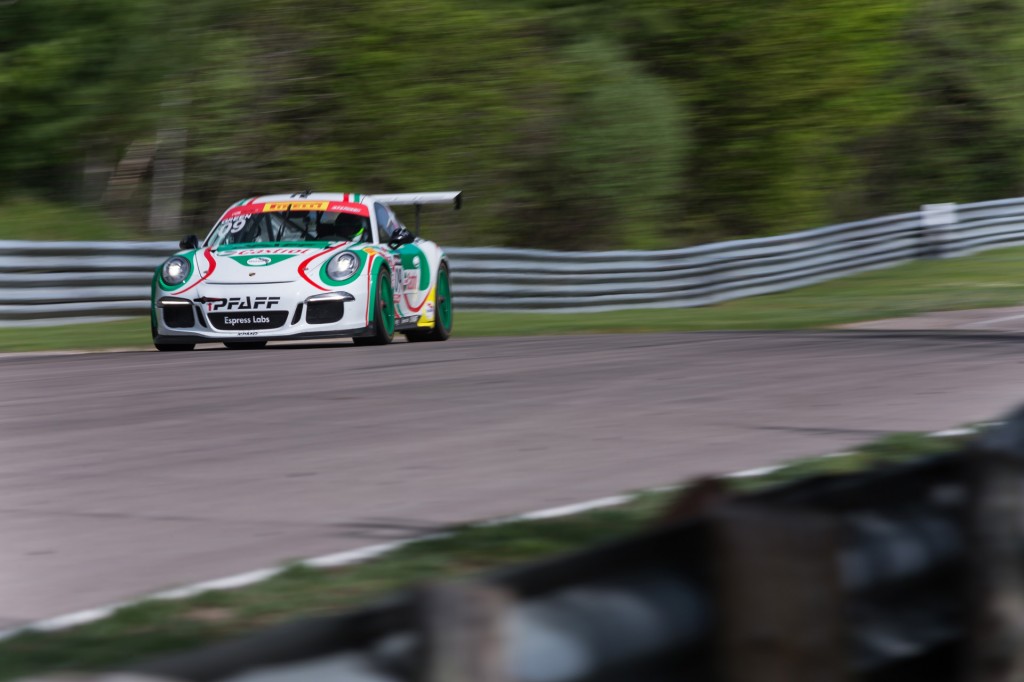 Green also set the fastest lap of his class at 1:20.700 and finished ahead of Udell with a 11.44 second gap. Kyle Marcelli, sponsored by Pfaff and driving an Audi R8 LMS in the GT class, finished fourth, with the McLaren Toronto-sponsored McLaren 650S cars of Alvaro Parente and Austin Cindric finished sixth and seventh.

The next race weekend of the year takes Orey Fidani and Chris Green to Montreal, where the two drivers will compete in the Porsche GT3 Cup Challenge in front of a huge crowd as a support race for the Formula One Montreal Grand Prix weekend, from June 10-12, 2016. You can follow live timing at scoring.imsa.com, or follow our twitter feed at @pfaff_auto.