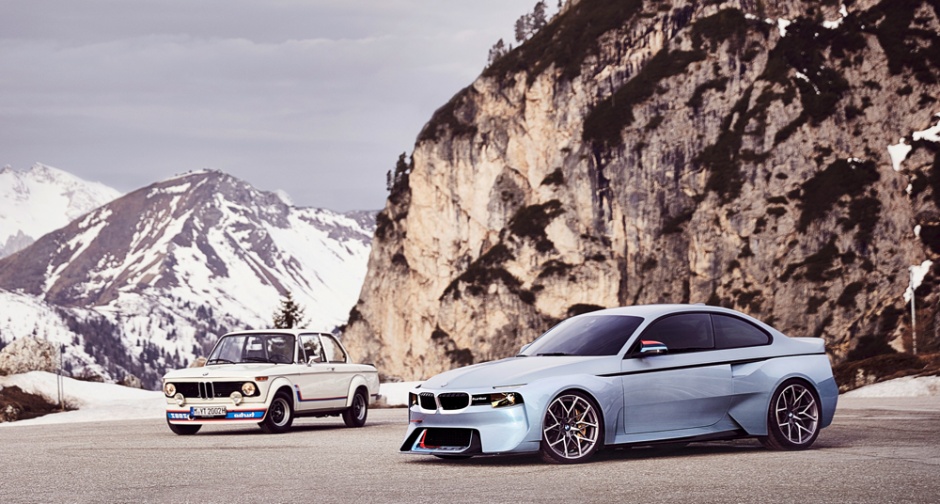 BMW has created a very special car for this year’s Concorso d’Eleganza Villa d’Este to pay tribute to one of the most significant models in its history. The BMW 2002 Hommage celebrates the extraordinary feats of engineering behind the BMW 2002 turbo – and re-imagines them as a design study for our times.

The eye-catching design of the BMW 2002 Hommage employs a very dynamic, striking use of forms for its own take on what is, for me, one of the most iconic vehicles in BMW history. At the same time, it encapsulates BMW’s major motor sport triumphs, which were made possible by turbo technology.

The sporting silhouette of the BMW 2002 Hommage lies low against the road. Its compact proportions, complete with long wheelbase, short overhangs and prominent “shark nose,” promise a driving experience that thrills with irresistible dynamics and agility. Aerodynamic details like the large spoilers at the front and rear team up with the profusion of air intakes to optimise airflow around the car and maximise downforce in every driving situation. 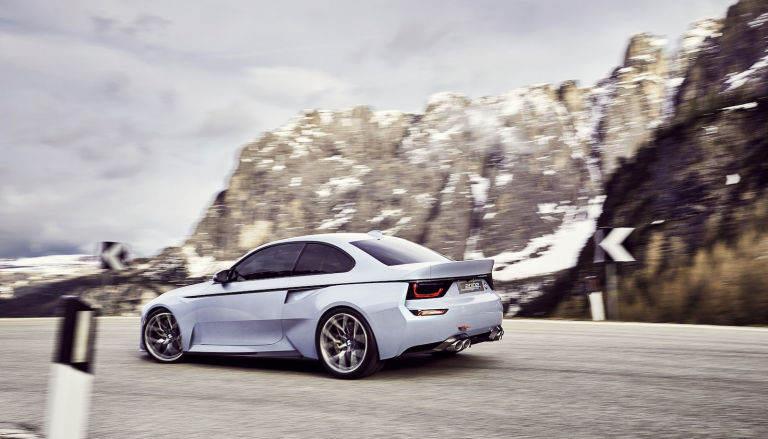 Inspired by the signature chrome strip that ringed the 2002 in its day, a horizontal carbon band wraps itself around the shoulderline of the BMW 2002 Hommage and splits the body visually into separate sections. The upper tranche of roof, bonnet and boot lid has matt paintwork to prevent reflection of the sun’s rays – in a reference to racing cars of yore. The body’s lines here are minimalist, clearly drawn and flowing in nature.

The lower section creates a definite contrast, with its high-gloss paintwork, very bold, sculptural surfaces, and distinctive lines that infuse the flanks with a contemporary flavour and draw the eye to the driven rear wheels. The Space Race Metal paintwork drapes itself over the BMW 2002 Hommage like liquid metal. In both its matt and gloss form, the light metallic blue finish changes in appearance from a brightly fluorescent blue to grey, depending on the incidence of light, and lends the surfacing a dynamic sense of depth. As a result, the car’s whole body brims with power and energy. 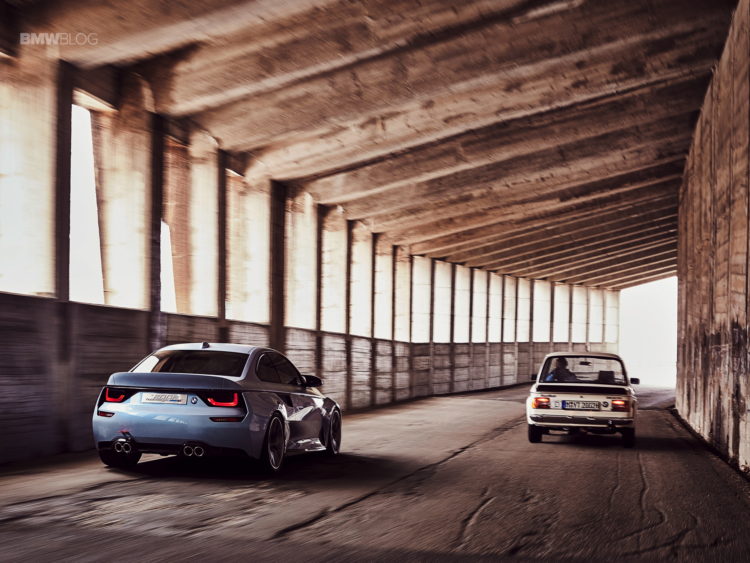 A striking feature of the car’s flanks are the wheel arches, which frame the body like four brackets. In the process, they recall the homologated version of the BMW 2002 turbo, which needed broad extensions bolted onto its body to accommodate a significantly wider track. The Hommage car integrates this detail neatly into flanks designed with clear dedication to the job at hand. Slick surfacing and precisely chiselled lines envelop the powerful wheel arches and hand them a starring role. 20-inch light-alloy wheels in bi-colour design round off the styling as the car meets the road. The modern looks of these lavishly milled, multi-spoke items recall the racing rims of bygone eras, while gold-coloured brake callipers bearing the M logo add an extra stamp of class.

The rear-end design of the BMW 2002 Hommage also calls on elements of the 2002 turbo. The horizontal sub-division of the car’s generous surfaces and its clear lines make a width-emphasising and thus suitably dynamic statement, laced with modern feel. The form of the rear lights is inspired by the same historical blueprint. The almost rectangular lights provide a stylistic border for the rear end. The glass covers have a contemporary black-panel look and only offer a view of the inner workings when the lights illuminate. All you can see when they are dormant is an unbroken black surface. As at the front of the car, this strengthens the impression of a strip wrapped around the car.

The BMW logo to the right of the license plate between the two rear lights is likewise a characteristic element of 2002 rear styling. The muscular wheel arches bookend the rear section and accentuate the wide track, while precise spoiler lips bring a modern edge to the car’s detailing. A carbon diffuser integrates the now familiar two sets of twin exhaust tailpipes and wraps up the rear styling with a sporting flourish.

BMW’s fresh interpretation of the BMW 2002 rolls on the running gear of the new M2, but it adopts the form of a compact sports coupe in the classical tradition of BMW Hommage cars. But more than that, the BMW 2002 Hommage represents a clear statement of how pure driving pleasure is defined in 2016.