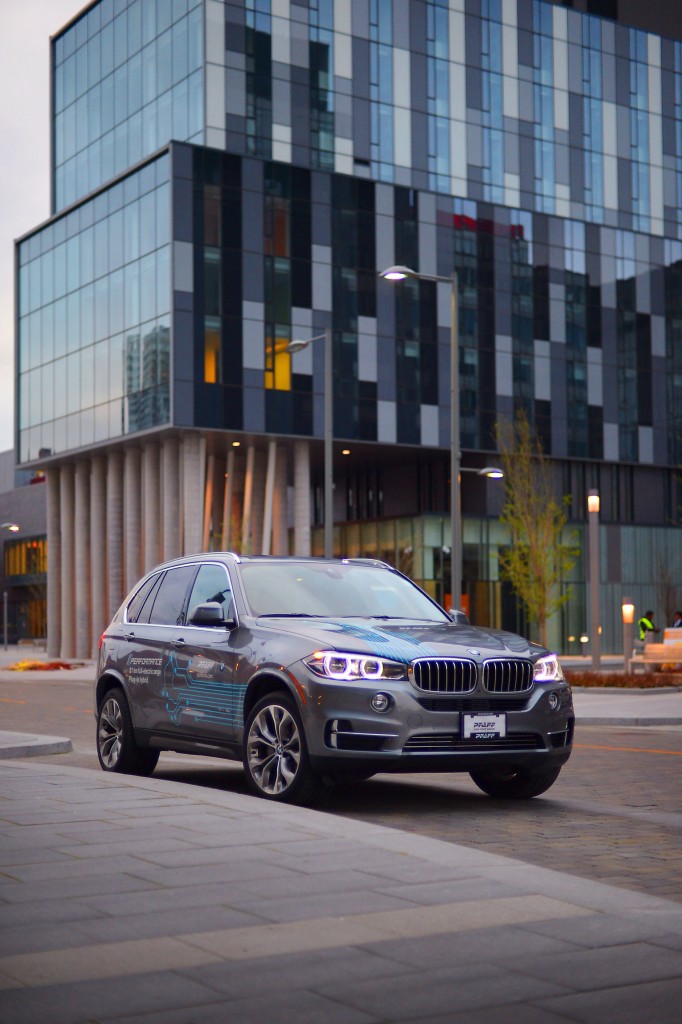 It feels a little weird, to be honest, driving around in a BMW that not only doesn’t make sweet straight-six noises rolling through town, but no noise at all, save for the quiet rustle of the tires against pavement and a faint hum from the drivetrain. The X5 xDrive 40e is the first model in the company’s “iPerformance” lineup, which will also include a 330 eDrive and a 740 eDrive. The new lineup incorporates lessons learned from the company’s full-on electric-focused i models into more mainstream body styles, thus bringing plug-in hybrid technology to an even larger audience. 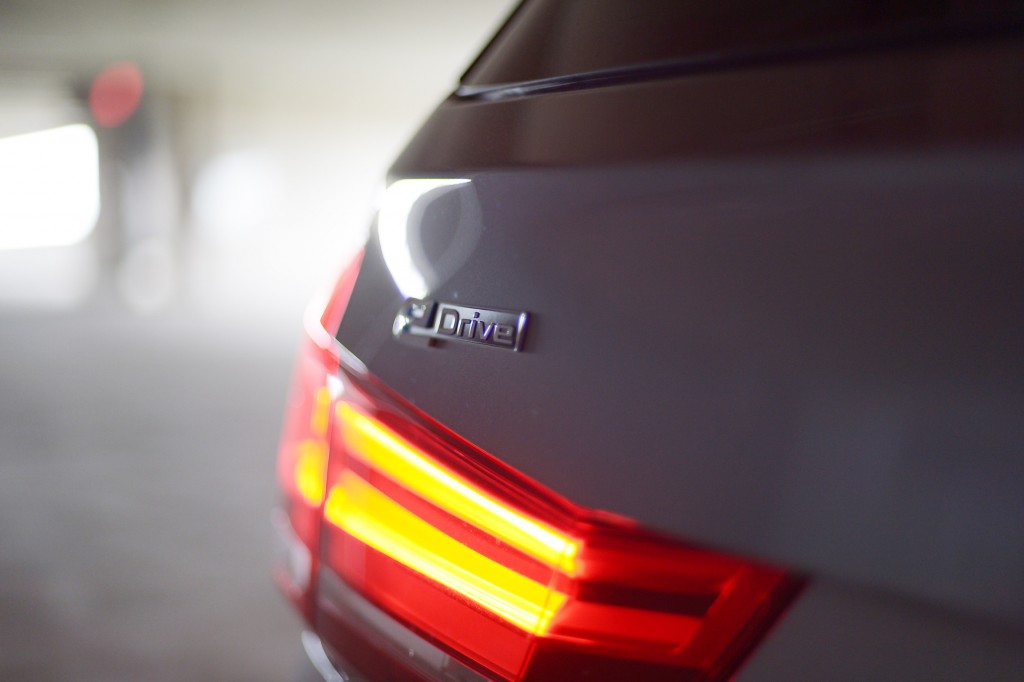 The X5 40e (let’s call it that for short) incorporates BMW’s familiar 2.0-litre turbocharged four-cylinder engine with a powerful electric motor and lithium-ion battery to deliver a total of 308 horsepower and 332 lb-ft of torque. But what’s more impressive than the power output, which is roughly on par with the X5 35i, is the silent, seamless way it delivers its power. In comfort mode, you start in electric-only mode, yet the big SUV pulls away strongly from a standstill on a wave of instant torque; push your foot down harder and the gasoline engine eases in, carrying you smoothly and quietly up to highway speeds with ease, despite the 150-kg weight penalty imposed by the batteries and their associated control units. 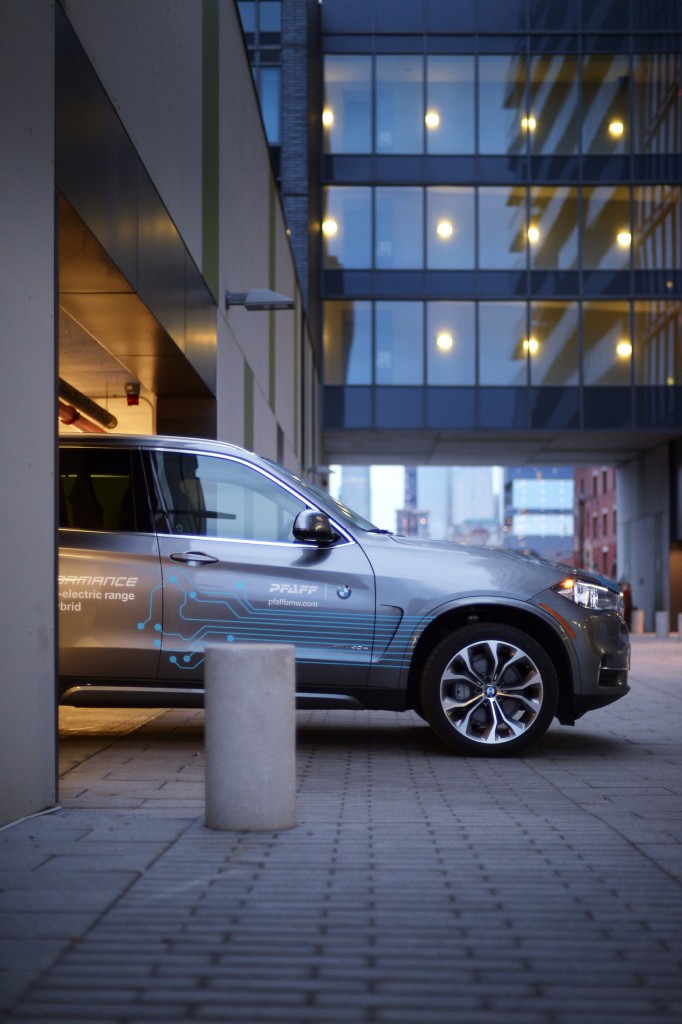 Use the driving dynamics selector by the shifter to choose sport mode, and the logic is reversed: while the start-stop system remains active in all driving modes, shutting the engine off when you’re at a standstill, in sport, standing starts begin with the gasoline engine, and the electric motor cuts in to deliver an extra power boost, almost like a second level of turbocharging. Driven like this, the X5 40e is more exciting than you might expect of a spacious, five-seat SUV: its 0-100 km/h time of under seven seconds doesn’t do justice to the instantaneous electric torque boost that lofts the X5 40e effortlessly past slower-moving freeway traffic, and makes city driving a cinch, thanks to its impressive point-and-squirt capability. 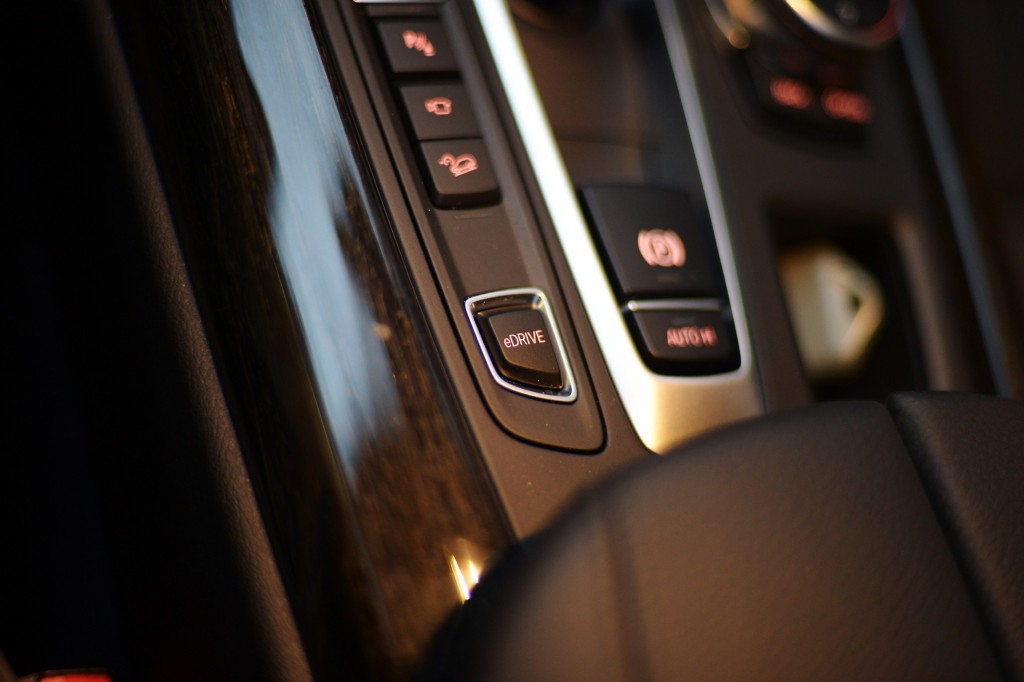 Being a BMW, the plug-in X5 also handles, and comes with what must be the most aggressive standard wheel-and-tire setup of any hybrid SUV on the market: a staggered (and staggering) set of 20-inch Dunlop Sport Maxx tires that give it sports-car like grip well past the limits of reasonable road driving and which give it immediate turn-in response and incredible cornering stability, no matter what speed you’re going. Power assistance, for me, was just right for the big three-spoke steering wheel, though some drivers might find the helm a bit too heavy; the tradeoff is incredible precision and excellent feel, no matter which driving mode you’re in. 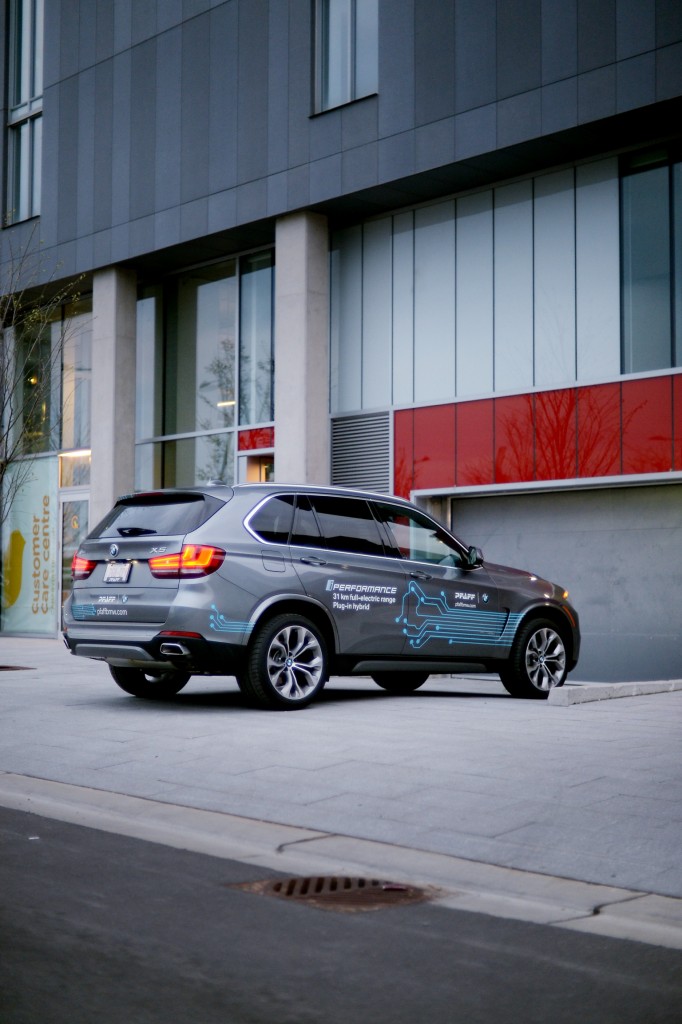 The driving fun that the X5 40e delivers is, at times, a little bit at odds with other parts of its personality. Driving enthusiasts will love its power and handling, but will likely be disappointed by its lack of aural encouragement from the engine compartment. Those who love its silent running in the city might find its aggressive wheel/tire setup a bit much over cobbled downtown streets. Enthusiasts will resent the intrusion of safety systems like automatic pre-collision braking (which automatically brakes and sounds an alarm when the car estimates your closing speed is too high), lane departure warning (which vibrates the steering wheel when you stray to the edge of your lane), and blind-spot warning; urbanites will likely love them, and will especially love the 360-degree camera system which shows an above-car view of just how close they are to the nearest curb. 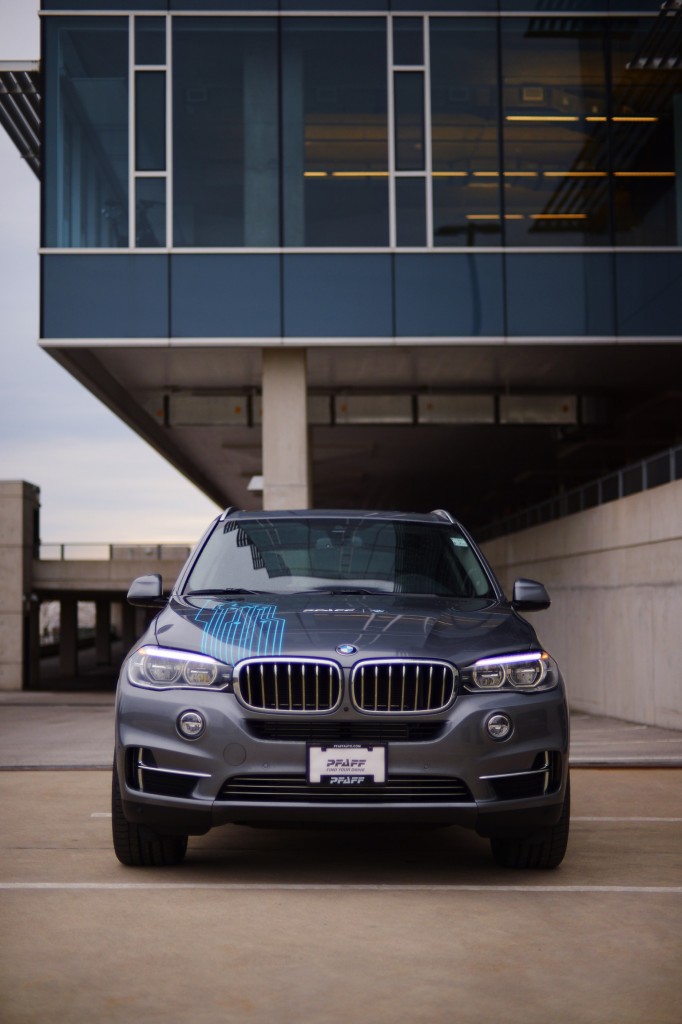 Both camps will likely have questions about where the plug-in drivetrain can be charged outside of home (where you’ll install the standard-equipment BMW charger). Several apps are now available to help locate public charging stations, all of which are compatible with the plug on the X5’s front-left fender, but they’re definitely easier to find in built-up urban areas. 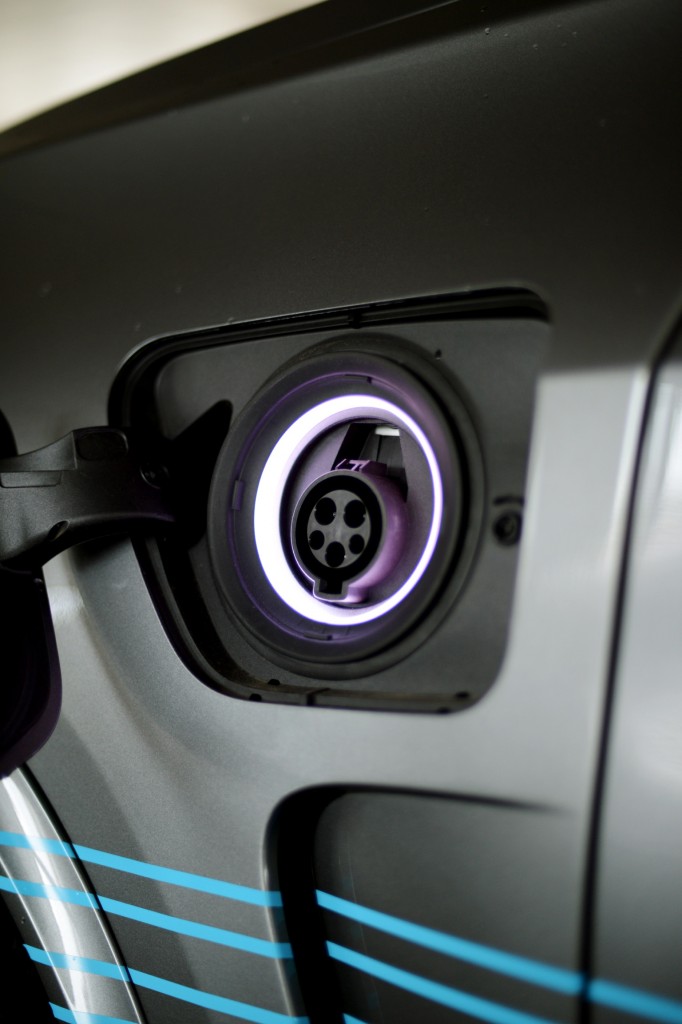 Not to worry, however: even if you never plug in the 40e, it will regenerate is battery effectively under braking and deceleration (one of the reasons brake-pedal feel isn’t quite as reassuring as in other BMW models, as the system juggles how much braking power comes from using the electric motor as a generator, and how much braking actually comes from the brakes). If work and home are about 30 km away from each other, and have charging points, you could go forever without using any fuel, and still have the gasoline engine in reserve for longer trips; if your commute is longer, you’ll just experience impressive fuel economy for a large SUV, combined with silent, vibration-free running a surprising amount of the time. The green plates you get with its registration also mean you’ll get a $3,000 rebate from the government, and will be able to access the HOV (high-occupancy vehicle) lanes on 400-series highways around the GTA, even when alone. 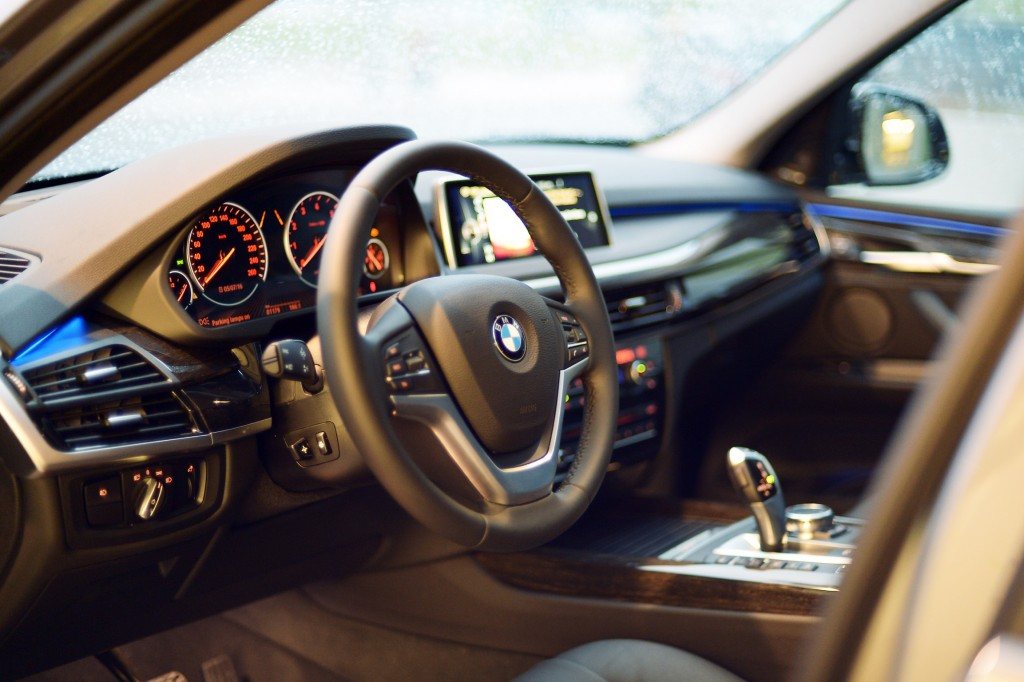 Given all of the technology at work in the drivetrain, as well as the impressive dynamics, it came as a surprise to me that the most impressive aspect of the X5 40e was its interior – something it shares with the latest generation of X5, which I hadn’t spent any time in until now. Cabin quality is simply among the best in the business, easily on par with Audi’s latest efforts in terms of fit-and-finish, quality of materials, and perhaps most surprisingly and delightfully, creativity in the use of targeted ambient light. 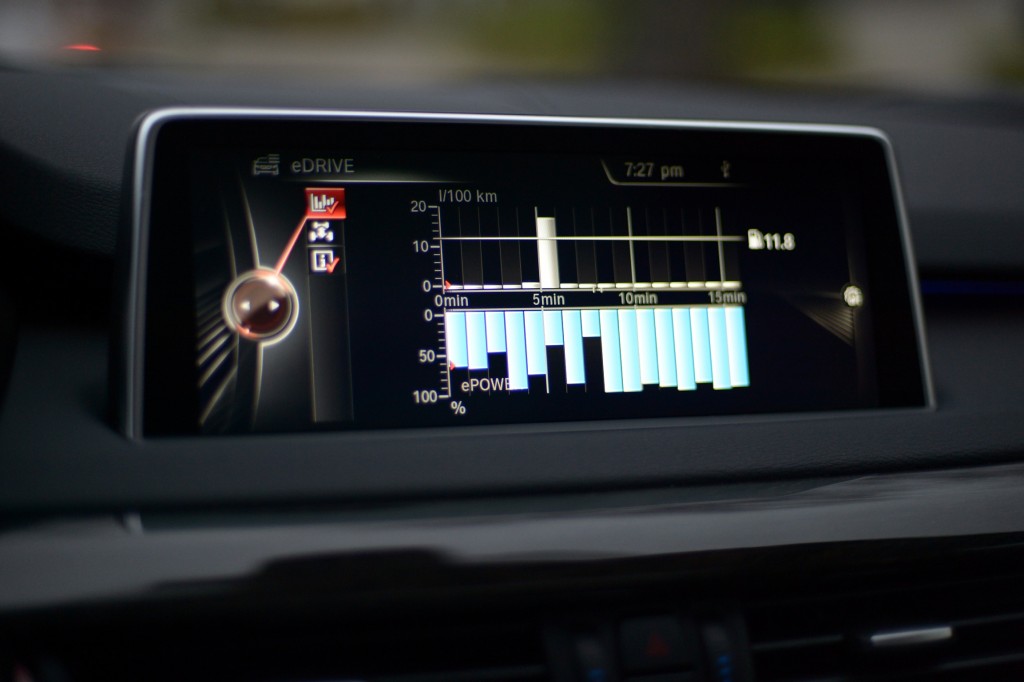 The X5’s power-everything seats, high feature count, and killer audio system are a given in this price class ($74,000 to start for the 40e, with an additional $6,500 for my tester’s premium package and $2,500 for adaptive LED headlights). What comes as a surprise is how beautifully it all comes together, from the combination of fine-line ash wood and piano-black lacquer trim, the adjustable ambient lighting strips, the clarity of the wide-screen iDrive infotainment system, and the pin-sharp instruments. BMW has really stepped up its interior game with its latest new models, and while their style and logic is very different from Audi’s, it’s equally well-executed. 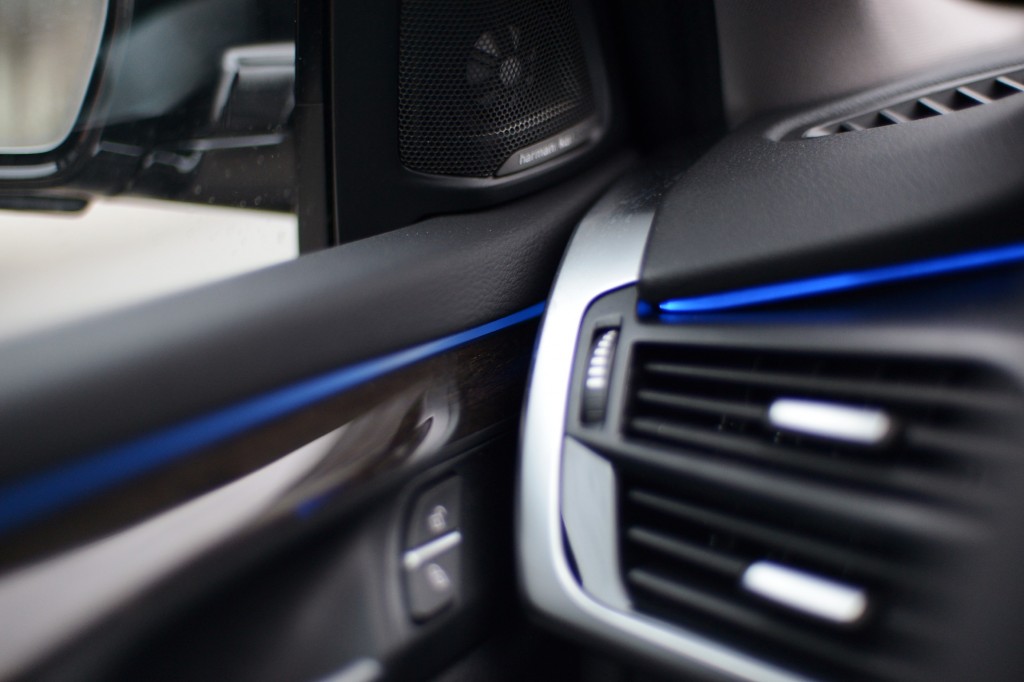 As the first iPerformance vehicle, the X5 40e’s remit is one of the broadest, and most complicated, in the BMW lineup, and maybe it isn’t a surprise that, with so many different targets to hit, it can sometimes feel like there are several different, and contradictory, cars living within its sleek wrapper. Like most modern BMWs, and most modern cars, getting the best of it requires delving into a lot of different menus and playing with a lot of different options before you figure out what setting is right for you. Once you’ve done that, though, it is an impressively complete and thoroughly-executed package, one that matches the sophistication of vehicles like the Porsche Cayenne S E-Hybrid, and one that is one big step along the way to an increasingly-electrified future. 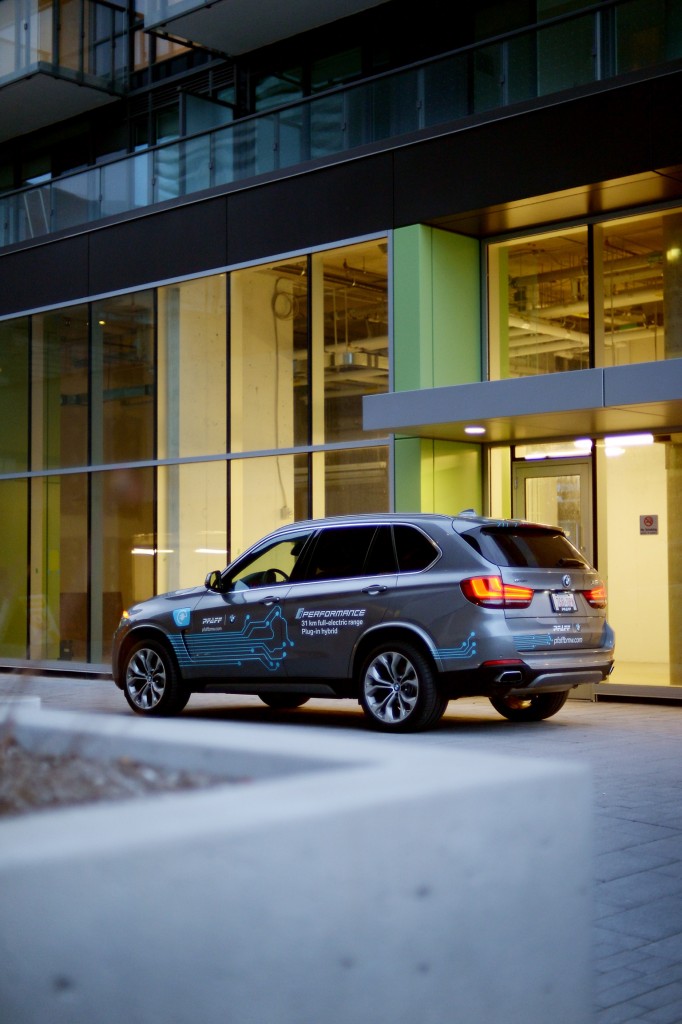