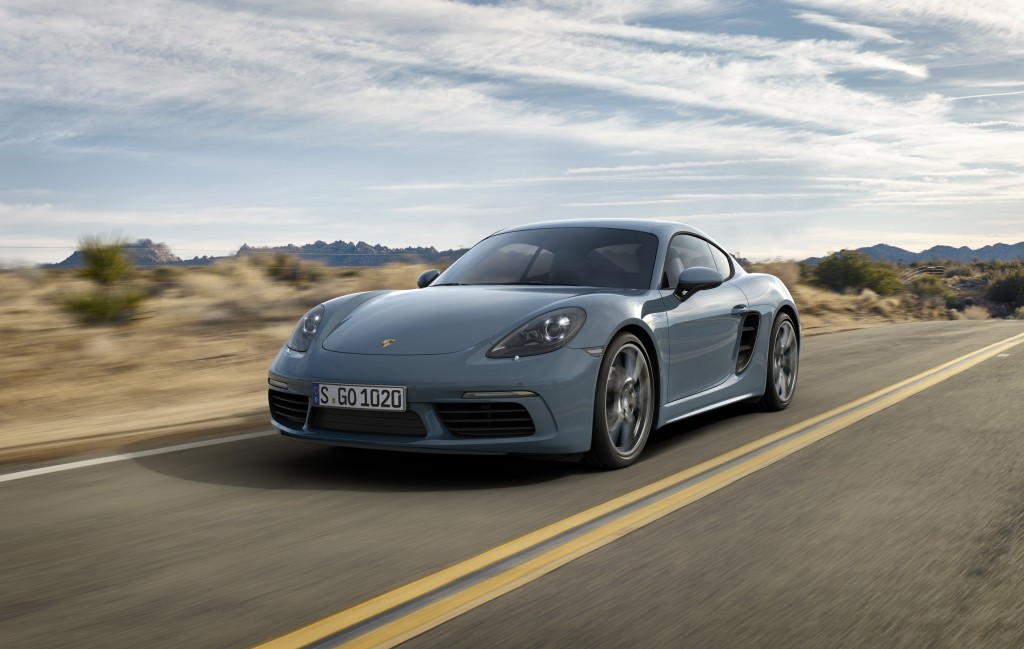 The next-generation Porsche Cayman is being remade in the image of its open-top 718 relative, with a more striking, athletic appearance and even more performance and efficiency. For the first time, the hard-top 718 will be is priced below the roadster (though Canadian specific MSRP has yet to be determined). 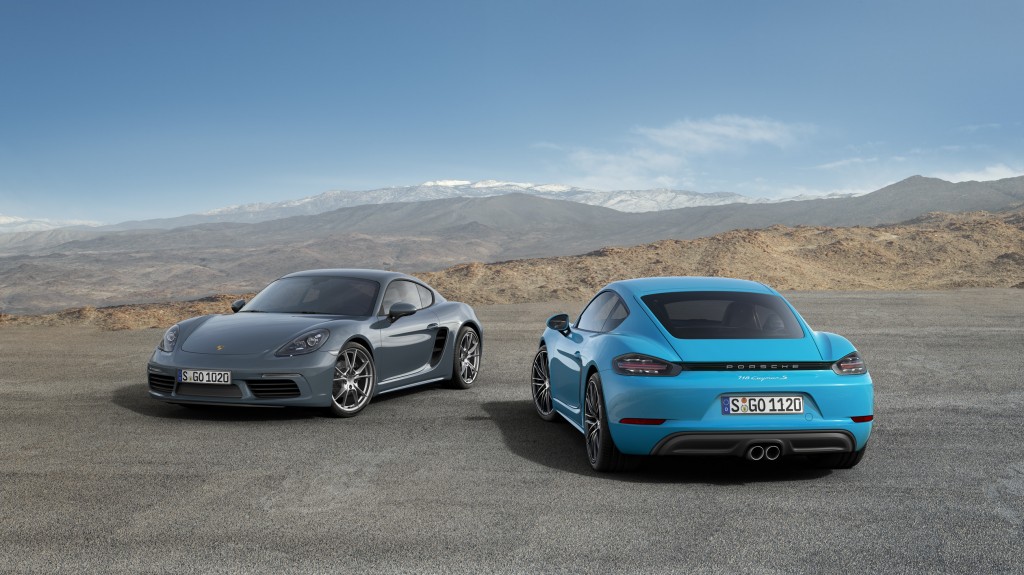 New turbocharged four-cylinder horizontally-opposed engines, as in the 718 Boxster, are deployed in the 718 Cayman, and the coupe and roadster have identical power outputs for the first time. The “base” version starts with 300 hp from 2.0 L of displacement, while the S model delivers 350 hp with a displacement of 2.5 L. This represents a 25 hp power jump compared to their predecessors, with even better economy. 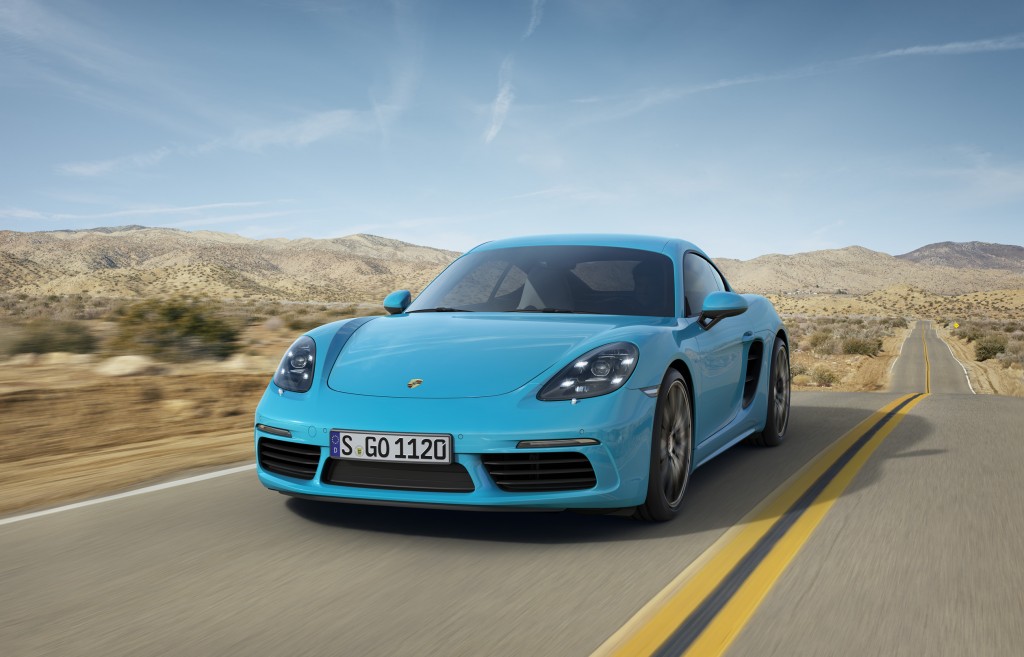 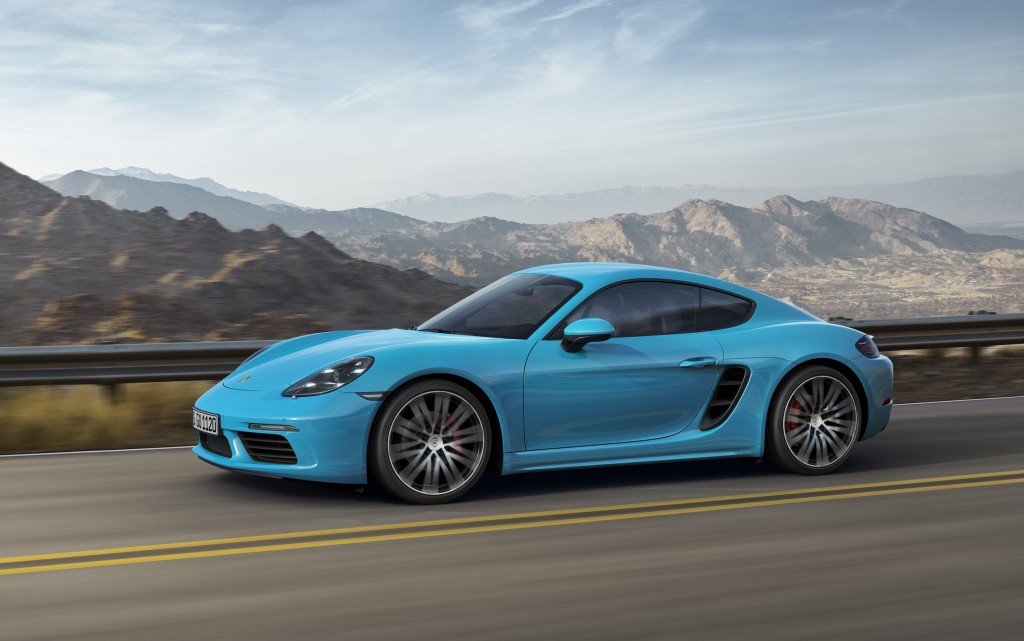 In terms of their driving dynamics, the new 718 Cayman models follow in the tracks of the classic 718 cars. Thanks to their outstanding agility, the historic mid-engine sports cars won numerous races in the 1950s and 1960s such as the Targa Florio and Le Mans. Lateral rigidity and wheel tracking have been improved in the completely retuned chassis of the 718 Cayman; springs and stabilisers have been designed to be firmer and the tuning of the shock absorbers has been revised. The steering, which has been configured to be 10 per cent more direct, enhances agility and driving fun. The rear wheels, which are one-half of an inch wider, in combination with the redeveloped tyres result in an increased lateral force potential and hence in greater cornering stability. 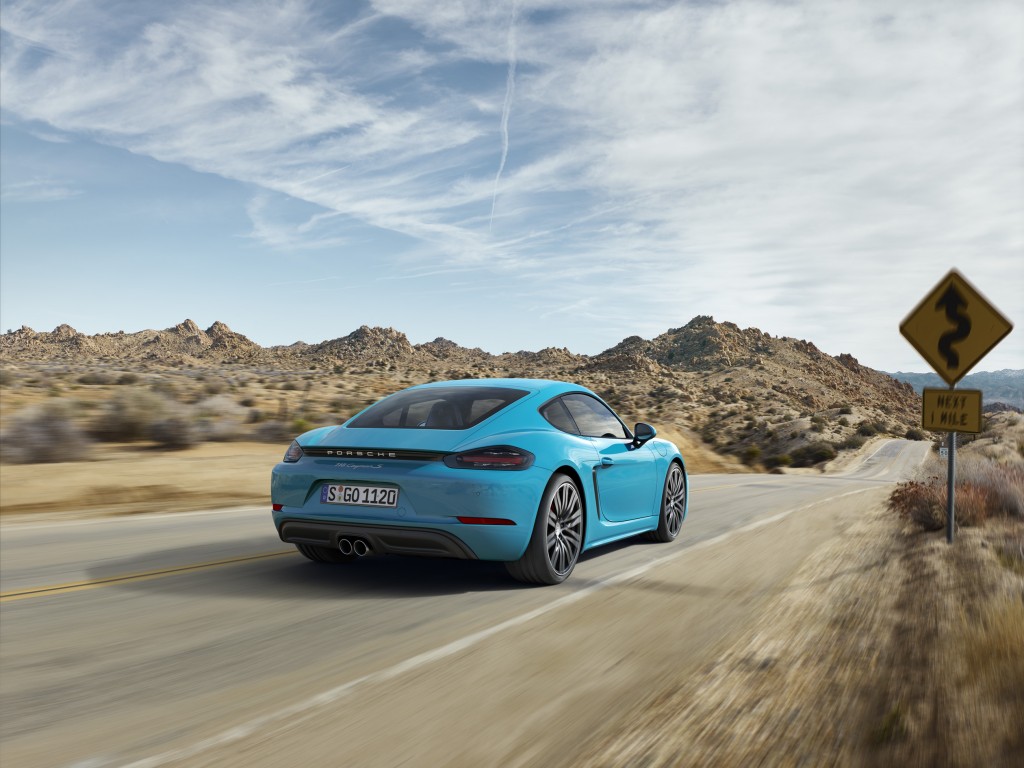 Driving dynamics options such as the Sport Chrono Package and Porsche Torque Vectoring (PTV) allow the sporty character of the 718 Cayman to be further customized. PASM with a 10-mm lower ride height and, in the S model, PASM sport suspension with a 20-mm lowering, are also available. The Sport Chrono Package can be adjusted via the map switch on the steering wheel. Supplementing the previous settings of “Normal”, “Sport” and “Sport Plus” is the “Individual” program, which is able to call up previously programmed individual settings for various systems.

On account of the car’s greater driving performance, stronger brake systems are now in use with 330-mm brake discs in front and 299-mm discs at the rear. The 718 Cayman now has the brake system formerly used in the Cayman S. The 718 Cayman S, on the other hand, uses the four-piston calipers of the 911 Carrera combined with six-millimetre thicker brake discs. 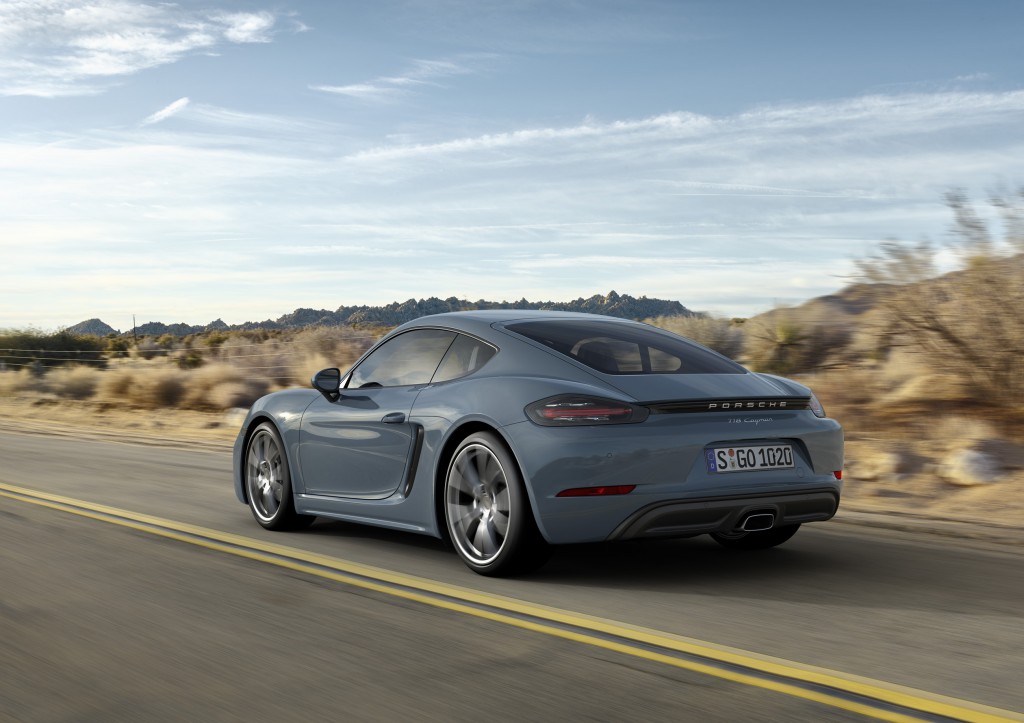 Taut proportions, prominent air intakes at the front and sides and low side profile underscore the boost in dynamics. The 718 Cayman’s nose has a much sharper profile, which gives the front end a wider and more masculine appearance. The ultra-slim front lights above the air intakes, which contain the parking lights and indicators, further reinforce this impression. Rounding off the front end are the significantly larger cooling air intakes and bi-xenon headlights with integrated LED daytime running lights. The redesigned rear has a much wider look due to the accent strip in high-gloss black with integrated Porsche badge between the tail lights. The tail lights have been completely redesigned and are distinguished by the three-dimensional technology and four brake spots that appear to float freely. 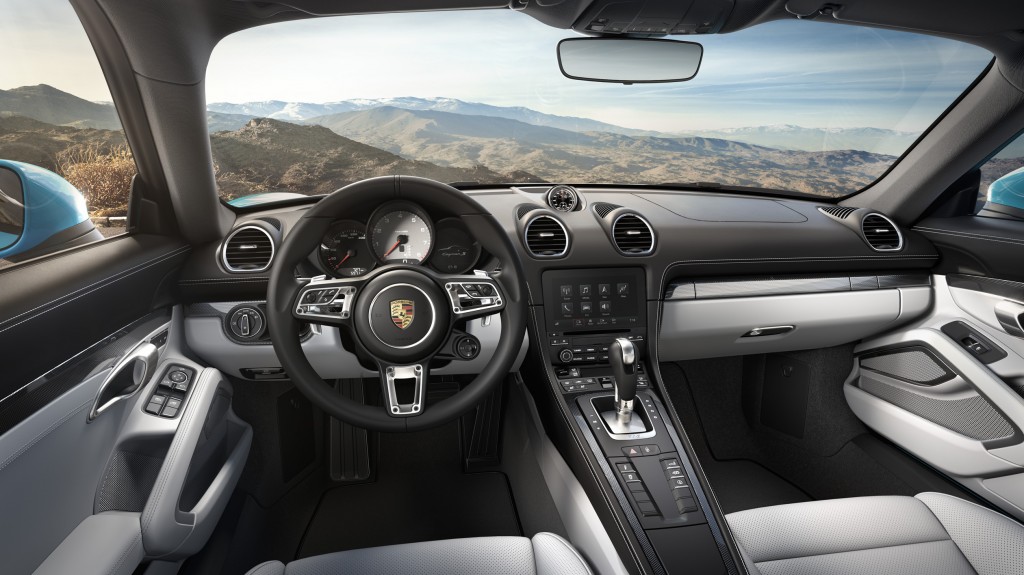 Inside, revisions are visible for both the 718 Cayman and the 718 Boxster. The upper part of the dash panel including air vents is new. The new sport steering wheel in the same design as the 918 Spyder, as the extensive connectivity options, have now been added to the 718 cockpit along with Porsche Communication Management (PCM) as a standard feature. The new system also includes special extensions for smartphones, such as a second USB port, Apple CarPlay and Porsche Car Connect. 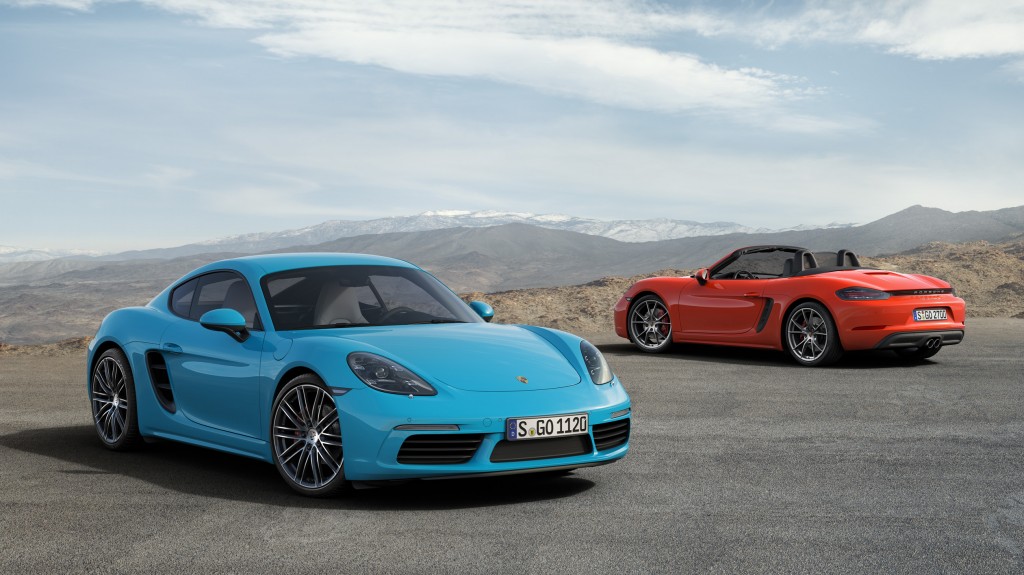 The 718 Cayman and 718 Cayman S can be ordered now, with the first vehicles arriving before the end of the year. Can’t wait? Browse our current Cayman inventory here.