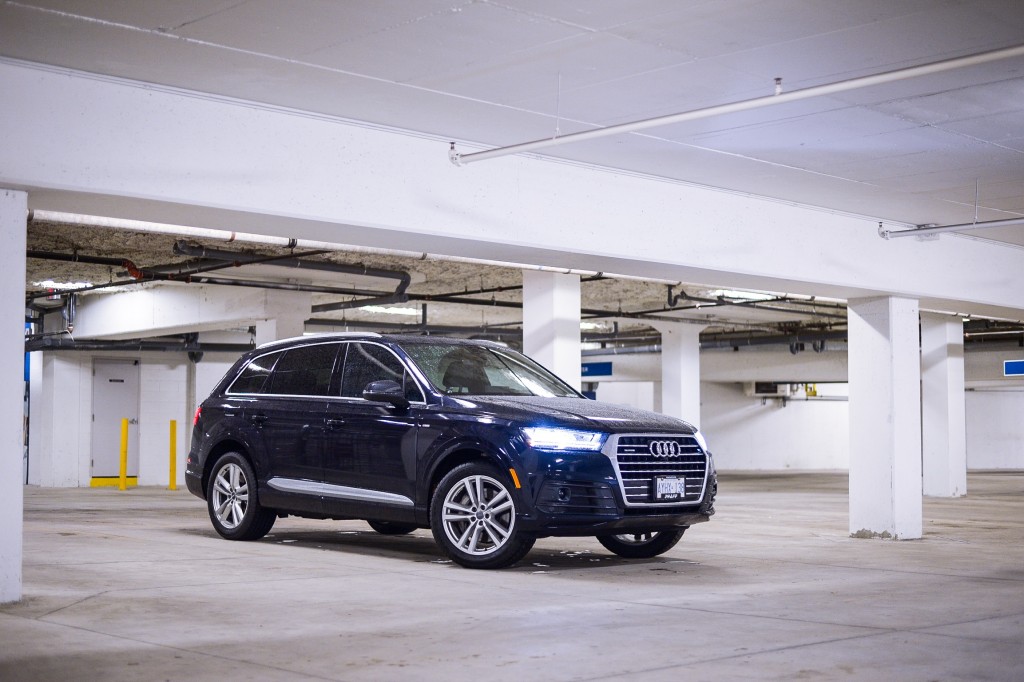 I have to admit, upon seeing the first photos of the all-new Audi Q7 about a year ago, I was a little nonplussed. In my mind, the debut of the original Q7 was a seminal moment for SUVs: it was big, it was bold, but it was also unabashedly smooth and modern, with few of the faux-macho styling cues of that other manufacturers were resorting to. Despite its size and its presence, the original Q7 looked clean, it looked friendly, and it did wonders for the category. 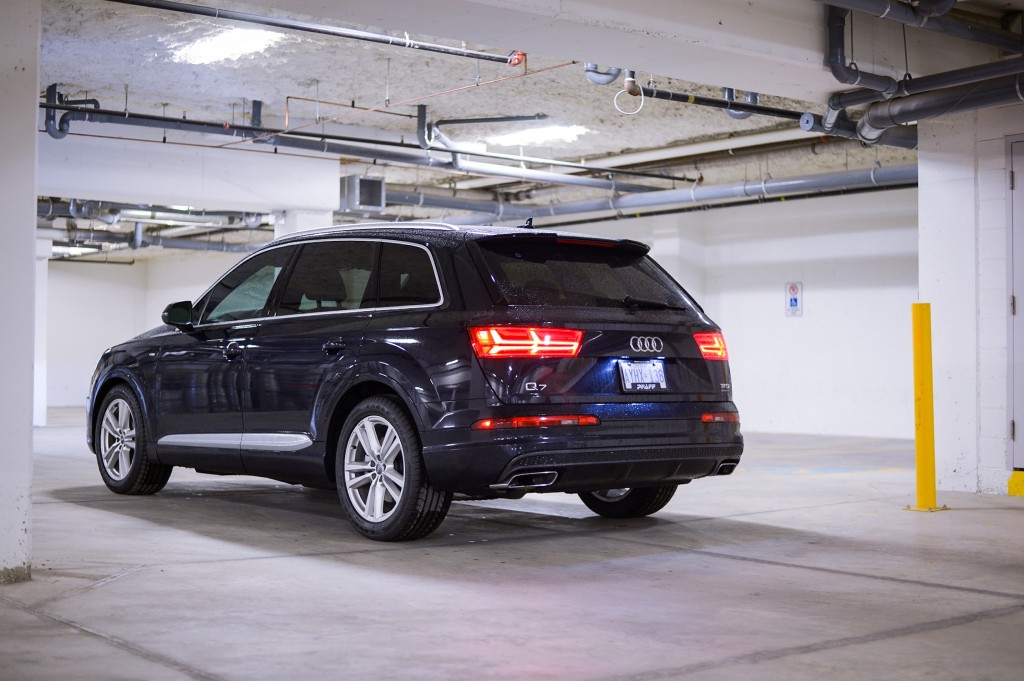 The new Q7 is a more aggressive piece of design, with a jutting, angular one-piece grille picked out with a thick metallic frame. Yet despite its sharpened contours, its shape is more conventional, with less of the gently-tapering fuselage effect of the original; to liven up its flatter sides, Audi’s resorted to adding tacked-on trim strips to make things more interesting. It’s just a little fussy, the exterior not something you’d normally expect from Audi.

Fortunately, in person, the Q7 looks a lot better than it does in photos, and its lower ride height gives it a sporty, purposeful stance that bridges the gap between sport-ute and wagon. It’s also easier to get into and out of than before, giving access to its true centrepiece: the interior. 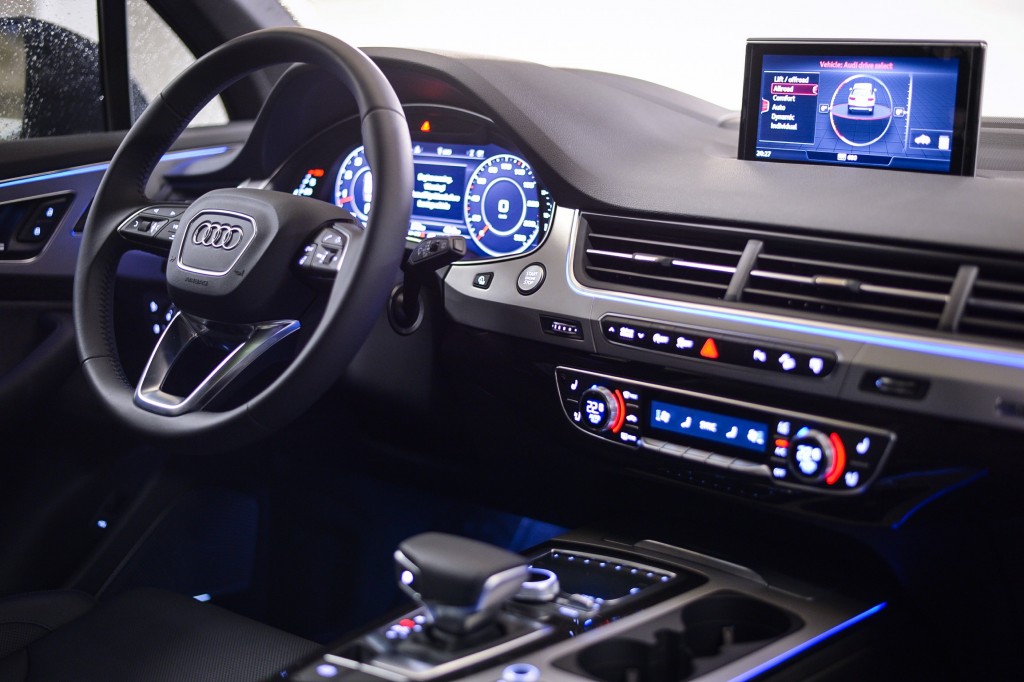 Nobody sweats car interior details like Audi. And being the brand’s flagship SUV, every piece of the Q7’s interior is a source of delight for the driver. The fit and finish is, expectedly, spectacular, with superb materials used throughout, and assembly quality that would shame “handmade” luxury cars many times more expensive. Finished in black with aluminum and grey-stained wood trim, you’d expect that my Q7’s interior would have felt sombre, but it was anything but: highlighted by subtle blue pinstripe LEDs (a rainbow of colours is available for you to choose), soft mood lighting, and with pin-sharp display screens, it was a high-tech, high-touch lounge, like a rolling version of the nicest hotel lobby you’ve ever spent time in. 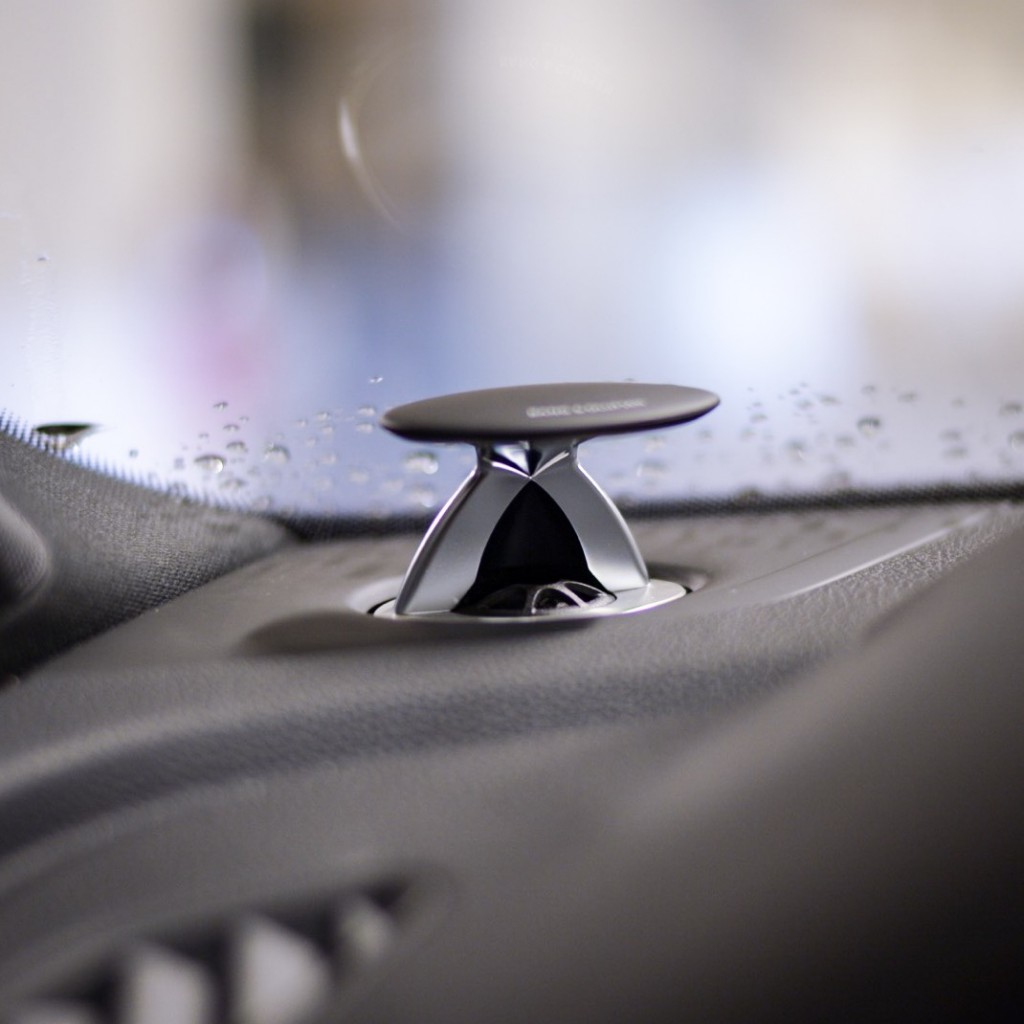 As ever, Audi’s love affair with technology means the Q7’s in-car infotainment system leads the industry. A razor-thin central display motors out of the top of the dashboard and gives you instantaneous access to all vehicle systems; it’s the quickest, most responsive system I’ve yet used, impressive when you consider that it not only takes conventional input via the MMI control knob, but also allows you to input navigation destinations using handwriting recognition on the touchpad. Should you have an Android or Apple device connected to the Q7’s USB port, the touchpad’s menu button flips you quickly between MMI functions and your smartphone interface in the slickest implementation I’ve yet seen of such a gateway. 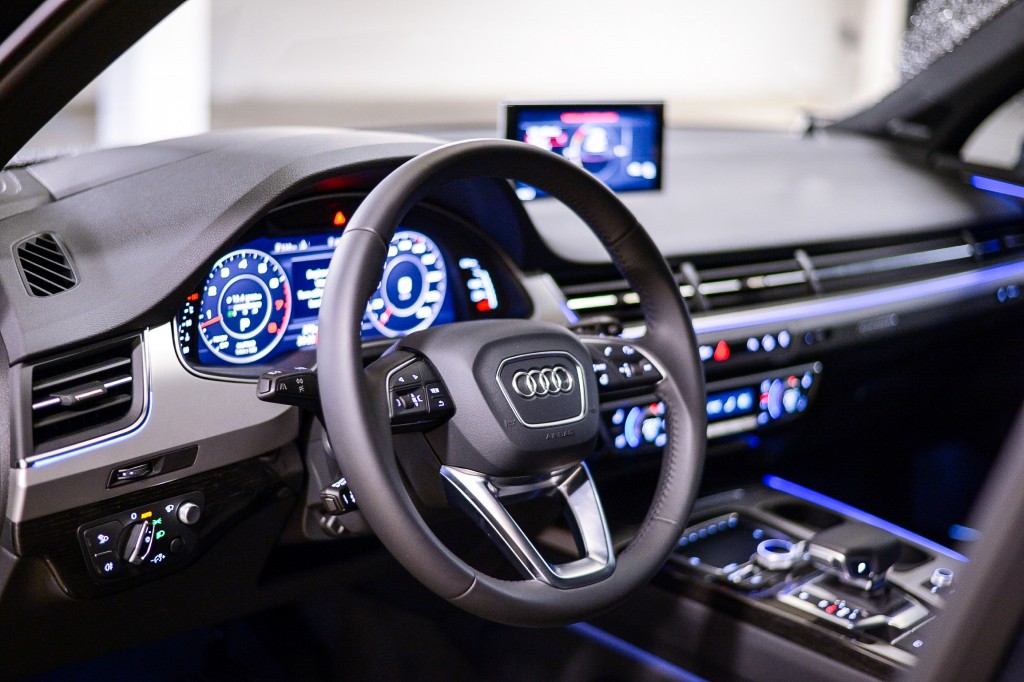 The central screen is allied with the standard-fit Audi virtual cockpit display, which replaces a conventional instrument cluster in front of, and operated by, the steering wheel. Not only does it feature the usual trip-computer, infotainment, and driver-assistance system readouts, but it also integrates the most unbelievable large-format 3D map you’ve ever seen – which, when you push the “view” button on the wheel, shrinks the gauges down to miniature size and gives you a live street view that even renders the height of the buildings you’re driving between. It’s very sci-fi, but it’s also very useful, giving you a better understanding of your location and surroundings than any other navigation system. 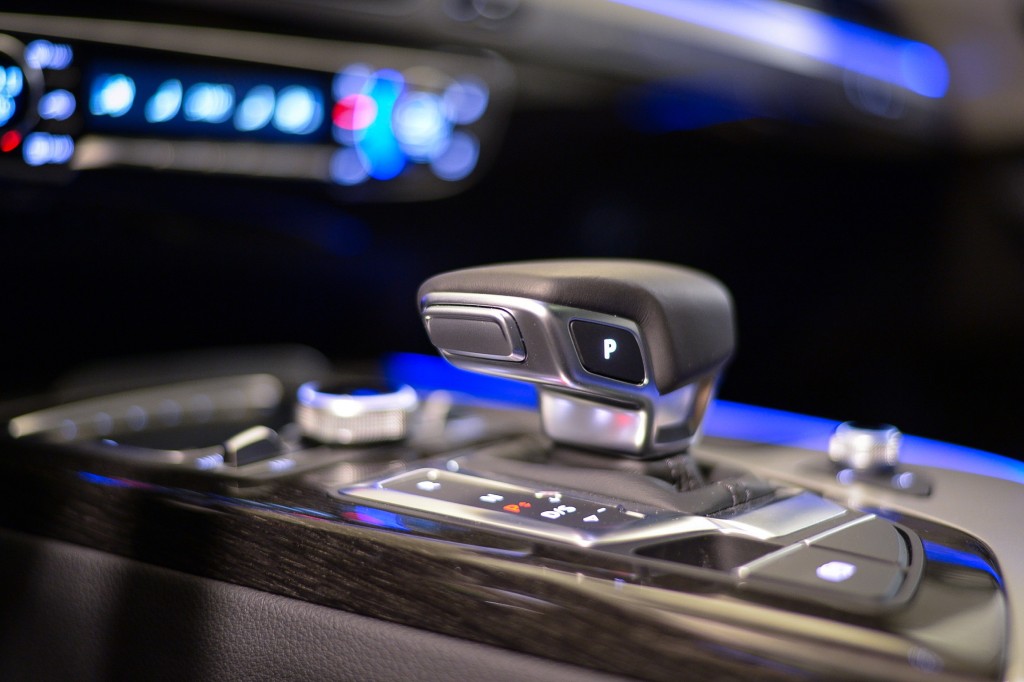 Sci-fi would appropriately describe the way the Q7 goes down the road as well. For such a large, seven-passenger SUV on 20-inch tires, it moves a deftness and level of agility that will blow you away. The smoothness and immediacy of acceleration and braking is what’s most impressive: both seem to happen with almost no inertia, which is incredible given the size of the vehicle. Fitted with Audi’s supercharged 3.0-litre, 333-hp TFSI six-cylinder, the Q7 pulls away effortlessly, and its automatic transmission (controlled by the brand’s signature new powerboat-style shifter) blurs all its eight gears into one seamless rush up to speed. Adaptive air suspension, with a ride height that varies according to which driving mode you’ve chosen using Audi drive select, means the new Q7 stays flat in the corners well past the point where you’d expect a big SUV to struggle, and the steering is beautifully judged, with perfect weighting and great road feel. 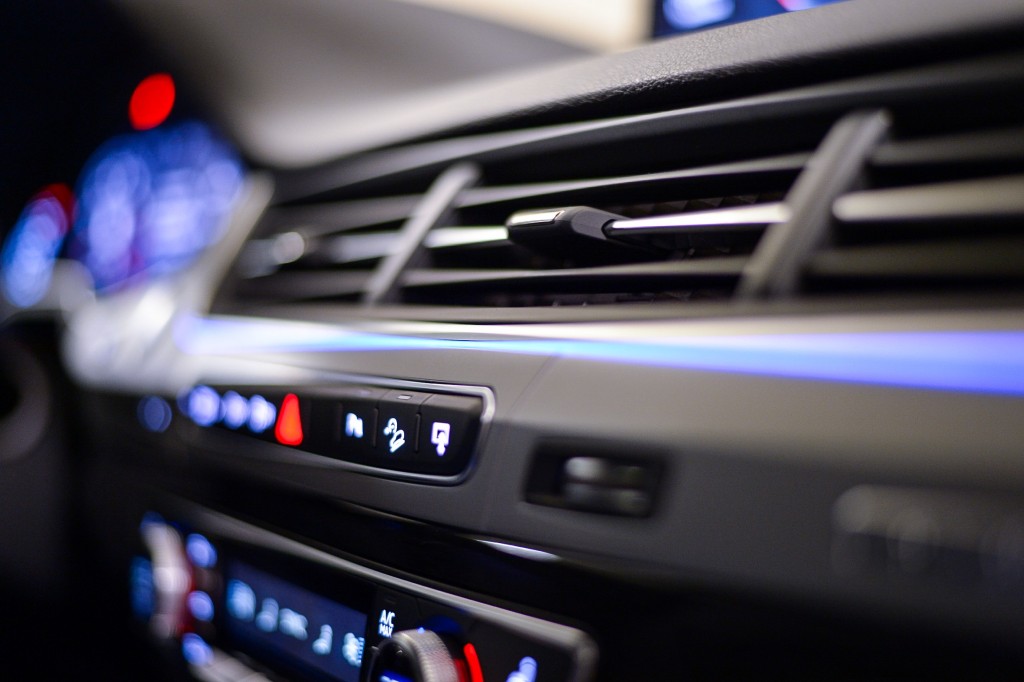 Impressive performance is par for the course for a flagship Audi, of course. What gives the Q7 such an out-of-this-world sensation is the level of quiet and refinement that comes along with the sporty drive. Engine noise is barely perceptible at any speed, wind and road noise are incredibly well managed, and the air suspension, no matter what mode you’re in, glides over even the biggest bumps. The feeling is as if you’re in a high-speed hovercraft, skirting all of the road’s imperfections while managing to stay completely in touch. 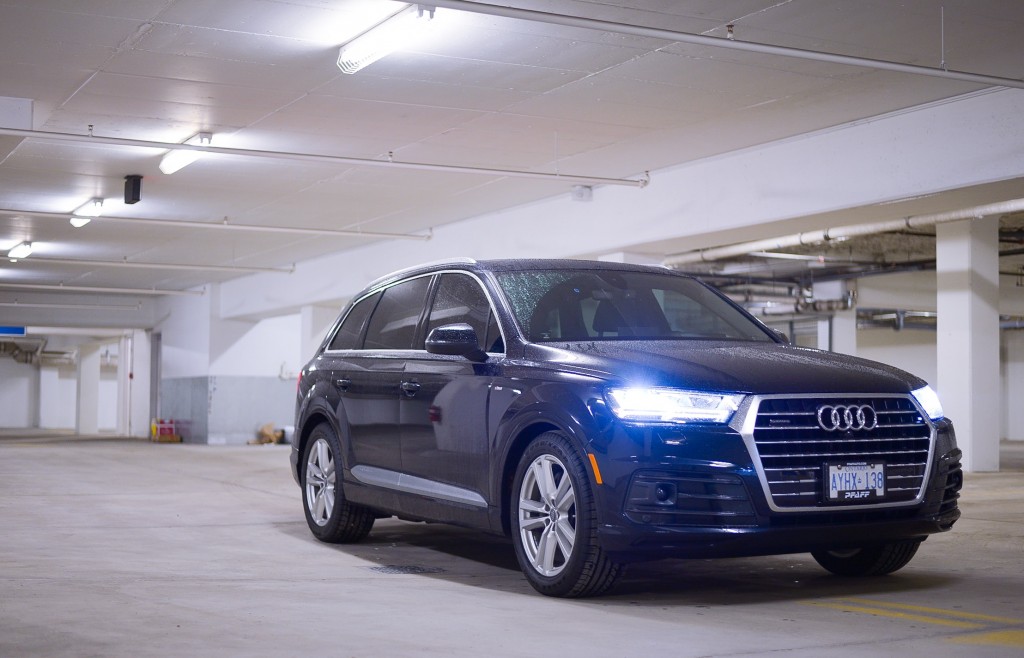 This substantial increase in refinement doesn’t come with a weight penalty, either. In fact, the new Q7 is up to 325 kg lighter than its predecessor. Having lost the weight of a whole family to cart around, no wonder it moves along with such verve, and no wonder that fuel economy is improved despite the addition of even more features and even more interior space. 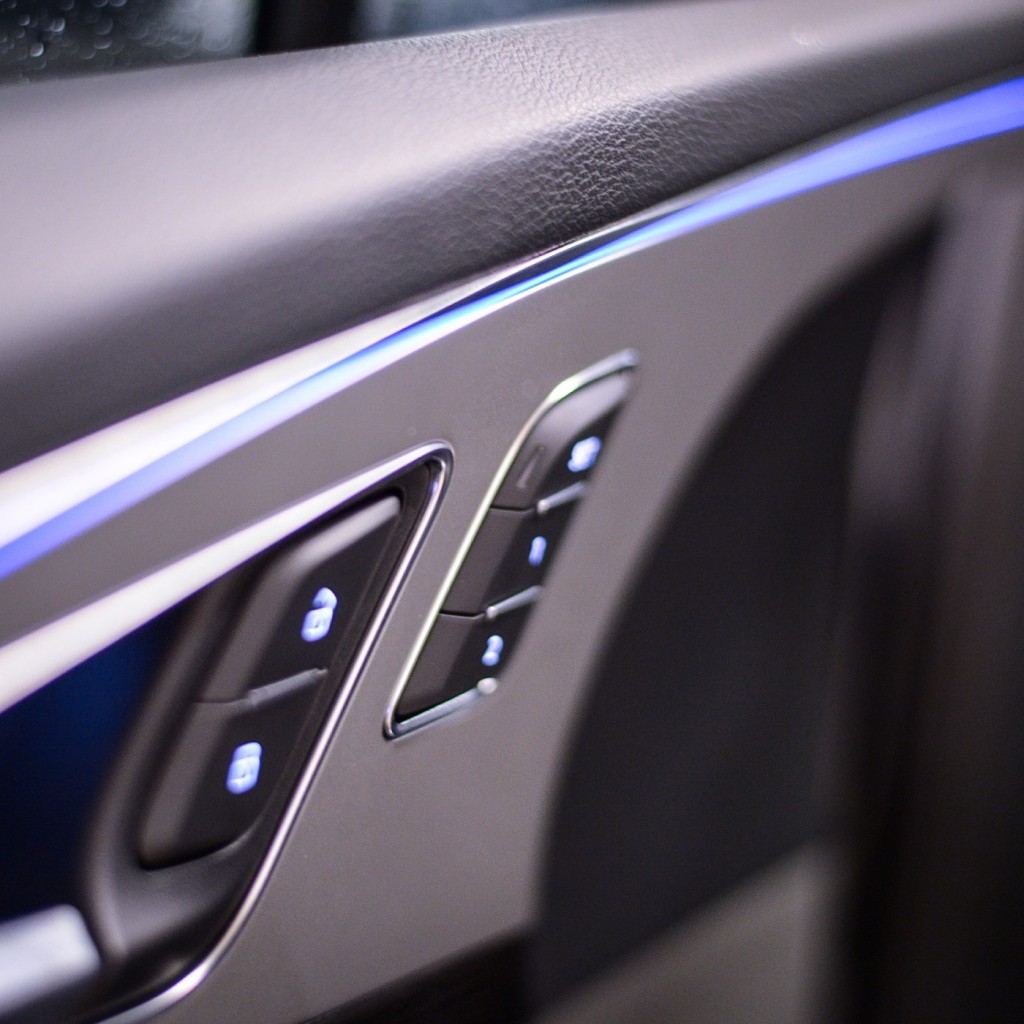 It’s an impressive balancing act that the new Q7 performs: lighter, and thus better-performing, yet with a massive upgrade in comfort, luxury and features at the same time. Proof positive that Audi’s engineers have been working harder than ever.

Browse our new-car inventory in Newmarket and Vaughan.