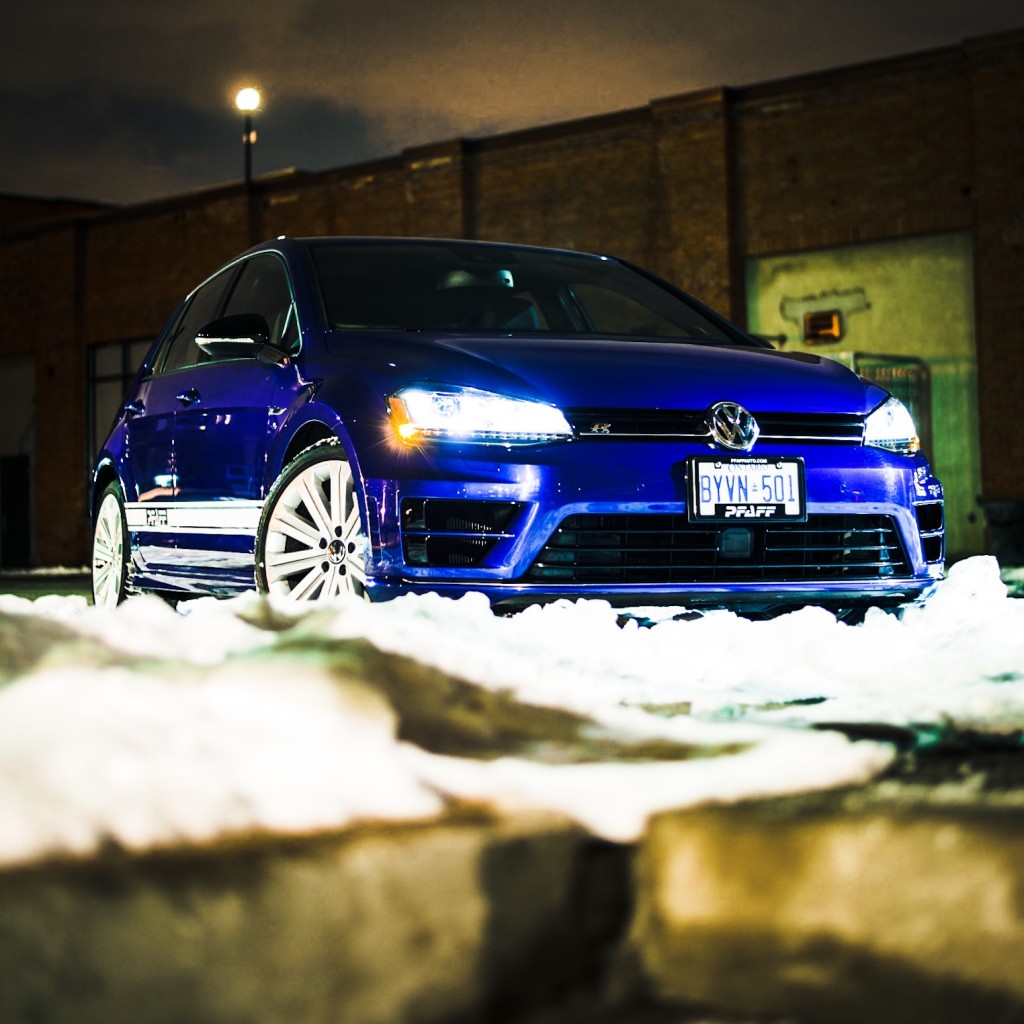 Doesn’t look like much at first glance, does it, the Volkswagen Golf R? If it wasn’t for the R-exclusive blue paintwork and the four exhaust pipes, you probably wouldn’t give it a second glance sitting in traffic, especially on a set of winter wheels and tires a size smaller than the 19-inch, triple-spoke machine-finish alloys on which it normally rolls. The clues are there, however, if you’re paying attention: a front bumper that’s a bit more serious-looking than a GTI’s, with enlarged air intakes and front splitter ringed in brushed aluminum; a noticeably lowered bulldog stance; adaptive, curve-following bi-xenon headlights, and R badges on the sides and rear. 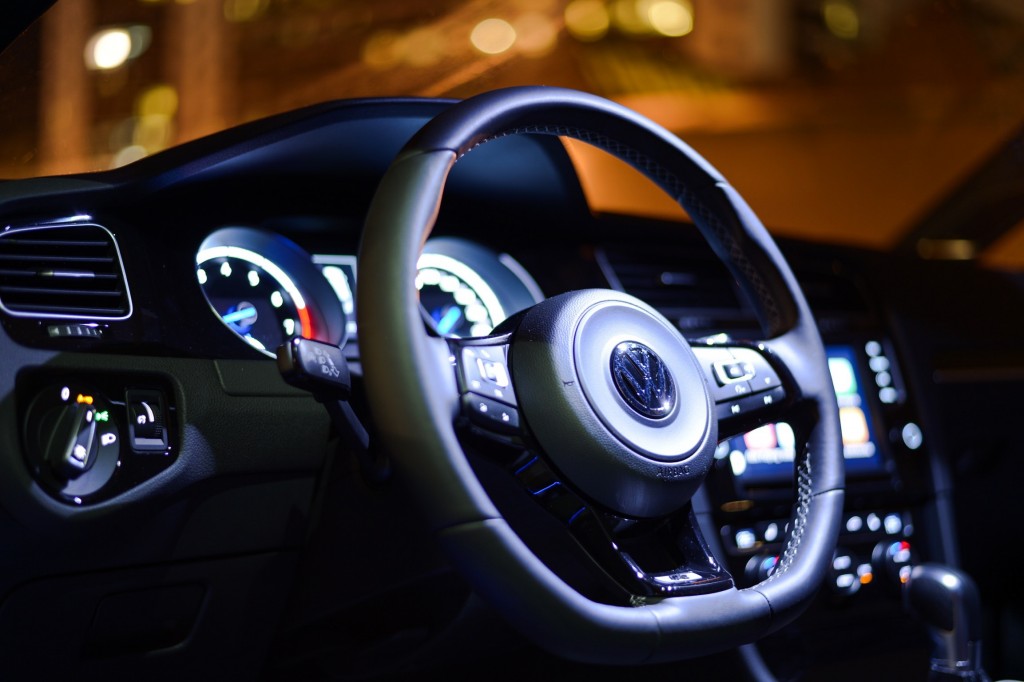 The Golf R is a sleeper in the very traditional German sense of the word, then. With not a lot going on outside, what makes it special lurks under the skin. Power, for one thing: while the 2.0-litre four-cylinder is a distant relative of the one fitted to the GTI, it’s making significantly more power thanks to numerous revisions, including new engine-management programming, a different turbocharger, and that quad-pipe exhaust. All told, it makes 292 horsepower, 82 more than the GTI; more importantly, it sounds the part, with an interior sound symposer that, in its more aggressive drive modes, pipes extra engine noises into the cabin. 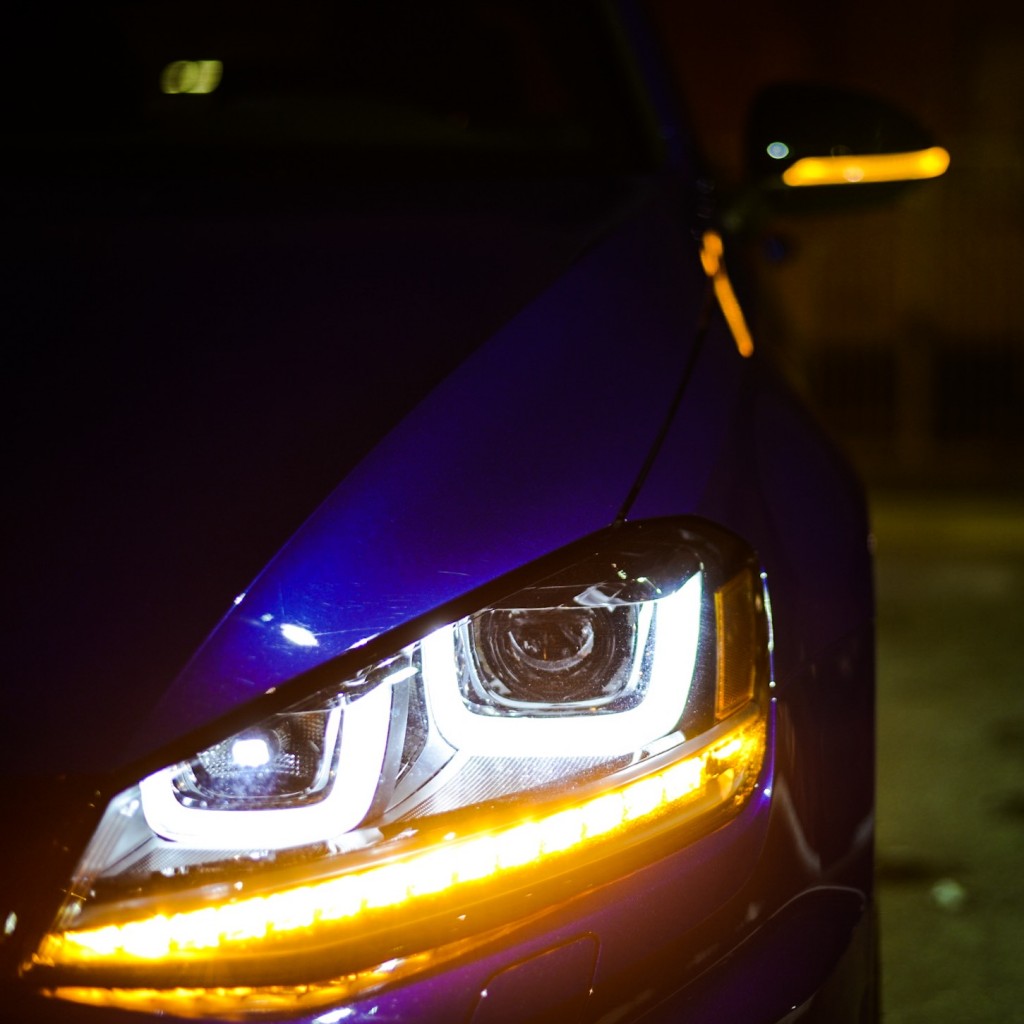 It doesn’t immediately feel that special. Around town, driven moderately for moderate, around-town things, it basically feels like a Golf. The steering is light, easy and precise; the ride quality is good and the engine relatively muted. Choose the six-speed DSG gearbox, like this car has, and it blurs the transition between gears seamlessly. Only the strong brake pedal feel and the tight, precise body control you feel after hitting a bump hint that there’s more potential in store. 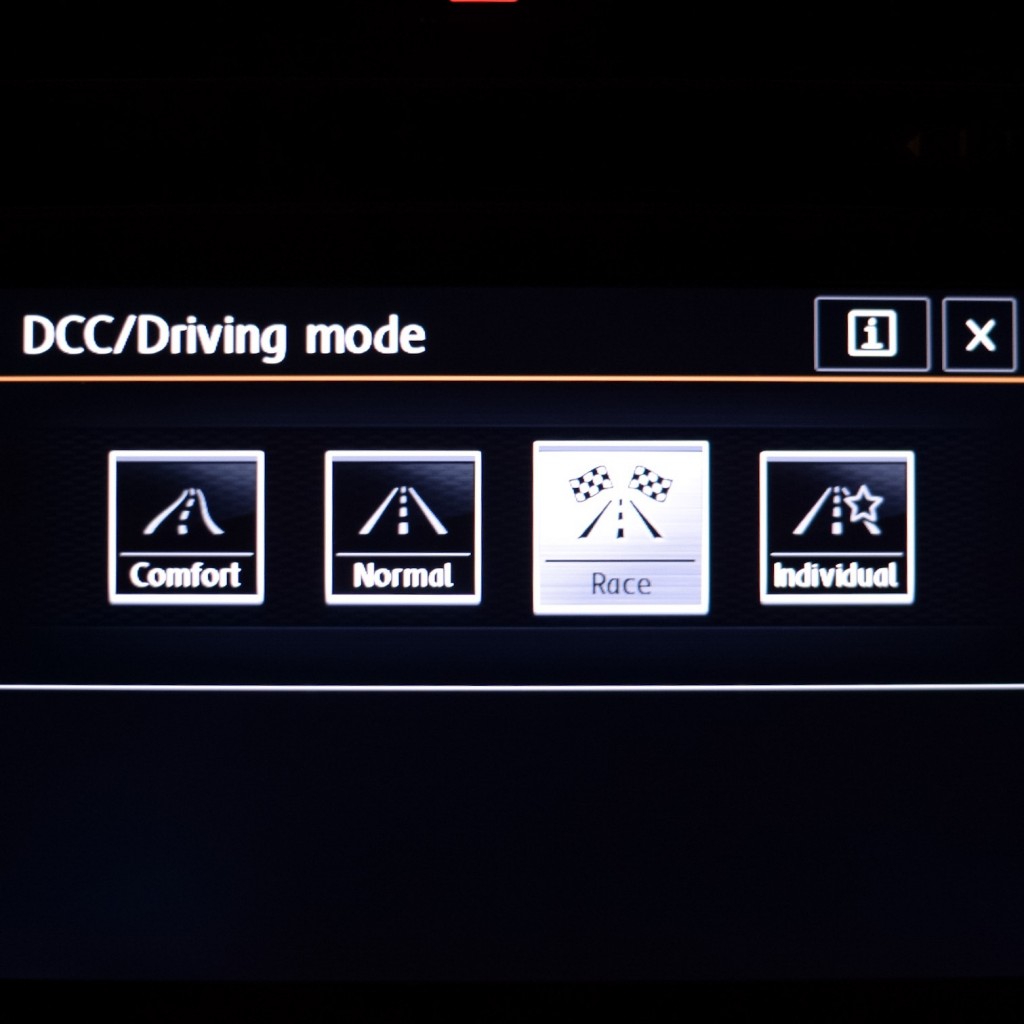 Like many modern cars, the Golf R comes with a lot of adjustability built-in. Hit the mode button down by the gearshift and you’re presented with a menu on the touchscreen that lets you choose between normal, comfort, race and “individual” modes. Bring up the menu for individual, and you’re presented with choices for a half-dozen different systems, from the response of the throttle, to the noise level of the exhaust and even the way the lights and optional adaptive cruise control behaves. 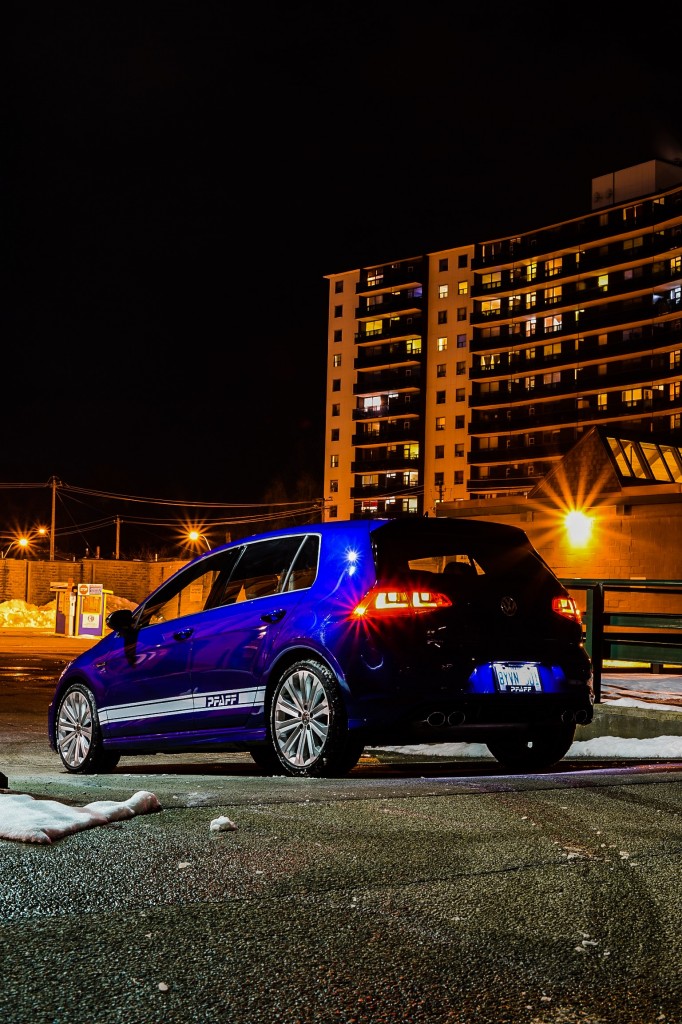 It’s in this (presuming you choose sportier settings) and race mode – and once you get out of the city and really start to drive the car hard – where the Golf R comes alive. The steering weights up (its level of assistance is one of the many variables), the engine rumbles, the exhaust pops on every upshift, and you start to realize just how much cornering grip there is – even with winter tires scrabbling at dry pavement. The engine, which feels a little lethargic when you’re going slowly, is aggressively turbocharged, and the boost, when it comes, comes in an addictive, swelling rush. The power delivery isn’t hugely precise, but it’s very exciting, and the Golf R’s chassis and all-wheel drive system have no problem keeping it under tight control. 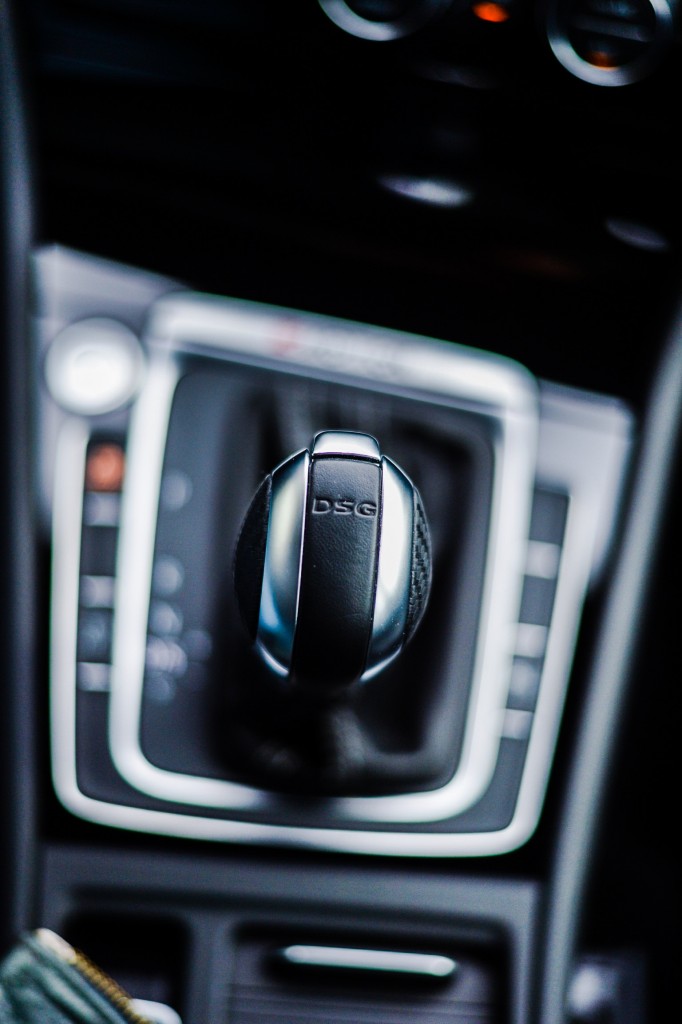 So well-controlled and balanced is the chassis, in fact, that it’s actually deceptive how quickly the R can cover ground. Even in race mode, it doesn’t beat you up, the brakes have terrific stopping power, and on the street, you never seem to run into a situation where you’re encountering either understeer or oversteer. Compared to the similarly-priced BMW M235i, which comes with rear-drive as standard (though xDrive all-wheel drive is now available), it’s better in any objective way, particularly on anything but dry pavement – grippier, more stable, plain faster – but it’s so composed that it’s maybe a little less exciting. 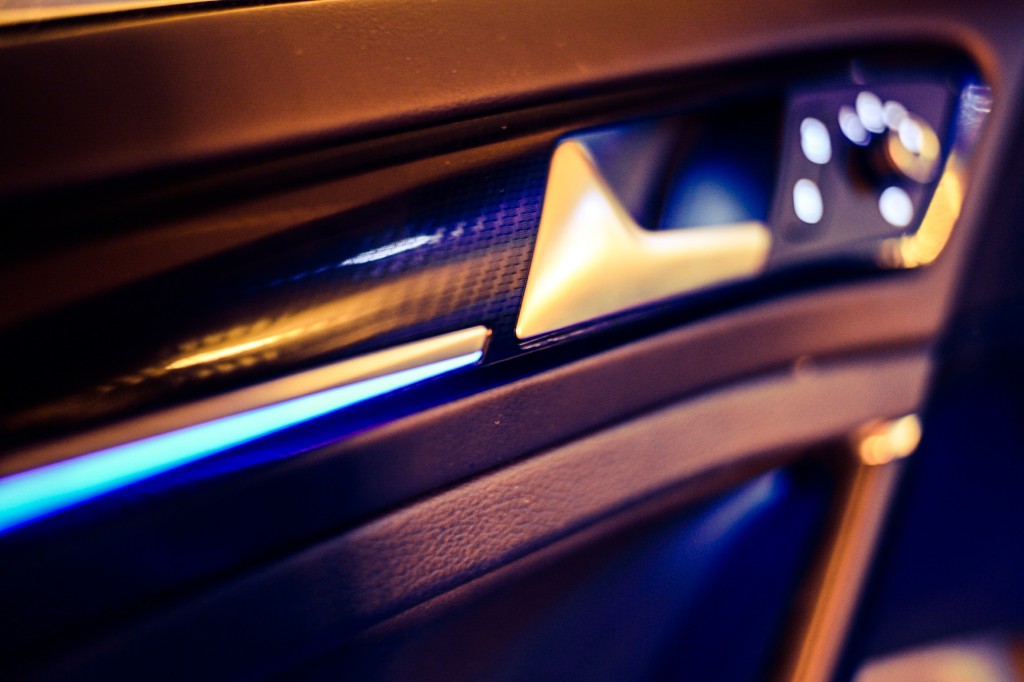 For some reason, Volkswagen’s decided that blue, as an accent colour, is even sportier than the red you see ringing its way around the front-wheel drive GTI. It’s present on the exterior of the car (and in those R badges), and when you crack open the door, blue LEDs highlight the door sills, carbon-effect trim pieces and the spangly, brightly-lit instrument cluster. Beyond that, and a pair of very serious-looking, deeply-bolstered front buckets, there’s little to differentiate the interior of the R from any other Golf. No bad thing, given that the current Golf pretty much sets the standard for mainstream compact-car interiors, with its premium materials, impressive build quality, and giant touch-screen infotainment system. 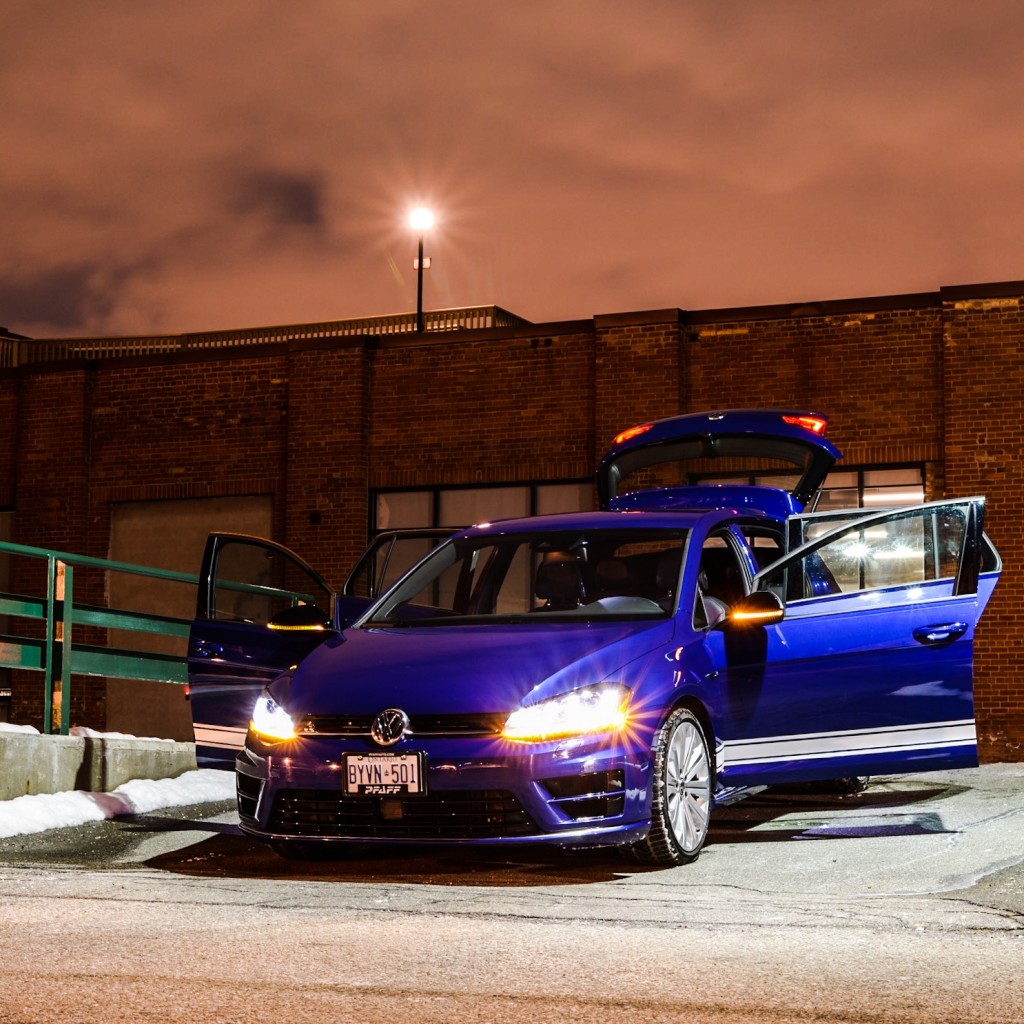 It’s also, given the Golf’s lilliputian footprint, amazingly roomy and practical. The current generation of Golf is built on Volkswagen group’s versatile MQB component set, a flexible set of technical bits that also underpins, in the North American market, the Audi A3/S3. You not only get, therefore, front seats with a huge range of adjustment, plenty of leg- and shoulder-room, and a large trunk, but you also get access to technology that was previously unheard of in this class. Take, for instance, the brilliant touchscreen infotainment system, which features both Android Auto and Apple CarPlay – plug in your phone and you get direct access to its music, navigation, and voice control functions through the touch screen. You also get available blind-spot monitoring, lane assist, a slickly integrated back-up camera, and more. 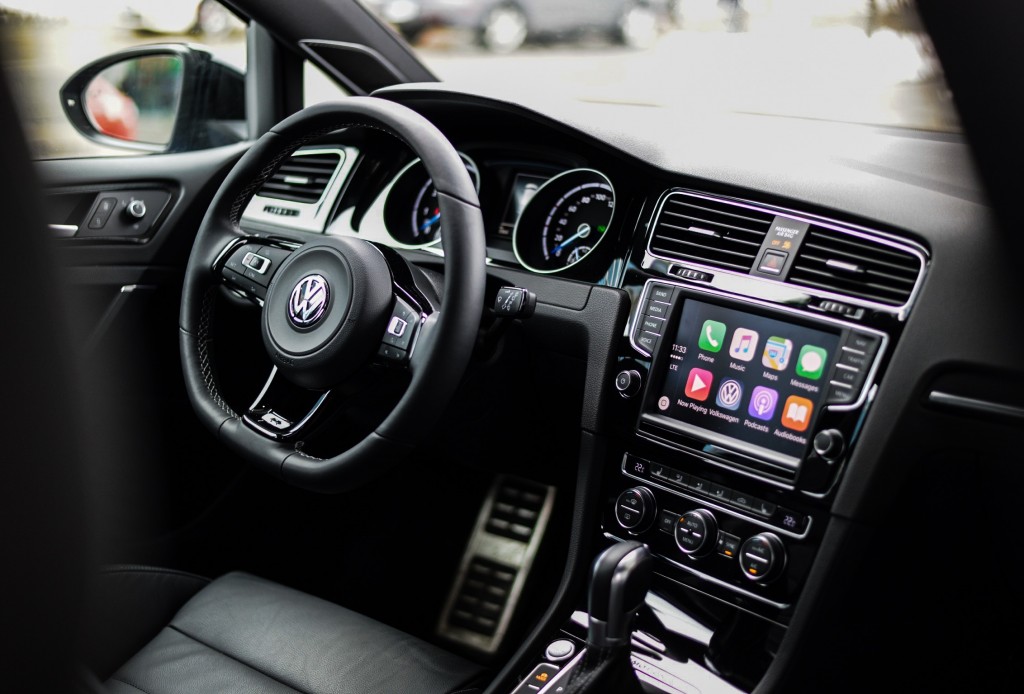 All in all, the Golf R is a very slick package, and it’s a pretty stunning value at a starting price of just $39,995 – that’s just a thousand dollars more than a loaded GTI, with the added benefits of all that extra horsepower, all-wheel drive, and more. Load it up with the DSG transmission and technology package, and you have a compact, leather-lined rocketship for less than $45,000. The Golf R is truly a car that can do it all, in pretty much any conditions – and while there are some vehicles in its price range that might be better in one specific area, very few of them have its breadth as well.

Curious about the Golf, and Golf R? Browse our inventory here. 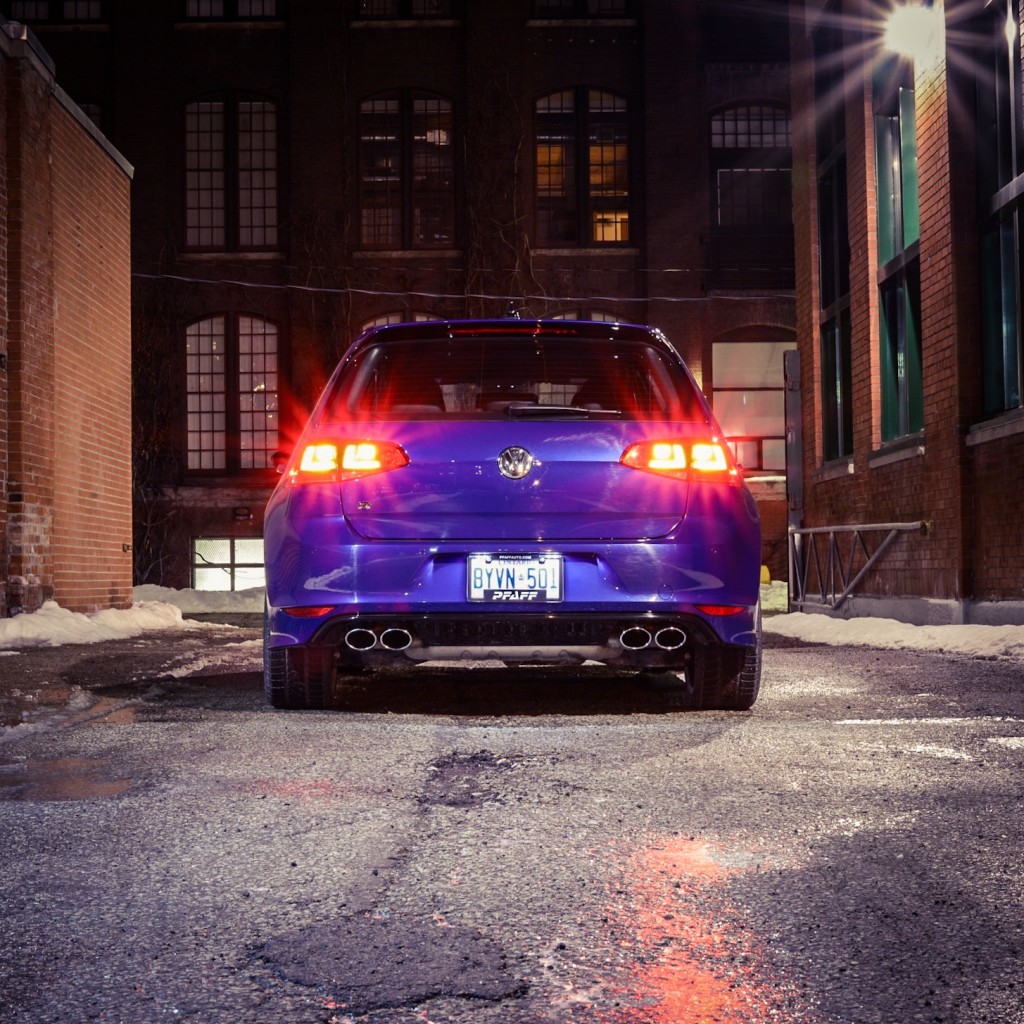