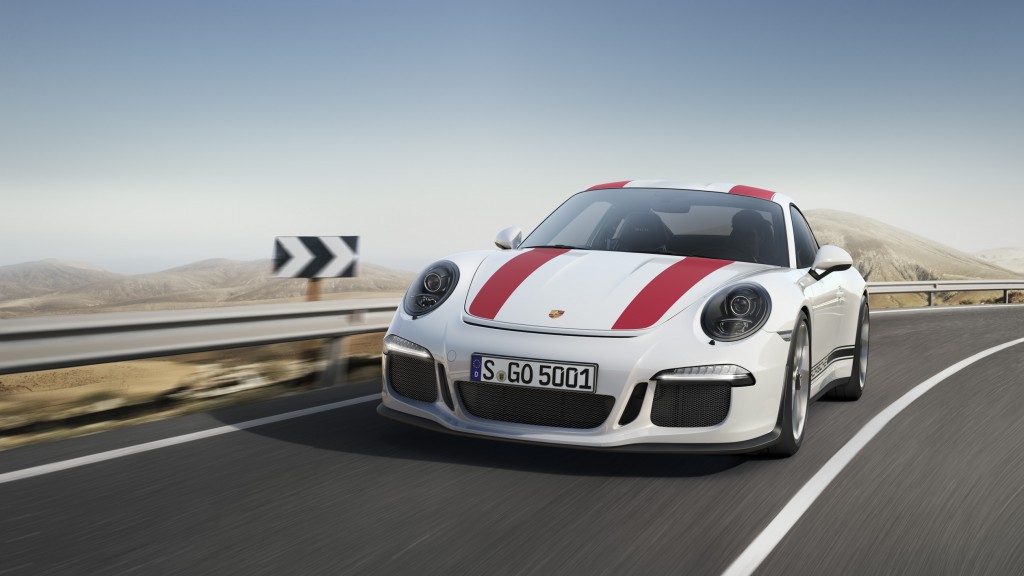 With the new 911 R, Porsche is delivering to the world a classical, purist sports car. Its 500-hp four-litre naturally aspirated flat engine and six-speed transmission place it firmly in the tradition of its historic role model: a road-homologated racing car from 1967.

Produced as part of a limited production series, the 911 R (R for Racing) performed in rallies, in the Targa Florio and in world record runs. Like its legendary predecessor, the new 911 R relies on lightweight construction, maximum performance and an unfiltered driving experience: this special limited-edition model, which will be made in a run of just 991 units, has an overall weight of 1,370 kg and is currently the lightest version of the 911. 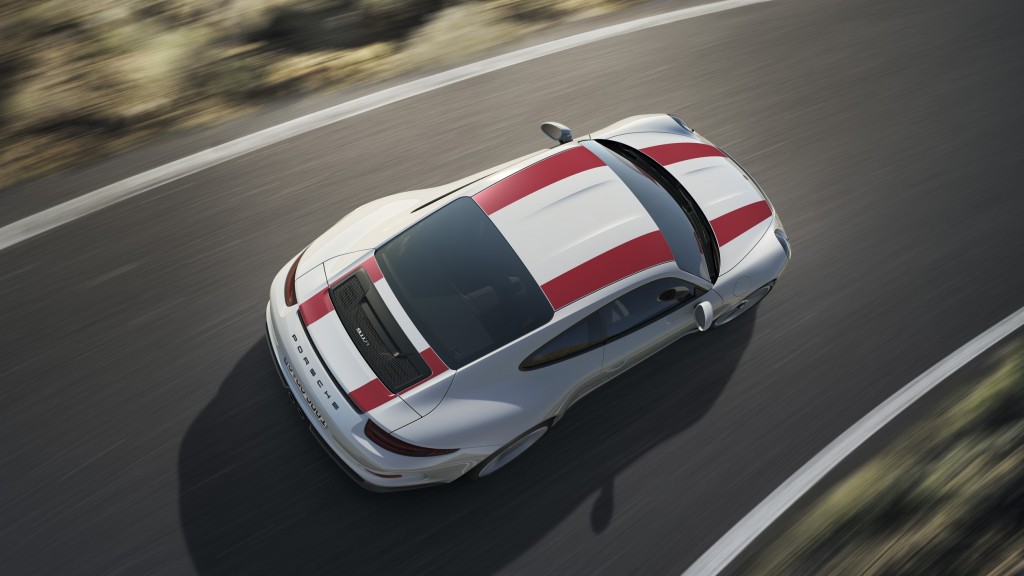 With the high-revving six-cylinder naturally aspirated engine and manual sports transmission, Porsche is once again displaying its commitment to especially emotional high-performance sports cars. Developed in the motorsport workshop, the 911 R extends the spectrum of high-performance naturally aspirated engines alongside the motor racing models 911 GT3 and 911 GT3 RS.

At work in the rear of the 911 R is the six-cylinder flat engine with a displacement of four litres, familiar from the 911 GT3 RS. The racing engine delivers 500 hp at 8,250 rpm. From a standing start, the rear-engined car breaks through the 100 km/h barrier in 3.8 seconds. In keeping with the puristic character of the vehicle, the 911 R is available exclusively with a six-speed manual transmission. Short gearshift travel underlines the active driving experience. The forward thrust of the 911 R continues to a speed of 323 km/h. 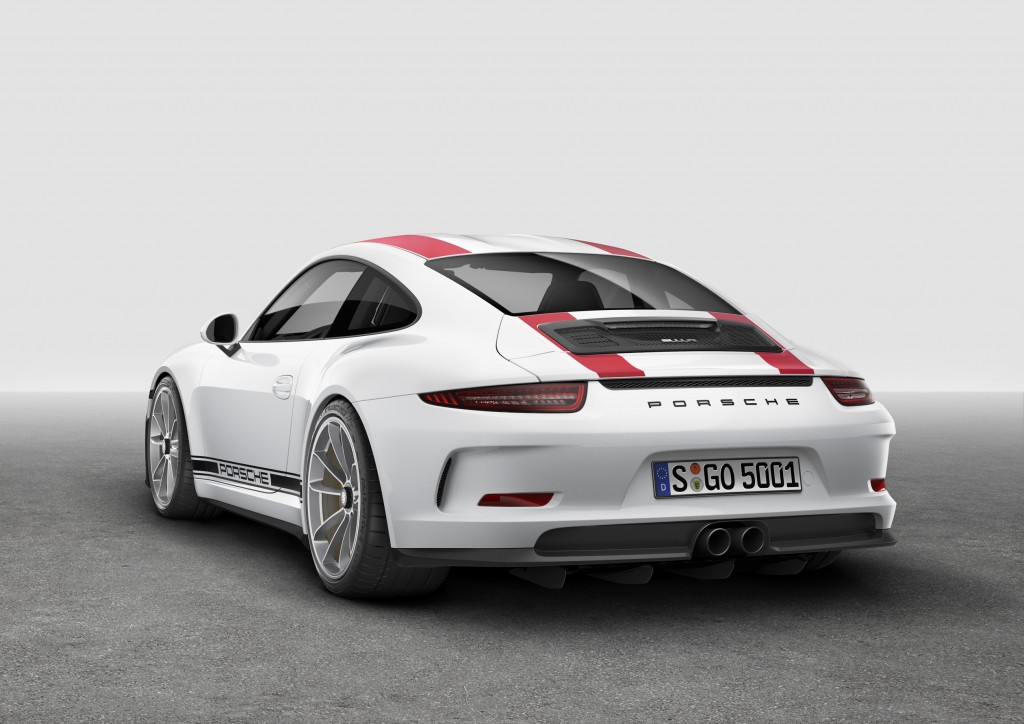 The 911 R’s specially tuned standard rear-axle steering guarantees direct turn-in characteristics and precise handling while maintaining high stability. The mechanical rear differential lock builds up maximum traction. Ensuring the greatest possible deceleration is the Porsche Ceramic Composite Brake (PCCB) as a standard feature. Front discs measure a generous 410 mm on the front axle and 390 mm on the rear. Ultra-high-performance tires 245 mm at the front and 305 mm at the rear are responsible for contact to the road. They are mounted on forged 20-inch lightweight wheels with centre-locks in matt aluminium.

Motorsport development has specially adapted the control systems of the Porsche Stability Management (PSM) for the 911 R. A double-declutch function activated by pressing a button for perfect gearshifts when changing down is also part of the repertoire of the 911 R, as is the optional single-mass flywheel. The result is a significant improvement in spontaneity and high-revving dynamics of the engine. For unrestricted practicality in everyday use, a lift system can also be ordered: it raises ground clearance of the front axle by approximately 30 millimetres at the touch of a button. 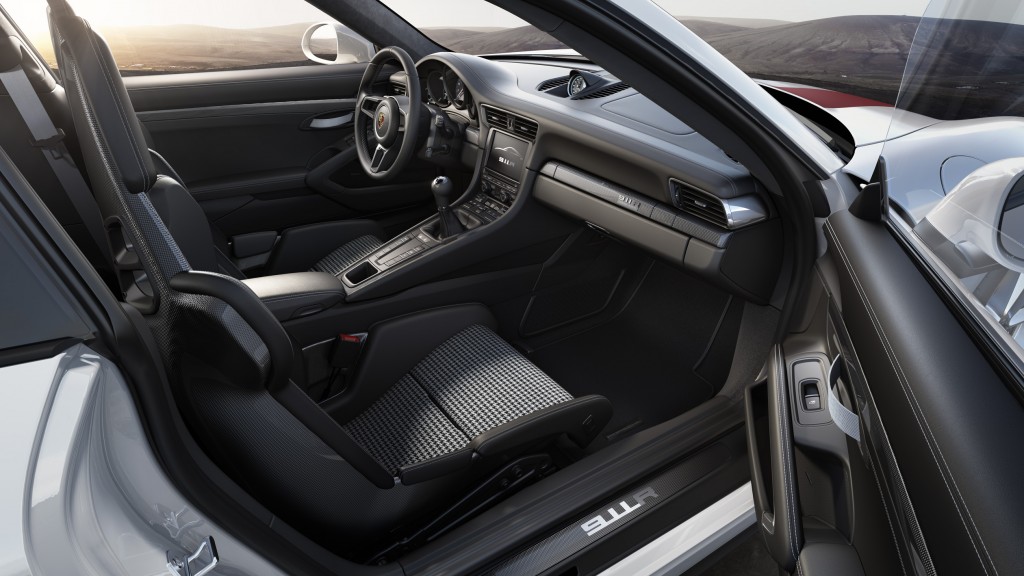 With its overall weight of 1,370 kg, the 911 R undercuts the 911 GT3 RS by 50 kg. Hood and fenders are made of carbon and the roof of magnesium. This reduces the centre of gravity for the vehicle. Rear windscreen and rear side windows consist of lightweight plastic. Additional factors are the reduced insulation in the interior and the omission of a rear bench seat. The optional air conditioning system and the radio including audio system also fell victim to the slimming cure.

The 911 R’s drive technology comes from the 911 GT3 RS. All the lightweight components of the body and the complete chassis originate from the 911 GT3. However, with a view to road use, the body does without the massive fixed rear wing. Instead, a retractable rear spoiler, familiar from the Carrera models, and a rear underbody diffuser specific to R models provide the necessary downforce. Front and rear apron come from the 911 GT3. The sports exhaust system consists of the lightweight construction material titanium. A redesigned spoiler lip is installed at the front. Porsche logos on the sides of the vehicle and continuous colour stripes in red or green over the entire mid-section of the vehicle show the relationship to its legendary predecessor. 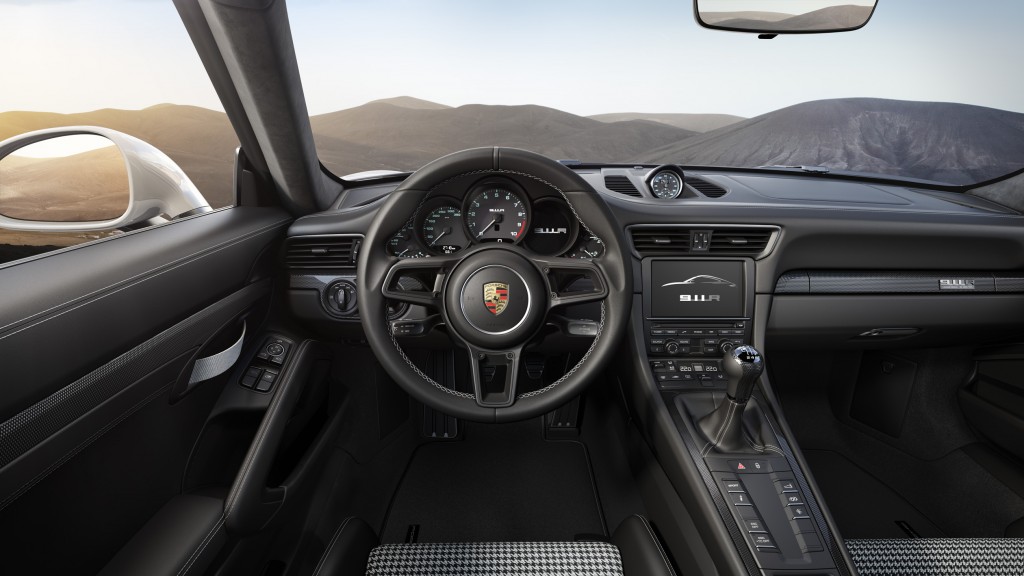 The driver sits in a carbon full bucket seat with fabric centre panels in Pepita tartan design, recalling the first 911 in the 1960s. An “R-specific” GT sport steering wheel with a diameter of 360 millimetres receives steering commands from the driver. Gearshifts take place in traditional manner via an R-specific short gearshift lever and the clutch pedal. Carbon trim strips in the interior with an embedded aluminium badge on the front passenger’s side indicate the limited number of the 911 R.

A very limited number of 911 R models will come to Canada, but we have a full selection of 911s for you to choose from.