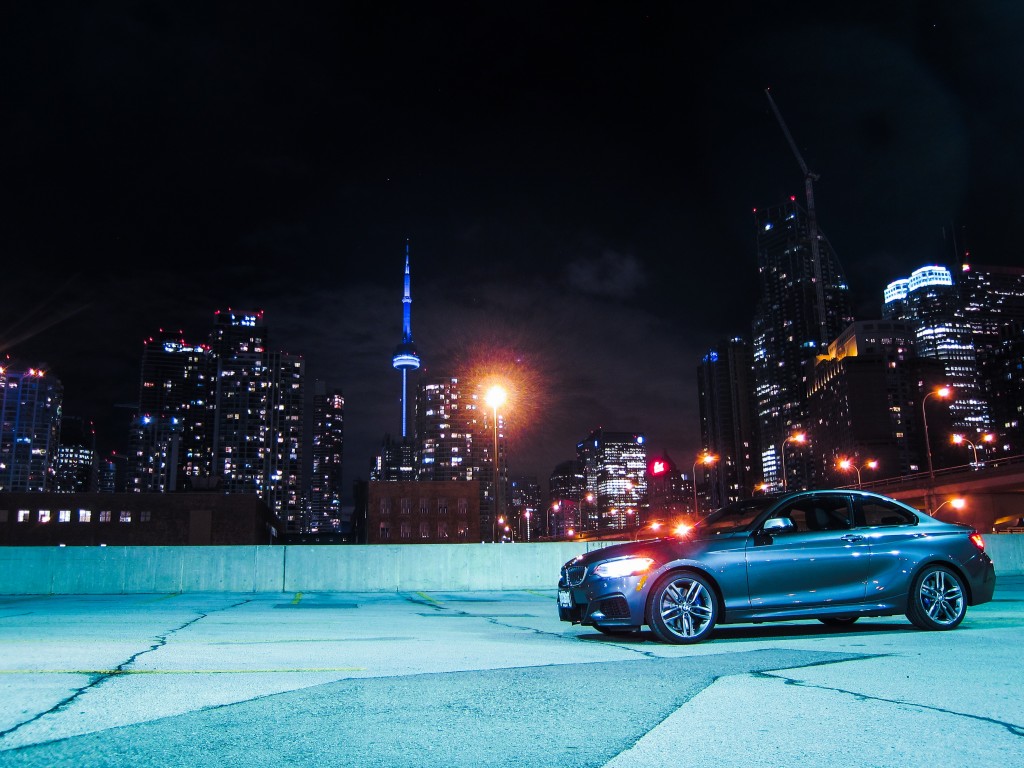 Most of the car reviews you’ll read on this site – indeed, most of the car reviews you’ll read on pretty much any site – are formed on the basis of a few days and, at most, a few hundred kilometres behind the wheel. Whether it’s an interesting vehicle in our inventory, or something a journalist has borrowed from a manufacturer, the time a reviewer spends with a car is necessarily limited; there are, after all, other people waiting to drive it, or there’s a salesperson who’s trying to sell it.

What you’re about to read below, though, is a little different: this Mineral Grey BMW M235i is a car I’ve spent a lot of time with, because it’s mine. Unsurprisingly, then, it is a car I like very much, but having spent a month and over 1,500 km with it so far, it’s also a car whose flaws I can be honest about, even if I think they add to its charm.

Being a bit of an old-car enthusiast (my mostly-daily driver during the summer is an air-cooled Porsche 911), I’m one of those people you’ll find always complaining about the needless size, weight, and complexity of modern cars. Safety legislation and the encroachment of the electronic world into every aspect of our lives has slowly begun to erode the character of the cars I grew up loving: increasingly-restrictive rules about crash-test safety, emissions, and efficiency has boxed manufacturers into tighter and tighter corners. These days, whether you’re driving a Volkswagen or a McLaren, you’re probably driving something with thick A-pillars, a turbocharged engine, and an automated gearbox; you’re probably choosing your radio stations by prodding a touch screen, and your parking maneuvers are likely aided by a rear-view camera. 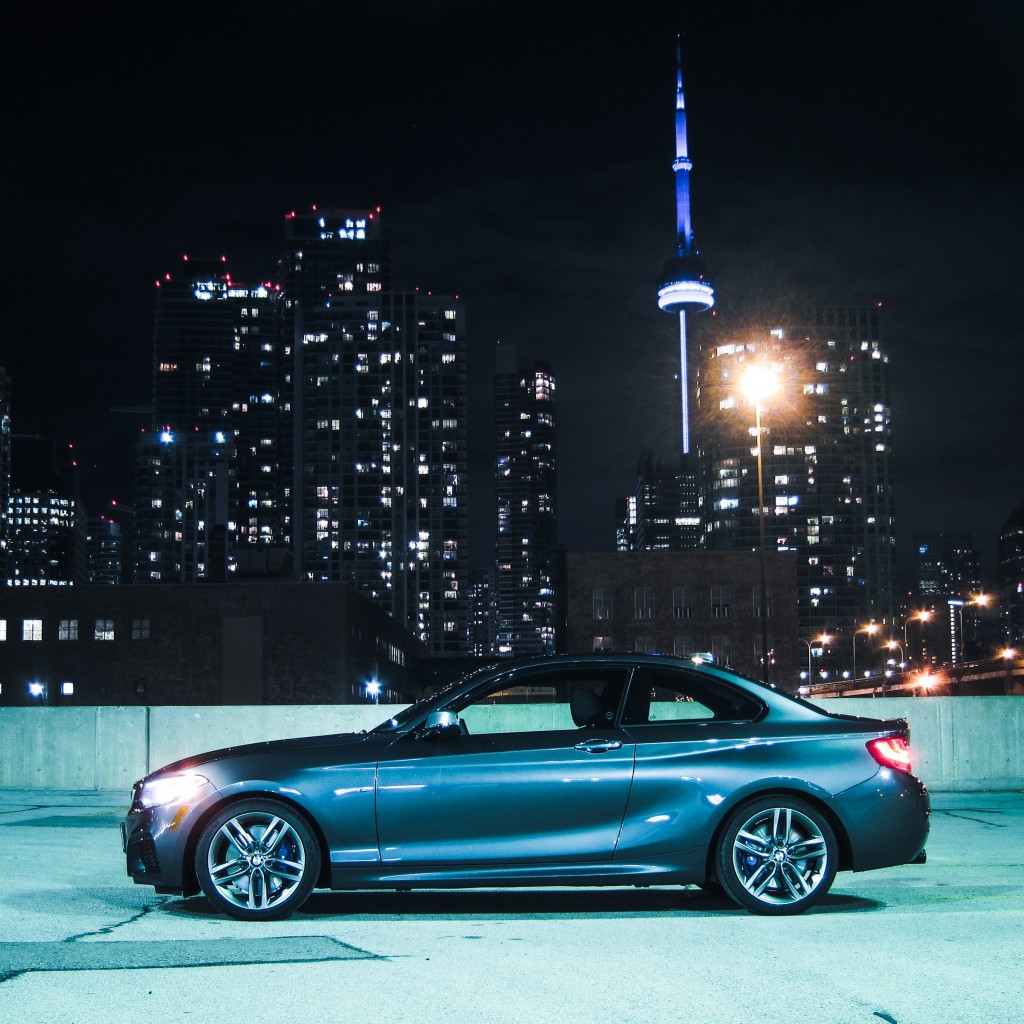 And that’s why I find the M235i so appealing, especially in its most basic form. While most M235is come fitted with BMW’s excellent eight-speed sport automatic, xDrive all-wheel drive, and a premium package that grows the iDrive control screen to cinemascope proportions (and throws in sensors, power assists, and cameras galore), you can still spec something much simpler. Shorn of all options save for metallic paint ($895), my M235i feels deliciously old-school: it has three pedals, a stick to row your gears with, and two driven wheels at the rear. Parking requires swivelling your head or using the mirrors, and while there’s a USB port and Bluetooth so you can connect your phone to stream music, the iDrive system is a lot less complex, with a small, matte-finish screen floating on top of the dashboard.

None of which is to say it’s poorly-equipped. Even without ticking any boxes, you get eight-way power seats (with two memories for the driver) that feature electrically-adjustable side bolsters to hug you tighter in corners. The basic iDrive still has a high-resolution screen and the sound system is surprisingly good. Like more expensive M and M Performance models, you get adjustable driving modes that let you adjust the response of the steering, throttle, and suspension (the best setup is sport throttle with the chassis in its more compliant mode). The important bits of the car – the seats, the three-spoke steering wheel with its tiny airbag, and the shifter – are wrapped in leather, and it feels very solidly made. 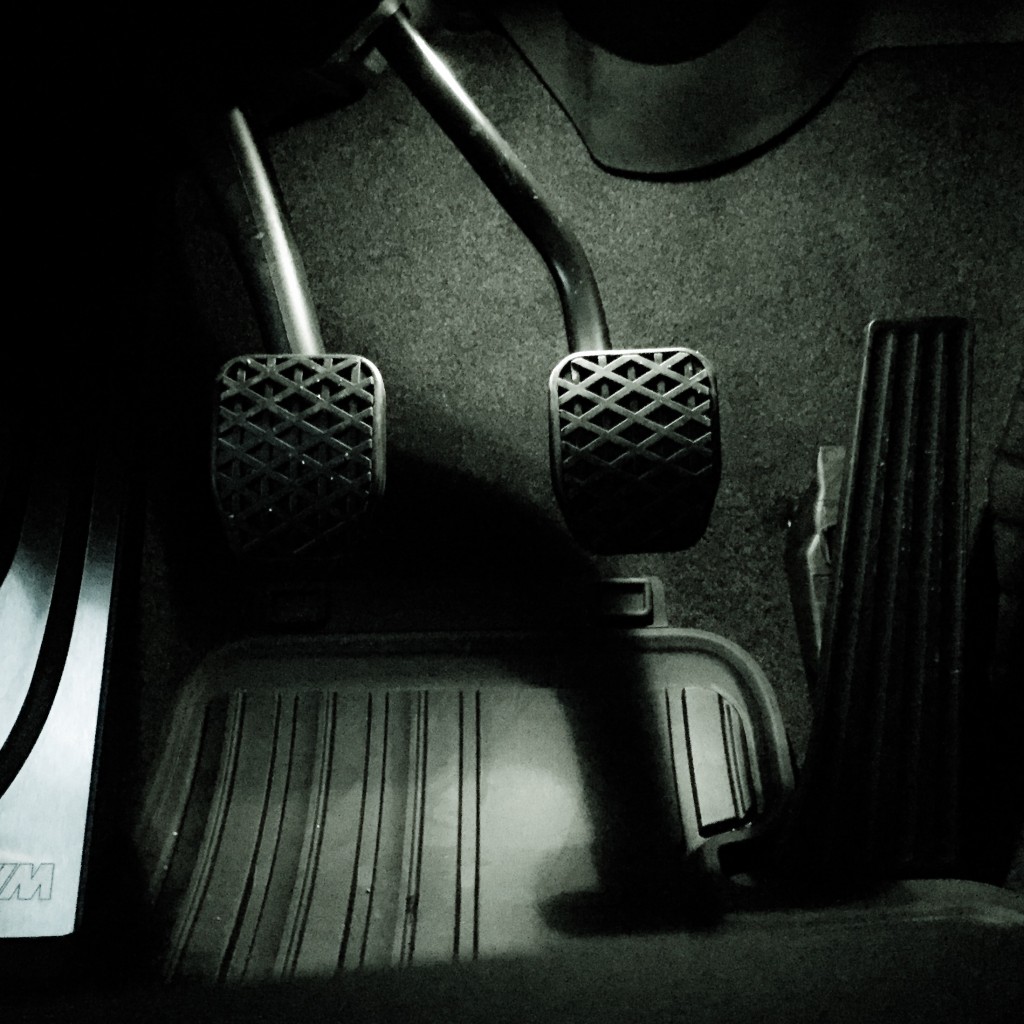 Much as I like all of that, none of it really moves me; even the most basic cars these days have sport modes and nice steering wheels and colourful infotainment. What they don’t have is a warbling, 322-hp straight-six under the hood that makes rowdy sounds when you start it from cold, and which plays the most amusing tunes as you climb up the rev range. Yes, it’s turbocharged, but the twin-scroll blower mostly delivers a smooth rush of power from just above idle right up to redline, and its power delivery mimics the way a big, naturally-aspirated engine feels. It’s an engine with real character, too: while there are four-cylinder engines on the market that deliver similar power output, there’s something special about the creamy, refined way the “N55” inline-six goes about its business. Its smoothness, distinctive sound, and big-car power elevate what is basically a small, economy-sized sedan and turn it into something a lot more serious, a lot more grown-up.

This is a car that really requires you to drive it. Granny-shift it from first to second in downtown traffic, and the engine bogs and balks, a reminder that you’re driving a powerful, turbocharged car that needs some revs to really work. The steering is accurate, but it’s also light and very quick, almost twitchy when you roll your wrists. The brakes, with four-piston, blue-painted monoblock calipers up front, are more sensitive than your typical BMW brakes, too, with a lot more initial bite (and a lot more stopping power when you’re into them fully). The shifter has deliciously short, slick throws, but requires a bit of effort to shove around – a perfect match for the muscular throttle response and fade-free brakes. 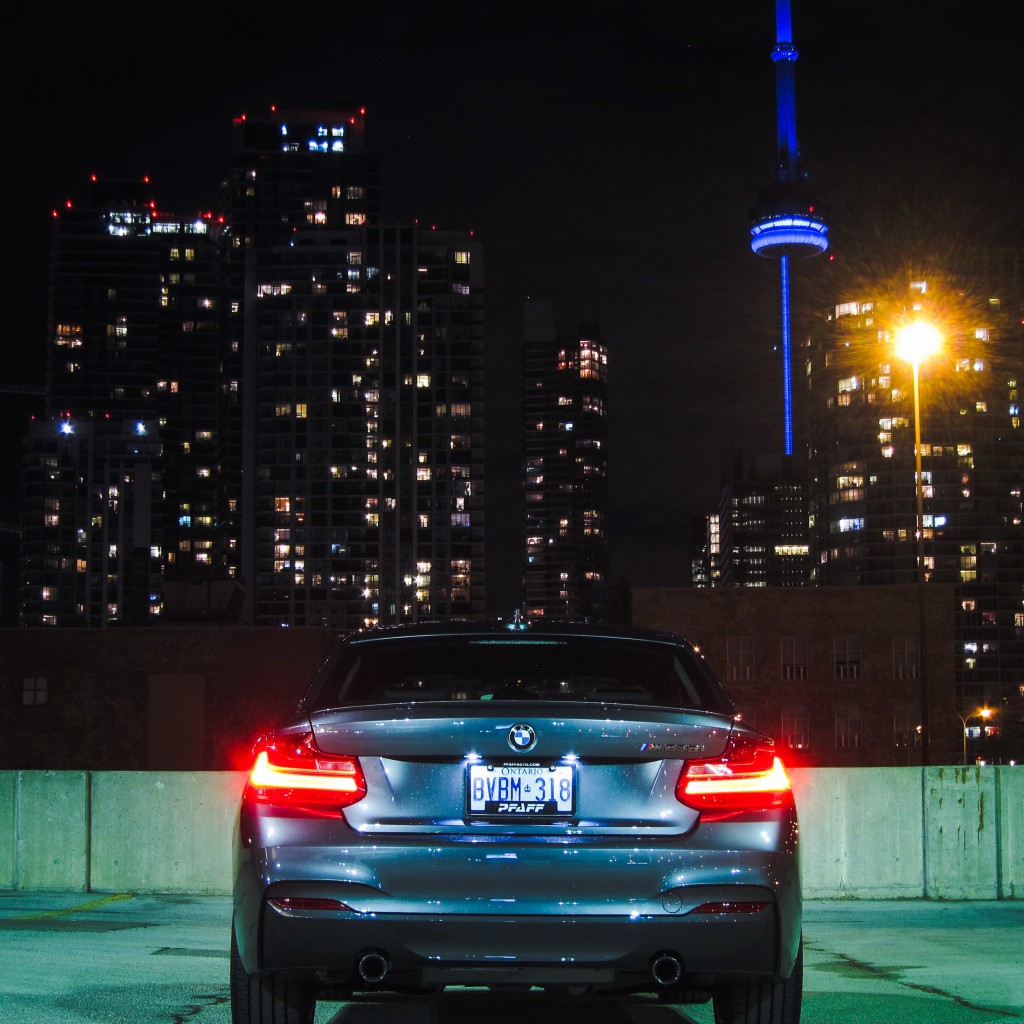 Fitted with non-run-flat Michelin Pilot Super Sports (you can order it with run-flat all-seasons, but who’d want to do that) that are 225 mm wide up front and 245 mm at the rear, the M235i is adequately-tired, but not over-tired. The skinny front tires mean the car has plenty of steering feel, and the modest rears let you switch off the traction control, crank up the big six, and enjoy a short skid or two (unlike a full-on M car, there’s no electronically-controlled limited-slip differential). The chassis, overall, is pretty brilliant: stable and easy to drive, with a bit of an edge to remind you that you’re driving something with a bunch of power and a relatively short wheelbase.

Perhaps most impressively, this is a car that rides really well, even when you’ve engaged the dampers’ sport setting. While all those adjustments (and all that power) mean that the M235i is a thoroughly modern car, there’s something in its nimble, fluid responses that makes it feel like the best old-school 3 Series – small, upright, practical, but amazing to drive, too.

It’s especially amazing in the context of the $45,200 base price, which is pretty insane value for something this powerful and competent on the road. But it also means that, outside of the stuff that contributes to the driving experience, the M235i does have its flaws. The interior, for example, is pretty spartan aside from the seats, wheel, and shifter: the plastics are solid and hard-wearing, but not nearly as nice as in a comparable Audi. The instrument cluster is pretty basic, with two big round instruments and an LCD screen that works as a trip computer and subs in for the fuel-consumption gauge and regeneration meter. And the dash and console look like they’ve been bolted together out of leftover bits from BMW’s parts bin: everything is nice enough, but there’s no real unifying flow to the whole thing. 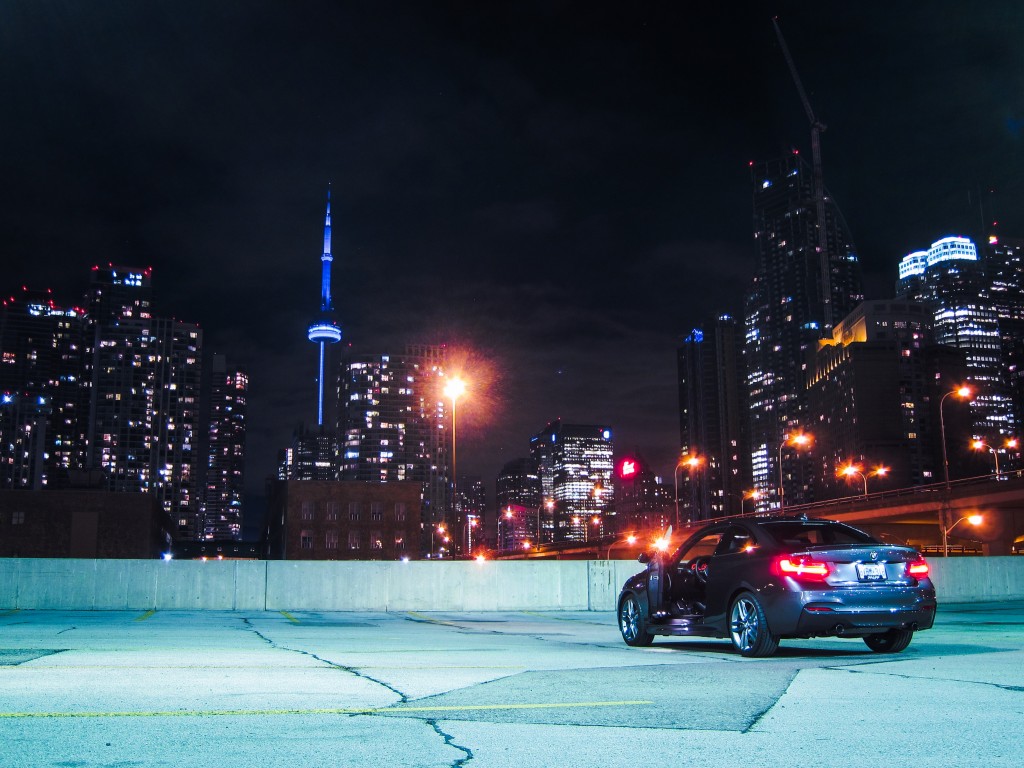 Finally – and this is more subjective on my part – I don’t find the M235i to be a particularly appealing car to look at. It’s a bit too tall for its length (though there’s lots of headroom), the way the crease in the side tries to suggest a bulge over the rear wheels seems contrived, and the stock ride height is a little high – something easily fixed by our friends at Pfaff Tuning. I guess what it amounts to is that its sedan-isn, almost boxy, proportions don’t even hint at the awesome, sporty driving experience that the car delivers.

Then again, that’s always been the case with little, sporty two-door BMWs. From the 2002 to the E21, E30, E36, and (to some extent) E46 3 Series, they were always practical, three-box sedans that just happened to drive better than any of their competitors, and as well as many much-more-expensive sports cars. Placed in that context, the M235i is their spiritual successor, a brand-new car with a warranty that channels the spirit of the great cars of the seventies, eighties, and nineties upon which the BMW legend was built.

Like those cars, you sacrifice a few luxuries for luxuries of a different sort: a big, powerful, engine brimming with soul; the precision and control of a manual gearbox and superb steering and brakes; and the thrill of steering something just brimming with character. The M235i isn’t perfect, and that’s why I love it so much.