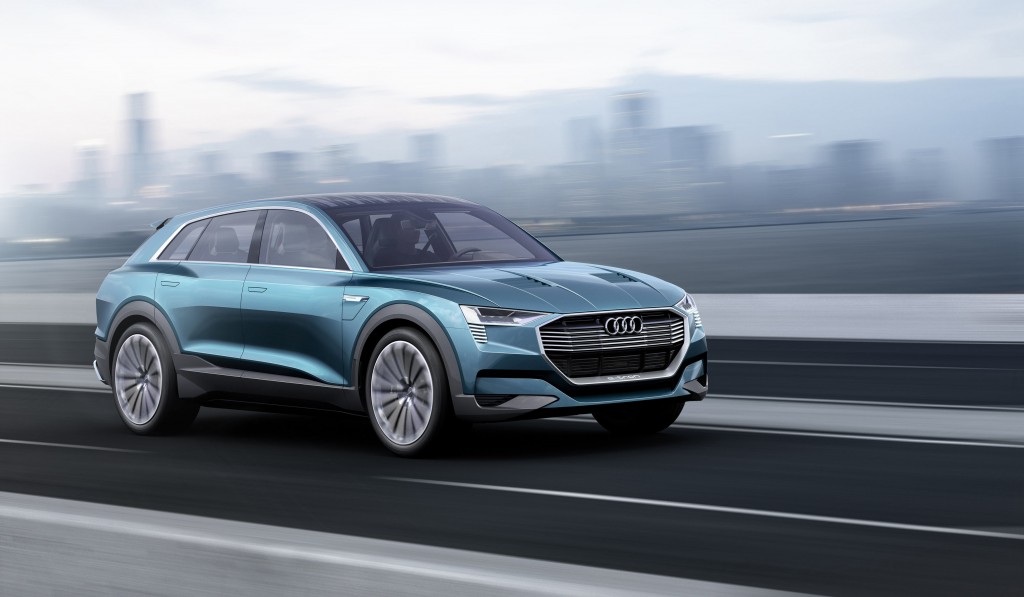 The new Audi e-tron quattro concept car, shown at the Frankfurt motor show, is the company’s statement about the future of electric mobility: It is sporty, efficient and suitable for everyday use.

It uses the power of three electric motors: One electric motor drives the front axle, the two others act on the rear axle. Total output is 320 kW. The driver can even mobilize 370 kW and over 590.0 lb-ft of torque temporarily while boosting, meaning that it performs like a sports car. When the driver floors the right pedal, the e‑tron quattro sprints from a standstill to 100 km/h in 4.6 seconds and quickly reaches the electronically governed top speed of 210 km/h. 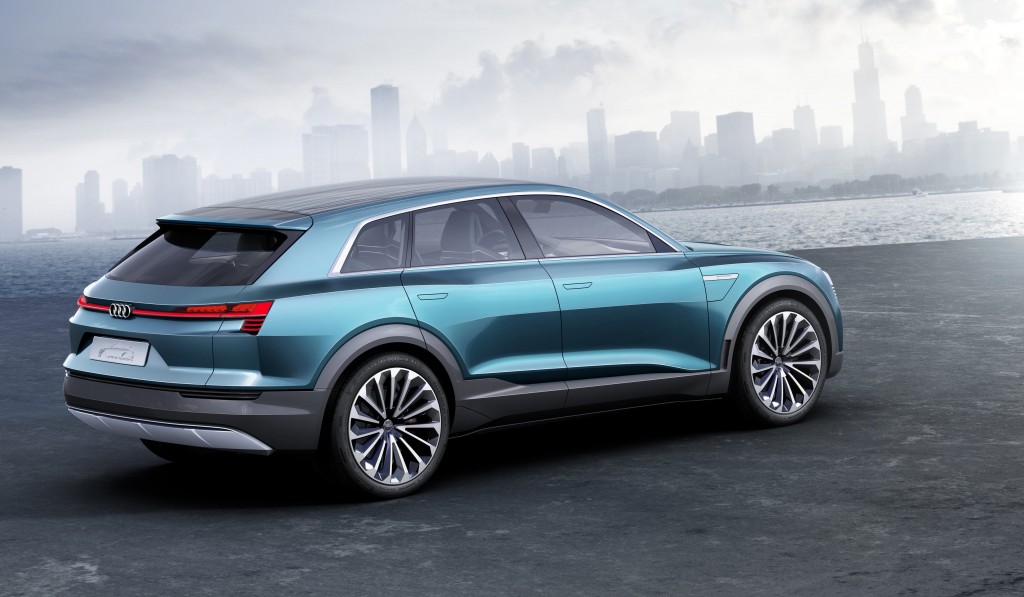 An intelligent drive management system controls the interplay between three electric motors as appropriate for the situation. The focus here is on the greatest possible efficiency. The driver decides on the degree of recuperation. During sporty driving on a winding road, the Torque Control Manager actively distributes the power between the rear wheels as necessary. This torque vectoring provides for maximum dynamics and stability.

The large lithium-ion battery is integrated into the floor of the passenger compartment. It gives the e‑tron quattro a balanced axle load distribution and a low center of gravity. The battery’s capacity of 95 kWh enables a range of more than 500 km. The Combined Charging System (CCS) enables charging with DC or AC electrical current. A full charge with DC electrical current at a charging column with an output of 150 kW takes around 50 minutes. As an alternative, the study is equipped with Audi Wireless Charging technology for contactless induction charging. Using a system for piloted parking that guides it to the proper position at the charging plate, the e-tron quattro can “find its own charge.” In addition, a large solar roof provides electricity for the drive system battery on sunny days. 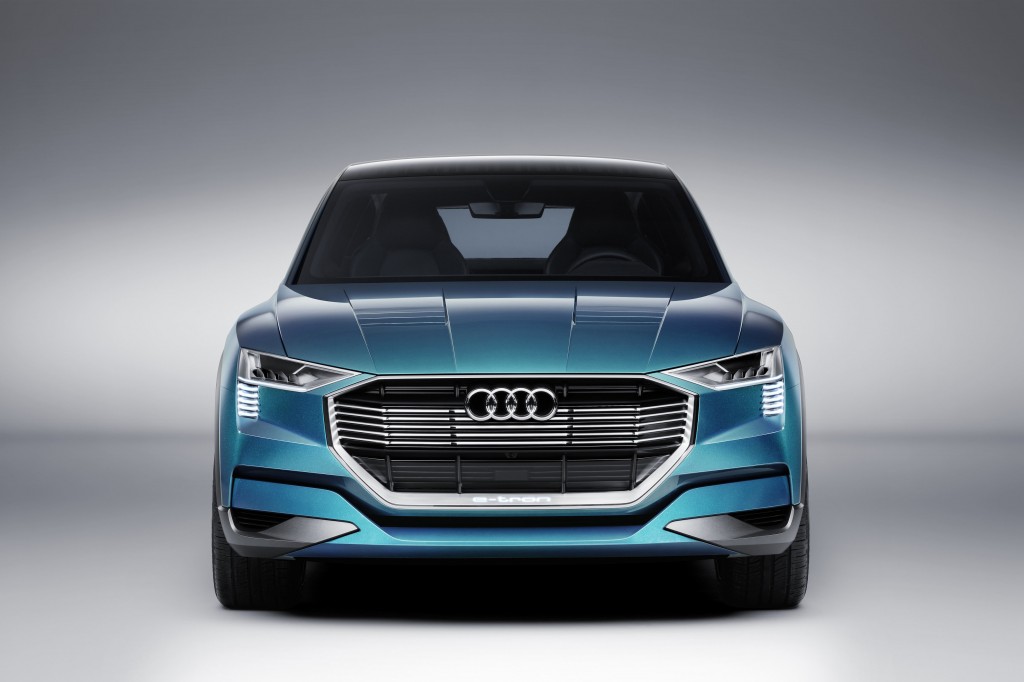 The chassis also expresses the high-tech character of the concept study. The adaptive air suspension, which features controlled damping, lowers the body at higher speeds to reduce drag. The dynamic-all-wheel steering combines a dynamic steering system on the front axle with a steering system for the rear wheels. Depending on speed and the driving situation, they steer either opposite or in the same direction as the front wheels.

This five-door technology study is 4.88 m long, 1.93 m wide and just 1.54 m high. Its coupe-like silhouette, with an extremely flat greenhouse that tapers strongly toward the rear, lends it a very dynamic appearance. The car’s drag coefficient measures just 0.25 – a new best for the SUV segment, where figures are usually considerably over 0.30. 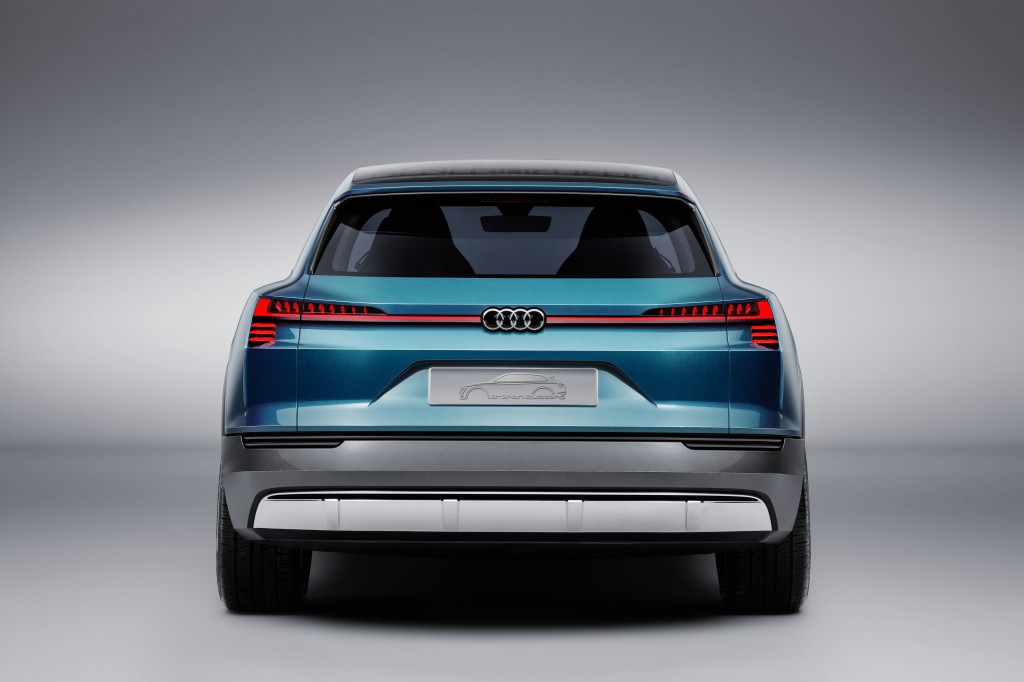 All of this contributes considerably to the long range of more than 500 km. At speeds from 80 km/h, electrically actuated aerodynamic elements on the engine hood, the flanks and at the rear end direct the flow of air as needed to improve the flow through and around the vehicle. This is one example of the intensive development work in the wind tunnel. Wind noise is low on board the car, and there are no engine noises in an electric car in any case. The fascination of electric driving unfolds in near total silence.

The vertical separating edges on the side panels and the fully enclosed floor pan with its newly designed microstructures contribute to reducing drag. Cameras replace the exterior mirrors – another contribution to the excellent aerodynamics and also a foretaste of the future of driving. 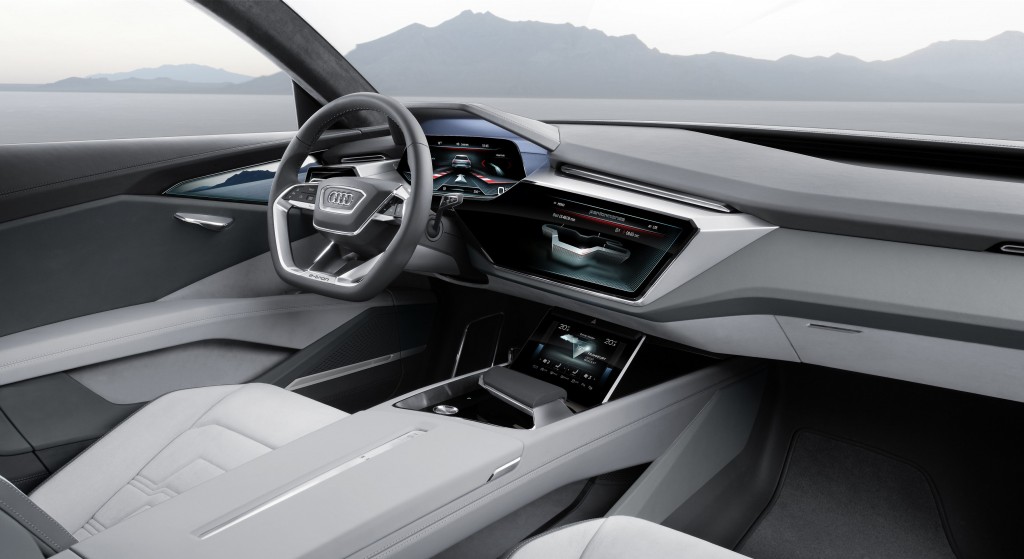 All the main lighting functions at the front of the car use Matrix laser technology. The bottom section houses a new, distinctive lighting signature comprising five lighting elements. Each of these combines an LED luminary with an extremely flat OLED element (organic light-emitting diode). Audi is developing Matrix OLED technology for use in production vehicles and is showing it for the first time in this car.

The package of the Audi e‑tron quattro concept enables a spacious, comfortable interior for four persons and 615 liters (21.7 cu ft) of luggage. The interior has a light and open feel to it; its architecture melds harmoniously with the operating and display concept. All displays in the interior use OLED technology. The extremely thin films can be cut to any desired shape. 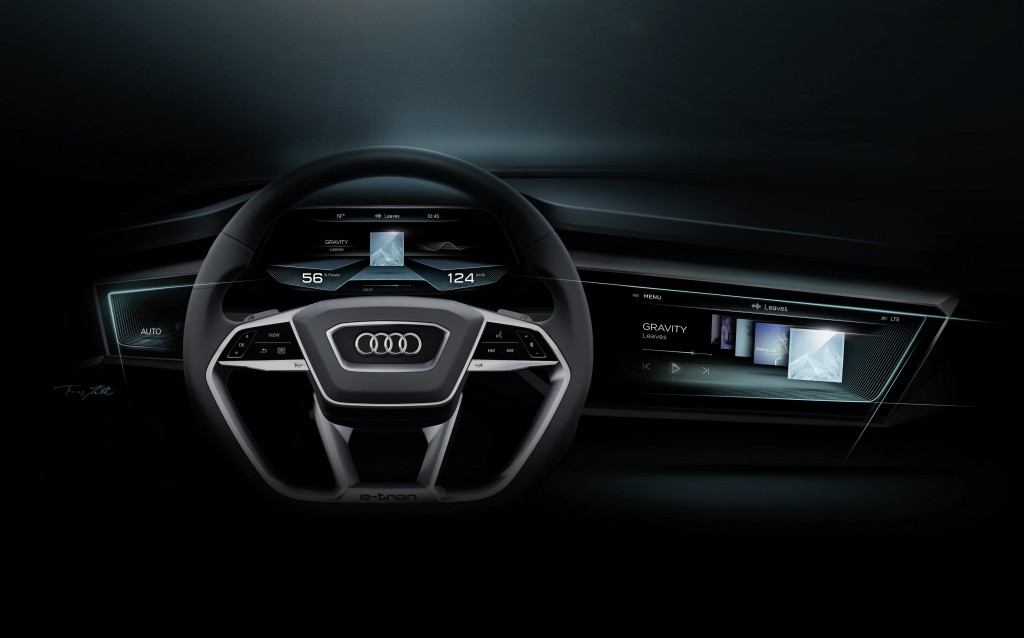 The new Audi virtual cockpit, with curved organic LED display, is a further development of the Audi virtual cockpit that debuted in production vehicles in 2014. To the left and right below the fully-digital instrument cluster are two touch displays with black glass and a subtle aluminum frame. The driver controls the lights and the systems for piloted driving with the left display. The large display on the right is for media and navigation management. The steering wheel serves as an alternate control level. Its spokes are equipped with contoured touch surfaces.

Below the selector lever on the centre tunnel console are two more OLED displays for the drive system status, climate control and freely programmable information functions. The curved displays in the front section of the doors serve as digital exterior mirrors.

The two rear passengers sit on comfortable individual seats. They can use the OLED displays on the center console to configure the climate control and infotainment for their area or to exchange data with the driver. An LTE module connects the Audi e‑tron quattro concept with the Internet. The connectivity features in the study are cutting edge. 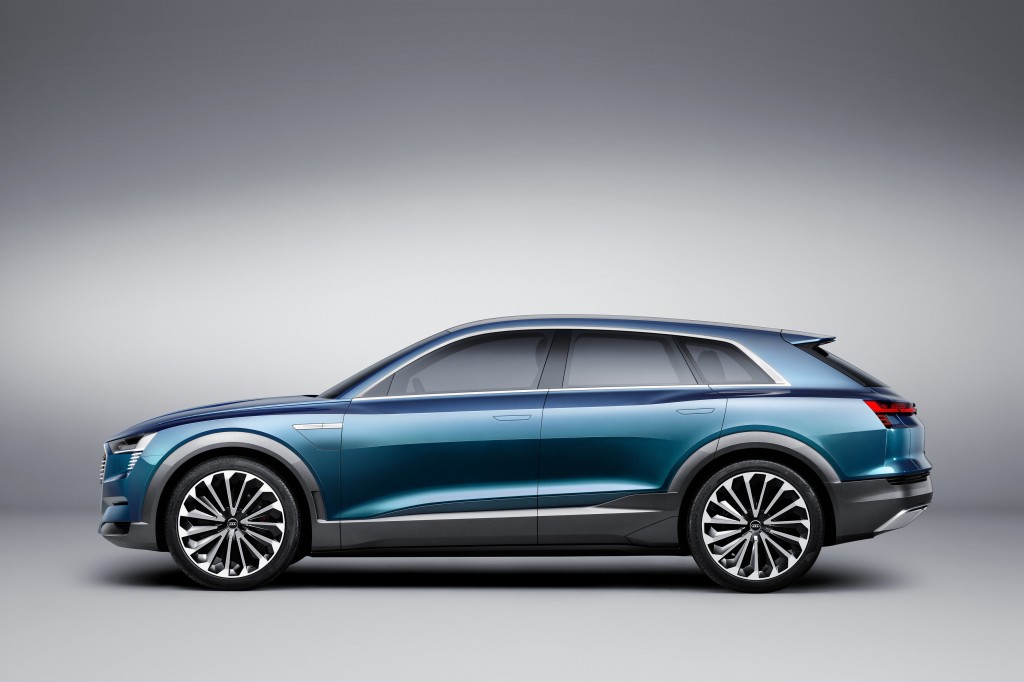