The Porsche Cayman GT4 is everything you dreamed of 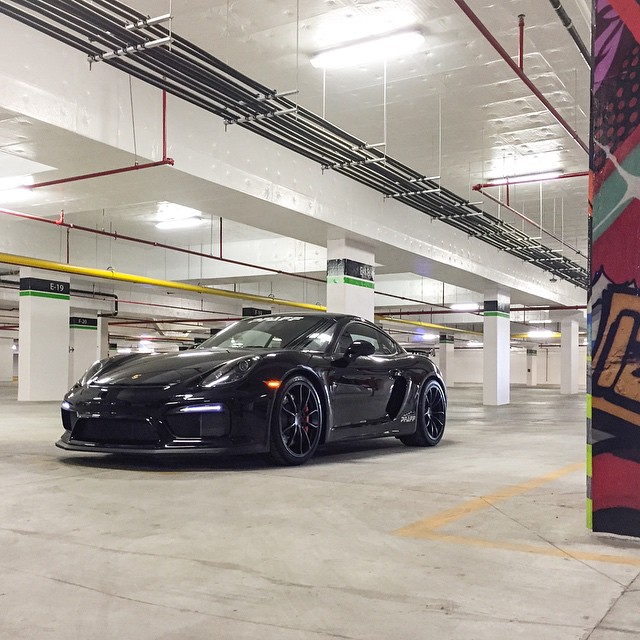 When I first read that Porsche was dropping a 3.8-litre 911 engine into the Cayman and creating a new model called the GT4, all my thoughts centred around speed. With 385 horsepower, GT3 suspension components, and the Cayman’s brilliant mid-engined chassis, it was always going to be a rocket on the road and racetrack. But the more time I spent with the GT4, the more I came to realize that its speed is actually the least impressive of its attributes. To say that about a car as fast as this is pretty remarkable – and an indication of just how amazing a car it really is. 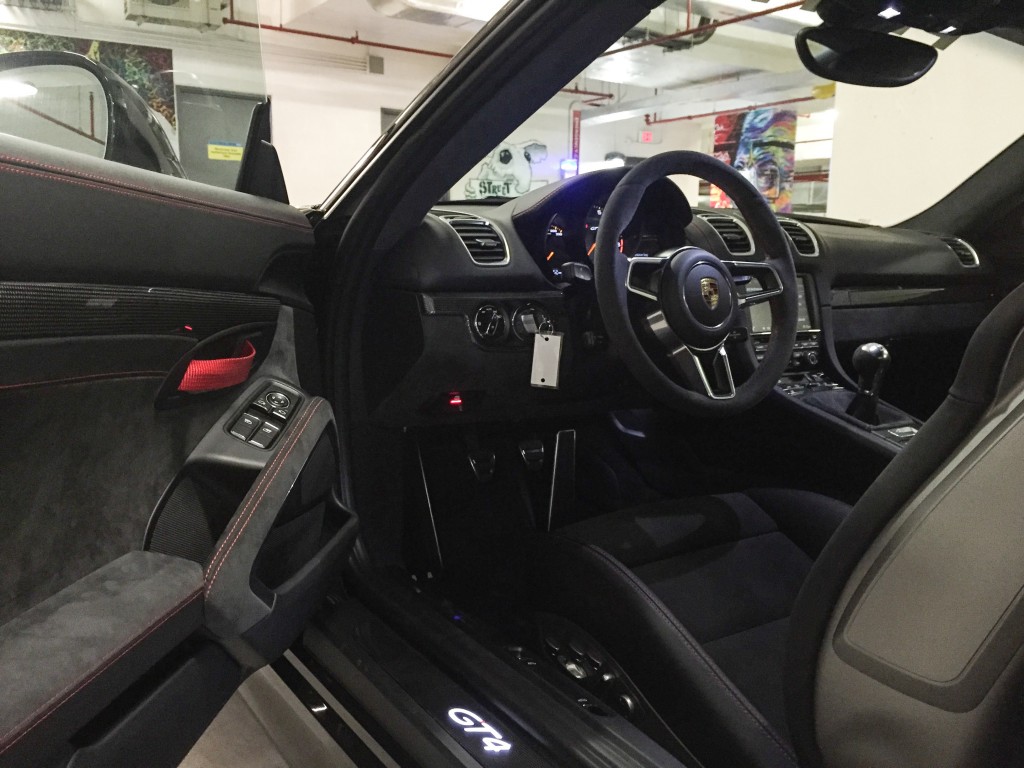 Oh, it goes fast all right; this is the first Cayman since the introduction of the model back in 2005 that will actually outpace a 911. The 3.8-litre flat-six from the Carrera S and a Cayman-specific sport exhaust system fit so tightly into the space behind the driver that there’s only room for a six-speed manual transmission; the seven-speed PDK won’t fit. Without the aid of an automated gearbox and launch control, the GT4 lunges hard off the line, cracking off the 0-100 km/h sprint in just 4.4 seconds. You need to be judicious juggling power and traction from the fat 295-section rear tires, but there’s so much feel coming from the chassis, the clutch, the gearbox, that you know exactly how much of that power you can deploy. 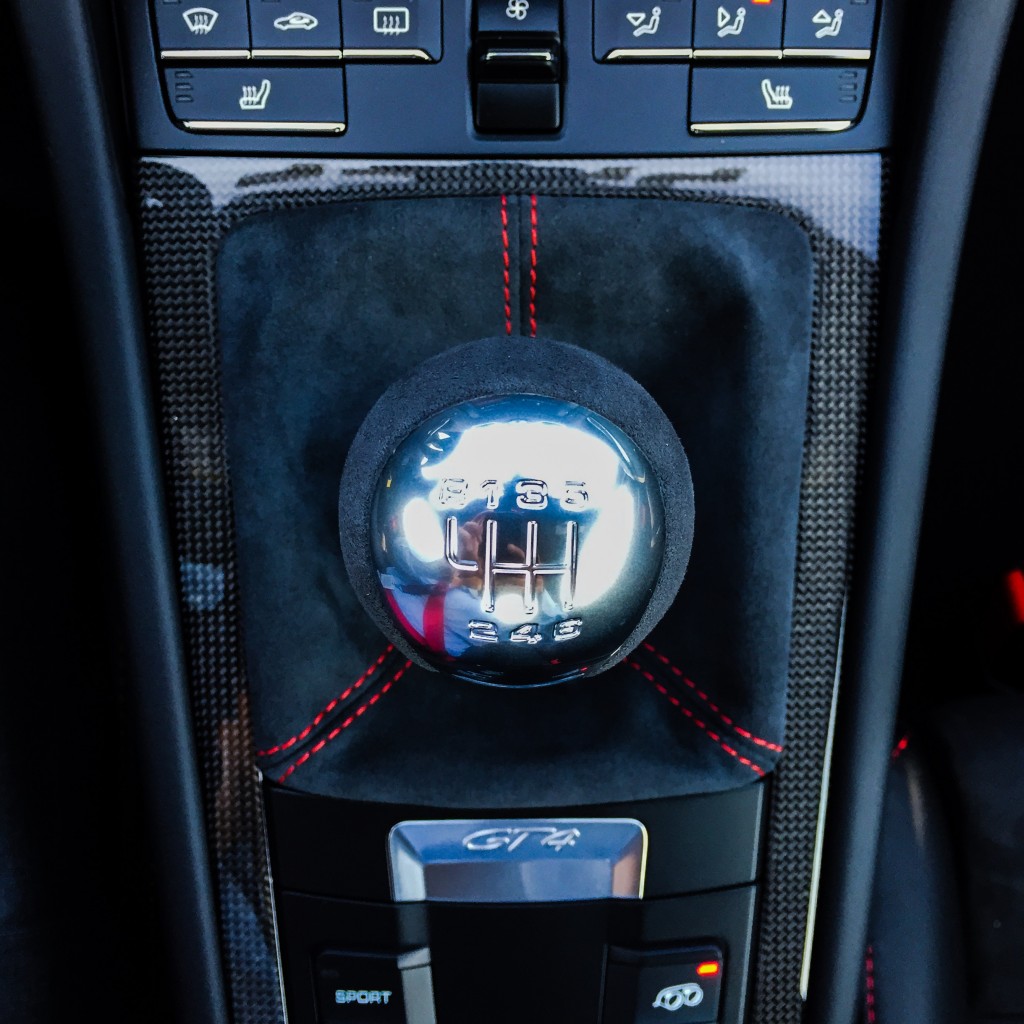 It is, indeed, the feel that defines this car far more than the power delivery of the 3.8, which is immense in such a light car. While the 911 GT3 has moved towards the digital in search of pure speed, adopting paddle shifters, rear-wheel steering, and an electronic torque-vectoring differential, the GT4 is willfully analog, with just you, the wheel, and the pedals controlling what it does on the road.

What makes the GT4 so special is the magic that has been infused into all of those controls by Porsche’s GT-car department. It’s not just the fact that the steering is perfectly weighted, or that it delivers so much detail that you feel like your hands are caressing the surface of the road itself. Or the fact that the brakes, with massive six-piston front calipers and four-piston rears, deliver such immense stopping power with such an amazingly linear feel. Or that the the six-speed shifter slides through its tight gates with more precision and accuracy than I’ve experienced in any manual gearbox, ever. Or that the clutch is so perfectly weighted. 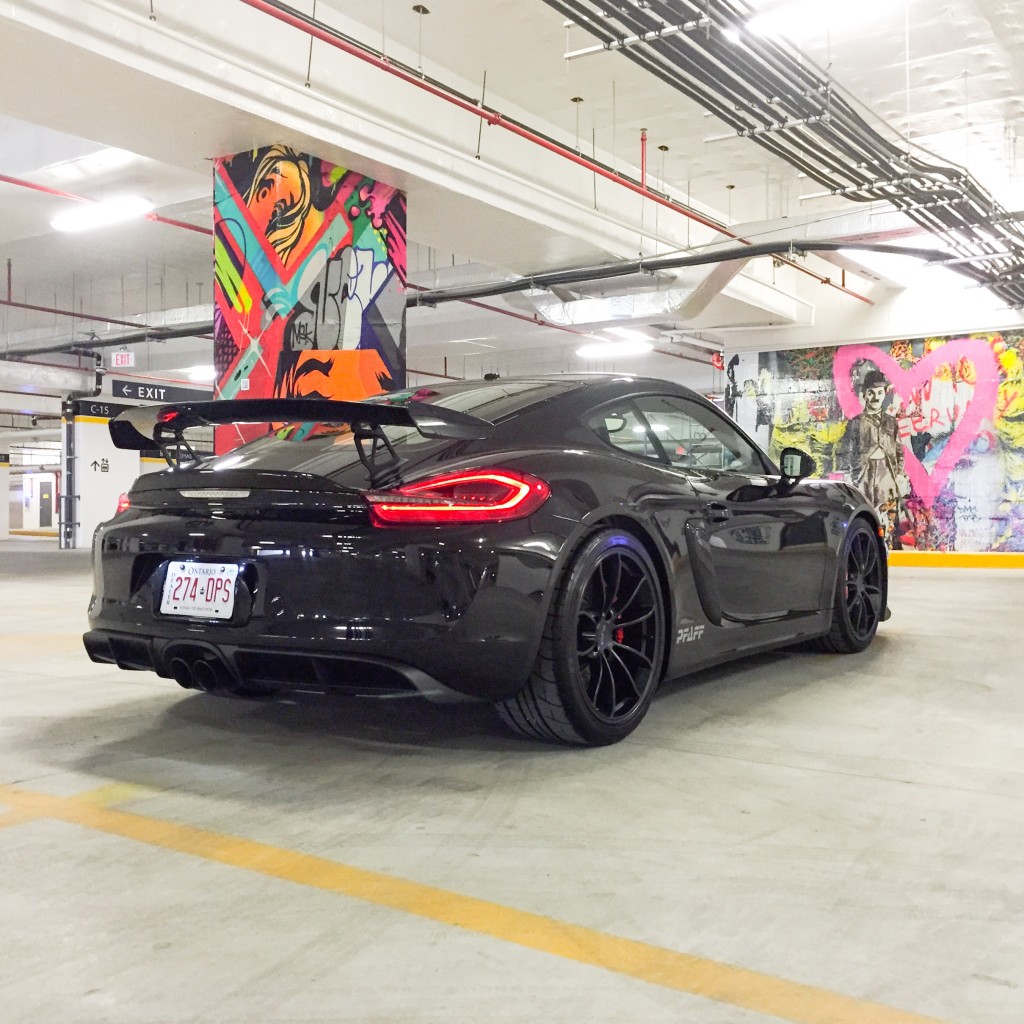 It’s how it all works together. Individually, each of the Cayman GT4’s major controls is already a standout, an object lesson from Porsche’s motorsport engineers in precision and perfection. It’s that they are all so perfectly matched to each other. It’s almost impossible to describe, but the way the steering responds so naturally to a twist of your wrists is somehow exactly the same as the way the shifter, less than a hand’s-width away, cracks through the gears. The gas, brake, and all work so fluidly, and with such a consistent level of effort, that you wish you had more opportunity to use them all; even with tightly spaced gears, you’re well into extra-legal territory once you’ve wound out the engine in the first couple of gears. 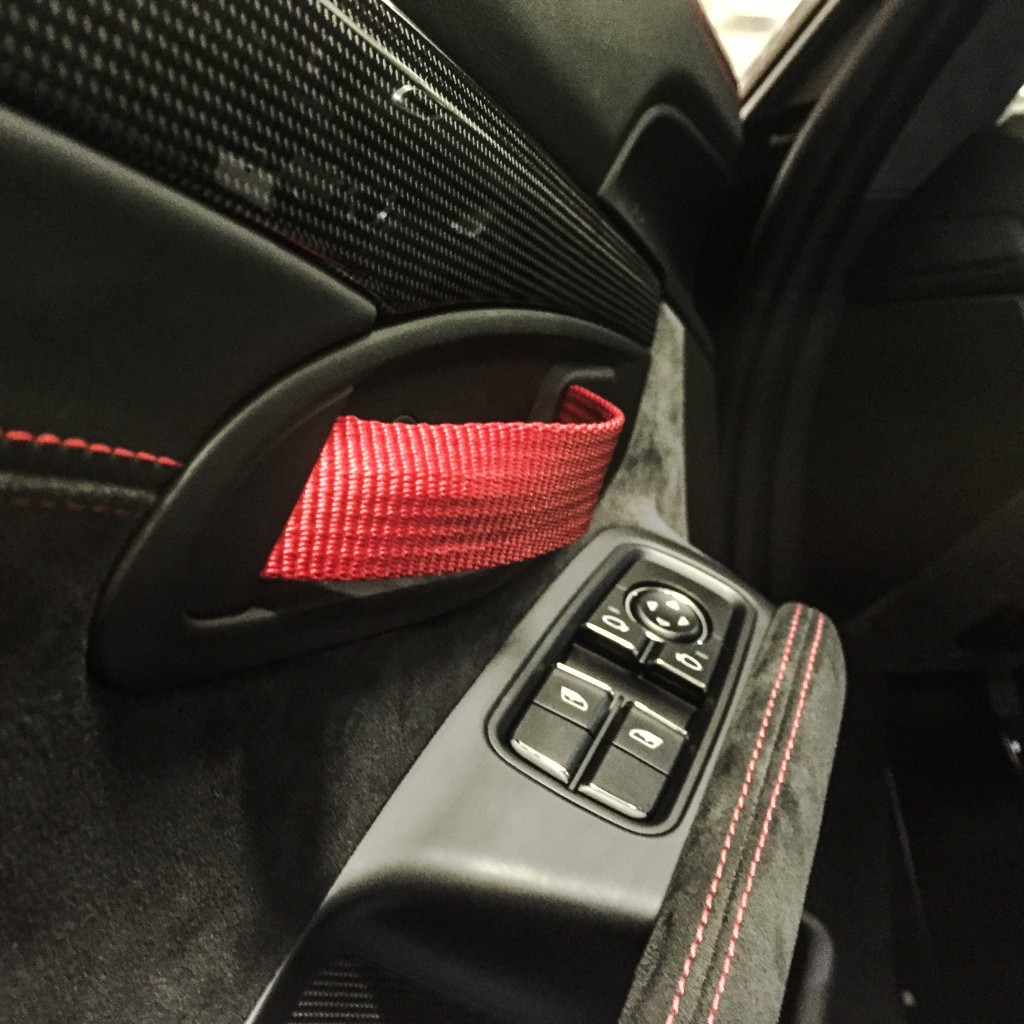 This is a brilliantly telepathic car to drive. Get it going on a good road, and you find your feet dancing on the pedals, your arms and wrists moving more fluidly and precisely than they’ve ever moved. For such an extreme car, with its big wing, big tires, aggressive front air dam, and low ride height, it rides remarkably well, shrugging off bumps in the road; for track use, you can stiffen up the suspension like you can in the GT3, but it feels so good in its regular mode that that function is almost superfluous. Turn-in is razor sharp, the throttle responds so sharply and precisely that you can adjust your cornering attitude by curling a little toe, and the braking is just awesome, full stop. 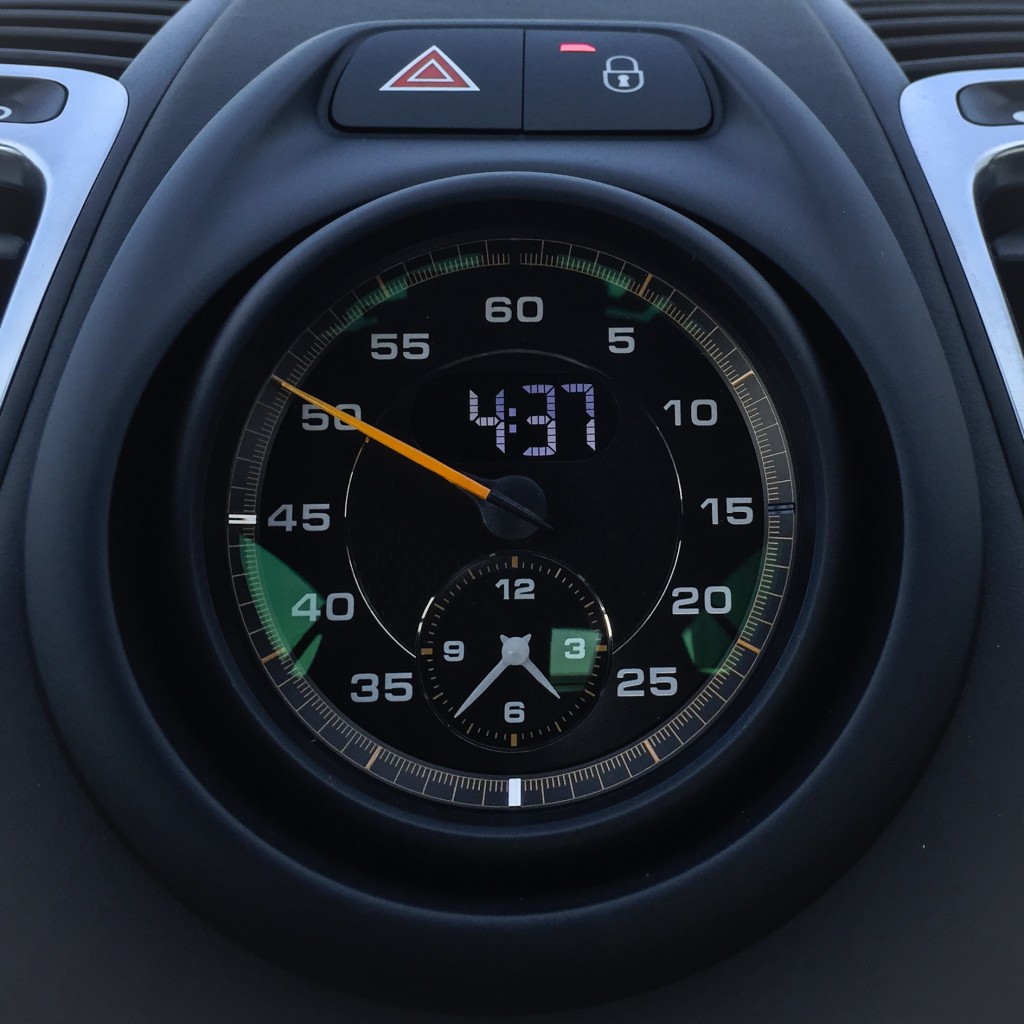 Despite producing 15 fewer horses than the Carrera S, the 3.8 feels a lot more special here, thanks to the crackling soundtrack of the unique exhaust and the position of the air intake just over your shoulder. It rushes to its 7,800 rpm redline with an addictive roar, and you find yourself cracking off shifts through the brilliant six-speed just for fun, and to make more noise. This is a car you drive with the windows open, with a serious smiley face on, so you can hear more of the noise and feel the angry chain-saw buzz of the engine more. 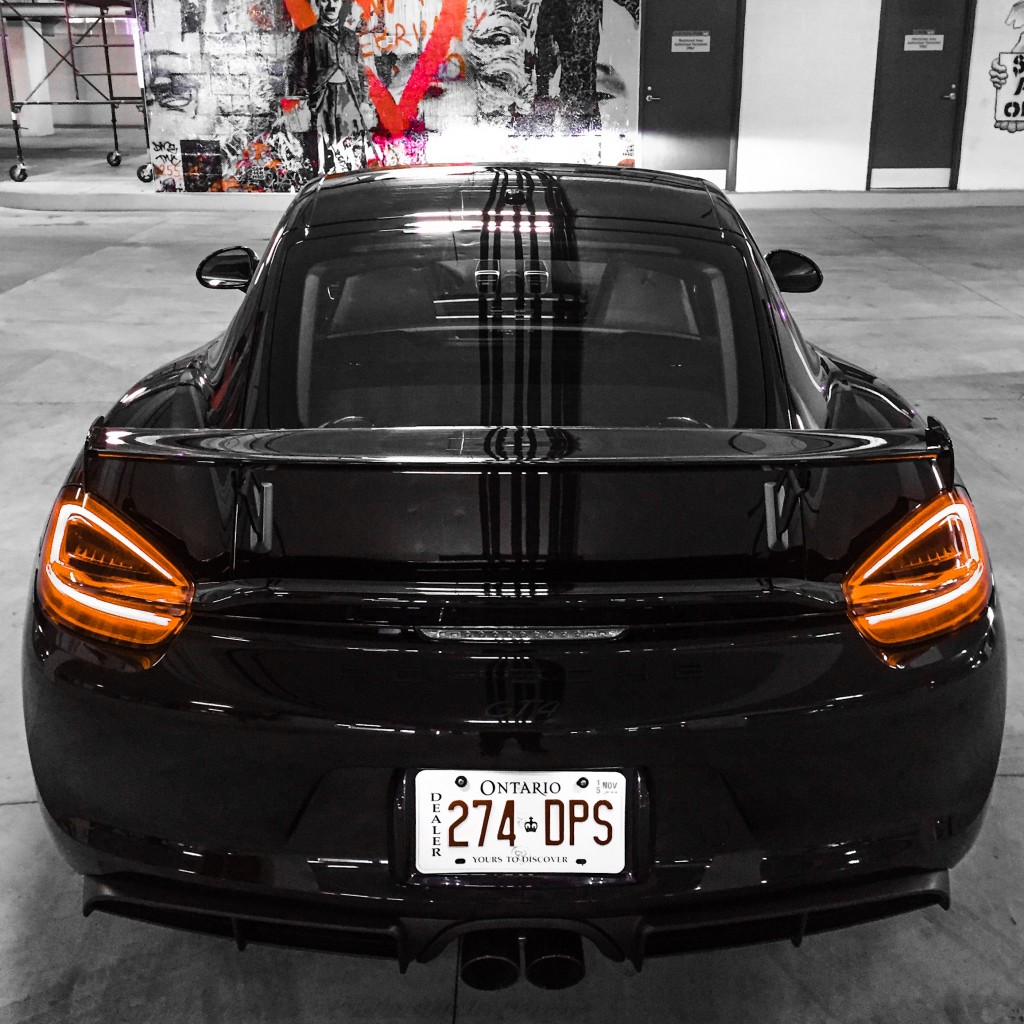 If it’s so perfect, why would you want a GT3, then? Well, for one thing, the GT3 is faster, full stop, thanks to more horsepower and its seven-speed PDK, which cracks off instantaneous shifts. Its rear suspension (the front is basically shared with the GT4) is more sophisticated, not just featuring bigger wheels and tires, but also an active rear-steer function that significantly increases its cornering ability. Then there’s the engine; as epic as the GT4’s feels and sounds, it’s lacking the last 1,200 rpm or so that the GT3 delivers as it rushes to 9,000 rpm, a final, manic jump in the power band that gives it as much edge as a GT3 Cup car.
Is the GT3 worth the extra $50,000 or so, transaction price to transaction price? That’s for you to decide. But one thing’s for certain: the Cayman GT4 is a pretty badass piece of machinery, and one of the year’s most exciting sports cars.
GT4 not for you? Get a Cayman of your own here.
Previous Post Next Post