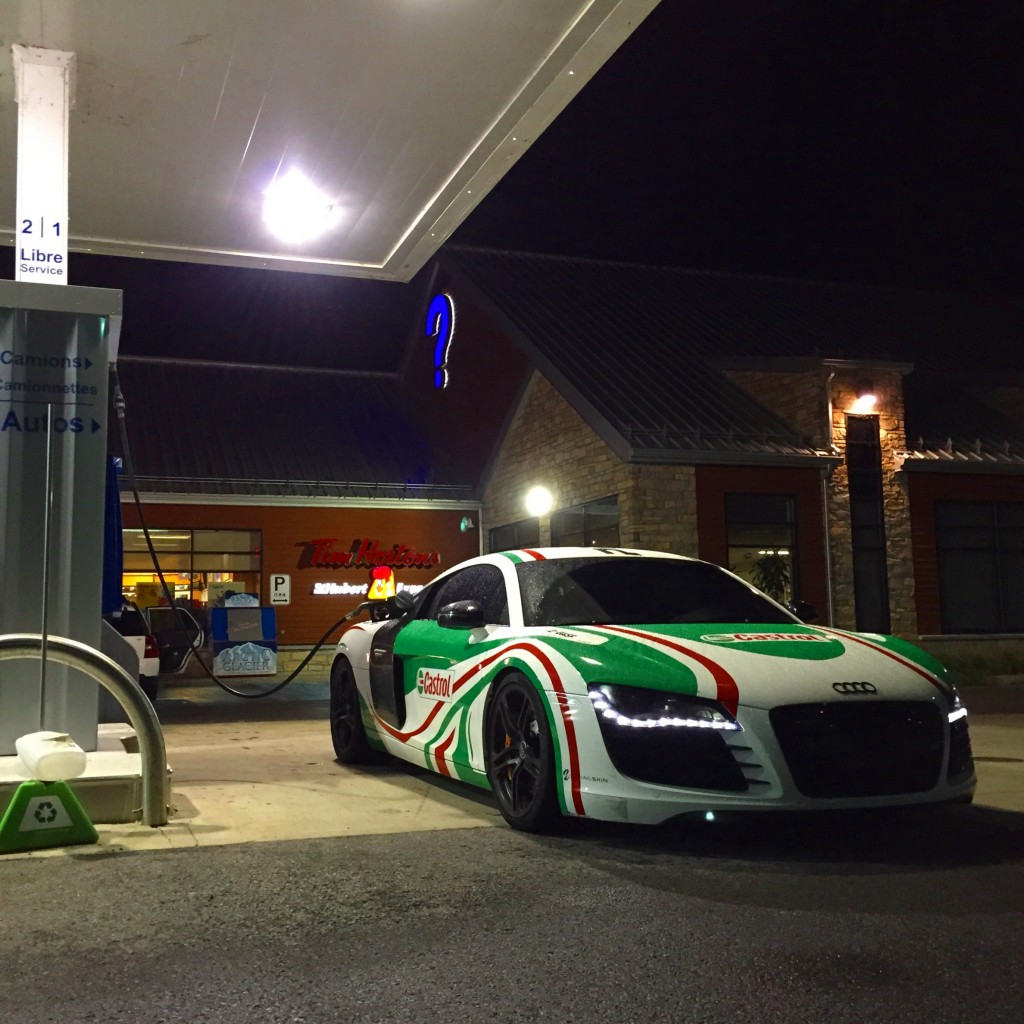 I can pretty vividly remember my first experience with Audi’s R8. The car had just been introduced to the Canadian market, and I was an auto journalist at the time; during a week-long test drive, I’d never felt like such a rock star. Crowds would form around the car everywhere I drove, mesmerized by its then-unique LED headlights, exotic proportions, and Audi badge. With a high-revving, high-tech V8, a lit-up engine bay, and those looks, it felt like it’d driven straight out of the future.

The R8 was a stunner to drive as well, with one of the friendliest mid-engined chassis I’d ever come across. Quattro all-wheel drive and magnetic dampers ensured it never had any issue putting power to the ground, while gorgeous steering and strong brakes made it a pleasure to tackle any road at speed. The crowning achievement was the engine, an operatic 4.2-litre V8 that delivered strong low-end torque, but whose noise built and built to an 8,000-rom crescendo. This car changed the game when it was introduced in 2007; it was a breath of fresh sports-car air, looking forward instead of backward, and offering refinement, ride comfort, and liveability along with its searing performance. 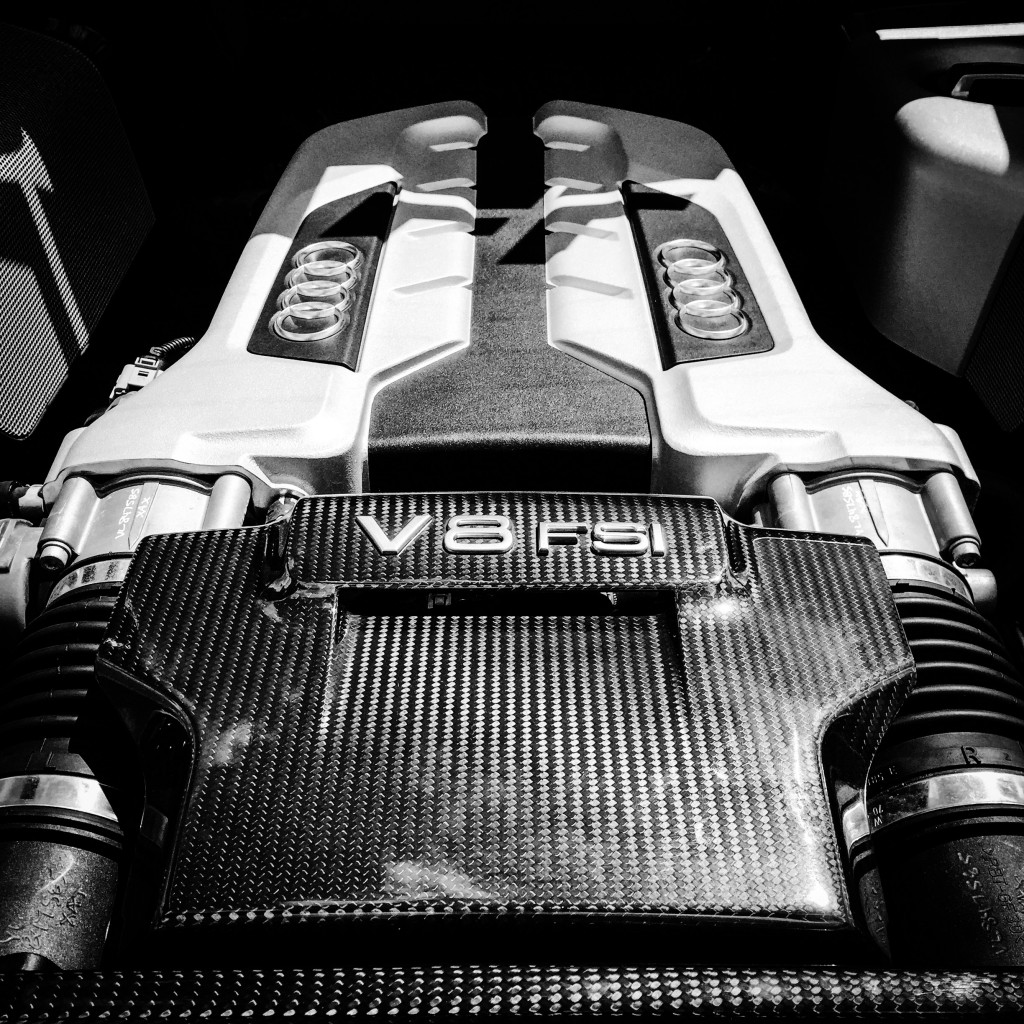 With the next-generation R8 just around the corner, I thought it would be interesting to take a second look at Audi’s original masterpiece. And with our Castrol-liveried track rental car needed at the Grand Prix de Trois-Rivieres (where it would be displayed in front of the company’s hospitality suite), I jumped at the chance to spend some time in a first-generation R8, to set the stage for the new car that will arrive next spring.
Most reviews of the R8 – my original included – understandably focus on the car’s sporting qualities, which it delivers in spades. Even eight years on (can it really be that long?), it still steers, handles, brakes, and accelerates with the best, and crucially, delivers that emotional hit that cars like this have to in order to be successful. 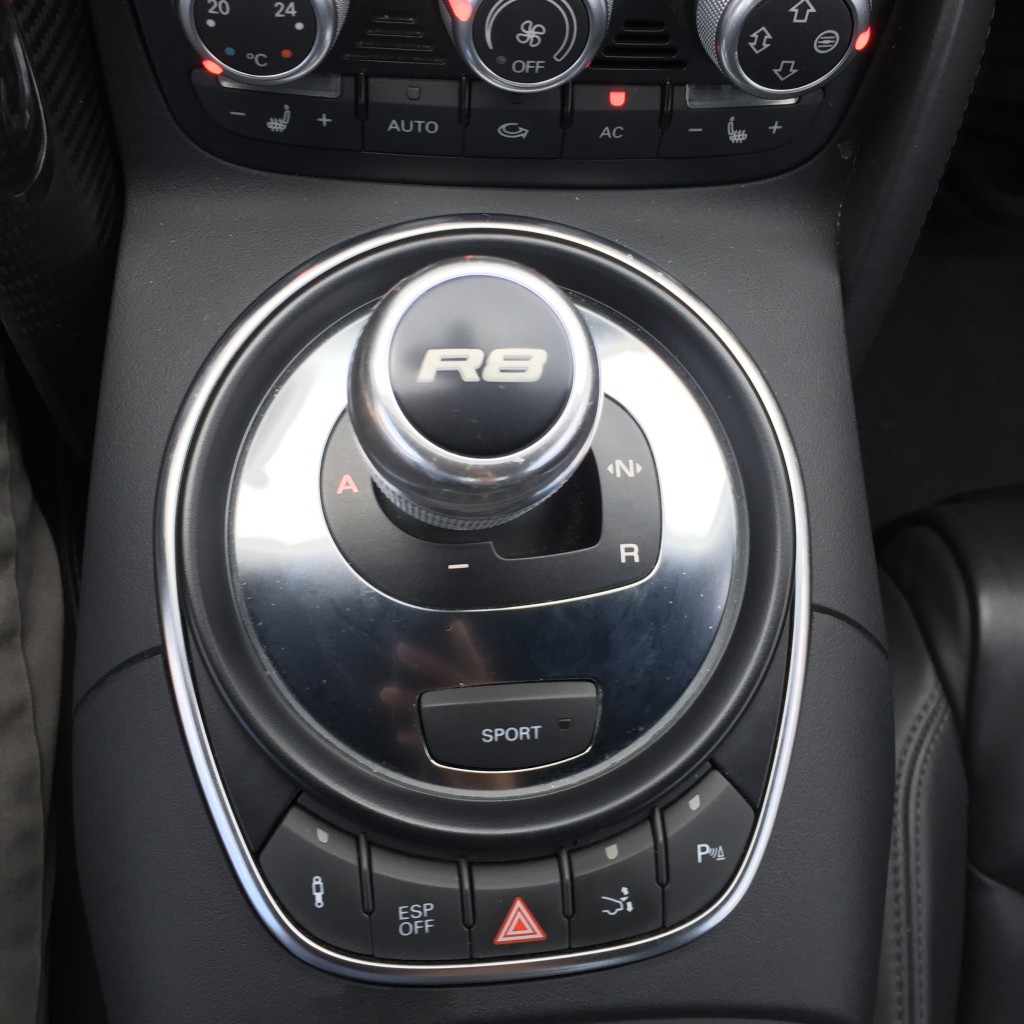 What you don’t read about much is the other side of the R8’s personality, its ability to chill you out as well as fire you up. This is, perhaps, its greatest achievement despite what it’s able to deliver as a sports car.
It starts with the car’s ride quality, which is exceptional for such a low-slung, high-performance vehicle. Despite the  massive 19-inch wheels and supercar ride height, magnetic ride control dampers mean that the R8 soaks up even the biggest bumps with ease. This makes a huge difference if you’re using it as a daily driver; it means you can tackle even rough city streets with abandon, with none of the trepidation that’s required from more exotic machinery. 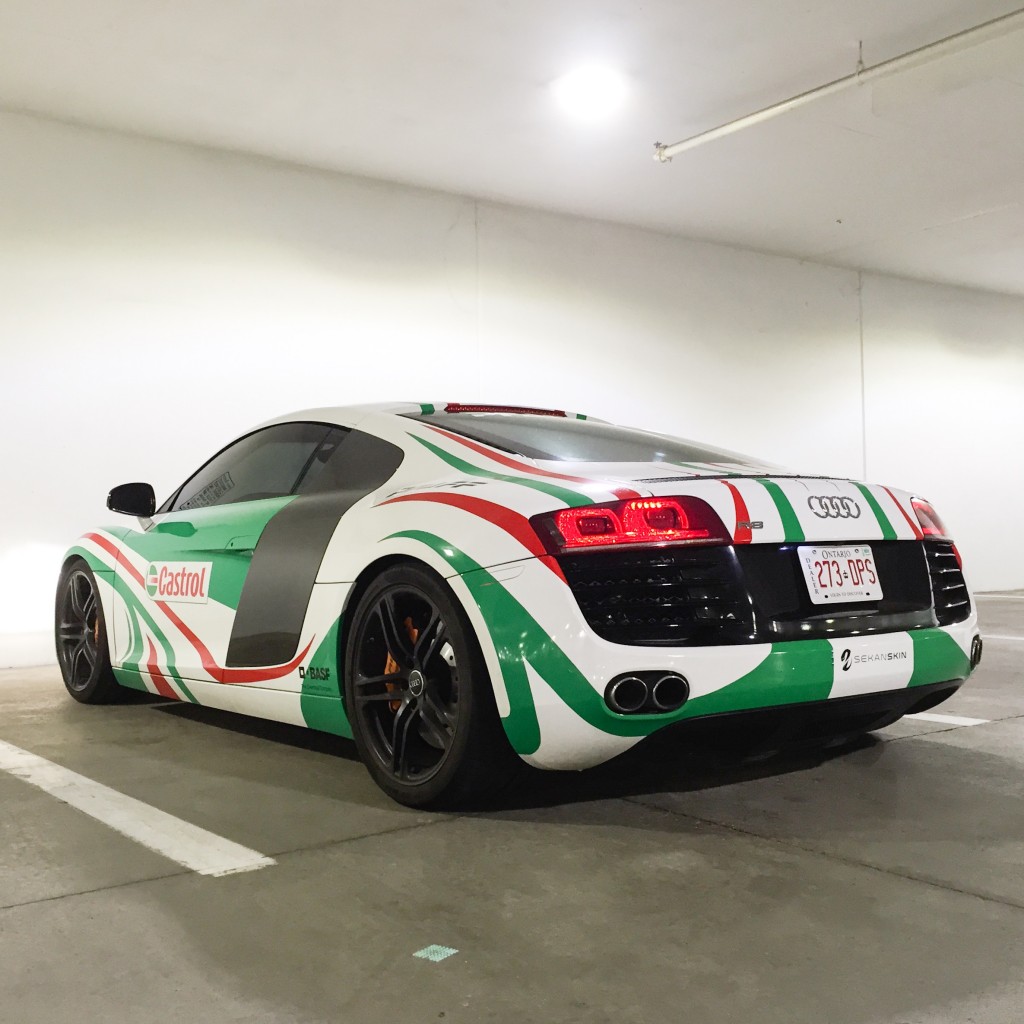 I remember being critical of the R8’s interior when it first debuted, citing its shared parts with other Audi models as a demerit. Eight years on, I’ve taken the opposite view. While the interior is perhaps not as different-feeling as you might expect from a car of this price or exterior drama, it does at least feature the excellent, intuitive ergonomics that you take for granted in all Audis. The instruments are clear and easy to read, flanking an LED multifunction display controlled by a stalk; the MMI controller is right where you would expect it, and the climate and other minor controls, stolen from the TT of the time, are simple and easy to use.
Moreover, the cabin is exceptionally spacious, with stretch-out legroom, plenty of seat travel, and excellent visibility all around. The trunk is large enough for a regulation-size carry-on suitcase and a couple of small bags, and there’s plenty of storage space inside, with a large console bin, door pockets, and other cubbies to hold your road-trip detritus. It’s all built with Audi’s customary solidity, too; with over 40,000 hard-driven km on the clock (many of them on the track), there wasn’t a squeak or rattle to be heard. 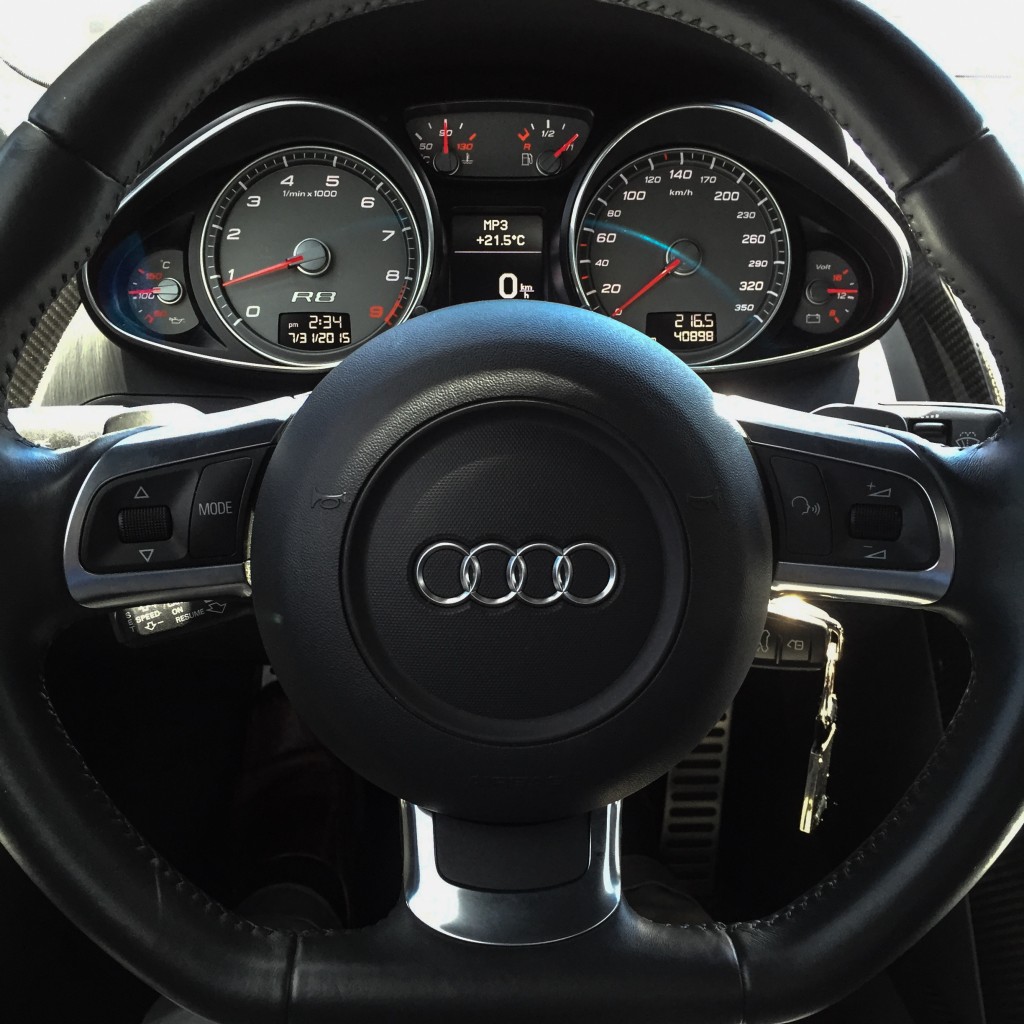 As a measure of the R8’s comfort and ease of use, consider this: I usually begin to get fidgety after a couple of hours behind the wheel of every car, but I was able to do the drive between Toronto and Trois-Rivieres, over 700 km away, in two long lunges, including almost two hours of sitting in rush-hour traffic. The seats don’t look like much, but they’re excellent, with multiple adjustments and a power lumbar support. Road and wind noise levels are surprisingly low, and when you’re cruising, the engine is hushed as well, humming away behind its glass partition. The Bang & Olufsen stereo pumps out clear, clean tunes, and the interior lighting is soothing.
The R8 is efficient, too. Despite its 8,000-rpm capability and 420 horses – and despite reading 3,000 rpm at a highway cruising speed – the 4.2-litre V8 delivered average fuel economy of just over 10 L/100 km, which included a lot of puttering around downtown Trois-Rivieres and sitting in long lines of traffic. A 75-litre fuel tank meant that I could do both the outbound and return trips without refuelling; on the run home, I logged 698.1 km before the fuel light came on, indicating that I was dipping into the car’s fuel reserve. 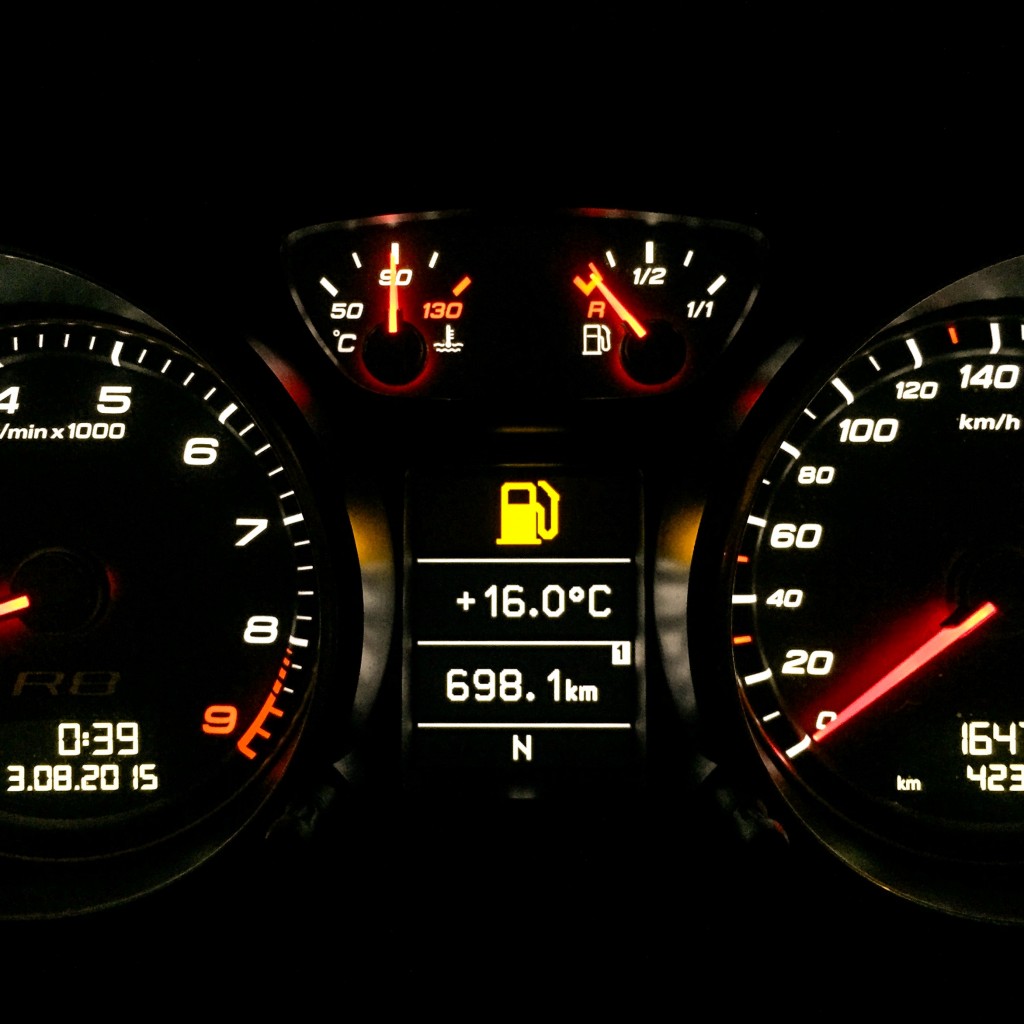 Back in Toronto, and with a long-weekend Monday to burn before I had to give the R8 back, I headed out onto some of my favourite roads during my day off and rediscovered why I fell in love with this car in the first place. Yes, it cruises effortlessly, and is a great long-distance car. But it’s the confidence-inspiring handling, the almost unending grip, and that five-octave, high-revving engine that continue to make it one of the world’s best sports cars. 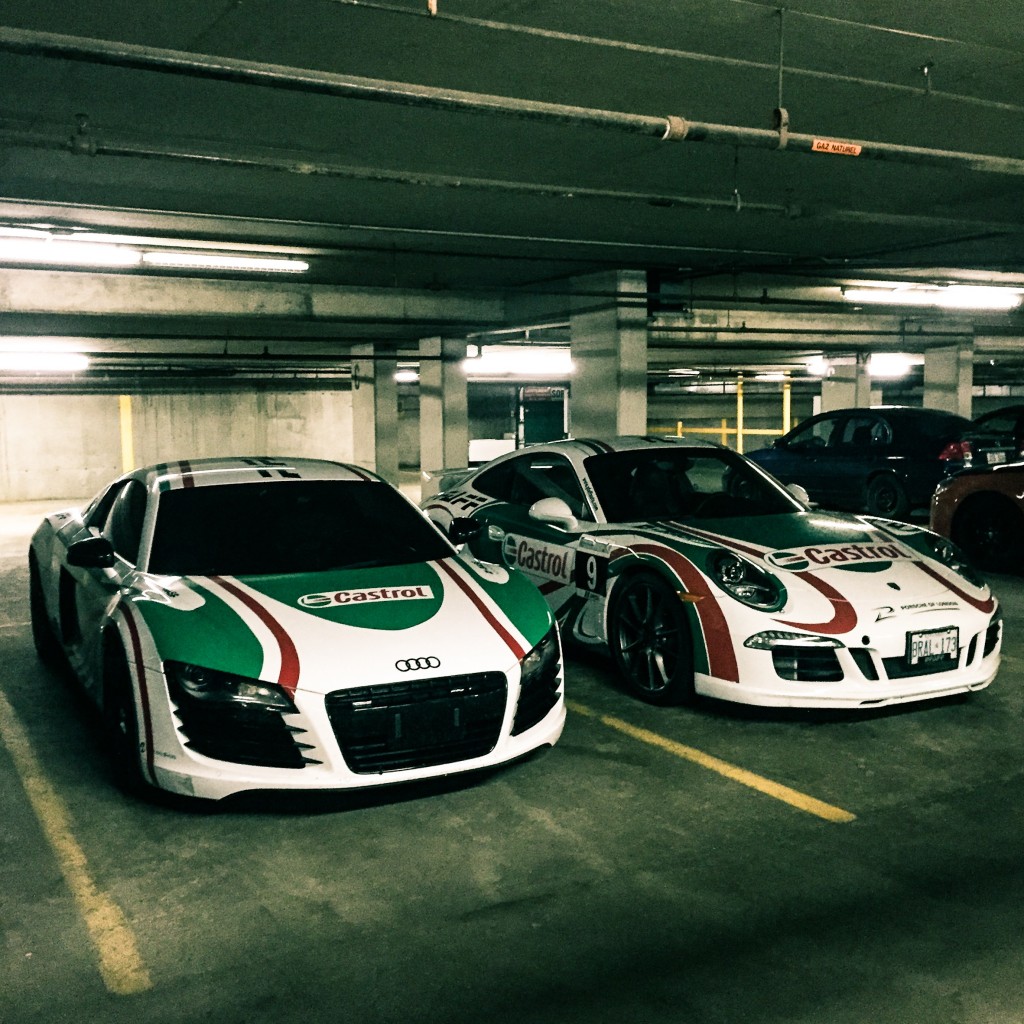 Heck, even the R Tronic automated manual gearbox – later, post-facelift R8s had a much smoother dual-clutch S Tronic – comes into its own the harder you’re going, snapping off the crisp, instantaneous shifts that seem to escape it at lower levels of aggression. Pop it into sport mode, work the paddles or the shift knob manually (reaction times with the latter seem to be marginally better), and it feels like a racing car, ripping and snorting its way around the most challenging curves.
Eight years on, then, the R8 is still Audi’s masterpiece. The new one has a great legacy to live up to.
You can rent and drive this Castrol R8 at the next Pfaff Track Day.
Previous Post Next Post