A very special Z4 GT3 for Zanardi, Spengler and Glock 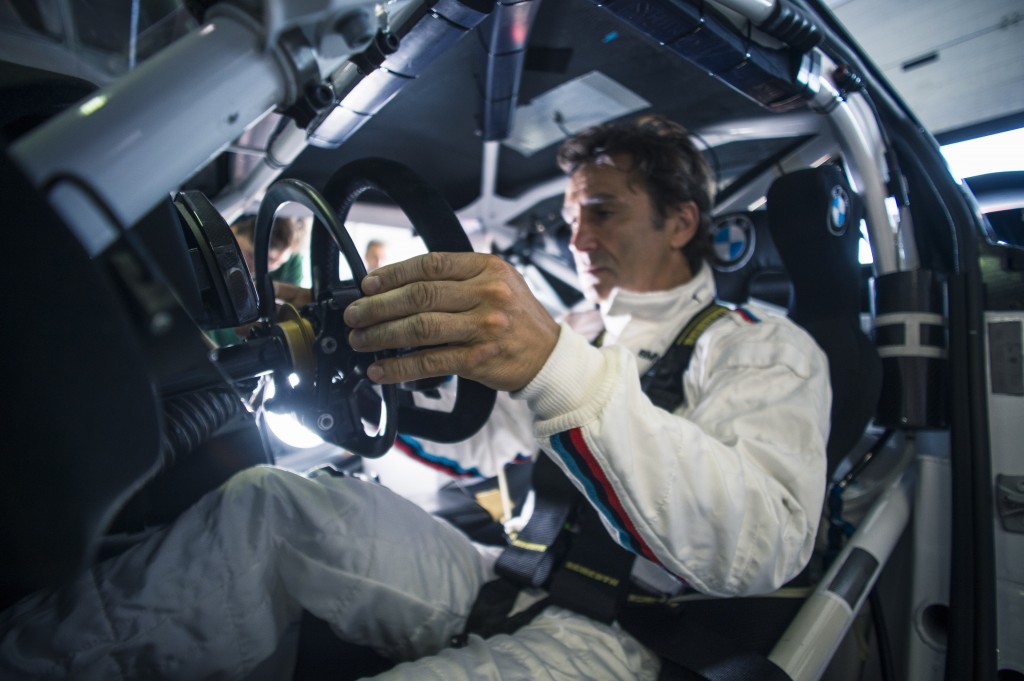 The staging of the traditional 24 Hours of Spa-Francorchamps marks a milestone in motorsport. For the first time, Alex Zanardi, who has had both legs amputated, shared the cockpit with Bruno Spengler and Timo Glock, two drivers who are able-bodied. The project is unique and very special for BMW Motorsport. Over the past few months, a team of nine engineers have developed numerous technical solutions that allow three drivers to race over the 24-hours, and to make the driver changes between one handicapped and two able-bodied drivers in the shortest possible time.

Modifications were made in the following areas: pedal box, clutch, steering wheels. In addition, the engineers optimised the seat’s position, installed air conditioning and found a new solution regarding the engine software. In total, the development time has been five months.

BMW Motorsport used the base chassis raced by Zanardi last year in the Blancpain Sprint Series, but completely revised and optimised it. When rebuilding the car, the engineers used some of the existing components, but most of the parts are new. So, in fact, the BMW Z4 GT3 is a completely new car.

From its basic design, the car is the same as all the other BMW Z4 GT3s in racing. BMW Motorsport just did the modifications which allow Zanardi to drive the car. All other components are as homologated. Modifications were made in the following areas: pedal box, clutch, steering wheels. In addition, the engineers optimised the seat’s position, installed air conditioning and found a new solution regarding the engine software. 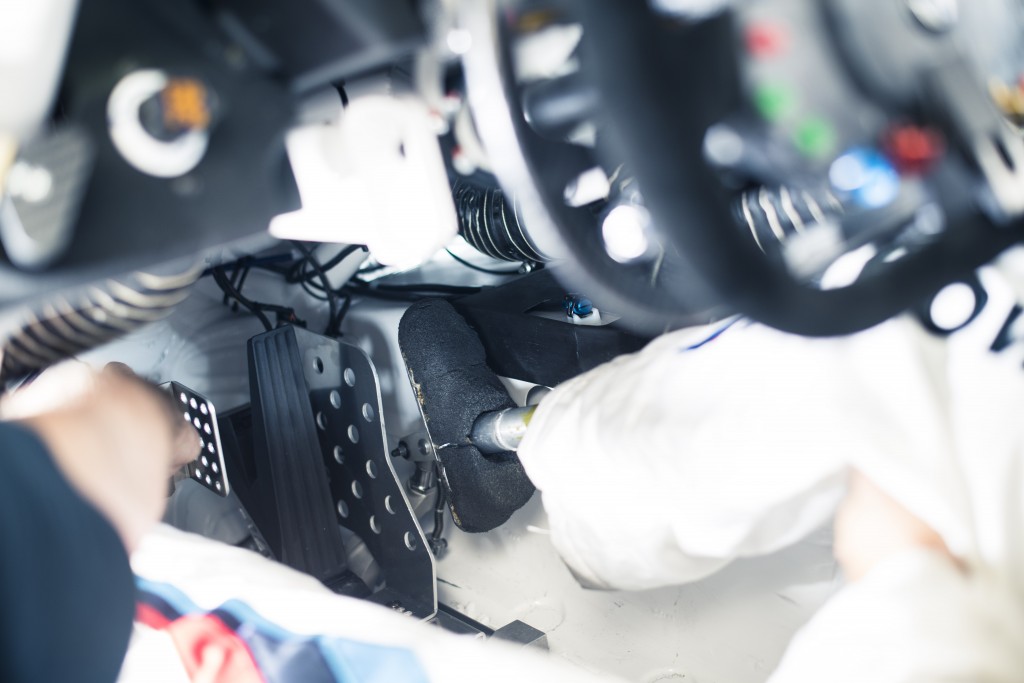 The needs of all three drivers are fulfilled: Zanardi needs to have his pedals as far apart as possible, while Glock and Spengler need them as close together as possible.

Last year, Zanardi used a normal brake pedal that was modified with the addition of a bracket. He was braking with the right foot pretty far to the left, so the movement of his hip was far from ideal. This cost some power when braking. Therefore, the engineers were looking for a solution that allows Alex to move his hip in the most natural and efficient way as possible when braking to make full use of the strength of his muscles. In addition, it was important that the brake pedal does not take up too much space, as there are also the pedals for Spengler and Glock, and their throttle should not move too far to the left compared to its usual position.

Because of this, BMW Motorsport came up with the solution of a pin attached to the brake pedal, which allows Zanardi to just slip his prosthetic leg onto the brake pedal. This pin solution has several advantages: it does not take up much space and offers a fixed connection between the brake pedal and Zanardi’s prosthetic leg. As Zanardi has only restricted control over his leg, it could happen that the foot moves to the side. This is not possible with the pin; it holds the leg fixed in its position. 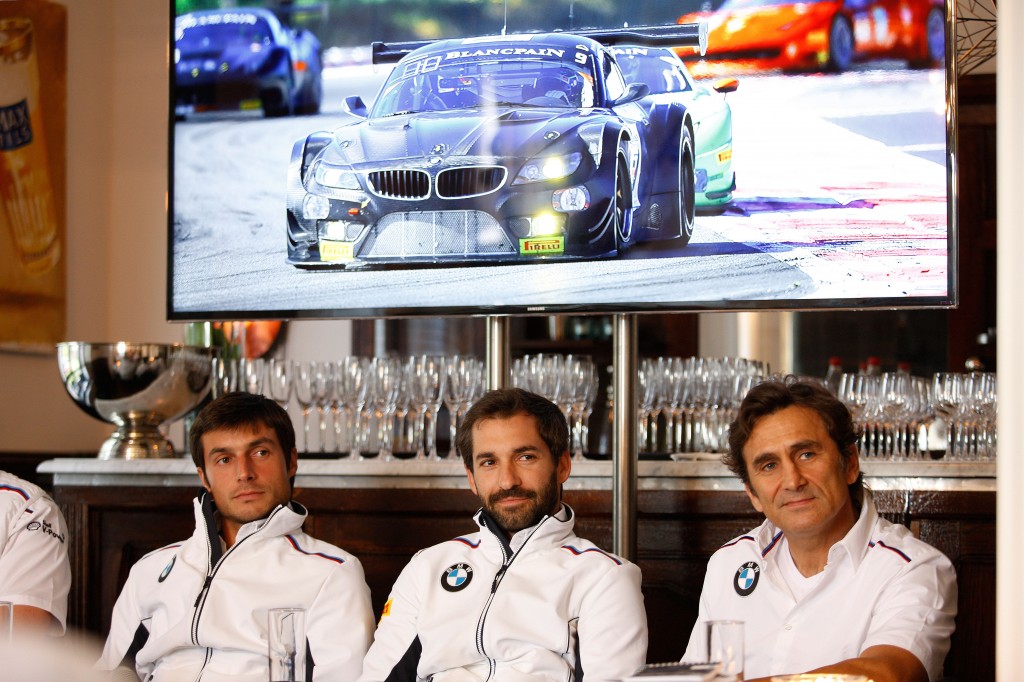 Also the prosthetic leg itself has been modified. The upper part, the femur, is Zanardi’s normal prosthesis. But he can adapt the lower part, the lower leg. For this, a special foot adapter for the lower part below the knee was developed. The foot is designed to fit on the pin on the pedal and is adjustable.

Next to the brake pedal a side divider was installed. This avoids Spengler or Glock accidently slipping over onto Zanardi’s brake pedal.

On the very left side of the pedal box, the clutch pedal was removed and instead a footrest was installed for Zanardi. This footrest is very important for Zanardi, as it gives him additional support for his left leg and, as a result, he has the full power to brake with his right leg.

The brake itself is activated by the brake pedal for Glock and Spengler. The two different brake pedals are connected. So when Zanardi pushes his pedal, the other one also goes down and activates the brake. Both brake pedals are moving simultaneously. Zanardi’s pedal is kept in position by a spring mechanism when he is not in the car. 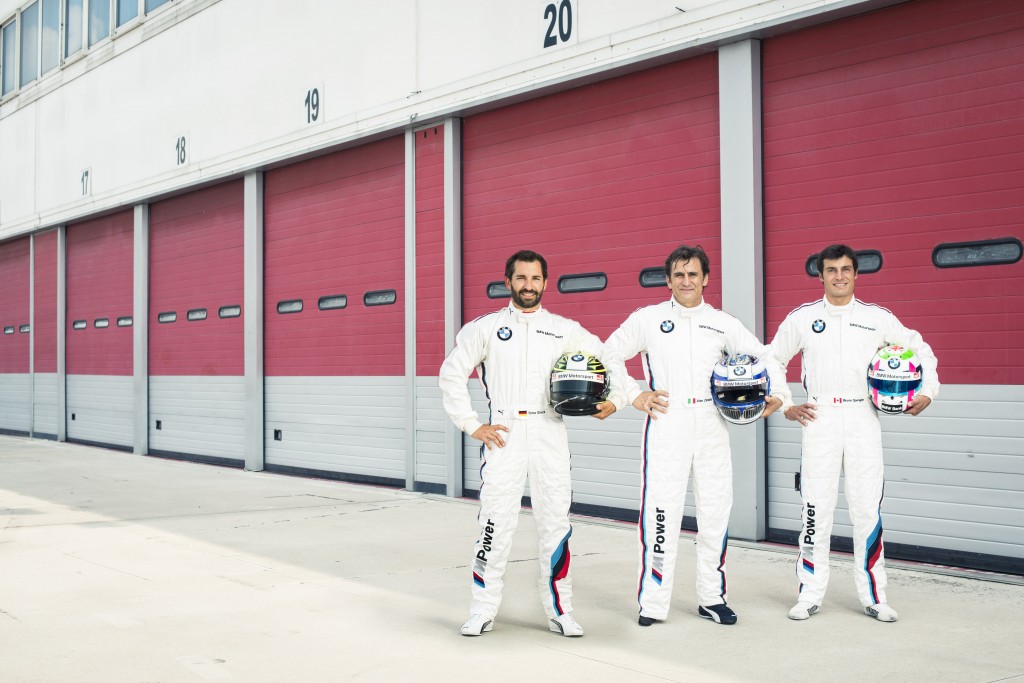 The BMW Motorsport engineers completely removed the clutch pedal from the pedal box and replaced it with a clutch-by-wire-sytem. The system is controlled with two clutch flippers, similar to the gearshift pedals, mounted to the steering wheel and to the dashboard. This also works perfectly for Glock and Spengler.

The steering wheel for Glock and Spengler is the standard BMW Z4 GT3 steering wheel, with the following modifications: the steering wheel is now connected by an external cable and the manual clutch has been mounted on one side of the rear of the steering wheel. They can activate it with their hand and start moving again. The paddle shift is standard. Thanks to a black light, the markings are also visible in the dark without the driver being distracted. BMW Motorsport also uses this at other 24h-races.

Zanardi’s steering wheel is completely new, but it is based on the one he used last year. At the back it still has the throttle ring he uses to accelerate. However, the BMW Motorsport engineers did some fine-tuning in order to optimise this system.

Instead of shifting paddles on both sides he now just has a shifting system on the right side. While he is accelerating with the ring he can upshift with the rear paddle, and he downshifts with his thumb.

The buttons and switches on the steering wheel are standard, but some special features were added. Among these features is an LED stripe in the middle. The most important functions are not only shown on the dashboard, but also directly on the steering wheel, for example the shift lights. The positions of the buttons have been adjusted and optimised.

The complete steering wheel is lit from inside, so no black light is needed.

Last year, ROAL and Zanardi invested a lot of time working on the seat and found a solution which works perfectly for Zanardi. This was used as a base for this year. For Zanardi a carbon insert was built, which is firmly connected so it cannot move. The insert is lined and features a lumbar support, which he can pump up on the right side. The actual seat is the combination of the base and Alex’ insert. Based on that, the engineers built the seat insert for Timo and Bruno, so at the driver change they just need to put their insert onto the seat.

The BMW Motorsport engineers also optimised the seat’s position. Compared to last year, it is completely straight now and the seat has been moved back. A positive side effect is that this gives as much space as possible for the driver change.

Finally, due to the fact that Zanardi has no legs, his body temperature cannot be regulated normally. So his body needs to be cooled in the cockpit. Last year, he used a cooling system with dry ice, which is not the perfect solution for the requirements of a 24-hour race. So the engineers installed air conditioning as it is used in the BMW Z4 GTE.